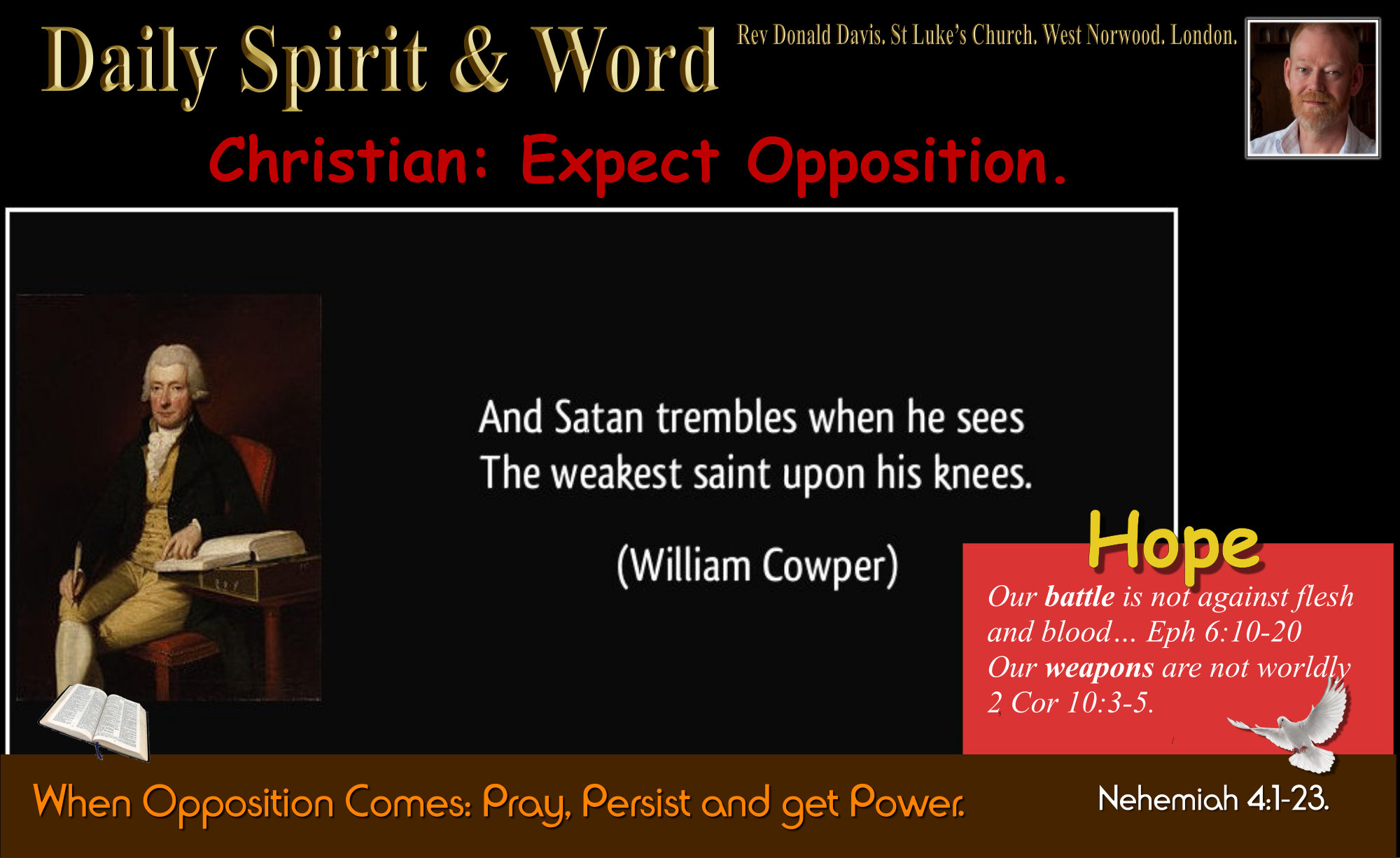 When the LORD calls you to do something for Him, expect opposition.

Good morning my friends, when you do a good work for the LORD you can expect opposition. If you are of the world, the world will accept you as one of it’s own, but if you are a Citizen of Heaven, working for another KING, then this world and it’s king (Satan) can never accept you and you are going to be opposed, persecuted and sometimes martyred. However, far from being in a position of weakness and fear, we’re going to be encouraged today to see that we can be God’s awesome power of LOVE in this world.

Opposition comes in many forms, but how can we react to opposition, no matter what form or guise it come in?

Let us take Nehemiah as one of our examples of what to do when opposition comes, and we’ll look at what God’s Word tells us about persecution and opposition for Him and for the Gospel.

An Example of how to proceed when your work for the LORD is opposed, ridiculed or hindered.

Nehemiah 4:1-23 (NIV)
1  When Sanballat heard that we were rebuilding the wall, he became angry and was greatly incensed. He ridiculed the Jews,
2  and in the presence of his associates and the army of Samaria, he said, “What are those feeble Jews doing? Will they restore their wall? Will they offer sacrifices? Will they finish in a day? Can they bring the stones back to life from those heaps of rubble—burned as they are?”
3  Tobiah the Ammonite, who was at his side, said, “What they are building—if even a fox climbed up on it, he would break down their wall of stones!”
4  Hear us, O our God, for we are despised. Turn their insults back on their own heads. Give them over as plunder in a land of captivity.
5  Do not cover up their guilt or blot out their sins from your sight, for they have thrown insults in the face of the builders.
6  So we rebuilt the wall till all of it reached half its height, for the people worked with all their heart.
7  But when Sanballat, Tobiah, the Arabs, the Ammonites and the men of Ashdod heard that the repairs to Jerusalem’s walls had gone ahead and that the gaps were being closed, they were very angry.
8  They all plotted together to come and fight against Jerusalem and stir up trouble against it.
9  But we prayed to our God and posted a guard day and night to meet this threat.
10  Meanwhile, the people in Judah said, “The strength of the labourers is giving out, and there is so much rubble that we cannot rebuild the wall.”
11  Also our enemies said, “Before they know it or see us, we will be right there among them and will kill them and put an end to the work.”
12  Then the Jews who lived near them came and told us ten times over, “Wherever you turn, they will attack us.”
13  Therefore I stationed some of the people behind the lowest points of the wall at the exposed places, posting them by families, with their swords, spears and bows.
14  After I looked things over, I stood up and said to the nobles, the officials and the rest of the people, “Don’t be afraid of them. Remember the Lord, who is great and awesome, and fight for your brothers, your sons and your daughters, your wives and your homes.”
15  When our enemies heard that we were aware of their plot and that God had frustrated it, we all returned to the wall, each to his own work.
16  From that day on, half of my men did the work, while the other half were equipped with spears, shields, bows and armour. The officers posted themselves behind all the people of Judah
17  who were building the wall. Those who carried materials did their work with one hand and held a weapon in the other,
18  and each of the builders wore his sword at his side as he worked. But the man who sounded the trumpet stayed with me.
19  Then I said to the nobles, the officials and the rest of the people, “The work is extensive and spread out, and we are widely separated from each other along the wall.
20  Wherever you hear the sound of the trumpet, join us there. Our God will fight for us!”
21  So we continued the work with half the men holding spears, from the first light of dawn till the stars came out.
22  At that time I also said to the people, “Have every man and his helper stay inside Jerusalem at night, so that they can serve us as guards by night and workmen by day.”
23  Neither I nor my brothers nor my men nor the guards with me took off our clothes; each had his weapon, even when he went for water.

When you get busy for God, opposition will inevitably raise its ugly head. So no matter how GOOD the thing that you are doing is; be it a service for the poor people of this world or proclaiming the Good News of Jesus or taking a moral stand. Like Nehemiah discovered, when you do something for the LORD, the world (influenced by Satan) hates it with a vengeance, and will oppose you. However, they are not really opposing you, they are coming against your God, who’s called you to that task.

But we must bear in mind what it is that’s driving any form of opposition:

We must not resort to worldly ways of reacting to opposition:

2 Corinthians 10:3-5 (NIV)
3  For though we live in the world, we do not wage war as the world does.
4  The weapons we fight with are not the weapons of the world. On the contrary, they have divine power to demolish strongholds.
5  We demolish arguments and every pretension that sets itself up against the knowledge of God, and we take captive every thought to make it obedient to Christ.

So how should we react to opposition?

Who was Nehemiah? His name means “the comfort of Jehovah.” His purpose and calling by the LORD really was a worthy one; He was instructed by the LORD to reconstruct the walls of the city of Jerusalem and in the process to rebuild the faith of the people of Israel. Yet, as soon as he began, Nehemiah was confronted by the dreaded opposition. So don’t be surprised by opposition, instead; expect it.

When you get busy for God and the expected opposition comes, the first ingredient that will lead to success is PRAYER. “But we prayed to our God,” the Bible says (Nehemiah 4:9). Prayer was a key ingredient in Nehemiah’s spiritual life (1:4). When OPPOSITION came, Nehemiah looked up to Heaven first taking captive those opponents of God’s word with Spiritual weapons, before he persisted in the rebuilding of Jerusalem’s wall.

When you get busy for God and opposition comes, the second ingredient that will lead to success is PERSISTENCE. Prayer is not a substitute for working at what you’ve been called to do. So often people will retreat and just pray, but you’ve been called to more than prayer. Instead, know that PRAYER preceeds PERSISTENCE. When opposition comes don’t just carry on regardless, get down to prayer first and then carry on regardless. PRAYER is a PRELUDE to PERSISTENCE. For the God’s Word says; “Nehemiah took their thoughts captive (He used Spiritual Weapons) Nehemiah 4:4.   “…the people worked with all their heart.” (Nehemiah 4:6).

When you get busy for God and opposition comes, the third ingredient that will lead to your spiritual success is THE POWER OF HEAVEN. When confronted by the fear of the people, the fear of man, the fear of looking like a fool, the fear of failure; then Nehemiah 4:14 says that Nehemiah arose and spoke to the people about the power of God, and about the purpose of their work. When we are reminded of the purpose to which God has called us, and the power with which to accomplish that purpose, then we will be encouraged to move on toward the completion of our task.

So simply remind yourself of God’s calling and purposes: To share the Gospel, to help the poor, to cure the sick, to make disciples, to follow the teachings of Jesus, to live by them and if need be to die for them. Remember also the POWER of HEAVEN, the Weapons are not worldly, we take our stand against opposition with the Armour of God in place: Ephesians 6:10-20. And bear in mind; Jesus is with you always. Holy Spirit has filled you and equipped you for this work for the LORD.

When you know and experience the POWER you will keep going at what He’s called you to do.

Yes my friends, you will experience all kinds of opposition to what you’ve been called to do by the LORD: Demonic and Worldly OPPOSITION: Expect it, and react like Nehemiah the prophet and the LORD Jesus Christ.

Through prayer and persistence with the power of Heaven, you will be able to overcome any of those troubling opponents.

As one great preacher has said,

… Your troubles can be turned into triumphs.

“Satan trembles when he sees, the weakest Christian upon his knees.”

Have a blessed Saturday with Jesus.

For most people it’s a rest day, to be with family and friends, but remember Jesus is your BEST BFF (Best Friend Forever).

So make and appointment and keep it with Him first. Then no matter what happens today, you’ll be ready. Amen!