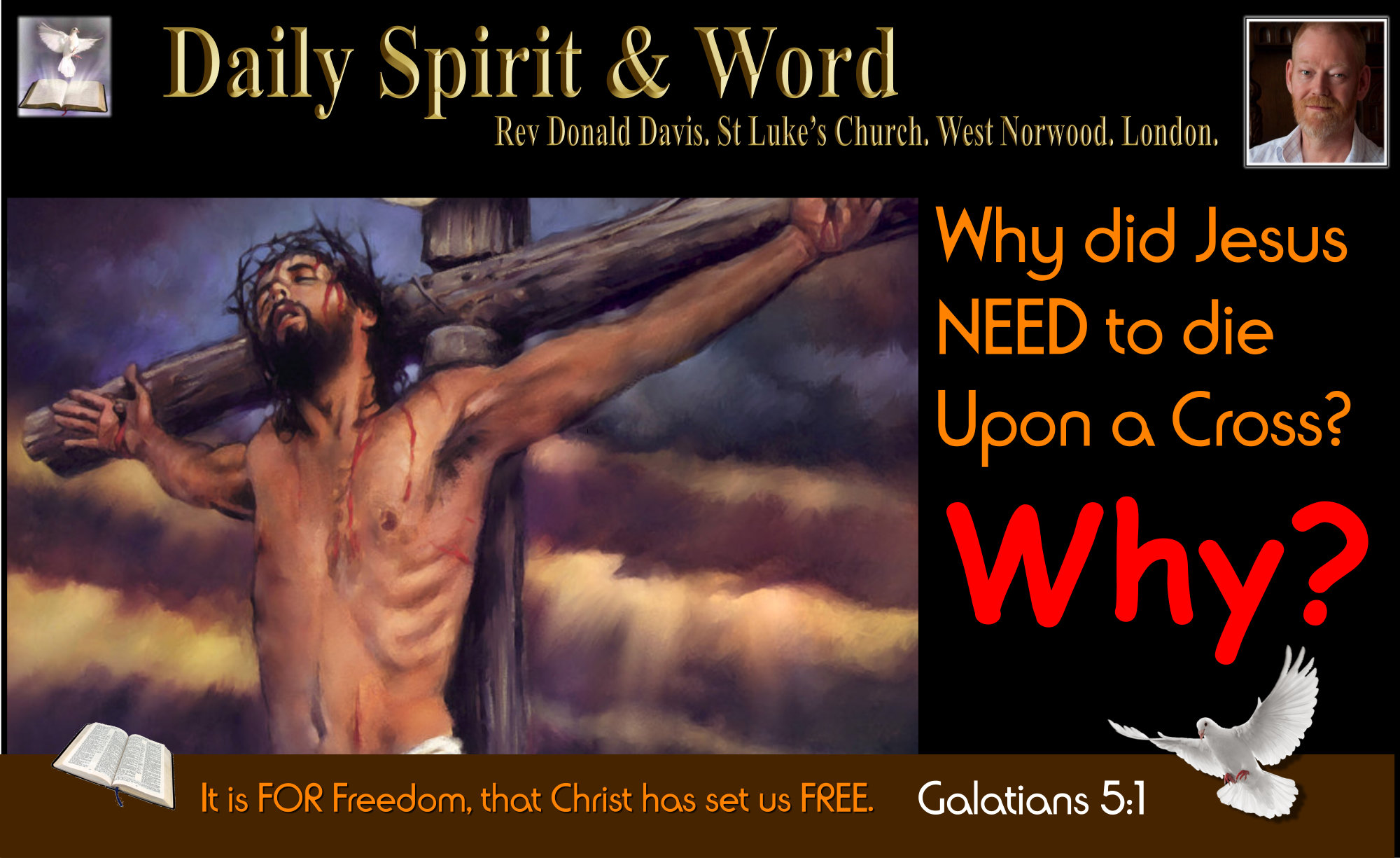 “It is for freedom that Christ has set us free”

If we submit to Christ as Lord and turn from sin and experience His Salvation: Then we’ll escape and be set completely free.

Galatians 5:1 (NIV) “It is for freedom that Christ has set us free. Stand firm, then, and do not let yourselves be burdened again by a yoke of slavery.”

Enslaved: Yesterday, before we set out on the Good Friday Walk of Witness, I arrived early at church to pick up the crosses we carry and was waiting for David and John who’d agreed to carry them. As I waited there was a man who’d arrived to get some food at the Foodbank. He was a regular visitor, but I’d never shared the Gospel with him before. We’d been chatting about lots of normal stuff, the weather, the sunshine, winter and Springtime being his favourite time of the year. I asked him if he knew what day it was. He looked puzzled and said, “It’s Friday?” I said, “Yes but what Friday?” He said, “Foodbank Friday”… We both laughed our loud. I asked, “Graham, were you aware that today is one of the most holy days in the Christian year? It’s called Good Friday, do you know why?” He answered, “Oh yes, that’s when Jesus died on the Cross”…
“Do you know why Jesus died Graham?” I asked. He said, “I don’t know, it was a cruel thing to do, because I know that Jesus was a good man”…
I said, “Jesus died for you and me Graham, He took our place on the Cross, but do you know why?” He said, “I don’t know why Jesus would die for me”…
Then I took Graham through God’s Commandments one by one, it was at that point in our conversation that David arrived. Then we both continued to witness to Graham. I think I was on the 3rd Commandment by that stage. “Blasphemy: Taking the Lord’s Holy Name and using it as a swear word: Saying OMG or Jesus in a conversation when you are not praying to Him, but using it instead of a swear word”

Do you know what Graham said?, “I’d never do that, I’d never Blaspheme Jesus or God”… He was blissfully unaware that he’d been doing it from the moment that I met him and began talking with him. So I gently pointed it out to him and he was genuinely shocked. He said, “So I’ve been blaspheming when I say Jesus Christ or Jesus H Christ or Jesus?” I said, “Yes Graham, it’s using God’s Name in an unholy way”…

You know some people, trying to be nice, think that saying “Jesus Christ” or “Jesus” is better than saying F—k or Sh-t… it’s less offensive and you can get away with it, but it’s taking the Holy Name of God and using it as a swear word. It’s taking the God who gave you life and bringing Him down to an disgusting level of a dirty swear word. That’s why it’s Blasphemy. You know that Commandment? Exodus 20:7 (NIV) “You shall not misuse the name of the LORD your God, for the LORD will not hold anyone guiltless who misuses his name. “

David and I led Graham to an awareness of his need for Jesus Christ on Good Friday. We encouraged him to turn from his sin in repentance, letting go of sin and trusting in Jesus, and be saved from God’s wrath to come. To trust in Jesus and His love, when He gave His life upon the Cross, taking our place and dying for us. Graham thanks us for showing him why Jesus needed to die upon the Cross. Yesterday was a Good Friday for Graham.

We then picked up the Crosses and walked to Tulse Hill to meet everyone for the walk of witness. It brought fresh meaning to Jesus statement and command, “Take up your Cross daily and follow Me”…

Have an AWESOME Easter Weekend.
Note: Graham was enslaved by sin and he didn’t even realise it. There are so many, countless thousands, who are unaware of their need of Jesus Christ. They are trapped in all kinds of sin and wickedness that offends a Holy and Righteous God, they are storing up His wrath for the Day of Judgement. They don’t know why Jesus needed to die upon the Cross, but it was for our FREEDOM that Christ has set us free. Jesus wants to set people free today. So let’s be prepared at all times to share the Greatest News they are ever likely to hear, they’ll thank you when they meet you in Heaven.

Praise the LORD for Gospel conversations.

Praise the LORD for Good Friday

What a walk of witness too, so many came from all over West Norwood, Dulwhich and Tulse Hill. I’m praying now that next year we’ll have to close off the road because of the multitude of souls walking for Jesus. Amen!
Don.