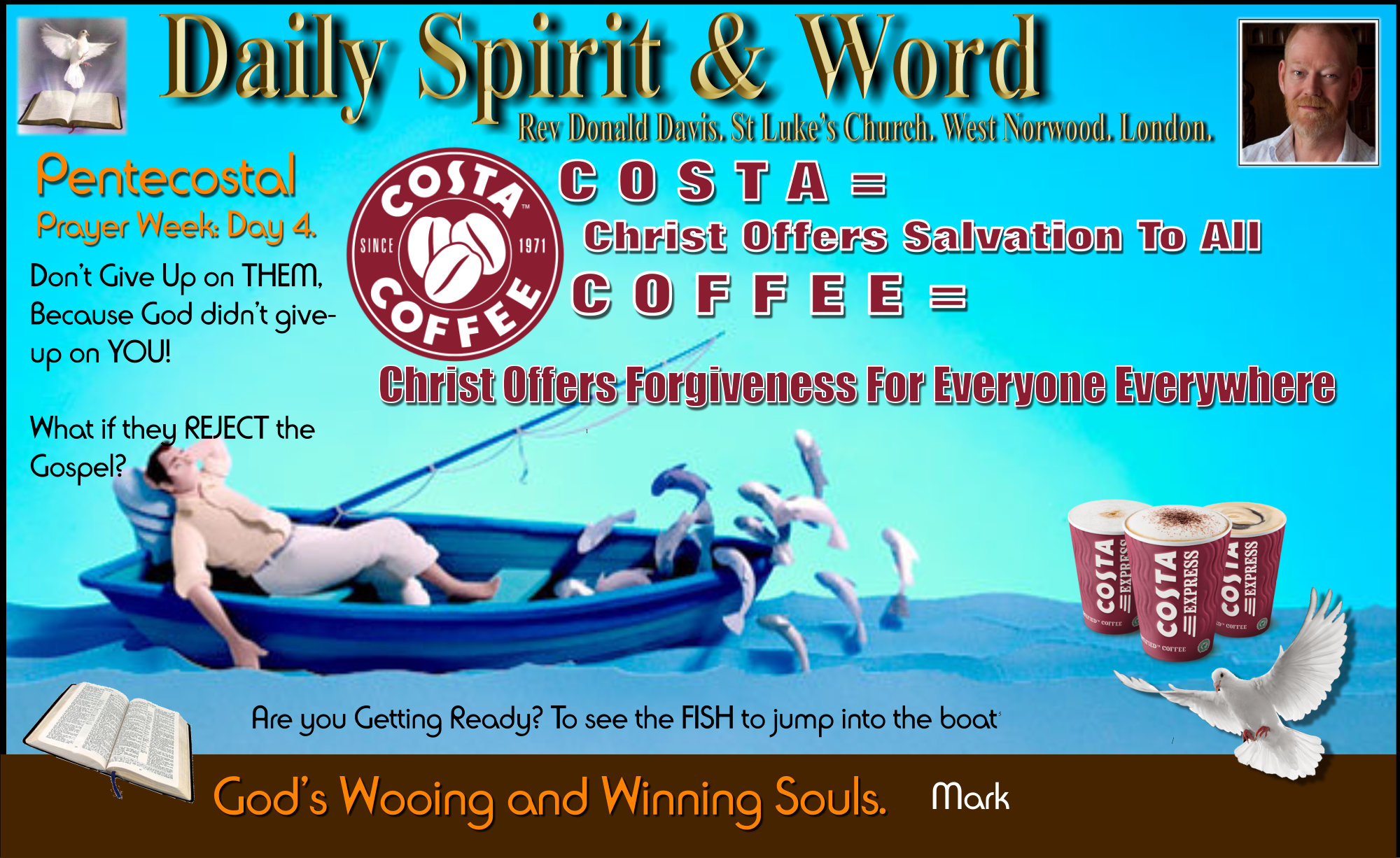 Daily Spirit & Word: 740: When The Message Is Rejected.

Good morning my friends, we’ve been chatting all we about National Evangelisation, taking the Gospel in obedience to Jesus command to “Go”, to all the people in your OIKOS (Remember OIKOS is all the people who know that you are a follower of Jesus Christ, a Disciple). However, what happens or what do we do about the people who reject the Gospel? When we’ve been praying for them and we finally get the courage to share with them, what happens if they say “No” or “I’m just not interested”…

Quick Answer: LOVE them even more.

First pray for them again. Go back to your Heavenly Father and talk to Him about them.

It’s amazing when you go back and review with the LORD all that you’ve been saying and doing to win your loved ones to Jesus. Why? Because in talking it over sometimes the LORD gives you words of knowledge and insight about; Himself, your approach, about them as people and about yourself as well.

Then go back and check out the Scriptures and ask yourself, “What does the LORD want me to do now?”

Why? Because you’ll discover afresh God’s Heart, the Father’s Heart, for everyone who doesn’t know Him yet. You’ll be encouraged to know the LORD still wants them to be saved. Think about Noah building his Ark, the people laughing at him, the mocking he endured as year after year as he built his boat on the hill. Then when the LORD sent the rain, who got into the Ark with Noah? It was his son’s and their wives, his whole HOUSEHOLD (OIKOS). Throughout the Bible you’ll discover the LORD’S HEART for the extended family of those who LOVE HIM. How His blessings flow from generation to generation of those who put their trust in the LORD. The same is true of many of the great people of God in the Bible; Jacob, Joseph in Egypt his whole family saved, Abraham, etc… God’s HEART is to SAVE your extended family and those who know you well.

Next: Be encouraged, because very few people accept the Gospel the first time they hear it.

Think about how many times you had to hear about Jesus before you eventually; believed in Him, felt remorse for your sins and repented of your old way of life and received the Lord Jesus as Saviour. When you consider how long it took you, how stubborn you were, how you had to have your foolish thinking challenged and changed before you said “YES” to Jesus, well then it makes it easier to handle their initial or repeated rejection of the Good News. Don’t give up, because God didn’t give up on you.

Don’t Give Up, Because God Didn’t Give-Up on YOU!

Next: When the Gospel is NOT Good News for some people:

For some people, God’s Good News of the Gospel is not good news for them, because many sinners love their life of sin, they can’t imagine what life would be like without it and believe they’d feel hemmed-in, trapped, curtailed from enjoying life as much. So it’s no wonder they don’t surrender to Jesus immediately. It might take them a few days, months or even years to realise that the sinful lifestyle (life without God) is empty and doesn’t really bring them lasting satisfaction in their soul, also that rejection of God’s offer of new life will begin to plague them. Their Conscience springs to life when you’ve shared about Jesus and it does so every time you are with them, because you become a living Gospel presentation every time they meet you. It’s as if you’re preaching to their Conscience just by being there. They will be reminded of the Good News when they see you, they will be reminded how they’ve chosen to reject Jesus.

So don’t feel defeated or discouraged by their initial or repeated rejection of Jesus and His offer of New Life.

The Wearing Down Process:

It take years for a river to form a canyon.

My Father In-Law: Called it the wearing down process.

My wife, when she wanted something from her father, didn’t ask just once. She asked him again and again, giving more and more reasons why she should have what she wanted. She was an expert at wrangling things out of her father. He said, “Julie can wrap me around her little finger” Why? Because she knew her daddy loved her. She knew her father’s heart. She knew it brought him great pleasure to see her happy. So my wife learned the wearing-down-process.

Your friends, can be worn-down by God too. They’ll be wooed by the Gospel. They’ll be won over time because they’ll eventually see, know, recognise that Jesus Gospel is REAL, Genuine and True. However, please remember, time is short, we don’t know how long we’ve got left on this earth, their eternal destiny is at stake, we don’t want anyone in our OIKOS to die without trusting in Jesus.

Too many come to Jesus thoughtlessly, i.e. not knowing enough, they don’t put their faith upon the ROCK, but on the shifting sands of their feelings. They’ll remain for only a short time, because they’ve not really trusted in the Lord Jesus, but just an idea of what trusting Jesus would be like.

Too many come too quickly and don’t really leave behind their life of sin. They want to have a foot in both camps; the Kingdom of God and the kingdom of Satan. Remember Jesus said, “You cannot serve both God and mammon”… Why? “Because you’ll love the one and hate the other”…

Matthew 6:19-24 (NIV)
19 “Do not store up for yourselves treasures on earth, where moth and rust destroy, and where thieves break in and steal.
20  But store up for yourselves treasures in heaven, where moth and rust do not destroy, and where thieves do not break in and steal.
21  For where your treasure is, there your heart will be also.
22  “The eye is the lamp of the body. If your eyes are good, your whole body will be full of light.
23  But if your eyes are bad, your whole body will be full of darkness. If then the light within you is darkness, how great is that darkness!
24  “No-one can serve two masters. Either he will hate the one and love the other, or he will be devoted to the one and despise the other. You cannot serve both God and Money.

The meaning of Jesus’ words have been debated, but it’s obvious really, we can’t serve God and SIN. One or the other will be our Master, we cannot LOVE both at the same time. Repent of your sins and turn afresh to Jesus Christ to be forgiven, cleansed, renewed. Seek the fullness of Holy Spirit to enable you to say “NO!” to sin again in your life.

Pray always for your friends and family in your OIKOS who’ve rejected Jesus offer of new life and His gift of Eternal life.

Be blessed and encouraged to keep sharing Jesus, again and again and again. God is patient, not wanting anyone to perish, but everyone to come to repentance.

The Parable of The Sower:

The KEY to unlocking every parable of Jesus.

Mark 4:1-20 (NIV)
1  Again Jesus began to teach by the lake. The crowd that gathered round him was so large that he got into a boat and sat in it out on the lake, while all the people were along the shore at the water’s edge.
2  He taught them many things by parables, and in his teaching said:
3  “Listen! A farmer went out to sow his seed.
4  As he was scattering the seed, some fell along the path, and the birds came and ate it up.
5  Some fell on rocky places, where it did not have much soil. It sprang up quickly, because the soil was shallow.
6  But when the sun came up, the plants were scorched, and they withered because they had no root.
7  Other seed fell among thorns, which grew up and choked the plants, so that they did not bear grain.
8  Still other seed fell on good soil. It came up, grew and produced a crop, multiplying thirty, sixty, or even a hundred times.”
9  Then Jesus said, “He who has ears to hear, let him hear.”
10  When he was alone, the Twelve and the others around him asked him about the parables.
11  He told them, “The secret of the kingdom of God has been given to you. But to those on the outside everything is said in parables
12  so that, ” ‘they may be ever seeing but never perceiving, and ever hearing but never understanding; otherwise they might turn and be forgiven!’ ”
13  Then Jesus said to them, “Don’t you understand this parable? How then will you understand any parable?
14  The farmer sows the word.
15  Some people are like seed along the path, where the word is sown. As soon as they hear it, Satan comes and takes away the word that was sown in them.
16  Others, like seed sown on rocky places, hear the word and at once receive it with joy.
17  But since they have no root, they last only a short time. When trouble or persecution comes because of the word, they quickly fall away.
18  Still others, like seed sown among thorns, hear the word; 19  but the worries of this life, the deceitfulness of wealth and the desires for other things come in and choke the word, making it unfruitful.
20  Others, like seed sown on good soil, hear the word, accept it, and produce a crop—thirty, sixty or even a hundred times what was sown.”
We all want to think of ourselves as “Good soil hearers”… Are we producing a crop of seeds to plant again in the hearts of others? When we begin to share (plant the seed) what we’ve received, then we become the Good Soil Hearers.