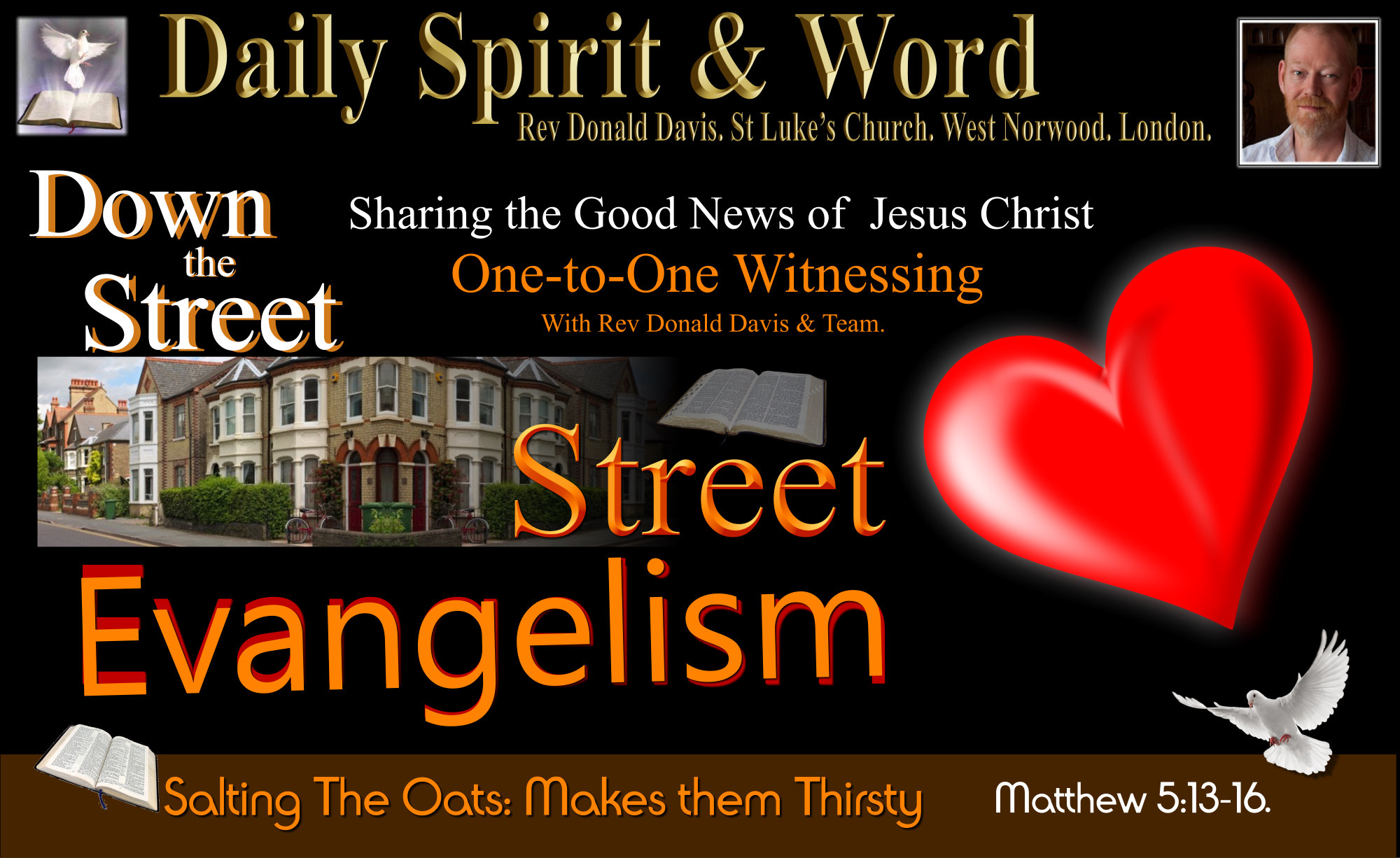 When Sharing The Good News: Isn’t Received Like Good News.

But we spread the SALT and shine the LIGHT anyway.

And Return With Joy

Matthew 5:13-16 (NIV)
13 “You are the salt of the earth. But if the salt loses its saltiness, how can it be made salty again? It is no longer good for anything, except to be thrown out and trampled by men.
14  “You are the light of the world. A city on a hill cannot be hidden.
15  Neither do people light a lamp and put it under a bowl. Instead they put it on its stand, and it gives light to everyone in the house.
16  In the same way, let your light shine before men, that they may see your good deeds and praise your Father in heaven.

Good morning my friends, I love to tell you that our Street Evangelism last night was easy, that we saw lots of people coming to Jesus, that everyone we talked with welcomed our message, but it wasn’t like that last night. No, it was tough with a capital ‘T’…

However, it was amazing, it’s like the LORD Jesus has been preparing us for last night from the beginning, because many of the people we chatted with were opposed to the Message of Jesus Christ. We didn’t get into arguments, but we did debate. It was done with humility, great humour and sometimes seriousness.

To say, “last night’s street witnessing was challenging”, would be an understatement.

However, we came back praising the Lord, because we’d planted the life transforming Gospel into the hearts of almost every one of those wonderful souls, apart from the bi-polar lady who just didn’t want to talk at all, we finished off with a great response to the Good News with an amazing lady and her colleague from Patty King.

Well, we most certainly can make anyone think: A horse who refuses to drink water can be a bit awkward for the man who needs to have his cart pulled. In order for a horse to be any use it needs to take on water, lots of it. So you’d put SALT into His Oats. Once a horse gets a mouthful of tasty, salty oats, just watch him lapping up that cool clear water.

That’s what we can do with an Atheist as well, put some LIVING SALT (Gospel Words) into his mind, to make him think, to let his God given Conscience go and do it’s work in bringing conviction of sin, leading to repentance and trust in the only Saviour of mankind. Then once he’s come to Jesus, he’ll be lapping up the life giving water of life from the Holy Spirit and drinking in deeply from the eternal fountain. He’ll discover satisfaction for his eternal soul.

Remember Jesus told us to be SALT and LIGHT… God loves Atheists, unbelievers, Satanists, bi-polar, Jesus rejecting people just as much as the Saint who bends the knee to the Saviour.

God doesn’t want a single soul to perish in Hell; LOVE, that’s our motivation for going out and engaging those challenging folks.

God, by His Holy Spirit and the Gospel of His One and ONLY Son, Jesus Christ, is PULLING people from the flames licking at their feet. His desire is that none perish in hell, but everyone to come to repentance. In order for them to come to the point of repentance though, they need to know HOW they’ve offended God and what it is that’s keeping them out of Heaven. Because, most people, even ardent Atheists, want to go to Heaven, if it exists. To show people HOW they’ve offended God to such a degree that they’ll be banished from Heaven forever, it takes patience, lots of it, kindness in great measure, gentleness, joy, love, persuasion, reasoning, more love, humility, respect and boldness. We’re not selling a message, we’re not salesmen with a neat set of pat answers. Each person is an individual, with their own personal experiences, questions, thoughts and reasons for not even thinking about Jesus or eternity. The vast majority are heading for hell in blissful ignorance of their fate. No wonder Jesus said, “The fields are ripe unto harvest, but the labourers are few”. It’s NOT easy, but it is such a JOY to be able to bring some light into their darkness. To give a little HOPE in the midst of hopelessness.

Finishing With An Encouraging Encounter:

The face of the lady from Patty King who heard the Good News last night was a picture, because when I asked, “Does that make sense?” She said, “Yes it does?” She’d been arguing that God would just forgive people anyway, but she didn’t want “horrible people” like; murderers, rapists, child-molesters, etc, to go to Heaven. Her problem was that she thought she was good and really bad people were much worse than her. She was measuring her goodness with what she perceived as their badness, thinking she’d be acceptable to God.

Well after some banter and joking and shedding some light on the true condition of their souls, they still thought their sin wasn’t as bad as others.

I said, “Think about it like this, telling lies is a sin right?” She nodded, “A single lie will keep us out of heaven, because it contaminates us” She didn’t think lying was such a bad sin as to keep a person out of heaven. So I explained, “You work in Patty King, imagine taking a delivery of chicken and one of the batch is smelling rotten, would you put that in the fridge beside the good pieces of chicken?” She said, “No, I’d throw it out”… I explained “that’s what God will do with any soul coming to Him, desiring to get into Heaven, if they’ve been contaminated with any sin; lying, stealing, lust (adultery) hatred (murder), etc”..  “He cannot let them in, because they’d contaminate His holy heaven”… Once she got it, she was open to hearing what God has done so that none should perish in Hell. So when I asked that question, “Dos that make sense?” The nod of her head was a wonderful picture. She said, “Yes it does”.

Tomorrow: We’ll be thinking about; Getting Ready For Pentecost. The Coming of The Holy Spirit.

Today: Always be prepared to give a reason for the HOPE that is in you.

Be filled with God’s LOVE for everyone, do good and share the Good News.

Remember to stay close to Jesus (John 15) and Be filled afresh with God The Holy Spirit, and Praise your Heavenly Father in worship and song.