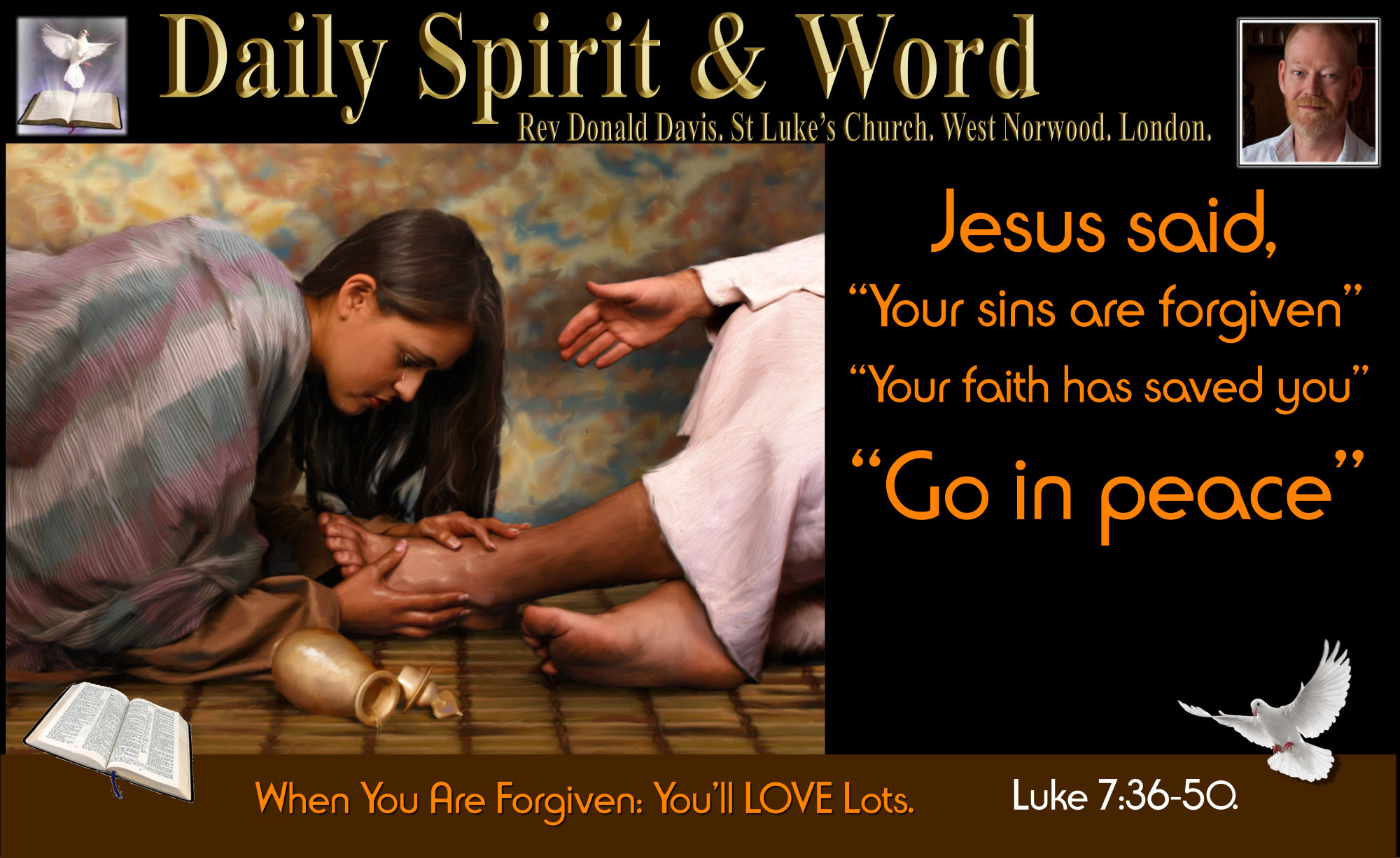 The Woman With The Alabaster Jar

Good morning my friends, you know I said yesterday that it was my day off, well in the evening I had to attend a School Governor’s Meeting at St Luke’s School. The Head of School shared about a certain class that were being challenged to make progress and try harder. On the wall in huge letters it reads, “With Jesus Help We Can”… she pointed out the words and encouraged the class to ask for the Lord to help them understand. She reported, “That class is making progress, the children’s faces light up and they actually ask Jesus for help”…  My friends, when we see Jesus at work like that in our schools and in the lives of children in London today it is an amazing encouragment. It also makes me want to turn afresh to the Lord Jesus in faith today.

Today’s passage comes from Luke’s Gospel and he shares the account of how a sinful woman finds forgiveness in Jesus, but what is it about Jesus in this story that encourages you?

Luke 7:36-50 (NIV)
36 Now one of the Pharisees invited Jesus to have dinner with him, so he went to the Pharisee’s house and reclined at the table.
37  When a woman who had lived a sinful life in that town learned that Jesus was eating at the Pharisee’s house, she brought an alabaster jar of perfume, 38  and as she stood behind him at his feet weeping, she began to wet his feet with her tears. Then she wiped them with her hair, kissed them and poured perfume on them.
39  When the Pharisee who had invited him saw this, he said to himself, “If this man were a prophet, he would know who is touching him and what kind of woman she is—that she is a sinner.”
40  Jesus answered him, “Simon, I have something to tell you.” “Tell me, teacher,” he said.
41  “Two men owed money to a certain money-lender. One owed him five hundred denarii, and the other fifty.
42  Neither of them had the money to pay him back, so he cancelled the debts of both. Now which of them will love him more?”
43  Simon replied, “I suppose the one who had the bigger debt cancelled.” “You have judged correctly,” Jesus said.
44  Then he turned towards the woman and said to Simon, “Do you see this woman? I came into your house. You did not give me any water for my feet, but she wet my feet with her tears and wiped them with her hair.
45  You did not give me a kiss, but this woman, from the time I entered, has not stopped kissing my feet.
46  You did not put oil on my head, but she has poured perfume on my feet.
47  Therefore, I tell you, her many sins have been forgiven—for she loved much. But he who has been forgiven little loves little.”
48  Then Jesus said to her, “Your sins are forgiven.”
49  The other guests began to say among themselves, “Who is this who even forgives sins?”
50  Jesus said to the woman, “Your faith has saved you; go in peace.”
First The Pharisee’s Hospitality:

At first you think this Pharisee is being kind to Jesus, inviting him to dinner, but we soon discover that he didn’t even perform the customary greeting or extend the normal welcome. He didn’t greet Jesus with a kiss, he didn’t wash Jesus’ feet, he didn’t anoint Jesus with oil. All of these were normal practice for an honoured guest. It was just customary good manners. It’s a bit like offering someone a cup of tea and a little snack when they come to visit you in London.  What does that tell you about the Pharisee? It reveals that his motives for inviting Jesus to dinner were NOT to honour Him. So we’re left wondering why on earth the Pharisee invited Jesus in the first place.

A Rabbi would be welcomed with a customary kiss.

A Rabbi would have his feet washed, because in those days the roads were dusty and feet would get dirty. The cool water on the feet would also bring comfort.

A Rabbi would also be anointed with some kind of perfume; normally rose water.

My friends, when you follow Jesus Christ today, He comes with you wherever you go. That’s why Jesus said, “Whoever welcomes one of my Disciples, welcomes me”… He is with us, but how do we honour Jesus’ presence? Does his presence make us weep over our sinfulness? Does his presence make us want to honour him and serve him, like the sinful woman did?

Let’s see what she did for Jesus that day.

Though she was a sinner she did everything the host of the house should have done to honour him. It’s strange that a supposed ‘righteous’ man, the Pharisee, didn’t see the need to honour Jesus with the normal good manners, but the SINNER didn’t stop honouring him from the moment she arrived.

The Pharisee’s Attitude Towards The Sinful Woman and Jesus.

Luke 7:39  When the Pharisee who had invited him saw this, he said to himself, “If this man were a prophet, he would know who is touching him and what kind of woman she is—that she is a sinner.”

In those days if a Pharisee was touched by a sinner or a sin contaminated person, then he’d be ritually unclean, so they avoided being touched. Remember the story of the Good Samaritan how the Priest and Levite avoided helping the wounded man, for fear of being made unclean. That’s not what God meant when He said we should avoid sin, whenever we can help someone, we should. Even the most sinful person can be given hope of a changed life. But according to the Pharisees, once a sinner, always a sinner. They looked down on sinful people and avoided all contact with them. Even today some strict sects of Jews will not touch anyone who is not a Jew. They view them as sinners or unclean. So the Pharisee is condemning of Jesus as well as having a stand-off attitude towards the sinful woman. He’s questioning Jesus prophetic anointing simply because Jesus is allowing himself to be touched by a supposed sinner. Simon didn’t know if Jesus had already forgiven this woman.

You can almost hear the condemnation: “She is a SINNER”… i.e. in the mind of the Pharisee, there was no hope for the woman, she was a sinner once and she’ll always be that sinful woman.

He’s a wonderful example of how we should be towards those we KNOW are sinners. We cannot be like that Pharisee, because we know how much the Lord has also forgiven us. We too are sinners and we too need to be cleansed and forgiven.

That little story of Jesus about the debts being forgiven.

I love the way that Luke has recounted this meeting in the Pharisee’s house.

He sets the scene and right in the middle includes one of the most amazing and insightful teachings of Jesus.

Luke 7:41-42.
41  “Two men owed money to a certain money-lender. One owed him five hundred denarii, and the other fifty.
42  Neither of them had the money to pay him back, so he cancelled the debts of both. Now which of them will love him more?”

Five Hundred or Fifty: That’s an amazing difference. Of course the one who’s been let off the most debt is the one who’d be most appreciative. But you’d think that the one who’d been forgiven a little would also be a little bit grateful.

The Pharisee got it right, but then Jesus points out the sinful woman: She’s been doing for me Simon what you should have done. Imagine how Simon the Pharisee must have felt at that moment in time? Confronted and shown how wrong his own attitude was towards both the sinful woman and Jesus. I’ll bet he wanted to hide under his dinner table that day.

I don’t know if you’ve ever had that feeling coming upon you? I’ve had it a few times, when the Lord brings conviction, all you want to do is hide. I had it in church once, I was looking at other people and in my heart judging them. Then the Lord spoke to me, “Who are you to condemn anyone else, I’ve forgiven them, I’ve also forgiven you”…. I’ll never forget how embarrassed I was, my face went red, I bowed my head and closed my eyes and asked Jesus to forgive me. I was reminded of just how much I’d been forgiven and that it was my own sins that put the nails in Jesus’ hands and feet, and the spear into his side. It was my sins that thrust the crown of thorns upon His head.

The the most amazing pronouncement from Jesus lips:

“Your sins are forgiven.” and “Your faith has saved you; go in peace.”

The woman’s actions towards Jesus demonstrated her faith. She believed that Jesus was the one good, righteous, religious, Rabbi who wouldn’t condemn her, she came to Jesus and cried at his feet and ends up being forgiven and more “go in peace”. There’s a deep peace we experience when we’ve been cleansed and forgiven by the Lord Jesus.

I’ve been a Christian since 1984, but I feel Jesus is asking me afresh this morning, “Donald, How’s your LOVE for Me?”

I think about that poor woman who was so aware of her sinful condition and probably reminded about it constantly by those who knew all about her life. No wonder she was so filled with faith when she encountered Jesus and wanted to do anything she could for him.

The story doesn’t tell us when Jesus forgave the woman. It might have been before he went to the Pharisees house to have dinner that day and she later discovered where Jesus was and wanted to do something special for Him. We don’t know if it was at the house she was forgiven, but we know she was a sinner, she acted in faith and was rewarded by being forgiven and sent away in peace.

I think how much I love Jesus will be determined by how much I know I’ve been forgiven and the cost of my forgiveness. Jesus gave His life so that I could be clean. When I experience the cleansing and washing away of my sins it produces within me an inward gratitude and inexpressible joy, it means that I want to serve the Lord Jesus and give so much, that like the woman with the expensive alabaster jar, I’ll pour out my life and what I’ve been given in His service. Oh LORD Jesus, I love You.

FAITH that expresses itself in LOVE towards Jesus.

When we’ve been forgiven so much by Jesus, we’ll LOVE Him lots too.

Notice Jesus words again; “Your sins are forgiven.” and “Your faith has saved you; go in peace.”

Jesus gives us FAITH to believe, then rewards us when we use the FAITH we’ve been given and gives us PEACE. That’s such Amazing Grace.

Finally, we’re left with the people questioning: “Who is this who even forgives sins?” The Jews knew that God alone can forgive sins. Jesus was God on earth, because we know too that ONLY God can forgive sin. But I’ve written enough for today 🙂

How much we love Jesus will be shown by how much we appreciate we’ve been forgiven by Him.

Hope you all have a fantastic Friday and a wonderful faith filled weekend with Jesus.