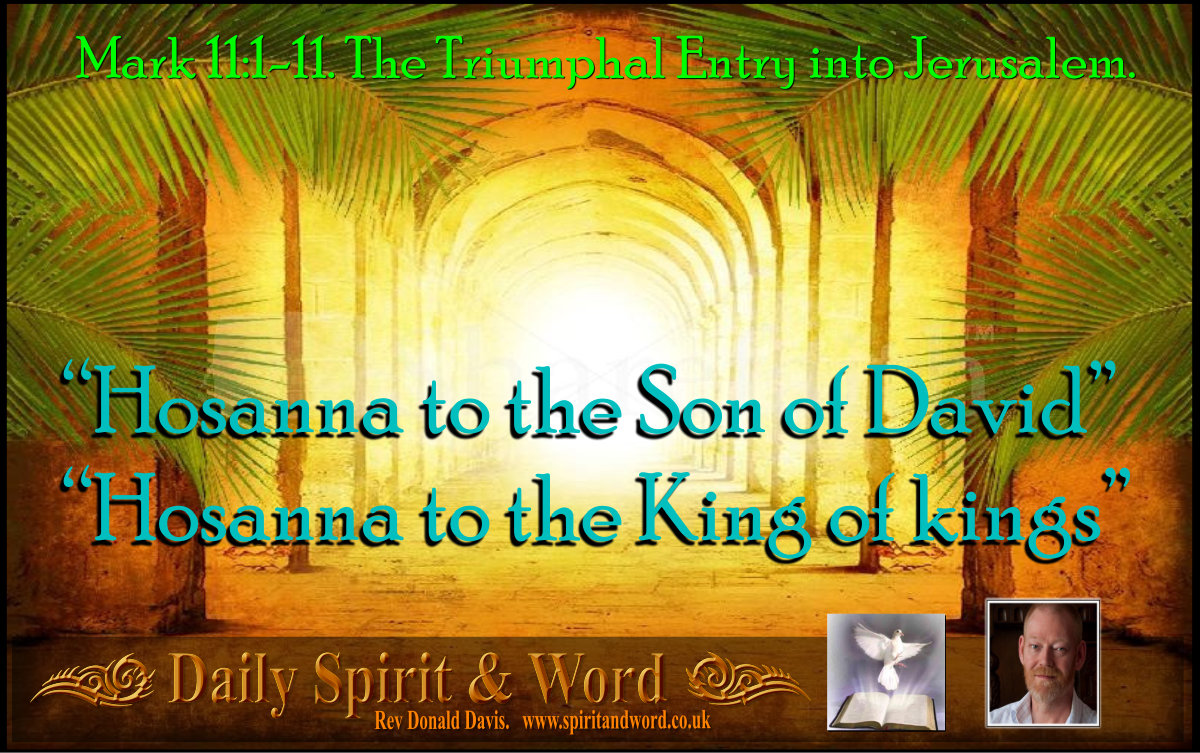 Jesus Christ: The Son of David

–What made it so memorable?

–How did it make you feel?

Personally, I love parades and parties, because one of my other passions is photography and being a photographer there’s nothing more exciting for me that to see people happy, enjoying themselves and I try and capture the feelings and atmosphere of events. I got some great pictures of the Queen and many other royals as they passed me by on the Mall in London during the Trooping of the Colours. The crowds were also very happy to see the Queen, you should have seen their faces and waving arms with flags. So many had their mobile phones and iPads out ready to snap the Queen.

Bible Reading: Today’s Bible lesson shows how a celebration for Jesus signified not just His Royal Authority but also His Servant Humility.

1 As they approached Jerusalem and came to Bethphage and Bethany at the Mount of Olives, Jesus sent two of his disciples, 2  saying to them, “Go to the village ahead of you, and just as you enter it, you will find a colt tied there, which no-one has ever ridden. Untie it and bring it here. 3  If anyone asks you, ‘Why are you doing this?’ tell him, ‘The Lord needs it and will send it back here shortly.‘ ”

4  They went and found a colt outside in the street, tied at a doorway. As they untied it, 5  some people standing there asked, “What are you doing, untying that colt?” 6  They answered as Jesus had told them to, and the people let them go.

7  When they brought the colt to Jesus and threw their cloaks over it, he sat on it. 8  Many people spread their cloaks on the road, while others spread branches they had cut in the fields. 9  Those who went ahead and those who followed shouted, “Hosanna!” “Blessed is he who comes in the name of the Lord!” 10  “Blessed is the coming kingdom of our father David!” “Hosanna in the highest!”

11  Jesus entered Jerusalem and went to the temple. He looked around at everything, but since it was already late, he went out to Bethany with the Twelve.

The Triumphal Entry into Jerusalem.

This was a great celebration: But who was it for? Was it for Jesus, whom they perceived to be the Messiah, the Son of David or was it for themselves, because they thought His coming signified freedom from Roman bondage and restoration of their National identity? I’m sure that in the crowd out of the thousands gathered that day, there would be some on both sides.

How Did Jesus Get Here?

Commanded, but Not Knowing Why:

Have you ever been asked to do something, when you don’t know the reason why? Or even after reflection you think it’s a foolish thing to be asked to do? Sometimes in life we’re expected to be obedient without knowing the reasons why. I was used to that in the Royal Navy, we were not always told why we were being sent somewhere or being commanded to do something, but we knew and trusted our leaders and that it would be for a good reasons. That’s trusting a respected authority. Jesus had obviously won the Disciples honour and respect, for they didn’t question Him, they didn’t say, “Why Lord?” They just did as the Master commanded. “Go”.

This signifies Jesus Authority: Over People. He demonstrated that He also had authority over many spheres;

However, does Jesus have Authority over you? Is He your LORD? He’ll never force you to accept His Lordship, but one day the Bible tells us, “Every knee will bow and every tongue will confess; Jesus Christ is LORD!” He may give you freedom to choose if He’s your Lord now, but we don’t know when He’s coming back. It must surely be better to submit to His Royal Authority before He returns and everyone is compelled to bow before Him. However, if you won’t trust Jesus because of His Authority, perhaps you will because of His Humility.

Jesus can obviously be trusted and we’ve got an obligation once we know that, to willingly submit to His Divine Authority. Being obedient to Him when He commands, even though we don’t know the BIG PICTURE.

Mark 11:4-6. They obediently went into the town, found the Donkey’s Colt as Jesus had said and untied it and brought it to Jesus. WOWzer! That’s awesome.

Modern Equivalent: Imagine if Jesus were here in London today and He commanded you; “Go down West Norwood Road and you’ll find a Volkswagen parked outside B&Q, you’ll find the keys in the ignition, get into the car and bring it to me. If anyone asks why you are taking the car, tell them the Master needs it” (Notice that it wasn’t a Merceedes or BMW, but a Volkswagen: Volkswagen means People’s Car or a car for the people). “If anyone asks you!” My friends if we were to get into a car in London, we’d probably be immediately arrested and questioned by the Police. Try explaining that the Master needs it as a reason for taking someone’s car these days. LOL

However, Jesus followers were obedient, they did it and were not aware of the reasons why, but this also reveals another Aspect of Jesus Authority: He knows things, He knew they’d find the Colt and how it would be tied. He knew the people wouldn’t object.

3) There’s the Humility of the LORD:

He came into Jerusalem on a Donkey. Not as a normal Triumphal Procession: In a Chariot or on a White Charger. Even today when the Queen Processes down the Mall it’s either in a Golden Carriage or a Stretched Limousine, not a Volkswagen. 🙂

Jesus is the Model of Humility:

Jesus didn’t come to earth to be served, but to serve and give His life.

Matthew 11:29 “Take my yoke upon you and learn from me, for I am gentle and humble in heart, and you will find rest for your souls.”

Jesus is gentle and humble in heart.

Those who are truly following the Lord Jesus Christ will also be humble, gentle too. Look at the fruits of the Holy Spirit of God: Love, Joy, Peace, Patience, Kindness, Goodness, Gentleness and Self-Control. WOWzer! He’s making you to be more like Jesus Christ when you follow Him.

Shouting, cheering and Waving Palm Branches. Crowds can be so fickle: Don’t always follow the crowd.

The Crowd: Was filled with JOY, Praise, Adoration. Why? Because their New King was coming into their Capital City Jerusalem.

How Fickle This Crowd Was:

Just a few days after Jesus Triumphal Entry into Jerusalem we find large crowds, stirred up by their leaders, shouting with just as much enthusiasm for Jesus to be Crucified. Remember the crowds motivated to stone Stephen, to beat Paul within an inch of his life and left for dead. The Crowds cannot always be trusted to get things right. Mob mentality takes over and everyone follows like a sheep.

The Popular Religious Writers: Some calling themselves ‘Christian’ say things the world and foolish Christians long to hear, but they are far from the revealed will of God. They’ll advocate things the Lord has condemned and say that they are good for you.

The Christian who chooses to live in sin: They want others to endorse their wayward way of life, and the world loves to hear of hypocritical believers, the crowd’s pressure is intense these days.

The Non-Christian: They’ll say all kinds of strange things about Jesus, about the Bible and about God. The World loves it and the pressure to go along is needle like too, it penetrates to all levels of the modern church. The fact of God’s Creation is being constantly attacked. Compromise and acceptance of false beliefs, because the glamour of the crowd is deafening. Christians are shutting their mouths and the world is getting worse by the day. Christians don’t want to appear odd or out of kilter with society, so they’ll accommodate and acquiesce. Christians are afraid of being made to look foolish when scientists and psychologist try and explain away our revealed faith. However, true science is nothing to be afraid of, for it will in the end, find God’s Word to be trustworthy and true. Soon they’ll discover that there was indeed a Creator and He still holds Creation in balance.

The Triumphal Entry: If you were in that Crowd when Jesus came into Jerusalem, would you be shouting Hosanna (praise the Lord) just because everyone else was shouting or would it be because Jesus really was your King?

A week later, if you were there when Jesus was brought out and you were asked who should be released, Barabbas or Jesus, would you go along with the crowd or would Jesus still be your King?

When the Crowd today says things about Jesus, God, the Bible and Christianity that are NOT true, will you stand up for Jesus or go along with the crowd or worse still, stay silent?

A Tapestry: If you look at the reverse side of a tapestry, all you see is knots and bits of thread, but turn it over and WOWzer, you’ll see the bigger picture in all it’s splendour.

Just like the Disciples of Jesus who were not aware of why they were being commanded to go get a Donkey’s colt, we too are not always aware of why the Lord wants us to do certain things, be certain places or speak His word in season; turning the other cheek, blessing our enemies and forgiving those who do evil things to us, etc, but because we know Jesus and love and respect and honour Him, we’ll do what He says, because He’s got the bigger picture, He knows the end from the beginning, because He knows the BIG PICTURE, even though to us it all looks like a mess down here on earth, one day we’ll observe and be overyjoyed by the splendour of the KING.

After the Triumphal Entry, Trial, Crucifixion and Resurrection; Jesus is now the Ascended King of kings and LORD of Lords, He’s on the Throne in Heaven, He’s coming back again soon, will you be in that Crowd cheering Jesus return? Are you longing for the return of Jesus in all his glory? He’s coming soon my friends at an hour we don’t expect.

The LORD NEEDS IT:

Sometimes we give to the LORD begrudgingly, but this man let Jesus have his Donkey’s Colt, because the Disciples said, “The Master Needs It”… Oh WOW! Is there anything you can give to Jesus today? Oh yes there is my friends; Jesus wants you to use;

All of these things for the KING and for use in the KINGDOM of Jesus.

You don’t need to be like that FICKLE CROWD.

You can be; Trusting Jesus today, because He’s proven to be TRUSTWORTHY.

You can live in Obedience today, because He’s your King and Lord and knows the beginning and the end.

You can be Serving Jesus today, because you LOVE Him: with all your heart, mind, soul, will and strength.

You cannot do it in your own strength, you need Jesus and the Holy Spirit’s help. If you try, even with all your own strength and might you’ll fail, but if you SUBMIT to His Authority, recognising His Humility, you’ll flourish and grow as a Christian, because He’ll give you all you need to be triumphant and victorious in the Christian life.

Have an amazing Holy Week and come and join us on;

I’m praying for you all today, that you’ll be able to resist the clamour of the crowds and continue steadfastly to follow the Lord Jesus as your King and Master, Saviour and Lord. Amen!