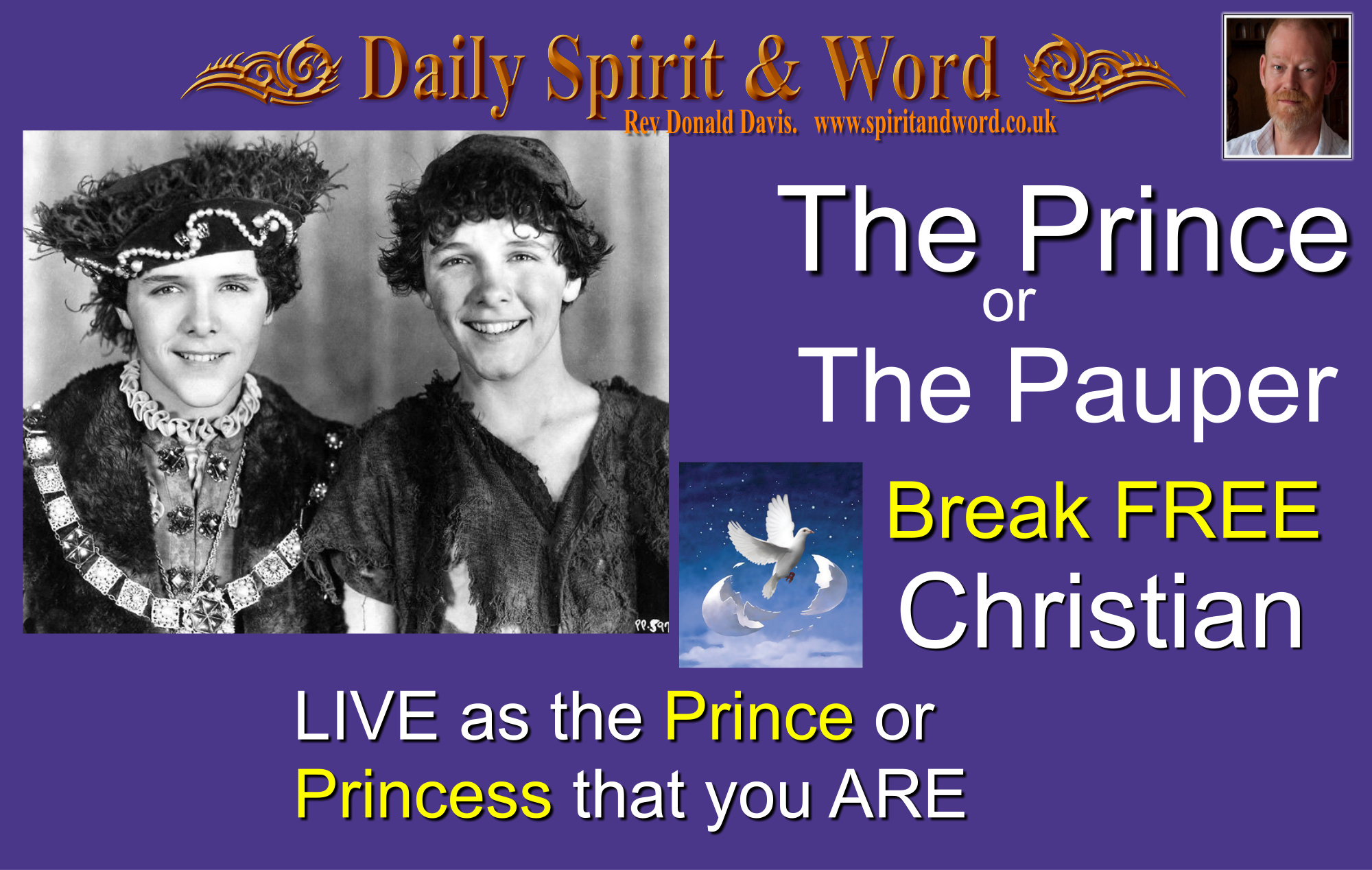 Good morning my friends, Last night’s Discipleship Meeting was truly AWESOME. We had a few more people and so reviewed the first week’s teaching, quickly 🙂 Then we discovered all the promises and privileges we have as Disciples of the Lord Jesus Christ. One of those privileges is that we are heirs and co-heirs with Christ of the Kingdom. That means we are ROYALTY. Every truly born again Christian is a Prince or a Princess in God’s Kingdom Family, but why is it that so many of us living like paupers?

I watched a News snippet the other day of Prince William, who’d just become an Air Ambulance Pilot. When asked why he was doing it, he said, “It’s to keep my feet on the ground” Hello, am I the only one who knows helicopters don’t keep your feet on the ground 🙂 LOL. However, when questioned further William said, “I just want to stay grounded, rooted and let people know that I’m just like them, to stay in touch with reality, just like an ordinary good guy, doing some good in society”.

We can all relate with that wonderful sentiment can’t we? However, we’ve also heard the saying over and over again, “too Heavenly minded to be any earthly use”. Some Christians have actually believed that foolishness, so much so that they think they should be soaked in worldly things so that they’ll be ‘earthly’ useful. Prince William wants to be of some value, to do good and to not just live like a Royal Prince in a Palace or doing appearances and waving at the crowds. He wants to be seen as an ordinary person as well. But Christians, just like Prince William are NOT ordinary.

So Christians do the same, they’ll stop going to so many prayer meetings, Bible study groups, fellowship groups; why? because they don’t want to appear too heavenly minded to be any earthly use. They don’t want to appear “holier than thou”. However, in the process they’re short-changing themselves and living far below God’s call and purposes.

They are God’s Kingdom Princes and Princesses, but they are beginning to live like paupers.

We so easily forget this wonderful statement from God’s Word;

1 Peter 2:9 “But you are a chosen people, a royal priesthood, a holy nation, a people belonging to God, that you may declare the praises of him who called you out of darkness into his wonderful light.”

Just as Prince William has been chosen by destiny to BE a Prince of the Royal Family. So you have been selected by God from all the other people upon the face of the earth to be His PEOPLE.

You ARE all these things for a PURPOSE:

So if we are all of the above as Disciples of Jesus Christ, then why on earth do we live as if we are ‘just like everybody else’? Why would we want to? Why do we do it? Why are God’s Princes and Princesses living as if they are paupers?

There is a growing awakening amongst Christians today, a realisation that we are NOT living the way the the LORD wants us to really live. We’ve settled for way too little, we living far below His high calling, we’re only just glimpsing the prospect of what it (life) could be like if we just took God at His Word.

We can see it (the fullness of life) from time to time, when the BIG man of God comes to a meeting, and the POWER of God is present for a little while, two hours or so at a gathering, but when we get home, the POWER levels sink back down to ab-normal. I say ‘abnormal’ because that’s NOT what God wants, but what we’ve been suckered into accepting. We’ve been deceived into believing that the KINGDOM POWER is only for a few, very special, highly qualified, gifted individuals, but not for ‘ordinary’ poor little me. So God’s Royal Family are beginning to live as if they are just like everybody else, ordinary.

YOU ARE NOT ORDINARY.

Don’t you know that the SAME power that raised Christ from the dead is IN YOU?

So now you can live in that POWER and BE the Royal Prince and Princesses that He’s called you to be.

What does it take to see that POWER at work?

It takes obedience to the voice of the Holy Spirit.

Listening to His promptings.

When you see someone, anyone, sick or in some kind of need, you’ll be just like Jesus, doing what the Father commanded Him to do, being obedient and reaching out to them in that same Spirit Power, touching, healing. The resources you’ve been given will be used for Kingdom Family business. Seek FIRST the Kingdom. You’ll LIVE for the Kingdom. The Kingdom will be your TOP priority in LIFE. Nothing else! Nothing will come in the way between you and living for God’s Kingdom: Nothing.

Now all you have to do is take a step of faith and try it. Pray for people, don’t give up, lay hands on people, see the Kingdom Power at work. Get together with other Christians and TRY it. Be filled with God’s Holy Spirit, Repent of ALL known sin in your life. Jesus wants to use you powerfully as a Prince and Princess in His Kingdom, so now you must start and continue to Live like Royalty that you are.

The Discipleship Meetings: Are not just to give us head-knowledge, but to transform our lives to that we can be the Disciples that Jesus called us to be when we started following Him. Have you been Discipled properly?

Jesus didn’t call us to go out and “Make Converts”: In the Great Commission He called us to go and Make Disciples and to TEACH people to live in obedience to the Commands and Teachings of the Messiah. That means actually living and doing what we see the new followers doing in the book of Acts: Going out, preaching the Good News, Healing the Sick, Casting out Demons, teaching others how to follow Jesus too and saving people from God’s Judgement to come. God wants you to LIVE like Princes and Princesses in His Kingdom. He’s made available ALL the resources that you need to be able to do what Jesus did. It’s happening today. Many Christians are waking-up to the reality of God’s call, will you be one of them?

Stay blessed, filled and empowered by God’s Holy Spirit. Avail yourself of everything He’s provided and do it today.

I’m praying: That every Christian reading this will be so full of God’s Spirit that they’ll leak His love and power all over the place, into the lives of those around them and that many will be touched and Saved.

Watch This Video Today: A Reiki Master becomes a follower of Jesus Christ.