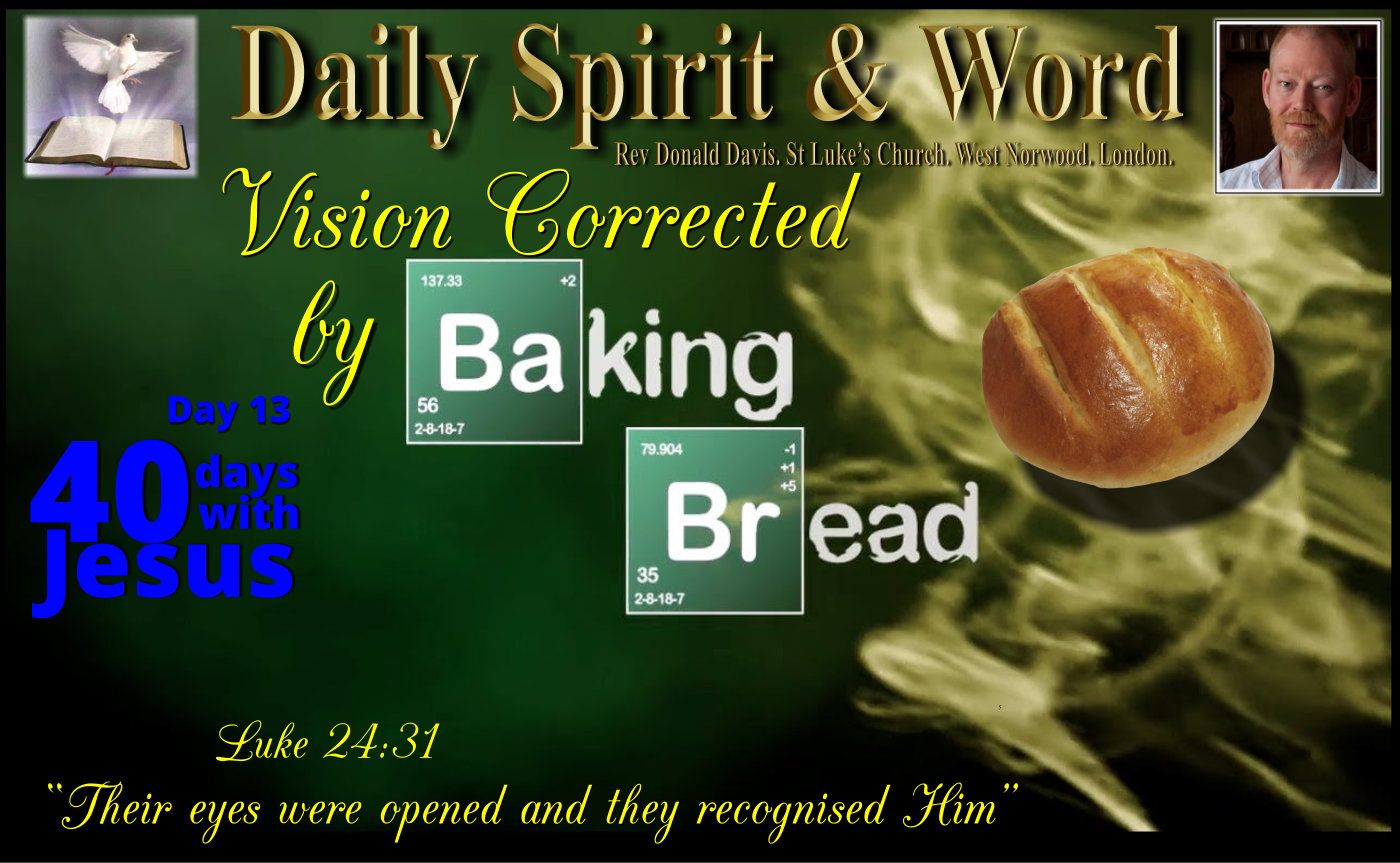 Daily Spirit & Word, Vision Corrected by The Braking of Bread.

40 Days With Jesus; Day 13: Vision corrected by the breaking of bread.

Good morning my friends, I want to thank all of you who prayed for us yesterday, because our AGM (Annual General Meeting) went very well indeed. We’re looking forward to working closely with those who’ve been elected for the first time and those re-elected onto the PCC (Parochial Church Council) who, together with the Church Wardens and the Vicar oversee the running and maintenance of our Church. Please continue to pray that we’ll know the Lord’s will for the year ahead.

As we begin a new week today, we’re continuing in our 40 Days With Jesus, looking today at how our own vision of Jesus Christ can be corrected by the breaking of bread.

Luke 24:30-35 30  When he was at the table with them, he took bread, gave thanks, broke it and began to give it to them.
31  Then their eyes were opened and they recognised him, and he disappeared from their sight.
32  They asked each other, “Were not our hearts burning within us while he talked with us on the road and opened the Scriptures to us?”
33  They got up and returned at once to Jerusalem. There they found the Eleven and those with them, assembled together
34  and saying, “It is true! The Lord has risen and has appeared to Simon.”
35  Then the two told what had happened on the way, and how Jesus was recognised by them when he broke the bread.

In the account of Jesus appearing to the two disciples on the road to Emmaus, we’ve now reached the climax of the incident, when their eyes were opened to who the stranger on their journey was. The realisation that their hearts burned withing them as their understanding of God’s Word was increased by the risen Christ explaining all that the Scriptures said concerning Himself. I hope your own hearts are burning now from having just read how they got their revelation.

Note once again the Order of Events:

It’s in the breaking of bread that they know Jesus.

This is where we are reminded by some commentators of Jesus words at His last Passover supper with the Disciples before He was crucified, when He once again took the break, gave thanks and broke it and gave it to them. However at that meal just said, “This is my body, broken for you, do this in remembrance of me”.

Now my friends, comes the BIG question: What was it about that moment that enabled the disciples to recognise Jesus? It could have been as they watched him breaking the bread, and then they saw His nail pierced hands. For we know He carried those scars in His resurrected body. It could have been that they just finally got it, they knew Jesus and once they’d gotten over their grief and doubt, they finally saw it was Jesus. It could have been that Jesus changed His voice and they recognised His voice, reminding us that those who are His sheep, know His voice and listen to the good shepherd of our souls.

The fact is we just don’t know: But at that moment, in the breaking of bread, they did suddenly know it was Jesus. Instead of bedding down for the night, they rushed out of the house and headed back to Jerusalem to tell everybody else.

My friends, when you get your own REVELATION of Jesus, you’ll want to do the same. I can tell who’s had their revelation, it’s those who’re bursting to tell others about Jesus, is that you? Perhaps you’re still waiting?

Charles Spurgeon said, “If you don’t want to share the Gospel with those who don’t yet know the Lord Jesus Christ, then you have not been born again”.

The Bible tells us of another eye-opening moment of revelation: In the Garden of Eden when Adam and Eve ate the forbidden fruit, their eyes were opened and they realised they were naked. That eye-opening event brought, guilt, shame, condemnation, fear and dread of coming into God’s presence, they hid themselves away from God. But the eye opening of the disciples came after spending time with the risen Lord, hearing God’s Word, inviting Him in and eating bread together. It brought them closer to God and their hearts burned withing them and they knew the risen Lord Jesus Christ. For the normal Christian birth, we’ll come in the same way: We’ll hear about Jesus through Scripture and Gospel proclamation, the Bible tells us that faith comes by hearing the Word of God (our hearts burning within), then when we get to the point of receiving Jesus (inviting Him in), we’ll also get our own revelation of who He really is.

Oh my friends, as you break bread in the name of Jesus, remember His promises, that He’ll be with you. Jesus is wonderfully present in the breaking of bread and the gathering together of the saints. When you receive Jesus, He’s going to be in you for all eternity. Now, we’ve just got to live out that faith, live the resurrected life and spread the good news, like those first disciples, telling everyone you know, “I’ve met the risen Saviour”.

You know that old hymn: “He Lives, He Lives”?

I did a search on Google for this song and it’s playing in the background as I’m writing to you my friends. You can do the same and listen, worship and pray as you read.

I serve a risen Savior
He’s in the world today.
I know that He is living,
Whatever men may say.
I see His hand of mercy;
I hear His voice of cheer;
And just the time I need Him
He’s always near.

In all the world around me
I see His loving care,
And though my heart grows weary,
I never will despair;
I know that He is leading,
Through all the stormy blast;
The day of His appearing
Will come at last.

Rejoice, rejoice, O Christian,
Lift up your voice and sing
Eternal hallelujahs
To Jesus Christ the King!
The Hope of all who seek Him,
The Help of all who find,
None other is so loving,
So good and kind.

As you continue to spend 40 Days With Jesus, I’m praying that in your ‘The Breaking of Bread’ you’ll also know and recognise Jesus presence. May He come to you afresh today. Trust Him and His promises to be with you, to be in you, to reveal Himself to you. Walk with Jesus and know that He is ALIVE, as the song above tells us, He’s the SAME today as when He walked the earth. How do we know Christ is risen? Because “He lives, He lives, He lives withing my heart”

Have a fantastic new week with Jesus my friends,

Dear Lord Jesus Christ, I thank You for the tenderness and gentleness towards me today and that You revealed Yourself to the disciples over a meal. Forgive me for the times I’ve neglected to give thanks and remember You when we’ve gathered with other believers of a meal. Help me always to remember Your promise to be with us when we gather and when we eat in remembrance of You. Lord, I ask today that You’ll continue to reveal Yourself to me and all my friends, so that we can know You better every day and be so on fire and filled with JOY in Your company that we’ll long to tell others about You. Amen.

40 Days With Jesus: Day 13: Vision Corrected By The Breaking of The Bread.

The Breaking of Bread.