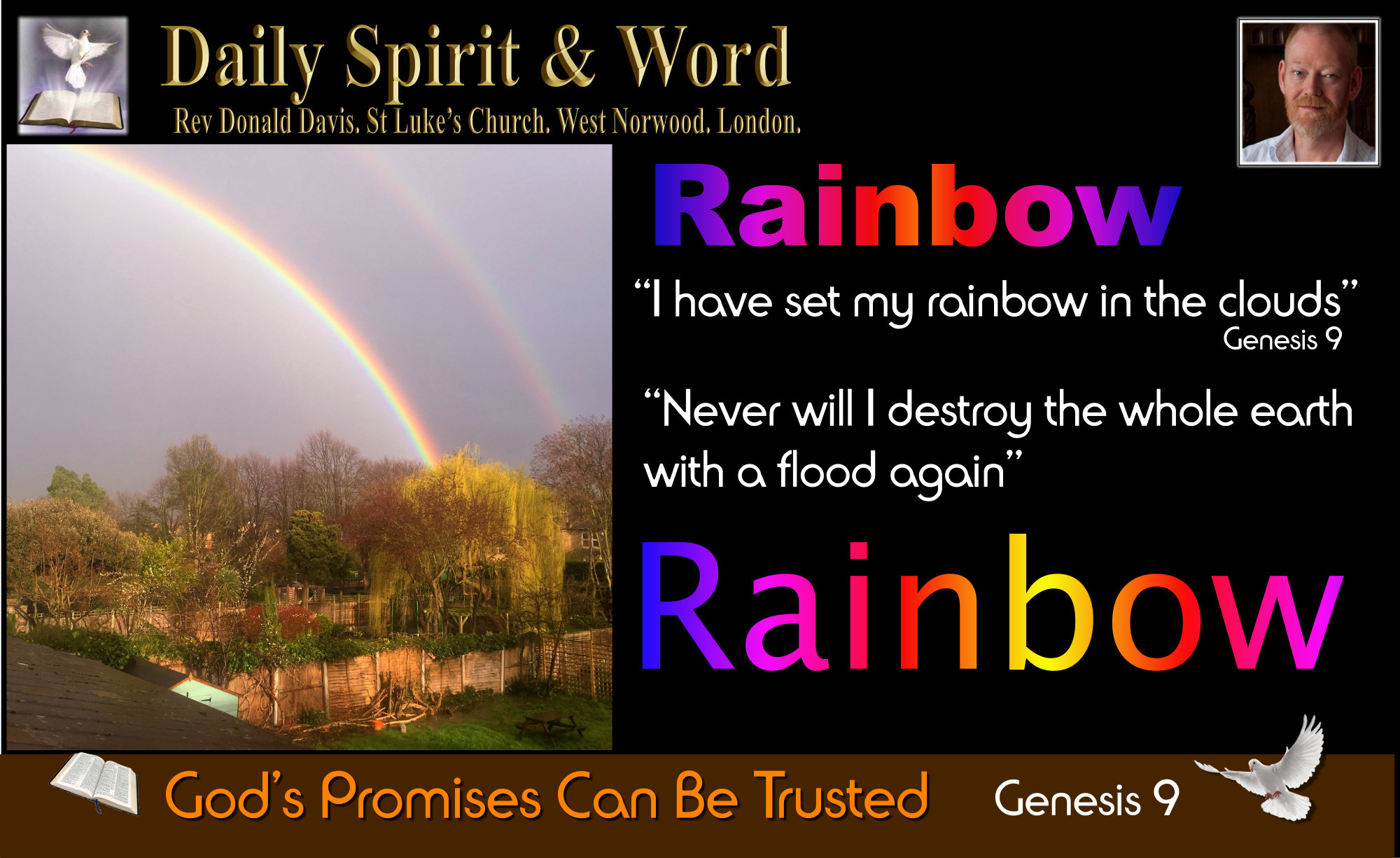 Daily Spirit & Word: 714: The Rainbow After The Storm.

Good morning my friends, hope all is well with you after Storm Katie, I know that many people were blasted by those winds. Yesterday, after all those devastating winds there was a beautiful double rainbow just outside our windows to the front and back of our house. So lovely to see all those colours even though the sky was leaden.

We see God’s repeated promise and Covenant with Noah and his sons and all human beings and animals, He will NOT destroy the earth with a flood again. Genesis 9.

Scientists have discovered incontrovertible evidence of a world-wide flood. On the Mountains there are sea shells. Many now believe the Dinosaurs were wiped out by the great flood, because most of them are trapped and encapsulated in mud. It must have been a sudden and terrific flow of mud too, because many of these dinosaurs are still standing up when they are encased in mud.

Many people don’t believe human beings were around during the dinosaurs era, but just one reading of Job will prove that these great and fearsome creatures lived with men. They say, “Why aren’t dinosaurs mentioned in the Bible?” That’s because the word ‘Dinosaur’ was not invented until the 19th Century by a man called Sir Richard Owen in 1841.

What did people call these great creatures when they saw them? “Dragons”… Dragons were known by human beings all over the earth.

You might laugh at those videos and the ‘evidence’ they produce, but I wanted to get you thinking today.

So from the beginning in Genesis we have God’s Promise “Not to Destroy the Earth with a flood”. but we also have God’s warnings about the End Times: Just before he returns to Judge the Earth and the living and the dead.

From Got Questions: End Times: “Some interpreters point to every earthquake, every political upheaval, and every attack on Israel as a sure sign that the end times are rapidly approaching. While the events may signal the approach of the last days, they are not necessarily indicators that the end times have arrived. The apostle Paul warned that the last days would bring a marked increase in false teaching. “The Spirit clearly says that in later times some will abandon the faith and follow deceiving spirits and things taught by demons” (1 Timothy 4:1). The last days are described as “perilous times” because of the increasingly evil character of man and people who actively “oppose the truth” (2 Timothy 3:1–9; see also 2 Thessalonians 2:3).” Got Questions?:

However, don’t worry about it, just turn and trust in Jesus and keep walking in the Holy Spirit, then you’ll be OK when Jesus comes back to Judge, no matter what happens to your body in the meantime, you’ll be with the Lord forever. Amen!

Is a sign of comfort, but also a warning that our God is The Powerful Creator who has control over all his Creation. One day He’s told us in advance, He will destroy both the Universe and the Earth, but before that day comes, He’s being patient with mankind, not wanting anyone to perish, but everyone to come to repentance and faith in His Son Jesus Christ.

He also promised to give us signs, warnings, so that we can get ready for the coming Judgement Day:

But He’s also promised He’ll come at a time when we least expect it, like a thief in the night.

So when you see a rainbow, it’s a beautiful Covenant sign, it’s a comfort and a warning to get ready and get right with God who Created all things, let’s do it today. Because TODAY is the Day of Salvation.

Even if you don’t believe in Dinosaurs or Dragons, the signs are that the End is Near, but I’ve saved the best till last.

Matthew 24:29-44 (AMP)
29  Immediately after the tribulation of those days the sun will be darkened, and the moon will not shed its light, and the stars will fall from the sky, and the powers of the heavens will be shaken.
30  Then the sign of the Son of Man will appear in the sky, and then all the tribes of the earth will mourn and beat their breasts and lament in anguish, and they will see the Son of Man coming on the clouds of heaven with power and great glory [in brilliancy and splendour].
31  And He will send out His angels with a loud trumpet call, and they will gather His elect (His chosen ones) from the four winds, [even] from one end of the universe to the other.
32  From the fig tree learn this lesson: as soon as its young shoots become soft and tender and it puts out its leaves, you know of a surety that summer is near.
33  So also when you see these signs, all taken together, coming to pass, you may know of a surety that He is near, at the very doors.
34  Truly I tell you, this generation (the whole multitude of people living at the same time, in a definite, given period) will not pass away till all these things taken together take place.
35  Sky and earth will pass away, but My words will not pass away.
36  But of that [exact] day and hour no one knows, not even the angels of heaven, nor the Son, but only the Father.
37  As were the days of Noah, so will be the coming of the Son of Man.
38  For just as in those days before the flood they were eating and drinking, [men] marrying and [women] being given in marriage, until the [very] day when Noah went into the ark,
39  And they did not know or understand until the flood came and swept them all away—so will be the coming of the Son of Man.
40  At that time two men will be in the field; one will be taken and one will be left.
41  Two women will be grinding at the hand mill; one will be taken and one will be left.
42  Watch therefore [give strict attention, be cautious and active], for you do not know in what kind of a day [whether a near or remote one] your Lord is coming.
43  But understand this: had the householder known in what [part of the night, whether in a night or a morning] watch the thief was coming, he would have watched and would not have allowed his house to be undermined and broken into.
44  You also must be ready therefore, for the Son of Man is coming at an hour when you do not expect Him.

When you see a rainbow in the sky, praise the Lord of Creation and worship Him.