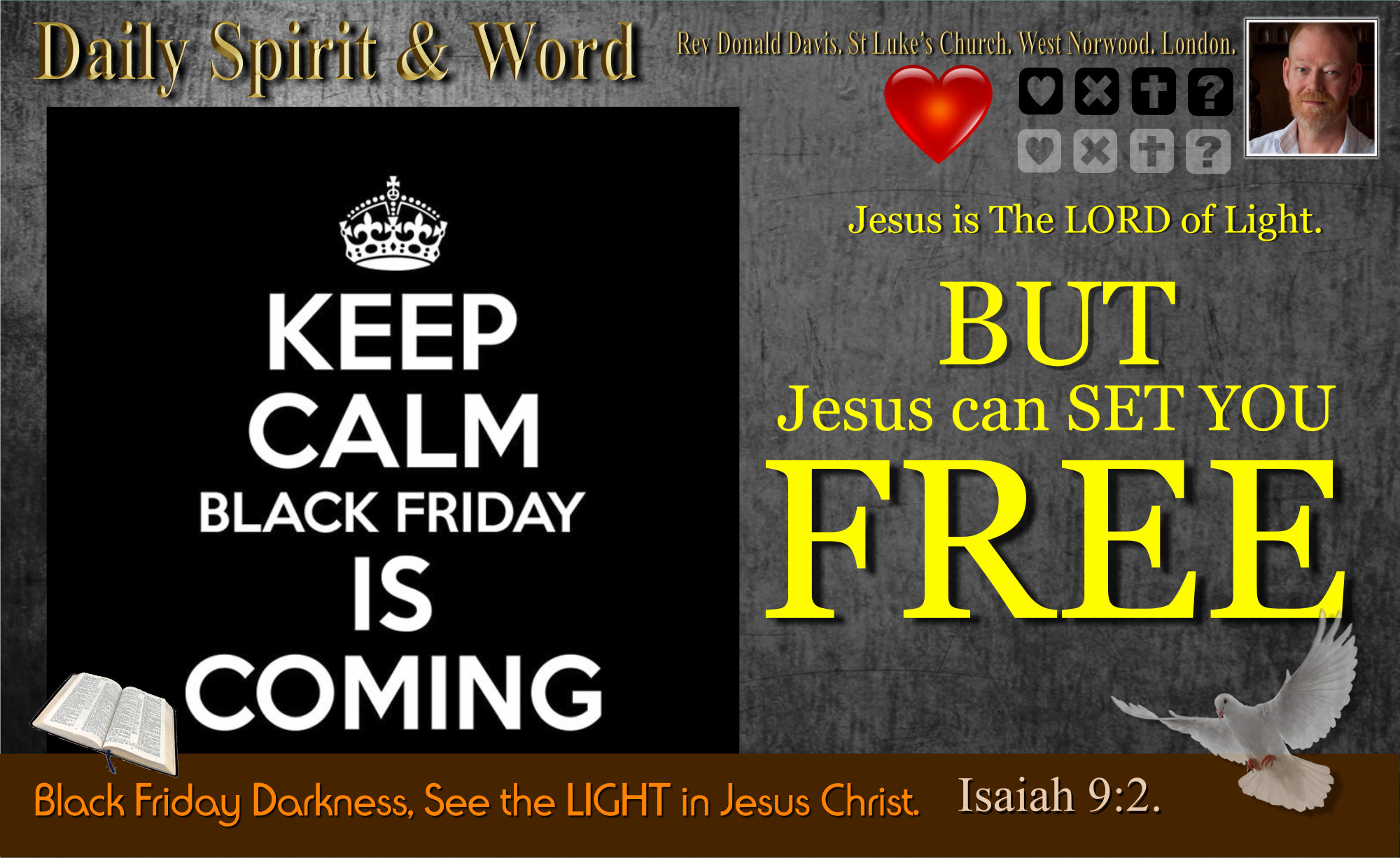 If you want it, you’ve got it.

But be careful what you are wanting.

We live in a world that is full of desire for things. Even the church has been infected by it and has focused much of it’s teachings on meeting the needs of people’s desires. So much so, that they now declare to people, “have faith, just believe it and you will receive it”. This is the name it claim it Gospel.

Of course we’re all meant to be Servants of the Lord ready to respond to one another’s needs, but simply to appeal to our desires begs a few questions, because those things that people desire most, are things God has warned us will lead us into the darkness and farther away from Him. If you desire darkness, then God is going to give it to you, big time: Watch OUT or you will receive your BLACK FRIDAY.

What things then do we desire most that God has forbidden?

1) Riches: To enable us to get lots of STUFF…

If we want these things, then God is going to give us over to these desires, but note this, when we’re given over to our desires, we’ll be in total DARKNESS, the end result being that we’ll be DRIVEN by those desires in an ever increasing measure. Our natural affections will be turned into inordinate affections.

Romans 1:18-32 (NIV)
18  The wrath of God is being revealed from heaven against all the godlessness and wickedness of men who suppress the truth by their wickedness, 19  since what may be known about God is plain to them, because God has made it plain to them. 20  For since the creation of the world God’s invisible qualities—his eternal power and divine nature—have been clearly seen, being understood from what has been made, so that men are without excuse.
21  For although they knew God, they neither glorified him as God nor gave thanks to him, but their thinking became futile and their foolish hearts were darkened.
22  Although they claimed to be wise, they became fools
23  and exchanged the glory of the immortal God for images made to look like mortal man and birds and animals and reptiles.
24  Therefore God gave them over in the sinful desires of their hearts to sexual impurity for the degrading of their bodies with one another.
25  They exchanged the truth of God for a lie, and worshipped and served created things rather than the Creator—who is for ever praised. Amen.
26  Because of this, God gave them over to shameful lusts. Even their women exchanged natural relations for unnatural ones.
27  In the same way the men also abandoned natural relations with women and were inflamed with lust for one another. Men committed indecent acts with other men, and received in themselves the due penalty for their perversion.
28  Furthermore, since they did not think it worth while to retain the knowledge of God, he gave them over to a depraved mind, to do what ought not to be done.
29  They have become filled with every kind of wickedness, evil, greed and depravity. They are full of envy, murder, strife, deceit and malice. They are gossips, 30  slanderers, God-haters, insolent, arrogant and boastful; they invent ways of doing evil; they disobey their parents; 31  they are senseless, faithless, heartless, ruthless.
32  Although they know God’s righteous decree that those who do such things deserve death, they not only continue to do these very things but also approve of those who practise them.

What a SAD indictment against humanity.

AND A CONTINUAL LUST FOR MORE:

Ephesians 4:17-19 (NIV)
17  So I tell you this, and insist on it in the Lord, that you must no longer live as the Gentiles do, in the futility of their thinking. 18  They are darkened in their understanding and separated from the life of God because of the ignorance that is in them due to the hardening of their hearts. 19  Having lost all sensitivity, they have given themselves over to sensuality so as to indulge in every kind of impurity, with a continual lust for more.

And the great enemy of human beings, who have been Created in the image of the immortal God, loves it.

2 Corinthians 4:3-4 (NIV)
3  And even if our gospel is veiled, it is veiled to those who are perishing.
4  The god of this age has blinded the minds of unbelievers, so that they cannot see the light of the gospel of the glory of Christ, who is the image of God.

Who is Jesus? He is the LIGHT who gives the sure and certain HOPE of Freedom.

Jesus is the LIGHT of the WORLD:

So that the people who are walking, living and bound by the darkness can see the LIGHT and are given hope of being set free from the DARKNESS.

He came to set all mankind free from the darkness and from bondage to sin and Satan. Though God has given us over to be controlled and ruined by our sinful desires, to shameful lusts and to depraved minds, there’s now the HOPE of freedom in Christ Jesus.

That FREEDOM comes as we BELIEVE in Jesus. TRUST in Jesus for forgiveness. REPENT of sin and FORSAKE sin, as we RECEIVE Jesus Christ as Lord. Then we are BORN AGAIN, given a renewed heart, mind, will and desires as we are FILLED with Holy Spirit. He is the one who will enable us to LIVE the abundant life he’s called us to.

When BLACK FRIDAY: Gets Hold Of A Believer:

If ever we get into BONDAGE again, then all we have to do is come back to Jesus Christ to be set free all over again. (I’ve known many Christians who get caught up in this world’s affairs, their desire for Holiness is dimmed, their hearts become dull and hard again to Jesus, to the Gospel, to saving others. All because they’ve chosen the darkness rather than the light. They’ve become bound by Satan again and need the freedom that only Jesus Christ can give them. Thankfully, we’re seeing believers being set free and given renewed hearts again.) It’s like the Gospel needs to be preached to those who already have believed and trusted in Jesus, because they need the NEW LIFE Christ promised to all who would believe and trust in Him. Of course there are many who believe in Jesus, but have never been born of the Spirit, yet there is HOPE of the freedom and the promise.

Though there is a GREAT DARKNESS.

Though people are walking in this DARKNESS.

There is HOPE: The LIGHT has come to set us FREE.

Isaiah 9:2 (NIV) The people walking in darkness have seen a great light; on those living in the land of the shadow of death a light has dawned.

Jesus Christ is the LIGHT: Come, Believe that He died to set you free from your inordinate desires, those things that control your life and lead to death, to judgement and eternal Hell. He endured the Cross for your freedom. All you have to do is TRUST that He died to set you free and enable you to be forgiven of your sins. Once you REPENT by confessing your sins to God and turning from those sins, forsaking them, and receive Jesus by an act of faith. He’ll come and give you the promised NEW LIFE and FREEDOM. Amen!

NOW: Having trusted in Jesus, you can live the NEW LIFE with NEW POWER.

Ephesians 4:20-32 (NIV)
20  You, however, did not come to know Christ that way.
21  Surely you heard of him and were taught in him in accordance with the truth that is in Jesus.
22  You were taught, with regard to your former way of life, to put off your old self, which is being corrupted by its deceitful desires;
23  to be made new in the attitude of your minds;
24  and to put on the new self, created to be like God in true righteousness and holiness.
25  Therefore each of you must put off falsehood and speak truthfully to his neighbour, for we are all members of one body.
26  “In your anger do not sin”: Do not let the sun go down while you are still angry,
27  and do not give the devil a foothold.
28  He who has been stealing must steal no longer, but must work, doing something useful with his own hands, that he may have something to share with those in need.
29  Do not let any unwholesome talk come out of your mouths, but only what is helpful for building others up according to their needs, that it may benefit those who listen.
30  And do not grieve the Holy Spirit of God, with whom you were sealed for the day of redemption.
31  Get rid of all bitterness, rage and anger, brawling and slander, along with every form of malice.
32  Be kind and compassionate to one another, forgiving each other, just as in Christ God forgave you.

BE The People of The Light

Black Friday reminds me of the DARKNESS, however we can know that through Jesus, we can be set free to live as the people of the light.

The New Life in Christ is a continual renewal: He will give you HIS HOLY DESIRES. Amen!

Be blessed this coming weekend,