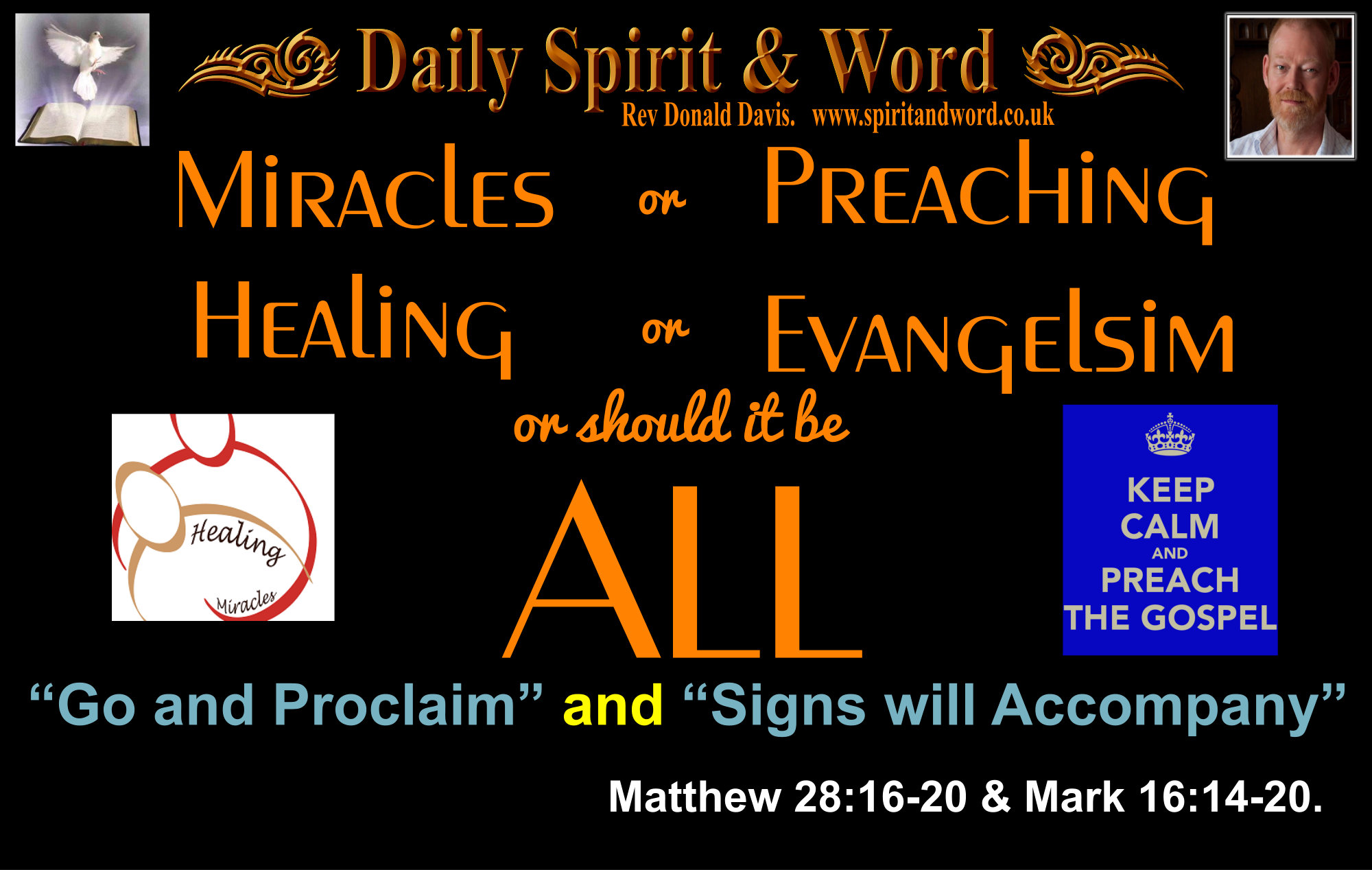 Miracles or Evangelism or Both?

Good morning my friends, it’s fantastic when the LORD is speaking to you loud and clear. Yesterday we had a visit from the Gideons in church, it was good for me to listen to another man bringing God’s Word and to be fed in a different way. It was also great that the man speaking was an obvious convert to the Lord Jesus Christ. He loved the Lord and the Lord spoke through Him.

His message was about Cracked Pots: Shining the Light of the Lord. He recounted the story of Gideon’s Battle. His message was that God’s light can only sine out of the cracked pots. I was tempted to make a joke at the end of his sermon: “Let’s all be Crack Pots for Jesus”… It may have raised a smile, but it would have detracted from His brilliant message.

Before the service began I welcomed him and we chatted. He was telling me about his son’s church in Clapham, it’s a new Vineyard Church plant, they are good, Holy Spirit filled people. That church has been out on the streets of Clapham sharing Jesus and healing people. There was one slight difference in what they called their team from our team: They are called the ‘Healing On The Streets Team’, we call ours ‘The Evangelism Team’. But I’m thinking of changing it now!

What team would you be more inclined to join? The Healing On The Streets or The Evangelism Team?

It’s a no-brainer for me, but I know there’s one word that makes the vast majority of the Church quake in their boots and run for cover; it is the word EVANGELISM. Why?

Well my friends, it’s because even just thinking about going out to share Jesus with folks is scary, it’s daunting, and it’s confrontational. (of course it’s not, but that’s what people automatically believe and imagine, because they’ve swallowed the lies of Satan about Evangelism). Whilst on the other hand ‘Healing On The Streets’ sounds much more appealing, less confrontational, more powerful and has much longer lasting and more profound effects. (Of course it doesn’t, but we’re much more comfortable with the ‘miraculous’ than we are with the ordinary).

Adrian Rogers has said; “Miracles normally came in clusters in the Bible. There were miracles, obviously, in the Creation, miracles around the ministries of Moses, Elijah, and Elisha, miracles with Jesus and the apostles, and there will be end-time miracles. I do not know anybody today who has the gift of miracles, but I would certainly not deny God’s ability in that area. He’s proven it too well. However, I would rather have it said of me that many believed on Jesus through my word than that I had the power to do miracles—because that is the lasting miracle, the new birth, the greatest miracle of all.” {What Every Christian Ought to Know Day by Day: Essential Truths for Growing Your Faith.}

How About BOTH: Miracles & Conversions:

I’ve been thinking about this my friends, since yesterday 😎  and ever since I’ve been saved. 😛   Jesus commanded us to go and proclaim the Good News. He equipped us to do it by giving us the Holy Spirit and Spiritual Gifts. However, it’s also true that He wants us to perform miracles as well as proclaim the Gospel. In Mark’s Gospel the Great Commission is slightly different from Matthew’s.

Which is right? Since they are both from God’s Word: They are both right my friends, we are to Make Disciples and we are to Perform Miracles. That becomes obvious as we read the rest of the New Testament and discover how the first followers of Jesus lived out His Great Commission. They went out to preach the Gospel and signs and wonders accompanied the Gospel proclamation.

Therefore perhaps I’ll change the name of our outreach team to: “The Healing & Converting Team” or “The Miracle and Evangelism Team”… Whatever!

It Is Both; Gospel Proclamation & Signs and Wonders.

However, it is also what we are about:

We should always want both with all our hearts; seeing people healed is AWESOME. We’ve had the privilege of seeing that as we went out to proclaim the Good News and lead people to Jesus. Seeing people come to faith and delivered from darkness, from bondage to sin and on their way to hell, that’s AWESOME too.

What does God want?

That’s the bottom-line question: What does the LORD desire? He wants ALL: He wants people everywhere to REPENT and TRUST in His Son Jesus for Salvation. That’s God’s PRIMARY (Highest agenda). He sent Jesus into this world to rescue men from Hell. He died in order to fulfil His mission. Yes he performed a few (many) miracles along the way, but His primary purpose was to SAVE. He’ll use both, miracles and proclamation of the Gospel to accomplish it. But we should never be tempted to think one is better than the other, they were always meant to accompany one another anyway.

We, both teams, the Healing Team and the Evangelism Team, were actually doing the SAME things anyway. However, what should our primary focus is to be? It’s my belief that our total commitment to Jesus should include; being obedient to His Commands and Serving the Lord with gladness. We’ll all use our gifts and skills to fulfill His Great Commission. Unlike Adrian Rogers who only wanted to be remembered for his proclamation of the Word in effectively leading souls to Jesus, I want that too, but I also want people to experience the miraculous. I’ve seen how one miracle can lead a whole family to the Lord.

It’s my experience that people come to the Lord in so many different ways; sometimes it is through a healing miracle, but other times it’s just a word that impacts their soul and heart. There is a TRUTH in the modern worship song “Just ONE touch of the KING, changes everything”… Just one touch from KING Jesus changes water into wine, cause a deaf person to hear, a blind person to see and a lame person to walk and leap for joy. Just one touch of the KING: Changes EVERYTHING in a person’s life.

Jesus is still in the LIFE TRANSFORMATION BUSINESS: He wants to do both; to HEAL and to DELIVER. With Jesus it was miracles and preaching the Kingdom, with the Apostles after Pentecost it was the same, we need to stay balanced and focused on following Jesus example and his commands.

Notice that in both versions of the great commission the emphasis is not on the miracles first, but on the proclamation of the Gospel. That’s God’s tool for bringing lost souls to Himself. It’s the Gospel that has the power to Salvation. We can heal people and they’ll get healed, but imagine healing someone and then not bringing them to faith and trust in Jesus Christ? That would be a terrible tragedy wouldn’t it?

I’ve seen it happen before, a great miracle whilst on an Evangelistic Mission in Cornwall. A woman who’d been wheelchair bound for years was healed instantly. But she did not come to trust Jesus as her Saviour. As a result of her healing the husband did trust Jesus and began attending church, but she went out dancing and lived a reckless loose life, they eventually divorced because of her adultery. Jesus didn’t take her healing away, but she also didn’t become a follower of Jesus. What a tragedy! Yes, let’s go out and heal, but let us also remember that Jesus called us to make Disciples and to lead people to faith and trust in Him, that’s got to be our PRIMARY focus, purpose, calling and reason for going out: In order that many people will be coming to faith and trust in the Living Lord Jesus Christ as their Lord and Saviour.  Amen!

Have an awesome week with Jesus,

Mark 16:14-20. The Great Commission.
14  Later Jesus appeared to the Eleven as they were eating; he rebuked them for their lack of faith and their stubborn refusal to believe those who had seen him after he had risen.
15  He said to them, “Go into all the world and preach the good news to all creation.
16  Whoever believes and is baptised will be saved, but whoever does not believe will be condemned.
17  And these signs will accompany those who believe: In my name they will drive out demons; they will speak in new tongues;
18  they will pick up snakes with their hands; and when they drink deadly poison, it will not hurt them at all; they will place their hands on sick people, and they will get well.”
19  After the Lord Jesus had spoken to them, he was taken up into heaven and he sat at the right hand of God.
20  Then the disciples went out and preached everywhere, and the Lord worked with them and confirmed his word by the signs that accompanied it.

Matthew 28:16-20 The Great Commission.
16  Then the eleven disciples went to Galilee, to the mountain where Jesus had told them to go.
17  When they saw him, they worshipped him; but some doubted.
18  Then Jesus came to them and said, “All authority in heaven and on earth has been given to me.
19  Therefore go and make disciples of all nations, baptising them in the name of the Father and of the Son and of the Holy Spirit,
20  and teaching them to obey everything I have commanded you. And surely I am with you always, to the very end of the age.”