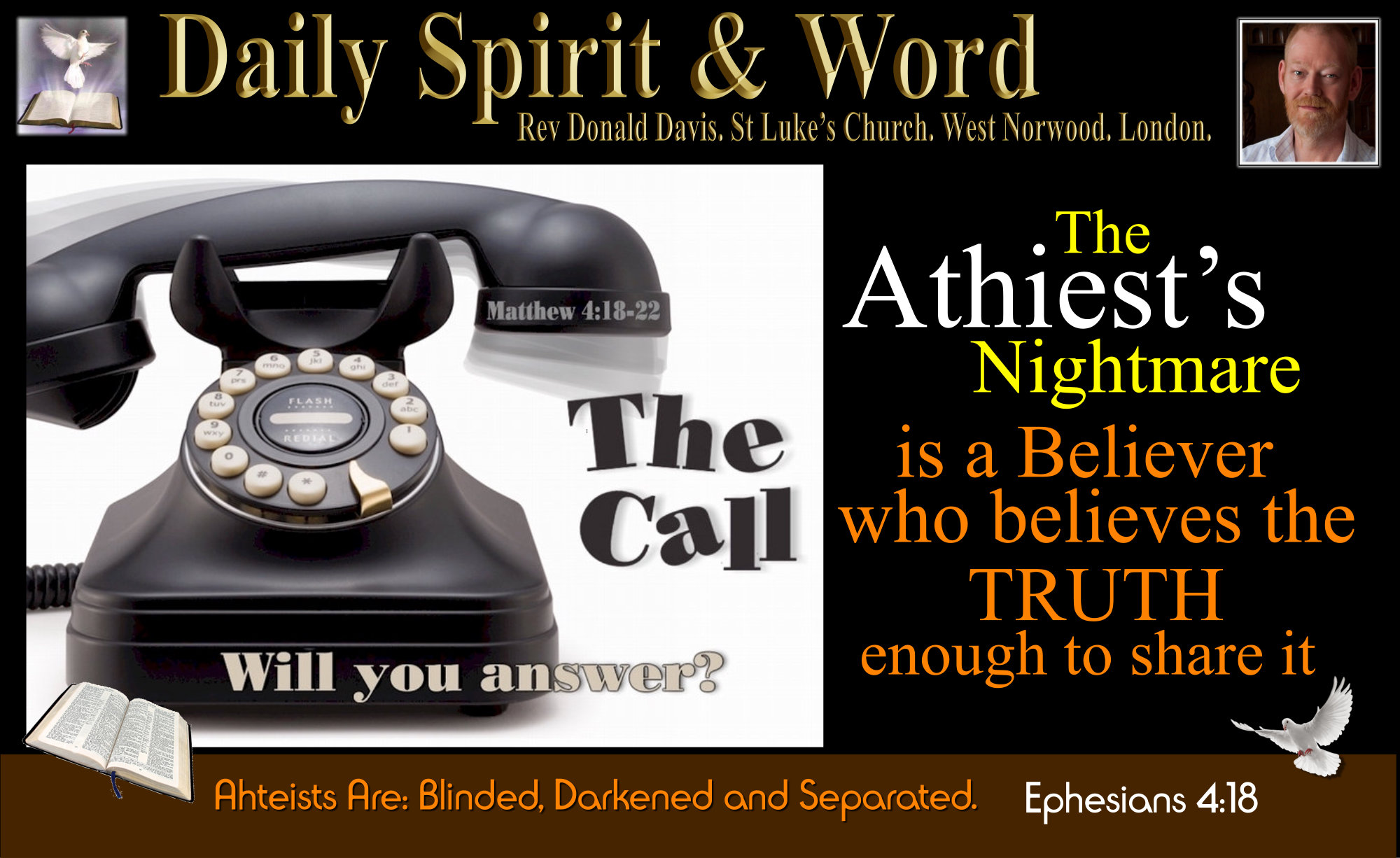 Is a Believer and Follower of Jesus, who knows the Truth and believes it enough to begin to share it.

Ephesians 4:18 (NIV) “They are darkened in their understanding and separated from the life of God because of the ignorance that is in them due to the hardening of their hearts.”

Last Wednesday evening we met an Atheist, he was one of the most intelligent and polite men I’ve met in a very long time. We have a little intelligence test, David went through all our trick questions and the Atheist got them ALL correct. There was no way we were going to fool this man. But it brought a smile to his face and warmed his heart. He loved debating.

On Sunday evening we attended a little session on putting on the Gospel Armour: You know the song, “Each Piece Put ON With Prayer”… i.e. we’re not to mechanically or ritualistically put the armour on. Ephesians 6:10-20.

We were reminded that our greatest BATTLE is not against flesh and blood: look what our battle is against: Whenever you open your mouth for Jesus there the battle rages. Once you decide in you heart “I’m going to share Jesus with this person, in this situation, right now” Then the missiles of the enemy begin to fly… but why? It’s because,  Ephesians 6:12 (NIV) “For our struggle is not against flesh and blood, but against the rulers, against the authorities, against the powers of this dark world and against the spiritual forces of evil in the heavenly realms.”

This DARK WORLD: the rulers, authorities and powers of this dark world: These are the people empowered by SATAN: The battle is not against those people, but the SPIRIT and EVIL that’s empowering them. They don’t even know it, they are unaware of it, they are DARKENED in their understanding. Ephesians 4:18 and BLIND to their condition, 2 Corinthians 4:4.

AND: The Spiritual Forces of EVIL in the HEAVENLY REALMS:  i.e. Satan and all his demonic army.

We can have ‘nice’ debates with people, we could get into logical arguments, but in the end it’s the LIGHT of Jesus Christ they need, not to be won over by argument. I keep repeating this little phrase to myself when engaged in debate, “Win an argument and you loose a friend”… We’ve just taken time to build friendship with that man or woman (be it only for a few minutes), so why ruin that hard won friendship by winning an argument? Let him win, let her win, then move onto the Gospel. I’d much rather loose a debate and win a soul for Jesus Christ. WHY? Because they’ve been blinded by Satan. They’re darkened in their understanding (they just don’t KNOW they are in the darkness, they a also Blindly Unaware) so just give them some awesome, bright, shining light. Let them see again, we can SOFTEN any heart with Jesus POWER. And we can bring LIGHT of understanding to any soul.

Take them by the hand and lead them out of their dreadful darkness, guide them into the light, usher them into the presence of Jesus Christ.

YBH: “Yes, but HOW?” There is POWER in Gospel Words.

How does an Ardent Atheist get faith? The same way anybody else gets faith: Faith comes by hearing God’s Word…

Romans 10:17 (NIV) “Consequently, faith comes from hearing the message, and the message is heard through the word of Christ.”

The message is heard through the WORD OF CHRIST. (THE WORD OF GOD).

AND: FAITH comes by hearing that message.

Sometimes it is almost physically observable when I see a person getting the LIGHT: When sharing the good news every week, we’ll observe the moment when the LIGHT goes on in a person’s soul. Suddenly they get it! I’ve been watching the physical reactions when we go through God’s LAW: A man suddenly puts his hand over his mouth. It’s like he’s got to stop trying to justify himself. A woman’s eyes well up with tears and she just goes silent for a few moments, then declares, “So we’re all sinners, we’re all doomed”… It’s such a wonderful moment when someone is brought into the light of understanding and knowing.

SEPARATED FROM THE LIFE OF GOD.

They are not just DARKENED and BLINDED, they are SEPARATED from the life of God.

Ephesians 4:18 (NIV) “They are darkened in their understanding and separated from the life of God because of the ignorance that is in them due to the hardening of their hearts.”

They are also SEPARATED because of the ignorance in them, due to the hardening of their hearts.

So what does a HARDENED HEART need? It needs to be SOFTENED…

A hardened heart must be marinated in the WATER of The Word of God: It takes time to allow the WORD to penetrate a hard heart. Sometimes as long as five minutes 🙂

I’ve heard some people say “My husband’s heart must be like granite (Granite has unyielding firmness, it’s impervious to water)” Granite can’t be penetrated by water that’s why so many people choose granite for worktops in their kitchens. However, no human heart is so hard that it cannot be penetrated with the WORD of God. It goes past the outer surface and penetrates right to the core of the soul.

My friends, it’s not that they have hearts that are too tough or hard, but it’s US (Believers and Followers of Jesus) who don’t have enough faith in the POWER of God’s Word to do it’s WORK. Just believe in the power of God’s Word. Accept that when you are sharing Jesus, He’s already beginning to draw that soul from darkness into His marvellous light. We are never working alone, the POWER of Jesus is working right with you the moment you open your mouth to share the Good News with someone, Jesus is beginning to work on their hearts.

KNOW THE TRUTH (Jesus) AND THE TRUTH WILL SET YOU FREE.

It’s not just the Darkened, Blinded and Separated sinner who needs to know the TRUTH, but we Christians also need to BELIEVE and TRUST the TRUTH (Jesus). He’s with you! Do you believe and trust in that? I mean really believe it and trust it. If you begin to accept this truth, then I’m certain you are going to see many more of your friends, family, neighbours and workmates come to faith in Jesus Christ. It’s an Atheist’s nightmare when an Believer not only KNOWS the TRUTH, but BELIEVES him enough to share it.

Why is it a NIGHTMARE for them?

Because an Ardent Honest Atheist believes he knows there is NO GOD… He’s looked at all the available evidence and can’t find God. It’s not surprising to someone who knows God though, because we know they can’t see or know God for the simple reason they a BLIND and a blinded person cannot see. They are DARKENED in their understanding, because of their HARD HEARTS, so they cannot understand either. They are separated from the LIFE of God, so they are DEAD in their transgressions and sins.

Hebrews 4:12 (NIV) “For the word of God is living and active. Sharper than any double-edged sword, it penetrates even to dividing soul and spirit, joints and marrow; it judges the thoughts and attitudes of the heart.”

Oh my friends, if Christians can grasp this TRUTH, they’re going to see so many souls SAVED by Jesus. Those Dehydrated Souls Need The Living Water of God’s Word.

So don’t get alarmed when you encounter an Atheist, get the compassion of Jesus and lead them into the light, let Jesus open their blinded eyes and soften their hardened hearts with the gentle word of the Saviour of the World. Like my dried mushrooms, plunge them into the WORD of God. Soak them in it and watch their understanding be expanded, watch the LIFE of God beginning to take shape and form in their WORD enlightened and softened souls. Amen!

NOTE: I was given this message by the LORD today. I believe there are many Christians who need to know the power that is in them.
So many of our brothers and sisters in Christ need the assurance and confidence to share Jesus. This world’s powers, infected by the Evil forces in the Heavenly realms, don’t want you to be sharing Jesus today. They hate it of course, that’s why a man, training to be a Social Worker, was thrown out of University because of his Christian beliefs, it seems you can’t be a Christian in Public office today in the UK. You can’t share your faith with a Muslim colleague either, a Nurse lost her job because she gave a booklet to a Muslim colleague and invited her to church. Oh my friends, the BATTLE is most definitely on, but don’t be SILENCED or feel threatened. Jesus will give you the words you need when you are dragged before the Magistrates. He will be with you encouraging you and strengthening you in the BATTLE. The souls of those in the darkness are too precious to worry about the personal consequences of leading them into the light. That’s why Jesus said, “Take up your Cross Daily and follow me”… We are to die to self and live for Him.

The Worship Song: “Just One Touch From the King”

In verse 2: I believe that worship song is prophetic of our Nation today.

All they need is JUST ONE, just one touch from the KING, then they’ll KNOW too.
They’ll be set free from the deep darkness, blindness, separation from the life of God.
Just ONE TOUCH FROM THE KING: The Lord Jesus Christ.
His POWER is in YOU!

Be fully blessed today,
Don.
Worship Song: “Just One Touch From the KING”.