And the World Will Stand AGOG in Amazement.

Enduring the Fire Leads to Promotion. 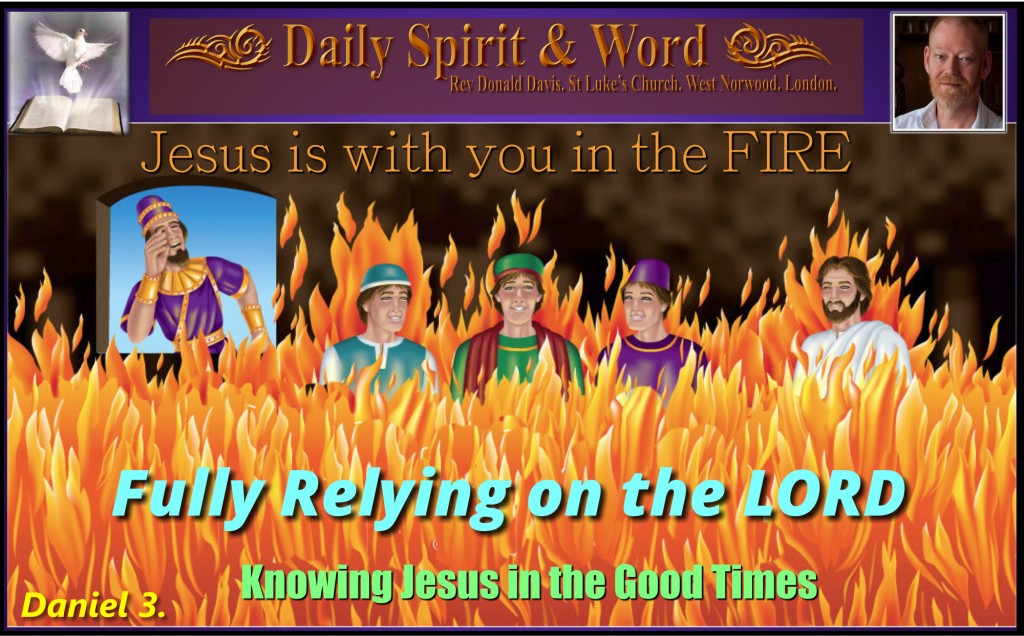 Good morning everyone, sorry it’s a bit late today. We held the PCC (Parochial Church Council) here last night, didn’t finish till late and I slept like a baby 🙂
Yesterday we read through Daniel 3, the account of The Golden Statue set up by King Nebuchadnezzar, he gave an order that everybody from every nation should bow down and worship the statue (idol), but some of his wise men noticed that the Jews, namely; Shadrach, Meshach and Abednego didn’t comply with the order.
As I meditated upon this chapter yesterday, I wondered what might possibly have made these Jewish boys to bold? What could have made them willing to loose their lives? Then reflecting back over chapter two, when Daniel told them to pray when they were once again in danger of loosing their lives, they prayed and the LORD gave Daniel the King’s Dream and it’s meaning.
Revelation:
Then the answer came to me, it wasn’t only Daniel who got the REVELATION, but also Shadrach, Meshach and Abednego, because they knew the LORD speaks to people when they pray, they knew from experience that God listens, that God is alive, that God acts when people devote themselves to His cause, His honour, His glory.
Application:
Whenever we face a perplexing or dangerous or troublesome decision, what have we go in our bag of spiritual goodies that will enable us to be bold, decisive and devoted to the LORD? We need our own REVELATION from the LORD of who He is, what He is like and how we can trust in Him.
Just like Shadrach, Meshach and Abednego, we’ve probably all got little miracles that have proved to us God loves us, he listens to us, he acted in the past in our life and that encouraged our faith and our commitment to Him. Therefore, like Shadrach, Meshach and Abednego, we’ll turn to prayer, praise and worship for a solution in those difficult situations.
Knowing God and knowing His ways are KEY, but so is being prepared to take a stand against our enemies when they rear their ugly heads.
Think about those poor brothers and sisters in Christ in Iraq and Syria, Christians who rather than being forcefully converted to Islam chose to die rather than live a lie. They knew Jesus Christ as LORD and couldn’t deny Him. Their love for the Lord was much stronger than their fear of death. They knew like Shadrach, Meshach and Abednego that the LORD would either rescue them or honour them in Paradise, but even if they lost their lives they’d live forever in Heaven with Jesus.
Shadrach, Meshach and Abednego are wonderful examples of fully relying upon God in the face of imminent death.
Well, we know the story, how they were thrown into the fiery pit but survived in such an amazing, awesome and astounding MIRACLE. Their clothes didn’t even smell of the smoke of the furnace. WOWzer!
My friends, that gives me so much encouragement today. Believe me that a time is coming when the relative peace and calm that Christians enjoy here in the UK will not last forever. I’m praying for our Nation, that it will one day experience a true Godly revival, but all the sings are that we are in the End Times, the return of the LORD is imminent, the Bible warns us about these days we are living in:
The LAST DAYS
2 Timothy 3:1-17
1 But mark this: There will be terrible times in the last days.
2  People will be lovers of themselves, lovers of money, boastful, proud, abusive, disobedient to their parents, ungrateful, unholy,
3  without love, unforgiving, slanderous, without self-control, brutal, not lovers of the good,
4  treacherous, rash, conceited, lovers of pleasure rather than lovers of God—
5  having a form of godliness but denying its power. Have nothing to do with them.
6  They are the kind who worm their way into homes and gain control over weak-willed women, who are loaded down with sins and are swayed by all kinds of evil desires,
7  always learning but never able to acknowledge the truth.
8  Just as Jannes and Jambres opposed Moses, so also these men oppose the truth—men of depraved minds, who, as far as the faith is concerned, are rejected.
9  But they will not get very far because, as in the case of those men, their folly will be clear to everyone.