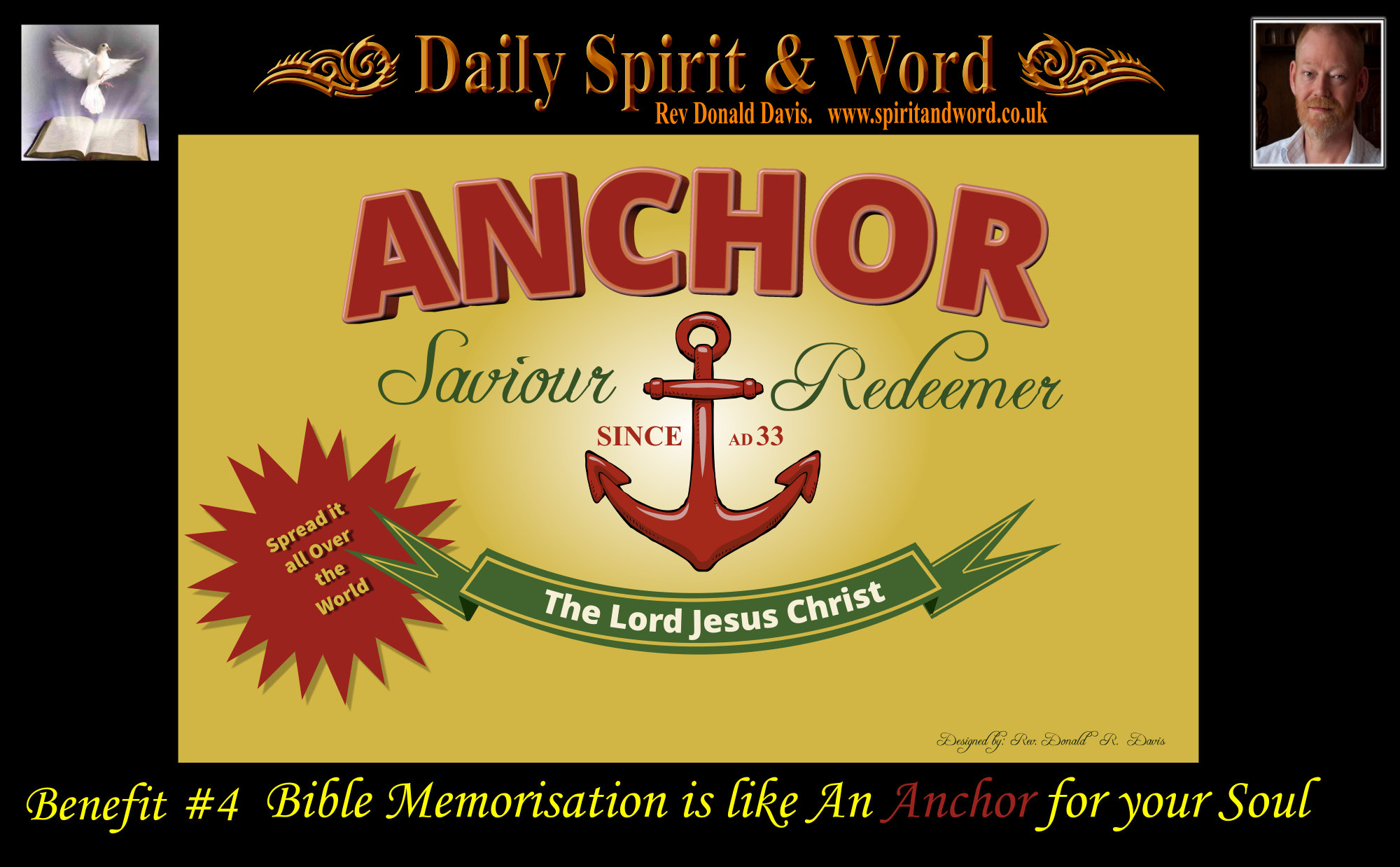 Benefit #5 God’s Word in your heart is like an anchor for your soul.

You know the old Hymn: “Will Your Anchor Hold”?

We have an anchor that keeps the soul

Steadfast and sure while the billows roll,

Fastened to the Rock which cannot move,

Grounded firm and deep in the Savior’s love.

That Question: Will your anchor hold? Will you remain steadfast following the Lord through all the storms and waves and temptations of this life?

An good, heavy anchor can hold a mighty ship when the storms come.

Fastened to the Rock: The rock that the Hymn is talking about is Jesus Christ. The Bible reveals that He was the ‘rock in the wilderness’ that Moses struck to get water for the people of Israel in the desert, He was also the rock that Moses was placed in a crevice by the LORD as He passed Moses by. Jesus is the rock that makes men stumble, He’s the Cornerstone of the building. Is Jesus YOUR Rock today. Are you holding onto Him as a ship’s anchor does to the rocks at the bottom of the sea. A ship depended upon the anchor getting a good grip upon the rocks.

“When I was in the Navy, one of the games played aboard ship was the anchor pool. Each participating sailor would put in his money and guess what time we would drop anchor as we came into port. The exact time was always recorded in the ship’s log, and the closest guesser would win the pool.

It seemed innocent enough at the time, and my shipmates would encourage me to join in–”Ah, Crawford, be a sport.” I realized later that they couldn’t care less about me being a sport; they wanted my money. But I decided I would not get involved, and I memorized some passages to strengthen my conviction.

One was Proverbs 13:11–”Wealth gotten by vanity shall be diminished; but he that gathereth by labour shall increase.”

Another was Proverbs 23:5–”Wilt thou set thine eyes upon that which is not? For riches certainly make themselves wings; they fly away, as an eagle toward heaven.” Not only was it wrong to win money by gambling, but I wouldn’t be able to keep it anyway.”  “An Anchor for Your Heart.” by John W. Crawford Discipleship Journal Issue #9 May/June 1982.

My friends, when we get into the GREAT HABIT of Embedding God’s Word in our hearts the way John Crawford did, we’ll be fast-tracking our way to Christian Spiritual Maturity.

Robert Morgan said, “The practice of memorizing and meditating on the Bible is the primary way to accelerate spiritual growth in your life. It speeds up the transformation process and leads to holier habits. After all, spiritual maturity is simply thinking more as God thinks; so as we implant His thoughts into our minds, using Scripture memory, and as we use the process of meditation to convert those verses into regular thought patterns, we’re developing the mind of Christ (Phil. 2:5), yielding mature thoughts, pure habits, and holier lives. The psalmist said, “Your word I have hidden in my heart, that I might not sin against You” (Ps. 119:11 NKJV).” From; “100 Bible Verses Everyone Should Know by Heart.” by Robert J Morgan.

So we’ll become more like Jesus the more we know and think like Him. Spending precious time in His presence and in His Word will produce spiritual growth. I’ve seen this in many people over the years since I’ve been following the Lord Jesus. So many of my friends have fallen back into the world, given into sin, self and the world’s ways of living. Having talked, counselled and challenged many of them, I’ve become convinced of this; It’s because they left off personal time with Jesus, they didn’t get into God’s Word and they didn’t get God’s Word into their hearts or heads.

There have been times when I’ve stopped my daily time with Jesus, either through work of pressures in life, each time I have, I’ve felt the tendency and temptation to fall away increase. Thankfully, Jesus doesn’t leave me alone too long and by His Holy Spirit, He brings conviction and reveals what’s happened and leads me back into the narrow way.

Having served in the Royal Navy on Ships and Submarines, I love the Bible’s naval terminology, I love the old hymns that speak of anchors, storms of life, waves, billows, etc… They speak to me because I’ve experienced them and they do help to keep me on the Lord’s narrow pathway that leads to eternal life.

Part ll of “Will Your Anchor Hold? on Monday.

Have an awesome Saturday with your family, friends, fellowship and the Lord.

Sunday is the Lord’s Day: Don’t neglect the gathering of the Saints as some are in the habit of doing and have shipwrecked their faith.

Every blessing in Jesus name,