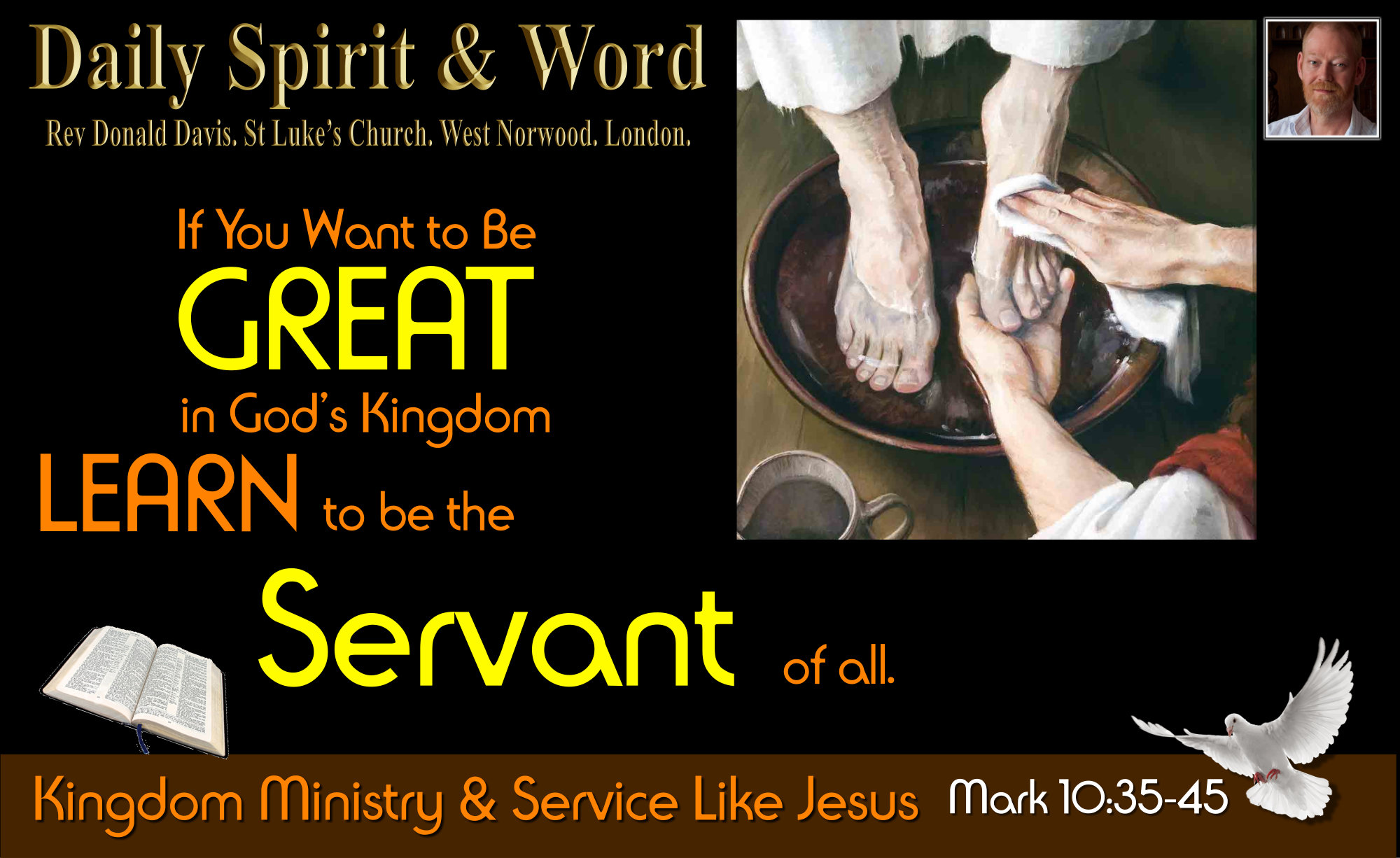 If You Want To Be Great In God’s Kingdom,

Learn to be the Servant, Slave, Minister (Deacon) of Everyone.

Good morning my friends, I’ve been on holiday for a few weeks now, I’m learning afresh what it means to be a SERVANT of Jesus Christ.

We stayed in a Hotel that trains students to become Hotel Managers etc… The whole focus of the place was on SERVICE, giving the customer the best service… I thought about that, that’s what God’s Kingdom Service is like too, being the BEST SERVANT you can be for Jesus.

It’s not about position, power, prestige or personal glory, but learning to be and striving to be just like Jesus Christ. Jesus said, “…whoever wants to be first must be slave of all” Mark 10:44. And Jesus went onto say, “For even the Son of Man (Himself) did not come to be served, but to serve (Minister, Slave, Servant), and give his life as a ransom for many.” Mark 10:45.

Being GREAT in God’s Kingdom: Means being or having a SERVANT Mentality, SERVANT Attitude, SERVANT Character; just like Jesus. Be honest with yourself today, who is it that stands out for you in your fellowship, church, group of Christians that you know well? Who is the most like Jesus Christ in your circle of brothers and sisters in Christ? They will be self-effacing, serving others, others orientated, thinking of others more than themselves.

Far too often in Church (fellowships), we get it so wrong; we think it is all about titles, positions, power, and a great name amongst our brothers and sisters. We want to stand out and be known for our closeness to Jesus. Imagine what it must have been like to be one of the other TEN when James and John approached Jesus to ask to be His right and left-hand men?

Mark 10:35-45 (NIV)
35  Then James and John, the sons of Zebedee, came to him. “Teacher,” they said, “we want you to do for us whatever we ask.”
36  “What do you want me to do for you?” he asked.
37  They replied, “Let one of us sit at your right and the other at your left in your glory.”
38  “You don’t know what you are asking,” Jesus said. “Can you drink the cup I drink or be baptised with the baptism I am baptised with?”
39  “We can,” they answered. Jesus said to them, “You will drink the cup I drink and be baptised with the baptism I am baptised with,
40  but to sit at my right or left is not for me to grant. These places belong to those for whom they have been prepared.”
41  When the ten heard about this, they became indignant with James and John.
42  Jesus called them together and said, “You know that those who are regarded as rulers of the Gentiles lord it over them, and their high officials exercise authority over them.
43  Not so with you. Instead, whoever wants to become great among you must be your servant,
44  and whoever wants to be first must be slave of all.
45  For even the Son of Man did not come to be served, but to serve, and to give his life as a ransom for many.”

In the Passage above The Disciples Demonstrated SELFISH AMBITION:

Philippians 2:3-8 (NIV)
3  Do nothing out of selfish ambition or vain conceit, but in humility consider others better than yourselves.
4  Each of you should look not only to your own interests, but also to the interests of others.
5  Your attitude should be the same as that of Christ Jesus:
6  Who, being in very nature God, did not consider equality with God something to be grasped,
7  but made himself nothing, taking the very nature of a servant, being made in human likeness.
8  And being found in appearance as a man, he humbled himself and became obedient to death—even death on a cross!

My friends, we are not in competition with one another, we are to seek to make others even better disciples than ourselves. If someone you are leading to Jesus goes onto be even greater in God’s Kingdom than you’ve ever been, don’t get jealous, feel honoured that Jesus has allowed you to be just like Himself. Remember what Jesus said of His own disciples, “You will do even greater things than I have been doing”… What an awesome SERVANT attitude to have, to strive to make others even better than you are. Have I got the same attitude as Jesus?

So if you want to be GREAT in God’s Kingdom; and you should want that my friends, then we must strive to be the servant, slave, minister, deacon of ALL.

Now being a SLAVE or SERVANT is WONDERFUL.

When you get it, you’ll be SET FREE from striving, competition, seeking to be better than others…

This really touched me the other day; From a little book called “Ministry Is”

“Notice that Jesus said real greatness comes from being a “servant” (διακονος) and a “slave” (δουλος). Jesus wanted His young followers to understand that unlike the world system, when it comes to Christian leadership, the measure of real success is service. It is being willing to get dirty in order to benefit others.

If Jesus’ words were not enough, He wanted them to consider His example. After all, if Jesus Himself left His high position to serve and sacrifice for us, shouldn’t we, as His disciples, do the same?

For even the Son of Man did not come to be served, but to serve, and to give His life—a ransom for many. (Mark 10:45)

Jesus is God. Prior to coming to Bethlehem, He had existed in heaven throughout all eternity. As God, He was the richest, most powerful being in the universe. Angels served His every need. Yet, when He came to earth, He did not come to be served but to serve.

Jesus did more than come to serve. He also came to give, and not just a convenient, comfortable amount. He gave it all. He gave His life in order to provide a ransom for our sins. ”

Ministry Is…: How to Serve Jesus with Passion and Confidence.

You say you’re a servant of Jesus Christ, show me your scars.

God is not necessarily looking for leaders, at least not in the sense we generally think of leaders. He is looking for servants (Isa 59:16; Ezek 22:30). When God finds men and women willing to be molded into his servants, the possibilities are limitless.

Ministers are servants who lead and leaders who serve.

Being Great in God’s Kingdom: Is about getting down and dirty in order to lift others up higher, so they will be cleaner and more pure and …

My friends, Jesus was God, but he took the form of a servant and came to earth to give His life.

Have you noticed in Rugby when there’s a line-out for a throw in, some in the line will lift one of their fellows up higher to catch the ball. That’s what Kingdom Service is like, enabling others and lifting them up in order to win the prize.

Have an awesome day my friends, Ministering for Jesus and God’s Kingdom.

Stay close to Jesus, be full of the Holy Spirit and let’s make some DUST by our Kingdom Service today, Amen.

Dave said, “I once spoke at a church that was exploding in growth by reaching public university students with the gospel. I was somewhat surprised to see several obviously postcollege age adults diligently serving the students as they arrived. The pastor of the church pulled me aside and commented that the cheerful man carrying the chairs was the city manager, the smiling gentlemen at the door welcoming every guest was a downtown lawyer, the grinning man taking the offering was a distinguished professor, and the happy lady running the nursery was a nurse. Each was also a member of the leadership team.

Unlike some churches that nominate and vote on deacons in a sort of popularity contest, they had a different approach. They chose those who were the greatest servants. The pastor said that they looked for “a cloud of dust” and selected the ones who were so actively serving that they left “the cloud” in their wake. ”

Ministry Is…: How to Serve Jesus with Passion and Confidence.