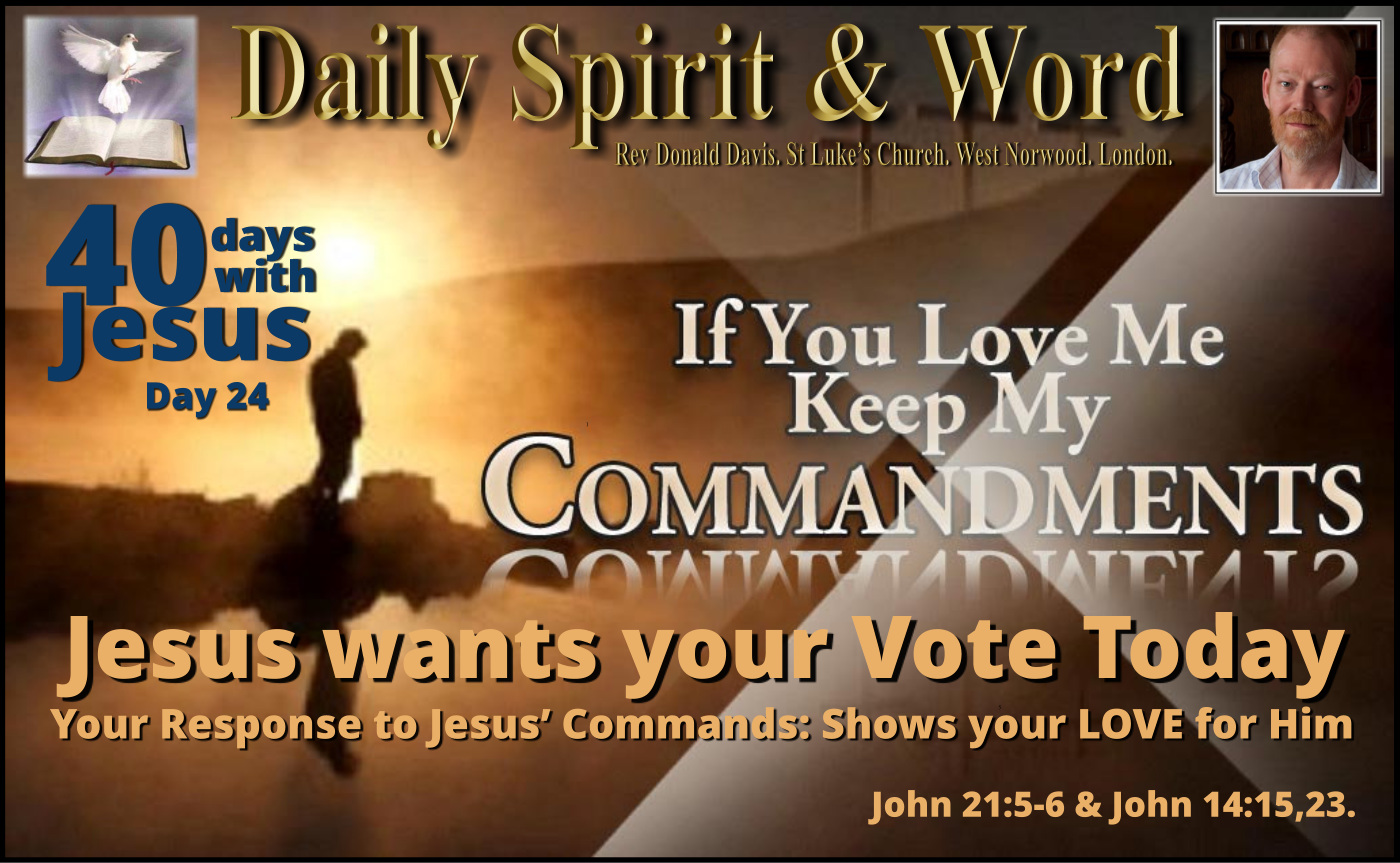 John 21:5-6 5  He called out to them, “Friends, haven’t you any fish?” “No,” they answered.
6  He said, “Throw your net on the right side of the boat and you will find some.” When they did, they were unable to haul the net in because of the large number of fish.

Good morning my friends, I wonder how many of you were waiting to hear the results of the Election and if the Party you voted for won? Well, today we’ll see that after all the political engagement and wooing of the Electorate has resulted in an amazing and surprising turn around in favour of the Conservatives. Ah well, we can’t always get what we hoped for. However, there is a way to ensure that you are on the winning side, that you put your cross in the right box, it’s when you respond to the wooing and engagement of the Lord Jesus.

Yesterday we observed that the Disciples had returned to fishing for fish rather than fishing for men, only to discover that they had failed at that too. Now Jesus, who’s been watching them from the shore initiates conversation.

So many people’s view of God is skewed, Just as the Conservatives tried to skew the view of Labour during their campaign. They were intent of creating an atmosphere of fear and it paid off for them. Satan has so skewed mankind’s view of God that we see Him as powerless, weak, distant and comical. He’s painted a picture of a God and most people have swollowed it hook-line-and-sinker: The Skewed View of God: He’s a Father figure with a great white fluffy beard, sitting upon a fluffy cloud, playing a little harp.

However, God’s not like that my friends; we have a God who’s intimately connected, concerned and creates moments when we can know that He right there when we need Him most in life. Jesus wasn’t just watching from the shore, and He’s not watching from a cloud now, but Jesus was waiting for the right moment to get the conversation going.

When Jesus asked that question, “Friends, haven’t you any fish?” He wasn’t asking because He didn’t know the answer (God knows everything, even our very thoughts), but all He was doing was initiating conversation. Notice also He doesn’t call them Apostles or Disciples or Worshippers, but ‘friends’. Do you know that Jesus is your friend too? He wants to be and if you’ve trusted Jesus as Lord, then He really is your friend, but not just any friend. He’s also watching your life, your hopes, your dreams, your aspirations in life and your failures too.

Jesus Cares About Your Problems:

When they answer Jesus with a simple, “NO!” The briefness in the response may indicate just how frustrated they were. When you’ve failed at something you’ve been trying hard at how do you respond to people’s questions? When my wife returned from taking her driving test, I could tell immediately from her face that she’d failed, but I asked that dreaded question, “How did it go?” She said very simply and curtly, “I’ve failed”. She didn’t need to say any more than that at that time, and I didn’t need to do anything else, but put my arms around her and assure her next time she’d pass. But her response was short and to the point. It was only later that she bagan to open up and tell me how the test actually went and how she almost passed.

Jesus  was their friend, He cares and He’s interested and wants to know. He’s your friend too and if you will hear Jesus’ voice today, you’ll hear him asking you, “Friend, how’s your life?” He’s not asking because He doesn’t know, He’s asking because He cares about you too.

Jesus Has The Solution to Your Failures:

When they said, “NO!” Jesus knew what to do about it. He told them to drop their net on the right side of the boat. Can you imagine that there would be fish on one side of the boat and not the other? How did Jesus know? The amazing thing in this Resurrection Appearance is that the disciples who’d been fishing all night, didn’t argue with Jesus. They listened to what He said and responded with obedience to His instruction.

When they responded to the Helper’s instruction they succeeded

Jesus said before He died, John 14:15 15  “If you love me, you will obey what I command.” When we respond to Jesus commands, we’re going to succeed too my friends. Jesus is your friend, but He’s also your LORD. He’s got things for you to do every single day, but He’s given us these commands so that we’ll know His power and presence in our lives. It’s when we’re obedient that Jesus knows that we love Him and in response Jesus has promised that the Holy Trinity will be right inside your life.

John 14:23-24 23  Jesus replied, “If anyone loves me, he will obey my teaching. My Father will love him, and we will come to him and make our home with him. 24  He who does not love me will not obey my teaching. These words you hear are not my own; they belong to the Father who sent me.”

So if we LOVE Jesus, we’ll be obedient to His commands. The disciples obviously didn’t know it was Jesus on the shore at this stage, but there was something about Jesus, something in His voice or manner that made then obey Him without question. It was only after they caught all those fish that the disciples realised that it was Jesus on the shore. They knew, because they’d been fishing all night and caught nothing, that this net full of fish was a miracle. Only Jesus could know where all the fish are, only Jesus could know that they’d catch so many. My friends, when you listen to Jesus voice today, you are going to do truly awesome things.

John 14:15-21 15  “If you love me, you will obey what I command.
16  And I will ask the Father, and he will give you another Counsellor to be with you for ever—
17  the Spirit of truth. The world cannot accept him, because it neither sees him nor knows him. But you know him, for he lives with you and will be in you.
18  I will not leave you as orphans; I will come to you.
19  Before long, the world will not see me any more, but you will see me. Because I live, you also will live.
20  On that day you will realise that I am in my Father, and you are in me, and I am in you.
21  Whoever has my commands and obeys them, he is the one who loves me. He who loves me will be loved by my Father, and I too will love him and show myself to him.”

What an awesome teaching today, Jesus is waiting for you to respond to His instructions my friends, He’s watching and waiting for the right moment to intervene in your life too and ensure that whatever you do in life will be a great success. So the question is, “Do YOU LOVE Jesus?” You’ll know the answer, one way to tell is to ask yourself this question right now; “Am I being OBEDIENT to everything that Jesus has commanded?”

The People have responded to the Election and made the Conservatives the largest party in the United Kingdom, but have you listened and responded to Jesus? Have you put your tick in the right box? Is Jesus your Friend? Do you know Him? Responding to the Helper is the most important thing you can do with your life today. Go on my friends, put your CROSS in Jesus Box and Vote for Jesus. Unlike the Conservatives who’ll probably fail and fall on their promises, Jesus will never, never let you down. He’ll never let you go and He’ll be there always, watching and waiting to Help and calling out to you with suggestions to how you can overcome and succeed in your life today. Are you responding to the helper’s instruction?

Have an amazing weekend my friends,

Day 24: Responding to the Helper.