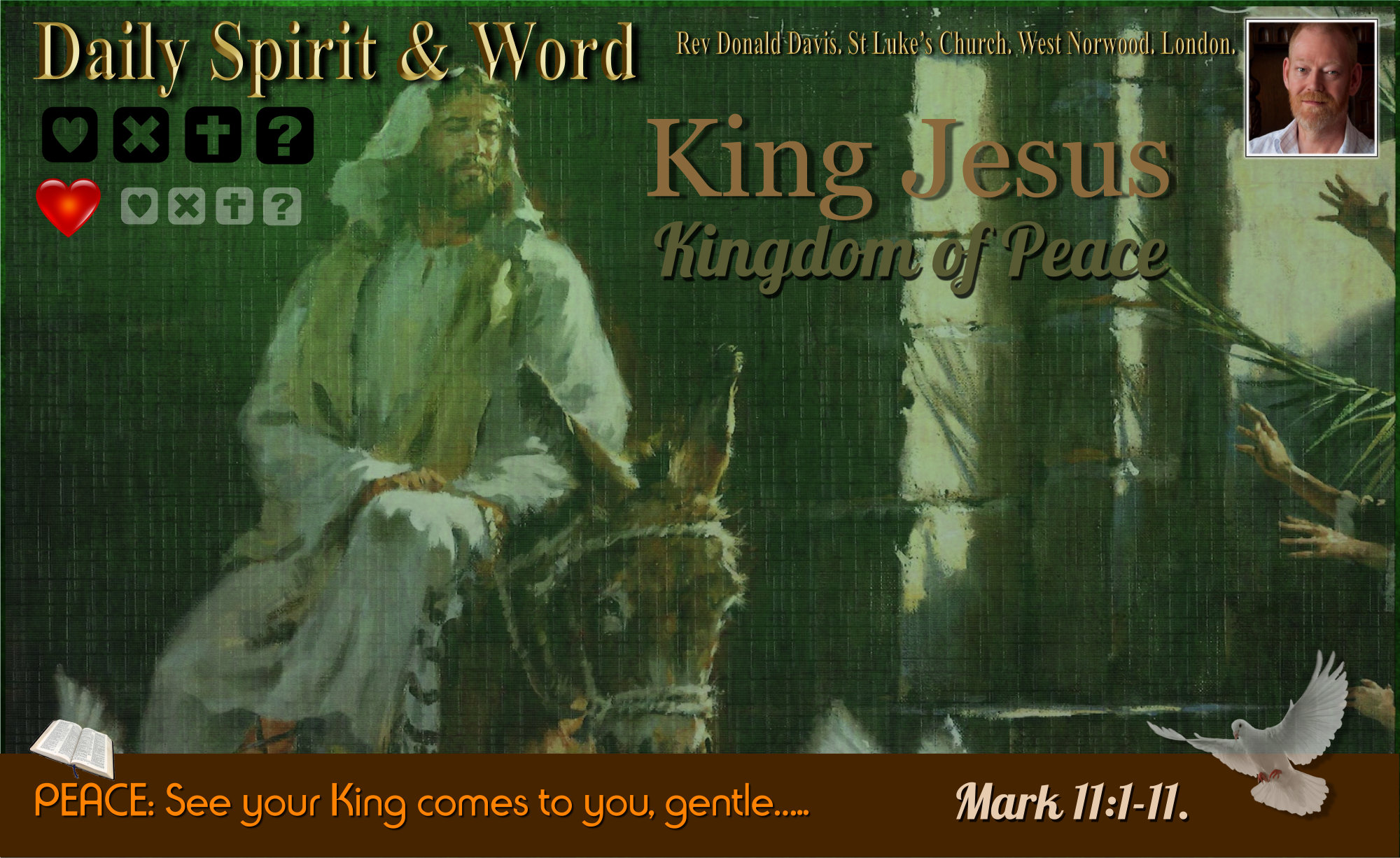 Good morning my friends, today we REMEMBER: It’s Remembrance Sunday, we’re gathering around the Memorial Cross outside the church today, which co-memorates those who died in times of war. However, we’re also thinking about our LORD Jesus, and Remembering that before His ultimate sacrifice, giving His life for all mankind, first He rode into Jerusalem just one week before He was arrested, faced a mock trial and was brutalised then put to death upon the Cross.

In riding into Jerusalem in such a way, in fulfilment of God’s purpose and design, foretold in the prophets such as Zechariah 9:9 above. In doing so, Jesus was allowing people now, because the time had come for him to die, to praise and worship Him as King, because He knew that this would enraged the Jewish authorities and seal his own fate.

2) Hear the Fulfilment of the Prophesy:

Mark 11:1-11 (NIV)
1  As they approached Jerusalem and came to Bethphage and Bethany at the Mount of Olives, Jesus sent two of his disciples,
2  saying to them, “Go to the village ahead of you, and just as you enter it, you will find a colt tied there, which no-one has ever ridden. Untie it and bring it here.
3  If anyone asks you, ‘Why are you doing this?’ tell him, ‘The Lord needs it and will send it back here shortly.’ “
4  They went and found a colt outside in the street, tied at a doorway. As they untied it,
5  some people standing there asked, “What are you doing, untying that colt?”
6  They answered as Jesus had told them to, and the people let them go.
7  When they brought the colt to Jesus and threw their cloaks over it, he sat on it.
8  Many people spread their cloaks on the road, while others spread branches they had cut in the fields.
9  Those who went ahead and those who followed shouted, “Hosanna!” “Blessed is he who comes in the name of the Lord!”
10  “Blessed is the coming kingdom of our father David!” “Hosanna in the highest!”
11  Jesus entered Jerusalem and went to the temple. He looked around at everything, but since it was already late, he went out to Bethany with the Twelve.

REMEMBER: Who Jesus is.

Jesus was always the KING: He is the KING of Kings: i.e. Remember the little book, our Queen gave her testimony and said, “Jesus is the KING that I serve”…

Men will go to war and give their lives in service of King and Country. Most go to war hoping to return, but in doing so, there’s always the great danger that by taking up arms, they will never return.

Jesus is heading into a WAR knowing in advance that He really is going to loose His life in the most cruel way.

Gentle and riding on a Donkey’s Colt.

Most Kings coming in Triumph would ride on a chariot or a white horse. However, just like King Solomon, Jesus comes as a King on a Donkey.

What’s So Important About A Donkey?

A King coming on a Donkey symbolised PEACE.

The mention of a donkey in Zechariah 9:9-10 fits the description of a king who would be “righteous and having salvation, gentle.” Rather than riding to war to conquer, this king would enter in peace.

Zechariah 9:9 Highlights the Gentleness of Jesus (The Coming King)

Zechariah 9:10 (NIV) “I will take away the chariots from Ephraim and the war-horses from Jerusalem, and the battle-bow will be broken. He will proclaim peace to the nations. His rule will extend from sea to sea and from the River to the ends of the earth.”

Note the many details symbolic of King Jesus’ PEACE:

Oh how we pray for a day when all wars will cease and true and lasting peace prevails. However, we know, that until Jesus Christ returns, there will, sadly, be many more wars, because the hearts of men have not yet been changed to hearts of peace. However:

NOTE: In contrast to the weapons of war above, the Christian’s weapons and the way we war is to be different now: 2 Corinthians 10:3-5.

When we pray the prayer, “Thy Kingdom Come”

We are declaring that God (Jesus) is our KING: And that we want to be His subjects in His Kingdom of PEACE and LOVE.

NOTE: Jesus is King and rules in a Kingdom of PEACE which is Universal (no borders).

Jesus Kingship recognises no borders, no other rulers, He is the KING of Kings and LORD of Lords. Jesus KINGDOM is not land-locked or land-based, but HEAVENLY and it is in the HEARTS of Men and Women over the Earth.

Today, we enjoy PEACE in the UK because of the sacrifice of so many in two World Wars.

In contrast to the forlorn hope of WAR-Won PEACE: We can receive a PEACE in our hearts today because Jesus won His battle. His is a lasting PEACE.

Today, we can enjoy LASTING PEACE: Because of Jesus sacrifice.

When Jesus entered Jerusalem, He allowed them, for the first time, to declare His Kingship.

Mark 11:9-10  “Those who went ahead and those who followed shouted, “Hosanna!” “Blessed is he who comes in the name of the Lord!” 10  “Blessed is the coming kingdom of our father David!” “Hosanna in the highest!”

So I’m asking you today:

If not, them make Jesus your KING right now: Enjoy PEACE in your soul. Be forgiven, be cleansed and freed from sin, receive the Kingdom of Peace.

If you have received the King of Peace, the Lord Jesus Christ, then know this;

PRAYER: On this Remembrance Sunday:

We PRAY for Jesus Christ’s PEACE to take up position in men’s hearts.

Let’s enroll in Jesus PEACE Army and take the message of PEACE and Good News to all men. Amen!

That war may cease, conflicts die, weapons used no more in anger. Amen!

We also remember the seven people who were killed this week in the tragic tram-car accident in Croydon just a few miles away from here. We stop to remember them outside and those, over fifty, who sustained serious injuries. Let’s pray for their families and ask the Lord to bring the comfort and peace that only He can bring in times of grief. Amen!

2 Corinthians 10:2-5 (NIV)
2  I beg you that when I come I may not have to be as bold as I expect to be towards some people who think that we live by the standards of this world.
3  For though we live in the world, we do not wage war as the world does.
4  The weapons we fight with are not the weapons of the world. On the contrary, they have divine power to demolish strongholds.
5  We demolish arguments and every pretension that sets itself up against the knowledge of God, and we take captive every thought to make it obedient to Christ.