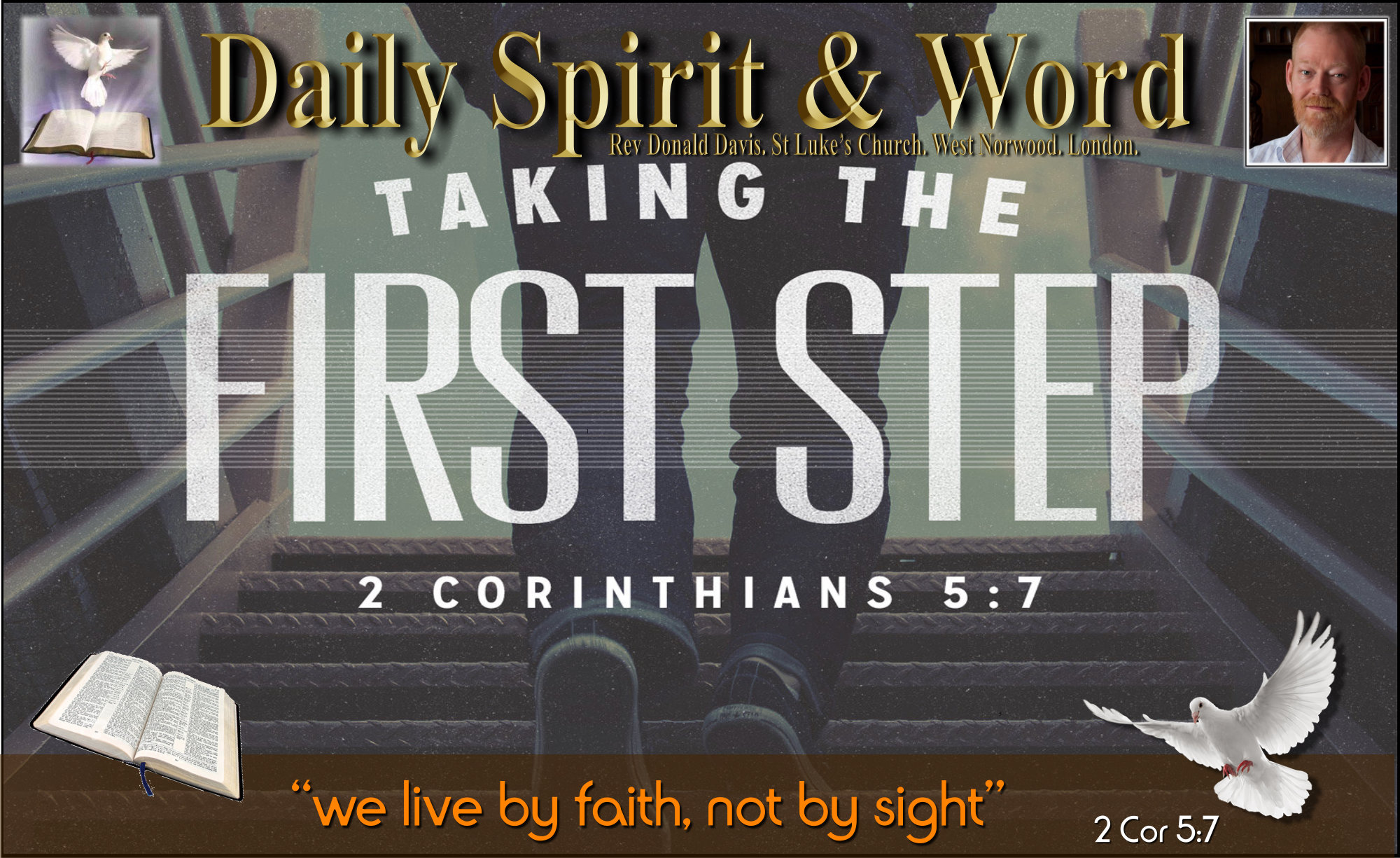 Have you ever been put-off because of what someone said? Have you stopped sharing Jesus with people? Many followers of Jesus today don’t believe in Evangelism. However, it was Jesus who commanded His followers to go into all the world. “Walk by Faith, not by sight”.

Matthew 5:11-12 (NIV)
11  “Blessed are you when people insult you, persecute you and falsely say all kinds of evil against you because of me12  Rejoice and be glad, because great is your reward in heaven, for in the same way they persecuted the prophets who were before you.

Good morning my friends, another awesome evening of Evangelism last night on the streets of West Norwood London. We were joined by a new member of the team, a lady who’s just joined our fellowship called Gwyneth, she teamed-up with me as it was her first time. We go out in twos and share the Gospel with anyone who’ll stop and have a chat.

Last night I was so up for it, but the week before, I was dreading going out, because it’s getting quite cold now in London. However, even though it was freezing last night, people did stop and chat; but most just received a little Gospel tract or a Ten Commandment Coin.

Though we had many conversations; ranging in duration from just a few words or seconds, to ten or fifteen minutes. One that stands out from last night was our last encounter, which was just in front of the Church when we were on our way back to meet up with the rest of the team. The man was standing, looking cold, waiting for his bus. Gwyneth offered him a Ticket to Heaven tract; he refused saying he didn’t believe in forcing ‘religion’ on anyone. He said, “I don’t think it’s right to go around trying to force people into any religion”.

In the past, if someone had said that to me, I’d probably have thanked them and moved on. However, the LORD has encouraged me over the years to be cheeky and ask questions about how people have arrived at their convictions. Thankfully, Gwyneth had obviously learned that lesson too.

I listened and Gwyneth explained, “We’re not out forcing the faith of Jesus, we’re sharing the Good News”… He remained steadfast in his conviction that it was wrong, stated that he was a Christian, and “A ‘real’ Christian keeps his faith private, and goes into his closet and prays secretly to his God.”

I’ve heard that many times before in my lifetime, but mainly from the older generation. I was surprised to be hearing it from a man so young. I said to him, “What do you think about the Disciples and followers of Jesus? They went out into all the world and proclaimed Jesus Gospel of Good News wherever they went?” He said, “I don’t agree with that, they mainly went to private places and shared with people who wanted to listen”. I said, “What about St Paul, who went into Market places and debated in public?” I explained, “Market places are pretty busy with lots of people just out doing business”…

Well, we went to and fro in our conversation like that for a while, until I sensed that it was the time to switch from the natural (argument, reasoning and discussion about ordinary things) to the Spiritual (discussing the Gospel of Jesus). I asked the man, “Do you believe in Heaven?” He said, “I don’t think about that too much, I’m a medical scientist”. Another red-herring was approaching 🙂 I kept him on track, “Eternity has been planted by God in your heart”. He looked at me in the strangest way, “It’s real, Heaven is real and God put it in you to know it’s real, that’s why there are so many religions in the world, everybody knows that this life is not all that there is”.

The man wouldn’t engage, so I switched back to the Natural again: “Do you pray for your patients?” He said, “No, I use science to cure them”. He didn’t think that his god would intervene, his god had given him the capacity to cure and know how to fix things for people.

He said, “I don’t pray, I use science to cure people”

Do you know what he had done? He had made a ‘god’ to suit himself. His god was not the God of the Bible. It was idolatry that He was suffereing from. Whenever you hear someone saying, “My god wouldn’t do this or my ‘god’ wouldn’t do that”, they’ve exchanged the God of the Bible for a convenient god of their own imaginations. It’s the most common form of idolatry that we come across today.

In our conversation, it became so evident that he was worshipping a false god of his own creation, there were so many aspects of Biblical Christianity that were obviously missing from his version of ‘faith’. He’d arrived at convictions and practices that are convenient, easy, un-challenging and unreal. His version of faith meant he could be a secret Christian, who didn’t need to call upon his god, and that Heaven and Hell wasn’t real.

Before we could share the TRUE Gospel with the man, his bus that he was waiting for had arrived. I quickly thanked him for speaking with us and gave him one of our tracts that says, “Thank you for listening”. It’s got a picture of a dog with big ears. It always makes people smile. But on the back it has the Good News of Jesus. I said, “Will you read this when you get home?” He took the tract. I hope and pray that he’ll think deeply about our conversation and that he will read the tract. I believe he will, because he was obviously a deep-thinking man.

The one phrase that I know God planted in his heart last night, that made a deep impact crater upon his soul was, “God has planted eternity in your heart”… His countenance changed when I said that, his mouth stopped for a moment.

The TRUTH has a way of stopping the mouths of unbelievers, but you’ll only see it if you are out doing what Jesus commanded, sharing the Good News.

Ecclesiastes 3:10-11 (NIV)
10  I have seen the burden God has laid on men. 11  He has made everything beautiful in its time. He has also set eternity in the hearts of men; yet they cannot fathom what God has done from beginning to end.

God has PLANTED ETERNITY: men, mankind, human beings; we all KNOW that this life is not the end.

God Shuts The MOUTH: Of the Self-Righteous.

Romans 3:17-20 (NIV)
17  and the way of peace they do not know.”
18  “There is no fear of God before their eyes.”
19  Now we know that whatever the law says, it says to those who are under the law, so that every mouth may be silenced and the whole world held accountable to God.
20  Therefore no-one will be declared righteous in his sight by observing the law; rather, through the law we become conscious of sin.

It’s amazing when you actually see God doing this to someone, when the TRUTH hits home or lands in their soul in such a powerful way that their mouth goes silent. There’s a physical change that takes place in a person. You can see it hitting home. Praise the LORD!

So, my friends, don’t be put-off when someone says something FALSE about what you are doing for Jesus.

Matthew 5:11-12 (NIV “Blessed are you when people insult you, persecute you and falsely say all kinds of evil against you because of me. 12  Rejoice and be glad, because great is your reward in heaven, for in the same way they persecuted the prophets who were before you.”

That “rejoice and be glad” in the verse above: in the Greek of the New Testament it literally means “Leap and jump for joy”… The KJV says “be exceedingly glad”.. It’s amazing, but the LORD puts His deep joy in your heart when you know an attack is coming because you’re walking in obedience with Jesus.

We’re learning, slowly, not to get angry when someone says something false about what we are doing for Jesus. The man last night said, “You shouldn’t force people into religion”. With every lie of Satan, there’s also an element of truth. Of course we shouldn’t force anyone, we can’t make a convert by force. Only the Holy Spirit brings conviction and converts a person. However, by going out and sharing the Good News of Jesus on the streets with people, we’re NOT ‘forcing’ anyone, we’re just being obedient to Jesus command to go. The man made that statement before we’d barely spoken a word to him about Jesus. Of course it was a ‘false’ statement, a lie from Satan, designed to cause us to doubt what we were doing. Thankfully, Gweneth and I were not put-off or dismayed by it for a moment.

Gwyneth and I, and the rest of the team REJOICED last night.

We’d been out sharing the Good News of Jesus. We know that the LORD’S promises hold true;

Isaiah 55:10-12 (NIV)
10  As the rain and the snow come down from heaven, and do not return to it without watering the earth and making it bud and flourish, so that it yields seed for the sower and bread for the eater,
11  so is my word that goes out from my mouth: It will not return to me empty, but will accomplish what I desire and achieve the purpose for which I sent it.
12  You will go out in joy and be led forth in peace; the mountains and hills will burst into song before you, and all the trees of the field will clap their hands.

“It shall not return to me void.” God will use the WORD planted in people’s hearts. He will accomplish what He desires. All He requires of us is that we be willing to be obedient to His Command to GO and to SPEAK the Gospel for Him! Amen.

My friends, keep GOING for Jesus.

It’s not by sight but by faith that we walk with Jesus.

You might not see results or expected results when you do things for Jesus, but have faith; when you go out in His power, in His Spirit and on His mission; He’s with you, He will accomplish and achieve His purpose. Jesus IS building His Church, so keep sowing the WORD in people’s hearts.

Have an awesome day with Jesus full of His Spirit.