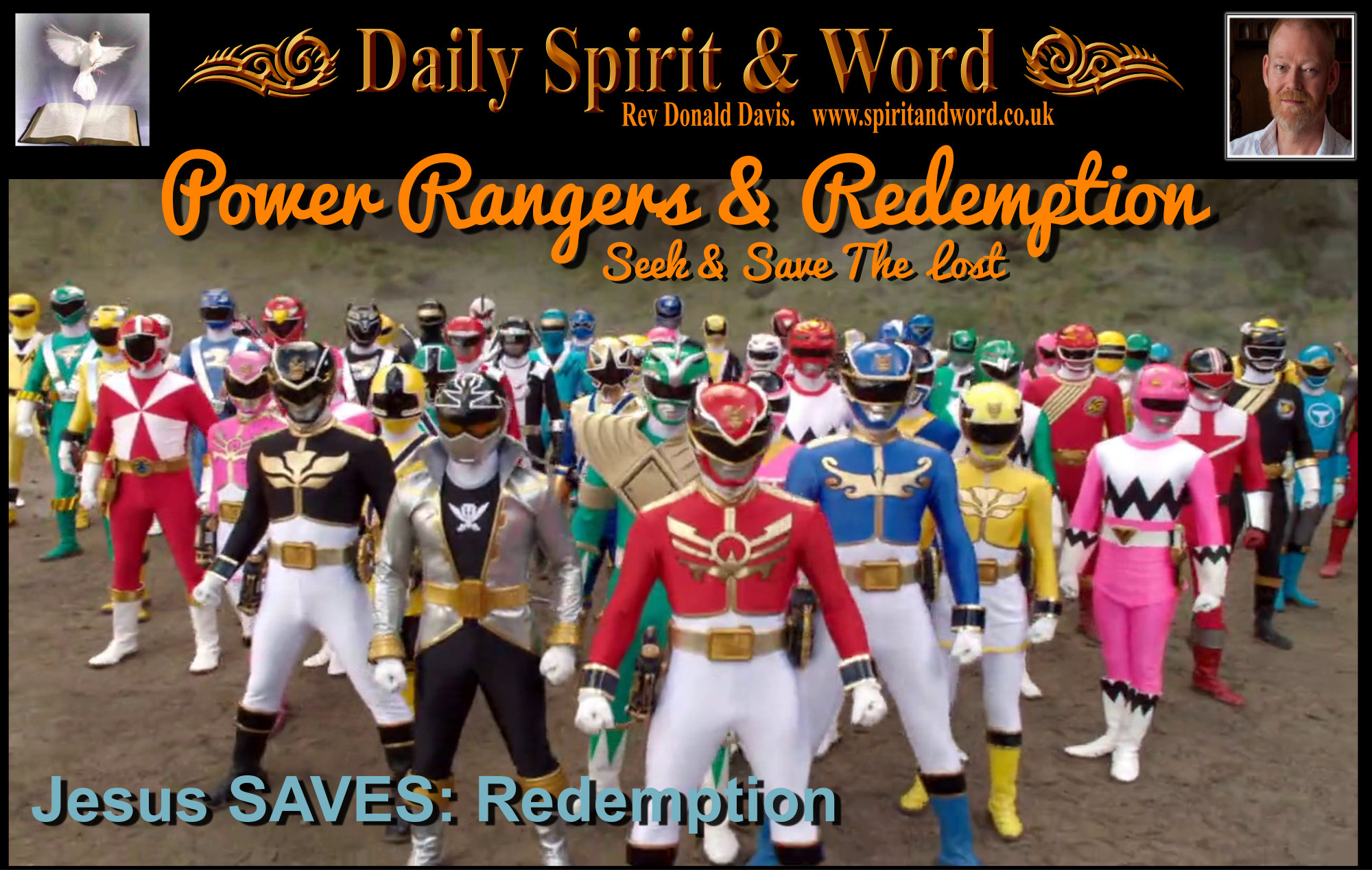 I had to look after my poorly granddaughter during the week and after dropping her sister Leila to school, Aminata turned on the TV at home and changed the channel to the Power Rangers: It was coming to the end of the show, and you’ll never guess the first sentence we heard: “You are not REDEEMED, because redemption is from within and you are not showing any signs of a change of character” Then they all got together and blasted the evil alien creature with a super-mega-blaster.

“Redemption is demonstrated by a change of character within.”

The Word ‘Redemption’ Is Awesome, because it’s pregnant with meaning and is about to be delivered.

1) What does REDEMPTION mean?

“God’s plans for the redemption of his world”

Biblically: Redemption Means: Jesus Christ came into this world to set mankind free from the slavery of sin, satan and self. He paid the price for mankind’s redemption. How much did redemption cost? It cost Jesus His life to set us free / redeem us from slavery. Why did it need to cost so much? Bible’s Answer: The wages (price) of sin is DEATH… Something had to die to set us free. Ezekiel 18:4 “For every living soul belongs to me, the father as well as the son—both alike belong to me. The soul who sins is the one who will die.” Ezekiel 18:20 “The person who sins is the one who will die…” Sin brings DEATH: So Jesus Christ came into this world to pay for the price of our sins. When we respond to God’s call to REPENT, when we Turn in REPENTANCE away from sin (again look at Ezekiel 18 for what true repentance looks like) AND put our trust in the death of Jesus Christ upon the Cross, then we will be set free; redeemed by the Lord. Without that repentance we cannot be saved. Unless you repent, you too will perish (Luke 13:3,5).

2) REDEMPTION IN THE BIBLE:

Answering the question; “Where do we see ‘redemption’ in the Bible?”

On the subject of redemption there are hundreds of related verses in the whole Bible so we’ll concentrate only on the New Testament’s treatment of the subject. Remember All Scripture (The whole Bible) is God breathed (God’s Word).

Verses from the New Testament: With or Related to REDEMPTION.
Mark 10:45
“For even the Son of Man did not come to be served, but to serve, and to give His life a ransom for many.”

just as the Son of Man did not come to be served, but to serve, and to give His life a ransom for many.”

While they were eating, Jesus took some bread, and after a blessing, He broke it and gave it to the disciples, and said, “Take, eat; this is My body.”

While they were eating, He took some bread, and after a blessing He broke it, and gave it to them, and said, “Take it; this is My body.”

And in the same way He took the cup after they had eaten, saying, “This cup which is poured out for you is the new covenant in My blood.

But by His doing you are in Christ Jesus, who became to us wisdom from God, and righteousness and sanctification, and redemption,

who gave Himself as a ransom for all, the testimony given at the proper time.

who gave Himself for us to redeem us from every lawless deed, and to purify for Himself a people for His own possession, zealous for good deeds.

Christ redeemed us from the curse of the Law, having become a curse for us–for it is written, “CURSED IS EVERYONE WHO HANGS ON A TREE”–

“Be on guard for yourselves and for all the flock, among which the Holy Spirit has made you overseers, to shepherd the church of God which He purchased with His own blood.

whom God displayed publicly as a propitiation in His blood through faith This was to demonstrate His righteousness, because in the forbearance of God He passed over the sins previously committed;

For you have been bought with a price: therefore glorify God in your body.

You were bought with a price; do not become slaves of men.

For I received from the Lord that which I also delivered to you, that the Lord Jesus in the night in which He was betrayed took bread;

knowing that you were not redeemed with perishable things like silver or gold from your futile way of life inherited from your forefathers,

and not through the blood of goats and calves, but through His own blood, He entered the holy place once for all, having obtained eternal redemption.

and from Jesus Christ, the faithful witness, the firstborn of the dead, and the ruler of the kings of the earth To Him who loves us and released us from our sins by His blood–

And they sang a new song, saying, “Worthy are You to take the book and to break its seals; for You were slain, and purchased for God with Your blood men from every tribe and tongue and people and nation.

For He rescued us from the domain of darkness, and transferred us to the kingdom of His beloved Son,

The Scripture, foreseeing that God would justify the Gentiles by faith, preached the gospel beforehand to Abraham, saying, “ALL THE NATIONS WILL BE BLESSED IN YOU.”

for all have sinned and fall short of the glory of God,

so that He might redeem those who were under the Law, that we might receive the adoption as sons.

in order that in Christ Jesus the blessing of Abraham might come to the Gentiles, so that we would receive the promise of the Spirit through faith.

For this reason He is the mediator of a new covenant, so that, since a death has taken place for the redemption of the transgressions that were committed under the first covenant, those who have been called may receive the promise of the eternal inheritance.

But when the fullness of the time came, God sent forth His Son, born of a woman, born under the Law,

Or do you not know that your body is a temple of the Holy Spirit who is in you, whom you have from God, and that you are not your own?

For He rescued us from the domain of darkness, and transferred us to the kingdom of His beloved Son,

how much more will the blood of Christ, who through the eternal Spirit offered Himself without blemish to God, cleanse your conscience from dead works to serve the living God?

And they sang a new song, saying, “Worthy are You to take the book and to break its seals; for You were slain, and purchased for God with Your blood men from every tribe and tongue and people and nation.

For the anxious longing of the creation waits eagerly for the revealing of the sons of God.

“But when these things begin to take place, straighten up and lift up your heads, because your redemption is drawing near.”

whom heaven must receive until the period of restoration of all things about which God spoke by the mouth of His holy prophets from ancient time.

who is given as a pledge of our inheritance, with a view to the redemption of God’s own possession, to the praise of His glory.

Do not grieve the Holy Spirit of God, by whom you were sealed for the day of redemption.

You are probably asking, “What’s all that got to do with The Power Rangers and Redemption?”

The cartoon series is about how a group of kids unite to fight against evil forces from space who’re attacking the earth. They are like a secret force. Nobody else on earth is aware that we’re under attack from these malevolent forces of evil, only the kids who’ve been given the knowledge and power to fight them.

We too have been given power and authority to take our stand against all the forces of wickedness and evil in the Heavenly realms by Jesus (Ephesians 5:1517. & Ephesians 6:10-20). We’ve been given the command to go and set all the people on earth free from the control and influence of these dark forces. The people of the earth have been blinded by the evil forces, they are unaware of their spiritual condition (2 Corinthians 4:3-5). We demonstrate that we’ve been redeemed, set free from those forces by our own changed character and the power of Heaven within us and a desire to help those who’re still in bondage.

My friends you’ve been REDEEMED. You are God’s POWER Rangers. You’ve been set free, purchased, redeemed in order that you might save the people of the earth.