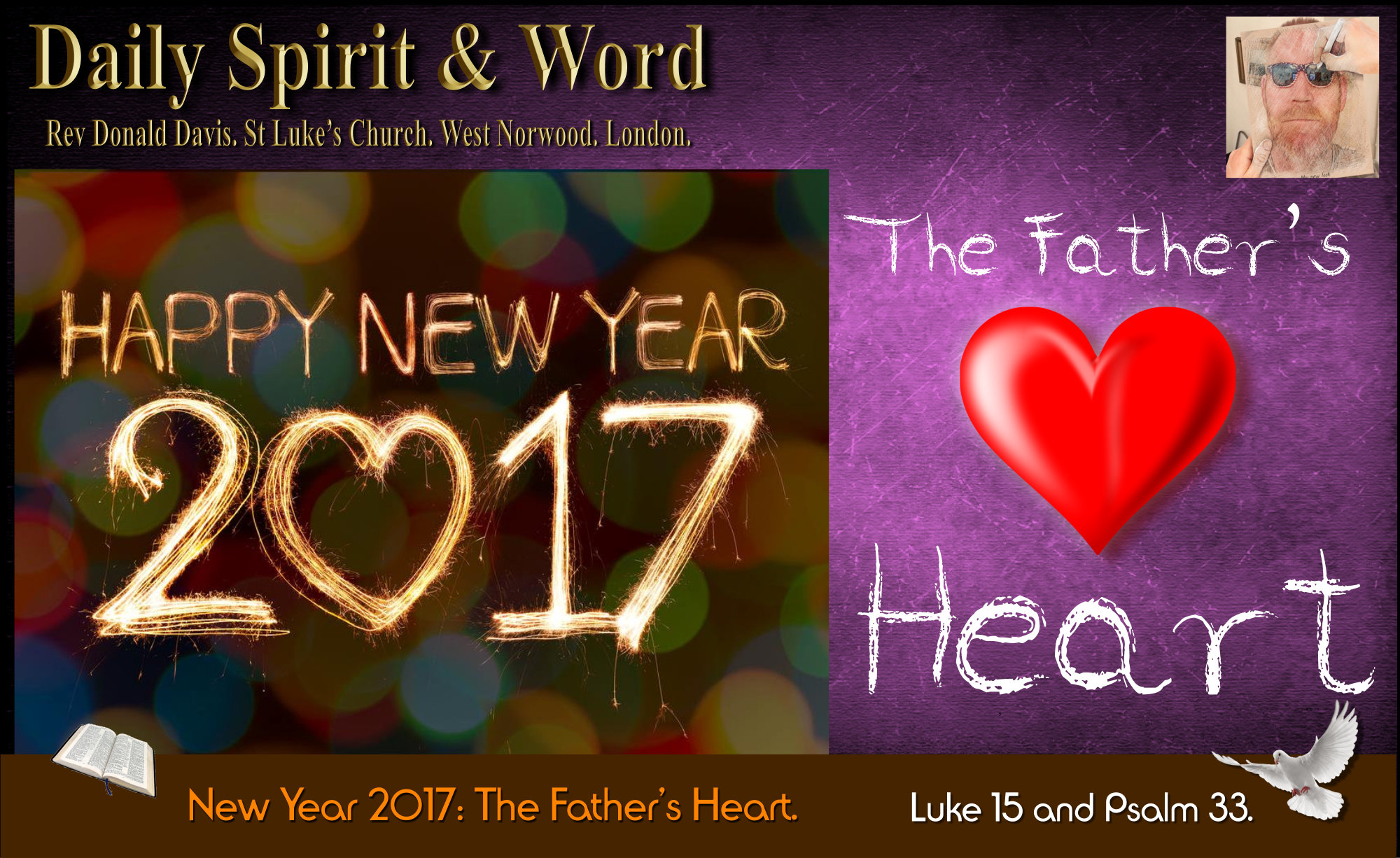 Getting The Father’s Heart For the New Year.

Psalm 33:11 (NIV)  But the plans of the LORD stand firm for ever, the purposes of his heart through all generations.

Over the Christmas season the TV is quite good, because they show all the old family favourite films. It struck me that the films that seem to stand the test of time are not the ones with fancy graphics or awesome animation, nor is it fast moving scenes, car pile-ups or big explosions, etc, but it is the ones that have really great stories and characters that are convincing.

One such film, I watched again for the umpteenth time was; Jesus of Nazareth. In an early scene Peter was complaining about having to pay taxes to the Romans even after being out fishing all night and having caught nothing, when he got into port he wasn’t convinced that Jesus was the Messiah who could set them free from Roman domination. It showed a reluctant Peter, when asked by Jesus to go out fishing after they’d been fishing all night long, so the other Disciples had to coax him into accepting Jesus into his boat. I’d never noticed before that when Jesus told the story of the prodigal son, he did so in a house full of obvious sinners, Matthew the Tax Collector and Publicans and in the film the story was targeted at a reluctant Peter who was standing outside the door of the house listening. The film portrayed Peter as a belligerent and reluctant Disciple of Jesus, who was being judgemental about Matthew who collected taxes for the Romans.

I’m not convinced that part of the film is authentic, however it did get me thinking about Jesus telling of that story. Who was he targeting? Then I thought to myself, that story applies to every single one of us, so it would also have applied to both Jesus’ Disciples and His opponents, the Pharisees and the Sadducees.

The Prodigal Son: The Lost Son / The Loving Father / The Resentful Older Brother.

The Prodigal Son: Who demanded his inheritance before his father had even passed away. Who wasted his inheritance in wild, sensual and sinful living. Who was far away from home and in a desperate state. Who decided to repent and return home again, begging for mercy and forgiveness. Who among us has not been like that Prodigal Son? We’ve all gone away from God on purpose at some point in our lives, choosing to go with our desires, or our feelings instead of God’s way.

The Father’s Response: To run out and greet his wayward son, embrace him, cloth him, bring him home and throw a big party. Every time I hear that story of the Father’s loving heart it brings home to me just how much God really does LOVE everyone, and is just waiting for us all to come back home again to Him.

The Elder Brother: Who was judgemental, outside, refusing to come in, hurt and offended at the Father’s grace, kindness and mercy towards his wayward brother. Refusing to be consoled. (That’s who Peter was in the film), but who among us has not acted like that elder brother? We’ve probably all thought at one point or another, “He doesn’t deserve God’s grace and mercy after what he’s been up to”. However, when we bring it home, back to ourselves, we don’t deserve God’s forgiveness, love and kindness either, it’s all because of His GRACE that we are saved. The fact is God really does LOVE everybody and wants everyone to come to REPENTANCE.

Which one of these characters do you see yourself as being in that story? The wayward son, the merciful, kind and loving father or the elder brother standing outside refusing to join in the celebrations?

God is the same, the Bible tells us, yesterday, today and forever.

However, if in reading through this little piece, you’ve been pricked in your conscience in some way, then don’t despair of yourself, just get right with your Heavenly Father, do it right now, don’t delay, confess your sins to God and He will forgive you. He will wash you clean and give you a brand new start for the New Year 2017.

I’m praying for all my friends, to be closer to the Lord Jesus in 2017 than they’ve ever been before. Amen!

Here’s hoping you have awesome success in 2017: May you be overflowing with Holy Spirit power to be:

Who among us doesn’t need more of this kind of fruit in our lives in 2017?

I do!
I want it!
I’m praying to Jesus for it.
Praise the LORD!
Don.

NOTES: The story that Jesus told about the Prodigal Son was part of a bigger story in Luke 15:

Which is most precious to us?

Which is most precious to God?

The people the story is TARGETED at in the Bible are: The Pharisees and the religious teachers of Israel in Jesus time. They would all celebrate a lost sheep being returned to its owner. They would all value a lost coin, even though it was one of ten, but they kept themselves away from lost SINNERS and shunned those, who in their eyes, were completely lost already.

We can all imagine how hard it would be to loose a sheep, even though it’s one in a hundred.

We can all imagine how precious those coins must have been, even though there was another nine to console.

However, imagine having just two sons and loosing one of them, how devastating for any father is that? But when he returns, OH THE JOY… That’s the Father’s Heart.

The Pharisees, much like people in our own time, are MATERIALISTIC: They valued sheep and coins, but thought very little about the value of human life. Especially people who didn’t fit into their moral code of conduct.

The two sons are both Materialistic: The lost son is evidently wayward, but he repents and is restored and celebrated.

However, the materialism in the older son and his resentful attitude only become evident when the LOST son is welcomed back with open arms. He wants a PARTY with his friends. He was thinking about what his brother had wasted (part of his own inheritance)… He refused to coming in and join the celebration.

The Bible makes it clear, the Pharisees and we should have the SAME kind of heart as the Father in the story that Jesus told.

But the thing that jumps out at me afresh today is GETTING the FATHER’S HEART: Jesus wants is all to know what’s going on in HEAVEN: Their is rejoicing and celebration going on in God’s House when just one of us, truly comes to our senses and surrenders our lives to God through His Son Jesus.

Psalm 33:11 (NIV)  But the plans of the LORD stand firm for ever, the purposes of his heart through all generations.

Let’s get the FATHER’S HEART today: Pray for yourself in 2017, that you’ll be filled with the same kind of compassion that Jesus has for those who are far away from God, lost.

Be obedient to the Father’s Heart: Go out and seek and save the LOST: That’s Why Jesus came: To SAVE SINNERS. He’s commissioned every single Christian to be involved in this, the greatest calling, to join Him in SAVING SINNERS. The Holy Spirit is drawing them to Jesus, all we have to do is PRAY and SHARE the Good News. Because FAITH comes by hearing the Good News of Jesus Christ.

Now, we’d all love our churches to be filled afresh with LOST SINNERS wouldn’t we?

Let’s get busy in 2017 saving as many as we can. Hopefully we’ll see a HARVEST of Souls this coming year. Amen!