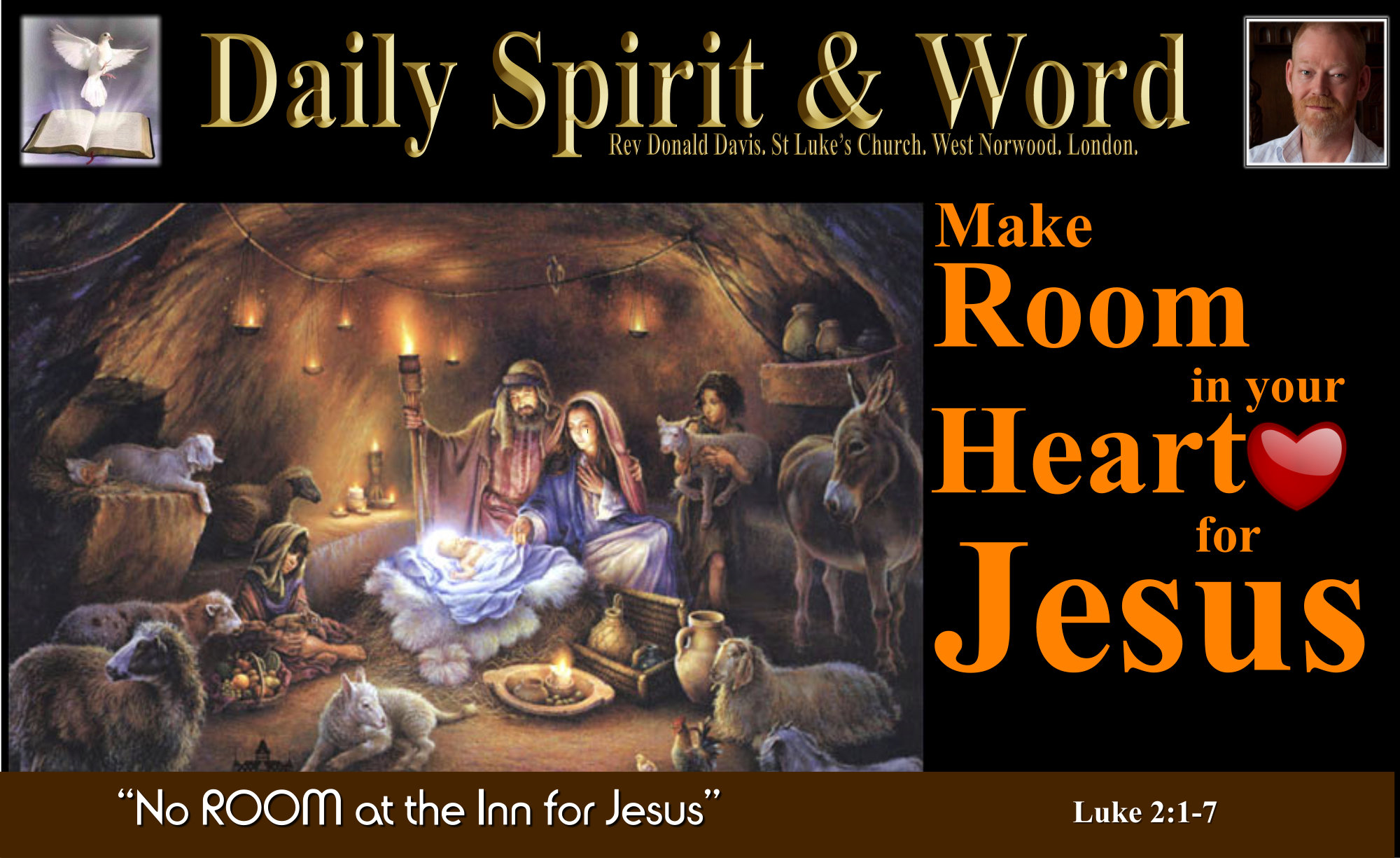 No Room For Jesus At Christmas.

Good morning my friends, it’s often astounding to me that the Lord Jesus was born in a stable and put into an animal feeding trough, because there was no room for his poor mummy and daddy at the Inn. Don’t you think this is strange? Surely common decency would dictate that the Proprietor of the Inn would ask one of the other guests to vacate a room so that a pregnant woman could have a place to give birth to a child, but NO! There was no room for Jesus at the Inn in Bethlehem. I wonder what business was like for that Innkeeper after Jesus was Crucified?

Luke 2:1-7 (ANIV)
1 In those days Caesar Augustus issued a decree that a census should be taken of the entire Roman world.
2  (This was the first census that took place while Quirinius was governor of Syria.)
3  And everyone went to his own town to register.
4  So Joseph also went up from the town of Nazareth in Galilee to Judea, to Bethlehem the town of David, because he belonged to the house and line of David.
5  He went there to register with Mary, who was pledged to be married to him and was expecting a child.
6  While they were there, the time came for the baby to be born,
7  and she gave birth to her firstborn, a son. She wrapped him in cloths and placed him in a manger, because there was no room for them in the inn.

No ROOM For Jesus:

Mary and Joseph were in Bethlehem because that was their ancestral home town. They had travelled a great distance, and perhaps it was that tiresome journey that brought on the birth of Jesus, we don’t know. However, we are told that whilst they were there, the time came for the baby to be born, but they were in a stable. It was not uncommon for people in those days to live with their animals. It was also expected that people would offer hospitality to strangers. Imagine though, Jesus came down from Heaven into the body of a human baby and the first things that He experiences are the sights, sounds and smells of a stable. He’d just been in HEAVEN; the next moment, in a stinky stable. There was no room for Him in the nice place.

HOW IS THERE NO ROOM FOR JESUS.

We’ve just heard through two Christian Campaign Groups: The Christian Institute and Christian Concern: That there is a movement within the UK to de-Christianise or separate even further the Christian influence upon public life in the UK. (Click here to hear Andrea’s response on the BBC to this recent Commission on the impact or religion and belief on public life in the UK) Their argument in favour of this is that Christians make up only a small fraction of the populace and in recent surveys over 53% of people in the UK say they have NO FAITH.

Of course this is NOT NEWS, it’s no surprise, and is even predicted in God’s Word that this world will have even less room for Jesus just before He comes back to judge the world.

It’s no surprise, because every Christian is aware that our Nation and the world is getting farther and farther away from God. We’re far away from God’s standards of morality revealed in the Bible.

There are also things that put people off or harden people’s hearts against RELIGION: The religious wars and religious extremism, the rise of violent terrorist organisations that use the Islamic faith as a basis for their actions. Because of that, people are perhaps justified in their thinking that ‘religion’ only leads to conflict. So it’s not surprising that there is a backlash against other main-stream religions, once ‘religion’ is used to justify murder, they’ll automatically lump every religion into the same basket.

Some people are not comfortable with the word “Christmas” so it’s being replaced with other terms: Xmas, Winter Holiday, Season of Goodwill, etc… The Whitehouse in America has called it “Winter Holiday” for the first time this year.

There is NO ROOM in this world for Jesus.

Is there room in your heart for Jesus this year?

THERE NEVER WAS ROOM FOR JESUS

John 3:19-20 Jesus is The Light: Men LOVED the Darkness.
19  This is the verdict: Light has come into the world, but men loved darkness instead of light because their deeds were evil. 20  Everyone who does evil hates the light, and will not come into the light for fear that his deeds will be exposed.

The real reason there is NO ROOM for Jesus is because people love the darkness (the darkness of sin).

The Bible tells us that Jesus had nowhere to lay his head. Even whilst Jesus was alive as a man, he had nowhere to call home here on Earth. This place, of course, was not His home, His home has always been HEAVEN: It always was, always has been and always will be Jesus home. When Jesus came to Earth, He was only visiting; but there was no room on the Earth for Jesus, even whilst He was alive down here with mankind. Jesus only ever did GOOD, but there was still no room for Him.

Is there room in your heart for Jesus Christ?

Why Should We Have Made Room For Jesus?

Jesus is the CREATOR of the Universe: John 1:1-14. Because He Created it, it all belongs to HIM, so when He came to visit, don’t you think mankind should have made a very special room for Him? But no, Jesus was laid in a feeding trough, a manger. A stable and the smell of animals was the place of the Creator’s birth. When in actual fact the best PALACE on Earth wouldn’t have been a fitting place for the Creator. Even Buckingham Palace would seem like a shed to the KING of Kings.

Why Should WE Make Room For Jesus Today?

He’ll judge us on that basis because He’s revealed it to everyone: It’s our Conscience that screams “Don’t Do IT” when we’re tempted to; tell lies, steal, covet (have an inordinate desire for things), disobey, dishonour and disrespect our parents, misuse God’s Holy Names (Blasphemy), put other things first instead of God, and worship our own man-made gods (idolatry), false religion, false beliefs, man-made ideas about God. Your Conscience it telling you “Don’t Do It”, but we ignore our God given conscience. When we sin, we do so with knowledge and it’s upon that basis that Jesus will judge mankind. He’ll judge me and He’ll judge you.

We should make room for Jesus Christ today, because He’s coming back soon as Judge

Have you got room in your heart for Jesus today?

ONE MORE REASON TO MAKE ROOM FOR JESUS: LOVE.

We should make room in our heart for Jesus, because He’s demonstrated His LOVE for us.

The Bible says, “Whilst we were still sinners, Christ died for us”…

Romans 5:7-9 God LOVES You!
7  Very rarely will anyone die for a righteous man, though for a good man someone might possibly dare to die.
8  But God demonstrates his own love for us in this: While we were still sinners, Christ died for us.
9  Since we have now been justified by his blood, how much more shall we be saved from God’s wrath through him!

Everybody has sinned and fallen short of God’s Holy Standard (Romans 3:23), but God so loved the world (You and me) John 3:16, that He sent Jesus, even though the world had no room for Him, to SAVE mankind on that Day of Judgement.

If you make ROOM in your life for Jesus today, if you will turn from sin, if you will repent and trust in Him alone, then you pass through on that Day of Judgement.  He’ll forgive you today if you make room in your heart for Him.

Today is the DAY OF SALVATION.

Today is the DAY TO MAKE ROOM FOR JESUS.

My friends, this Christmas, make certain that there IS room in your heart for Jesus.