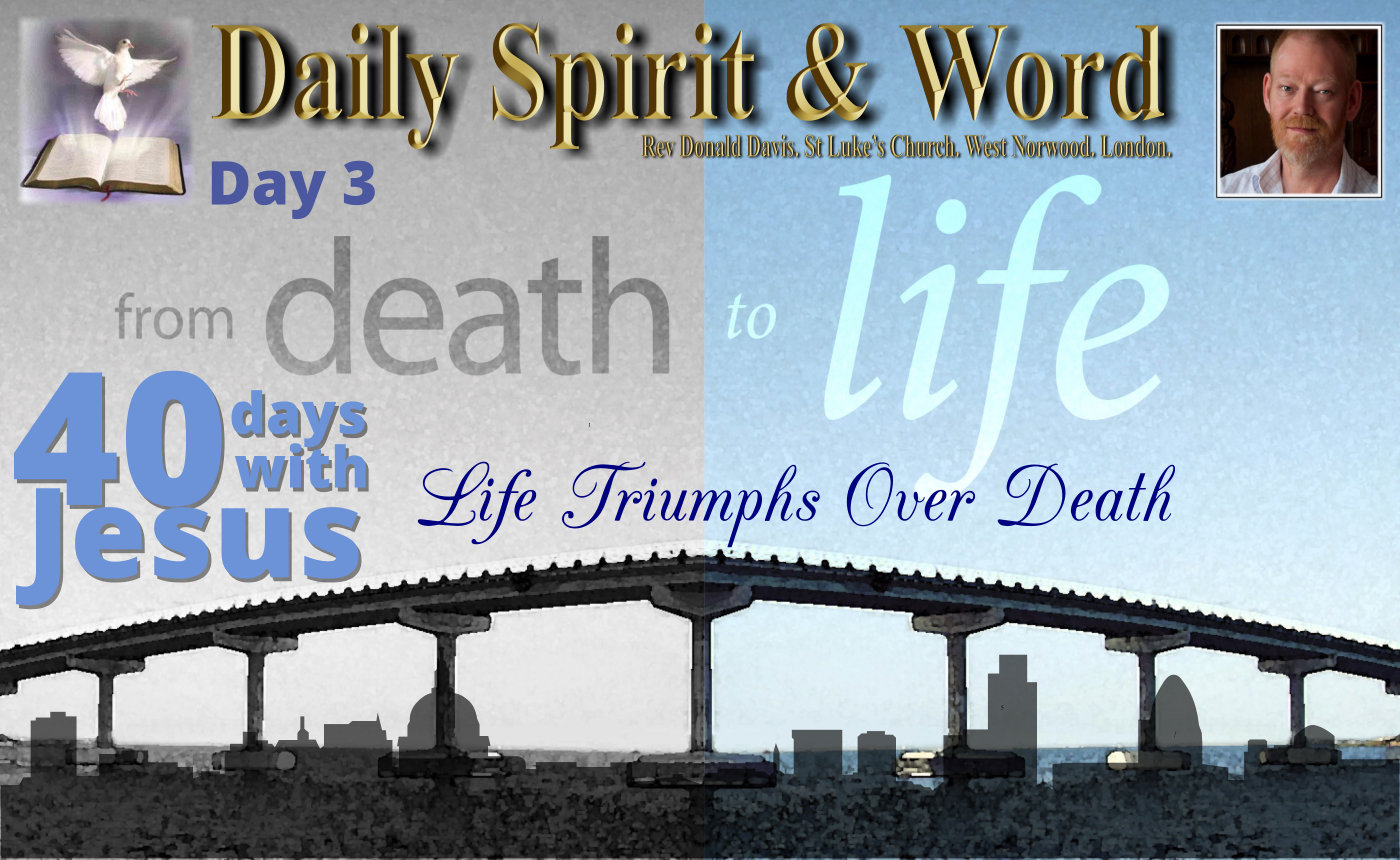 Good morning my friends, I’ve just come back into the study after being out in the garden for prayer. As I reflected upon last night’s Street Evangelism and the people we met and had discussions with, I’m filled with excitement, expectation and wonder. We talked before going out about the meaning of being ‘Born Again’. We had a little tract to give to people and though it’s a phrase many Christians use every day, it’s my experience of regular ministry that most don’t know what it actually means or how a person gets born again. All they know is that it’s an imperative, that unless a person IS born again, they cannot enter into the Kingdom of Heaven. It was good preparation, because the conversations we had with people enabled us to engage them on a Spiritual level rather than merely focusing upon reason or argument. The best conversation I had last night was with a dedicated / devoted young Muslim man. We got chatting about the real meaning of Easter and Eternal Life and after inquiring, he explained the Muslim’s hope for Heaven. We gently shared that we believe that Jesus is God and that we who believe and trust in His death upon the Cross can gain assurance that we have a place in Heaven from the moment we trust in Him.

When we think about Mary Magdalene’s first encounter with Jesus and the first two disciples; Peter and John, we’re going to see some of humanity’s greatest fears blown out of the water. Sorry, that’s the Submariner in me speaking again 🙂 But one of the greatest fears human beings have is that DEATH is approaching and though we try to avoid it as best we can, there’s really not a lot we can do about it, because history proves that TEN out of TEN people will actually die, for those that know what that means, it’s a 100% success rate for DEATH.

If we’re not snatched away into eternity in our infancy, youth or young adult life, then from the age of about 45-50 we’re on the downward slope heading for certain death. Throughout history, in every generation, people have tried various ways to avoid the inevitable. Some have even tried to ensure that they have a good afterlife, like the ancient Egyptians and south Americans who mummified their corpses and provided material wealth and everything someone might need on the others side of life. No matter how hard we try, even with the best anti-aging treatments available, we eventually are hit with the reality we’re all going to die.

The great news for those who believe in Jesus Christ is that we have a hope of being resurrected too. Jesus Christ overcame DEATH and came back to life after dying. However, many argue against Christianity on that basis, “Christians a just living in delusion and vainly hope for something that’s impossible”. But as you look at the historical evidence within the texts of the Bible and some manuscripts from non-believers at the time, you’ll discover that it’s based upon certain facts. The historicity of the resurrection is beyond question the most attested fact in the history of the human race. John devotes two whole chapters to the fact of the resurrection after the crucifixion and death of Jesus Christ. So my friends, our faith is not based upon wishful thinking or vain hopes for something that might never happen. It’s a sure and certain HOPE, because it’s already happened once, Jesus did rise and the evidence of those who met the risen Lord Jesus shout out the reality. Not only that, but millions of Christians all over the world will tell you today, “I KNOW Jesus”. We don’t just know about Jesus, we actually know Him from experience of walking, talking and being with Jesus every single day. We can’t see Him today physically, because He’s in Heaven, but we can know Him by Holy Spirit who’s within everyone who’s trusted in Jesus and His death upon the cross to wash us clean from our sins.

The Resurrection Was A Surprise

The Followers of Jesus DIDN’T expect Him to rise from the dead. That’s something we can see very clearly from John 20:2-9.

John 20:2-9 (NIV)
2  So she came running to Simon Peter and the other disciple, the one Jesus loved, and said, “They have taken the Lord out of the tomb, and we don’t know where they have put him!” 3  So Peter and the other disciple started for the tomb. 4  Both were running, but the other disciple outran Peter and reached the tomb first. 5  He bent over and looked in at the strips of linen lying there but did not go in. 6  Then Simon Peter, who was behind him, arrived and went into the tomb. He saw the strips of linen lying there, 7  as well as the burial cloth that had been around Jesus’ head. The cloth was folded up by itself, separate from the linen. 8  Finally the other disciple, who had reached the tomb first, also went inside. He saw and believed. 9  (They still did not understand from Scripture that Jesus had to rise from the dead.)

Mary was on the way to the tomb not to see Jesus but to perform his funeral rites and anoint his dead body. The Disciples didn’t expect Jesus to be alive either, they didn’t understand. So if the RESURRECTION was a hoax or trick, they’d surely have included the certainty that they expected Jesus to rise from death. That’s what I love about the Bible, it doesn’t hide the fact that those we hold up as pillars of the faith today, didn’t KNOW or UNDERSTAND Jesus message or mission even though they’d been with Him for over three years and witnessed his miracles and teachings. This for me is one of the greatest pointers to the authenticity of the Gospel accounts.

Peter an John didn’t hang around to find Jesus, they simply returned home. It was only Mary Magdalene who lingered and looked, perhaps that’s why she was the first to experience and see the resurrected Lord.

John’s Gospel is filled with contrasting elements; yesterday we looked at Light and Darkness, today we’re touching upon another greath theme that runs through and is weaved into almost every page of his Gospel account; Life Overcome Death. The Gospel begins with statements about Jesus being the source of LIFE and that He is in fact LIFE.

John 1:1-5
1  In the beginning was the Word, and the Word was with God, and the Word was God.
2  He was with God in the beginning.
3  Through him all things were made; without him nothing was made that has been made.
4  In him was life, and that life was the light of men.
5  The light shines in the darkness, but the darkness has not understood it.

Then John goes on to tell us about the New Life that we can all have by receiving Jesus Christ as Lord. In many places you’ll see LIFE juxtaposed with DEATH. John 3:16-21. Tells us how we can know that we’ve passed from DEATH to LIFE. There are many incidents that John records where people in conversation with Jesus are given the revelation of LIFE and it’s fullness in Him John 4, John 6, John 10 and John 14. It’s full of LIFE and DEATH, but more importantly how believing and trusting in Jesus we can have both; fullness of life and eternal life in Him.

The Witness Of The Grave-Clothes.

The second fact of the resurrection’s historicity you’ll notice in John 20:2-9 above, is the presence of the grave-clothes. If Jesus body had been stolen or smuggled away as some suggest, then surely they’d have taken the most valuable things as well. Cloth was not cheap in those days, it was a luxury item and it would have been taken too. But the grave clothes were in place, Jesus body was not unwrapped like Lazarus’ was (John 11:44), but his resurrected body emerged out of the cloths without disturbing them. The head-covering was neatly folded.

The Tomb of Jesus

The third fact of the authenticity of the resurrection is that the followers of Jesus didn’t venerate his tomb like those of other religions do today. That’s because Jesus didn’t stay in the tomb, he’s alive, He’s not there anymore, His Holy Body is gone and is ALIVE today in Heaven. There’s no body here on earth for us to find or worship or venerate. We serve a living Saviour.

Points to Ponder Day 3 of 40 Days With Jesus:

Dear Lord Jesus, I thank you that You have provided such convincing proofs of Your resurrection. I’m rejoicing now that You didn’t stay in the tomb, but rose from the dead. I’m inviting You Lord Jesus to make Yourself known to me today. Oh Lord, grant me a spirit of wisdom and revelation that I might have a deeper and more lasting conviction of the historical reality of Your resurrection and how You have shown us that Your Life has Triumphed OVER Death, And that Life Overcomes Death. Amen.

Praying for all my friends who follow Daily Spirit & Word today. It’s been difficult to TAG people on Facebook, because when I try it locks me out and I have to enter a new password, they keep reporting my page has been hacked, but I know it hasn’t as it keeps a rocord of login attempts. So I’ll just have to rely upon people’s LIKES and SHARES  😎