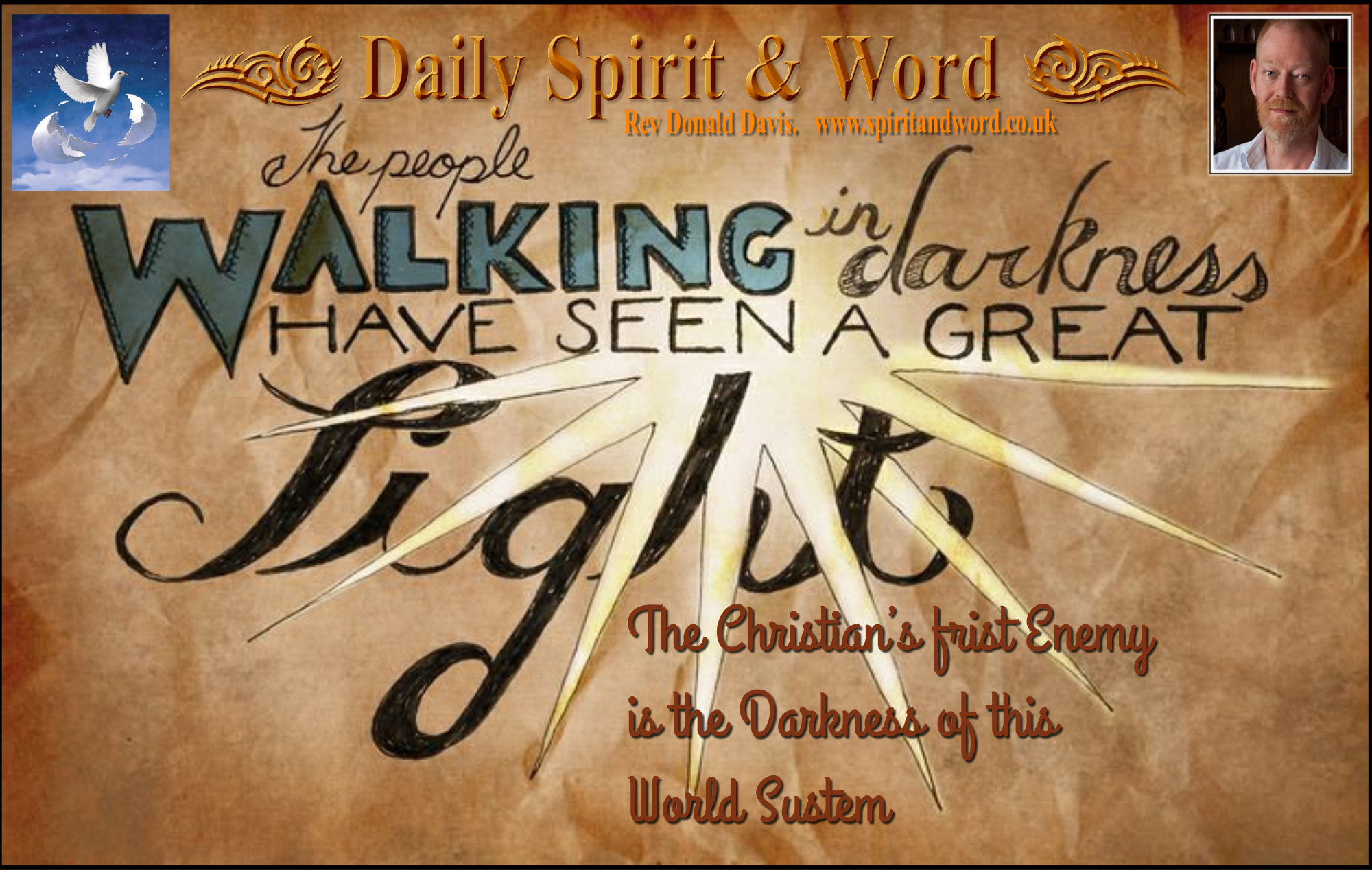 Good morning my friends, it’s amazing but true that when you begin following the Prince of Peace, the Lord Jesus Christ, you come under attack from His ememies. Who would want to be an ‘enemy’ of the Lord Jesus? And why would anyone or anything want to take a stand against someone soooo loving, soooo kind, soooo gentle?

Well the truth is as a follower of Jesus Christ you have entered a Battlefield.

On a Battlefield, the missiles are exploding, guns are blazing, bombs are falling and booming, and casualties are mounting. Our first and natural inclination is to get off the Battlefield and save ourselves, but as a Christian you can’t.

As the wisest of Generals know, we should never underestimate our Enemies, but we need to know something from the off: Jesus is the WINNER of this Battle, but the Enemies will just not accept it yet. Satan has been defeated, when Jesus died upon the Cross, rose again from the Dead and Ascended into Heaven: So Satan now runs around like a wounded lion, but as you know a wounded lion is sometimes more dangerous and desperate than an uninjured lion.

Followers of Jesus need to know their Enemies: It’s been said that we have THREE major enemies: The World, The Flesh and The Devil.

Lets take them in turn over three studies:

Your First Enemy: “The WORLD”.

You might object about that, as I did, because isn’t the World that God made a beautiful and stunning place? I do love this amazing and awesome world and all that God has provided for our enjoyment. However, there is something that not quite ‘right’ with God’s Created World: Part of the Created World is Polluted: I’m not talking about Carbon emissions or global warming or nuclear waste though, but the pollution is; rebellion, rejection of God as King.

It’s that polluted part of God’s Good Creation that is in Rebellion against Him: That World System that loves the Darkness and Hates the Light:

John 3:18-21  “Whoever believes in him is not condemned, but whoever does not believe stands condemned already because he has not believed in the name of God’s one and only Son.
19  This is the verdict: Light has come into the world, but men loved darkness instead of light because their deeds were evil. 20  Everyone who does evil hates the light, and will not come into the light for fear that his deeds will be exposed. 21  But whoever lives by the truth comes into the light, so that it may be seen plainly that what he has done has been done through God.”

Everyone: Who does EVIL hates the Light (Jesus).

The World System that hates Jesus is “EVERYONE” who does EVIL.

You might say, well I’m not ‘EVIL’: Simply put, ‘evil’ is rejection of God and all that’s good. We do ‘evil’ when we; lie, steal, cheat, lust, disobey our parents, covet (inordinate desire of things of this world) and blaspheme God (by using God’s name or Jesus Christ as a swear word). Now we know what the Evil World is: But there’s more….

However, we don’t really know the full effects of the sinful decisions that Adam and Eve made in the Garden of Eden and how that decision has infected every human soul since. We’re born into that same kind rebellion, we’re born on the opposite side, we’re born opposing Jesus, we’re born an enemy of the LIGHT.

Whenever anyone comes into the Light it’s as if they are like those who escaped from Communism during the Cold War: They had to sneak out of Russia or those Eastern Block countries that were part of the Russian Federation. The were called “Defectors“: When you come over to Jesus camp, when you come across over to the side of light, you are defecting against the rule and reign of Satan and the world system under his authority.

Evil is what we are when we are born: Because we’re born into sinful rebellion against the Creator and His wishes. We’re in the camp of the enemy until we defect (Repent and Trust in Jesus side).

Just as the Russians viewed Defectors as Enemies of the State: So Satan and his world system views everyone who comes over to the side of Jesus as Enemies: So your first enemy is the World (Governed by it’s Ruller: Satan). It’s the Evil World System, but not the world that God Created Good. (Hope you can now see how the world is polluted?).

We know what living in rebellion against God is like, if we’ve traveled from the Darkness into the Light: We must have come through the darkness ourselves, we must have passed over into the light or we would not be Christians, we would not be followers of Jesus yet.

From DARKNESS to LIGHT: From Satan’s Evil World Order to the Rule and Reign of King Jesus.

Isaiah 9:2  “The people walking in darkness have seen a great light; on those living in the land of the shadow of death a light has dawned. “

Remedy: The Soul that Seeks The Light:

“The People Walking In Darkness Have Seen A Great Light”

It’s like there’s light, hope, joy, love, peace at the end of a long-dark-tunnel.

Those Defecting from Russia were escaping a cruel and hard Dictatorial Communist regime and crossing over to freedom in the free Western world governed by Human rights ruled by Democracy.

A Christian is Defecting: A world system ruled by Satan, who wants to enslave people and keep them in bondage. He wants to blind people so that they cannot see the light. He wants to keep people in Darkness and ignorance of their true condition.

In John’s Gospel we get a clear indication of How we can know the difference between the Kingdoms of Light and Darkness:

John 1:1-13
1  In the beginning was the Word, and the Word was with God, and the Word was God. (Jesus is God).
2  He was with God in the beginning. (Jesus is the Eternal God).
3  Through him all things were made; without him nothing was made that has been made. (Jesus is the Creator).
4  In him was life, and that life was the light of men. (Jesus GIVES life to everyone).
5  The light shines in the darkness, but the darkness has not understood it. (Jesus came into the world).
6  There came a man who was sent from God; his name was John. (John the Baptist).
7  He came as a witness to testify concerning that light, so that through him all men might believe.
8  He himself was not the light; he came only as a witness to the light.
9  The true light that gives light to every man was coming into the world.
10  He was in the world, and though the world was made through him, the world did not recognise him.
11  He came to that which was his own (the Jewish People), but his own did not receive him.
12  Yet to all who received him, to those who believed in his name, he gave the right to become children of God— (Every Christian who comes over into Jesus side in this battle becomes a child of God).
13  children born not of natural descent, nor of human decision or a husband’s will, but born of God. (The Holy Spirit of God brings about the new birth, you are born-again into God’s Eternal Family when you trust in Jesus Christ for Salvation or when you defect out of Satan’s World System).

The DARK Night Of The Soul: In this amazing and difficult book, John of the Cross reveals the dilemma for mankind; crossing over from Darkness into the Light: He calls it’

“Dark Night Of The Soul:”  goes on to say; “We may say that there are three reasons for which this journey made by the soul to union with God is called night. The first has to do with the point from which the soul goes forth, for it has gradually to deprive itself of desire for all the worldly things which it possessed, by denying them to itself; the which denial and deprivation are, as it were, night to all the senses of man. The second reason has to do with the mean, or the road along which the soul must travel to this union — that is, faith, which is likewise as dark as night to the understanding. The third has to do with the point to which it travels — namely, God, Who, equally, is dark night to the soul in this life. These three nights must pass through the soul — or, rather, the soul must pass through them — in order that it may come to Divine union with God.

Worldly Things: Love for the world and it’s pleasures, the sensual world, the rebellious world.

God: We’re not born knowing God, we know that He exists, but we don’t know Him personally, we’re born estranged from God, we’re born in Darkness needing the light of faith and Jesus before we can ever see the light and cross over from the Darkness of this world into His Kingdom of light.

Escape: The Bible tells us the Christian has escaped the ‘corruption of the world’.

2 Peter 1:3-4 “His divine power has given us everything we need for life and godliness through our knowledge of him who called us by his own glory and goodness. 4  Through these he has given us his very great and precious promises, so that through them you may participate in the divine nature and escape the corruption in the world caused by evil desires.“

So we need to say, “Goodbye” to the World System and it’s Ruler.

The first enemy is the World for the Christian, the next Enemy is our own flesh and our arch-enemy is Satan.

PRAYER: Oh Lord Jesus Christ, we’ve seen today just how important it is to know about our enemies. Today we’ve thought about the fact that when we are born, we’re born into a world system that is in rebellion against You. Lord Jesus, since I’ve come over to Your side by believing and trusting in You as my Lord (KING) and Master, please help me to live in this world, knowing that I’m part of a different Kingdom, that I am Your Ambassador Lord, please help me to represent You with love, gentleness, faithfulness and honour today. Please keep me from loving this world so much that I’m falling away from You. I don’t want to have an inordinate affection for this world Lord, so help me to LOVE YOU with all my heart, mind, soul and strength. Thank You Lord for setting me free from the World and letting me see the awesome light of Your Kingdom. Amen.

Have an Awesome Saturday in the Kingdom of the KING of Kings my friends.

One Reply to “Knowing Your Enemies: The World.”