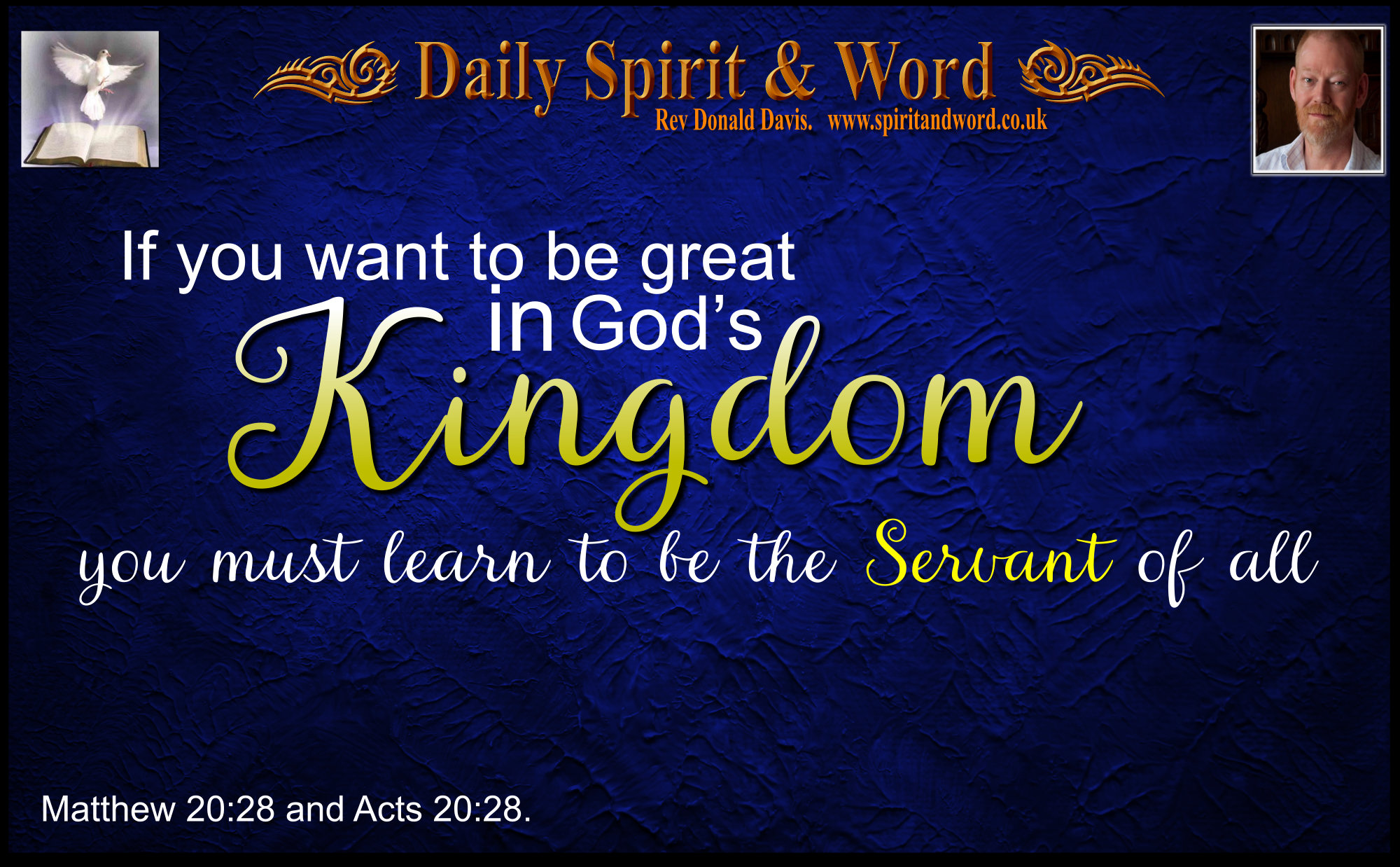 We all want to be significant in the eyes of others and competition for recognition is nothing new, even amongst the followers of Jesus Christ, there were those who, before they were born of the Spirit, didn’t quite grasp the true nature of the Kingdom of God. It’s almost amusing that Jesus confounds the wisdom of this world by turning what it values most upon it’s head and saying this is now much better.

It’s like a fashion expert telling us that white is the new black 🙂 Or red is the new green.

Jesus said, that to be GREAT in God’s Kingdom, you must become the servant of ALL (of everyone).

Normally, when you think of great people, you think how they are served by a host of servants; they’ll be driven places by a Chauffeur, they’ll be welcomed into their home by a Butler or House Manager. They’ll have a bath run for them by a personal servant, they’ll even have their back scrubbed by another servant. The cook will prepare meals for them, the gardener will look after flowers and the grounds. Personal assistants will ensure you never need to go into shops again. Wherever you go people bow down before you and sometimes tremble in your presence, because of your majestic greatness.

Now imagine, being with Jesus and recognising His GREATNESS, then asking if you can be one of His special people, his right-hand-man. Well that’s what the mother of two of Jesus Disciple wanted for her sons. It’s obvious they wanted it too as you’ll see from the passage below;

Matthew 20:20-28 Then the mother of Zebedee’s sons came to Jesus with her sons and, kneeling down, asked a favour of him. 21  “What is it you want?” he asked. She said, “Grant that one of these two sons of mine may sit at your right and the other at your left in your kingdom.” 22  “You don’t know what you are asking,” Jesus said to them. “Can you drink the cup I am going to drink?” “We can,” they answered. 23  Jesus said to them, “You will indeed drink from my cup, but to sit at my right or left is not for me to grant. These places belong to those for whom they have been prepared by my Father.” 24  When the ten heard about this, they were indignant with the two brothers. 25  Jesus called them together and said, “You know that the rulers of the Gentiles lord it over them, and their high officials exercise authority over them. 26  Not so with you. Instead, whoever wants to become great among you must be your servant, 27  and whoever wants to be first must be your slave— 28  just as the Son of Man did not come to be served, but to serve, and to give his life as a ransom for many.”

Here we see three people seeking greatness in the eyes of others: A mother and her two sons. They wanted to be viewed and thought about as SPECIAL, Important, Selected, Preferred, best-loved, chosen, favoured, favourite, preferable, preferential. Over and above their already privileged calling as Jesus’ Apostles.

Who were these sons of Zebedee?

This account is repeated almost word for word in Mark’s Gospel, but in his account we’re told expressly who the sons of Zebedee are; James and John. Mark 10:35-45.

What do we know of James and John? They did indeed become great in God’s Kingdom, but they also became two of the most blessed servants the church has ever known. Their greatness didn’t come about by LORDING it over people, but serving the brothers and sisters; James in Jerusalem and John gave us awesome teaching in his Gospel and the 1, 2 and 3 John and the book of Revelation.

John became known as the beloved Disciple, he was the closest friend of Jesus whilst Jesus was on the earth. He took to heart what Jesus said, and this gentle rebuke of the Saviour took hold in his life.

Before James and John, the sons of Zebedee came to Jesus, with their mother as Matthew records, Jesus had already explained that Kingdom Greatness comes from service towards others; Mark 9:33-35 They came to Capernaum. When he was in the house, he asked them, “What were you arguing about on the road?” 34  But they kept quiet because on the way they had argued about who was the greatest. 35  Sitting down, Jesus called the Twelve and said, “If anyone wants to be first, he must be the very last, and the servant of all.”

So my friends, it’s true in every sphere of life: At work, in the home and in your community. If you want to be GREAT then we must learn to become the SERVANTS of everyone. No matter who they are.

You know, without first coming to Jesus Christ and submitting to His Kingship or Lordship, you’ll never be a servant in His Kingdom. I’ve seen people try and they always end up bitter about others, they’ll try and serve in humility, but without Christ in our hearts we’ll become frustrated, tired and bitter towards others who don’t appreciate what we’re doing for them. We’ll get exhaused and begin to moan about others. My friends, when you are serving Christ, you’ll never get tired of His Kingdom Service, because you know deep down you are not doing it for recognition or greatness, you are serving others out of appreciation for all that Christ has done for you. He’ll fill your heart with His love for people and you’ll just serve, no matter what the response is from others, you’ll keep serving, because you are not trying to win their approval or respect or praise, you’re serving a much higher and more noble calling; You are serving God’s Kingdom.

You’ll serve wherever you are:

We’ll do all of this willingly and full of joy and praise and peace, because we’ve learned what it means to be the Servant of All: We’ve become more like Jesus Christ and we’re full of the Holy Spirit and love.

My friends, How is your Kingdom Service?

“If anyone wants to be first, he must be the very last, and the servant of all.”

If you need a heart to serve better today, then can I encourage you to come to the King of Kings, the Lord Jesus Christ and learn from Him, for He is gentle and kind and will show you what it means to serve and not count the cost.

Have a blessed day in the Service of the Kingdom. Glorify Jesus with the way you live as a servant of all.