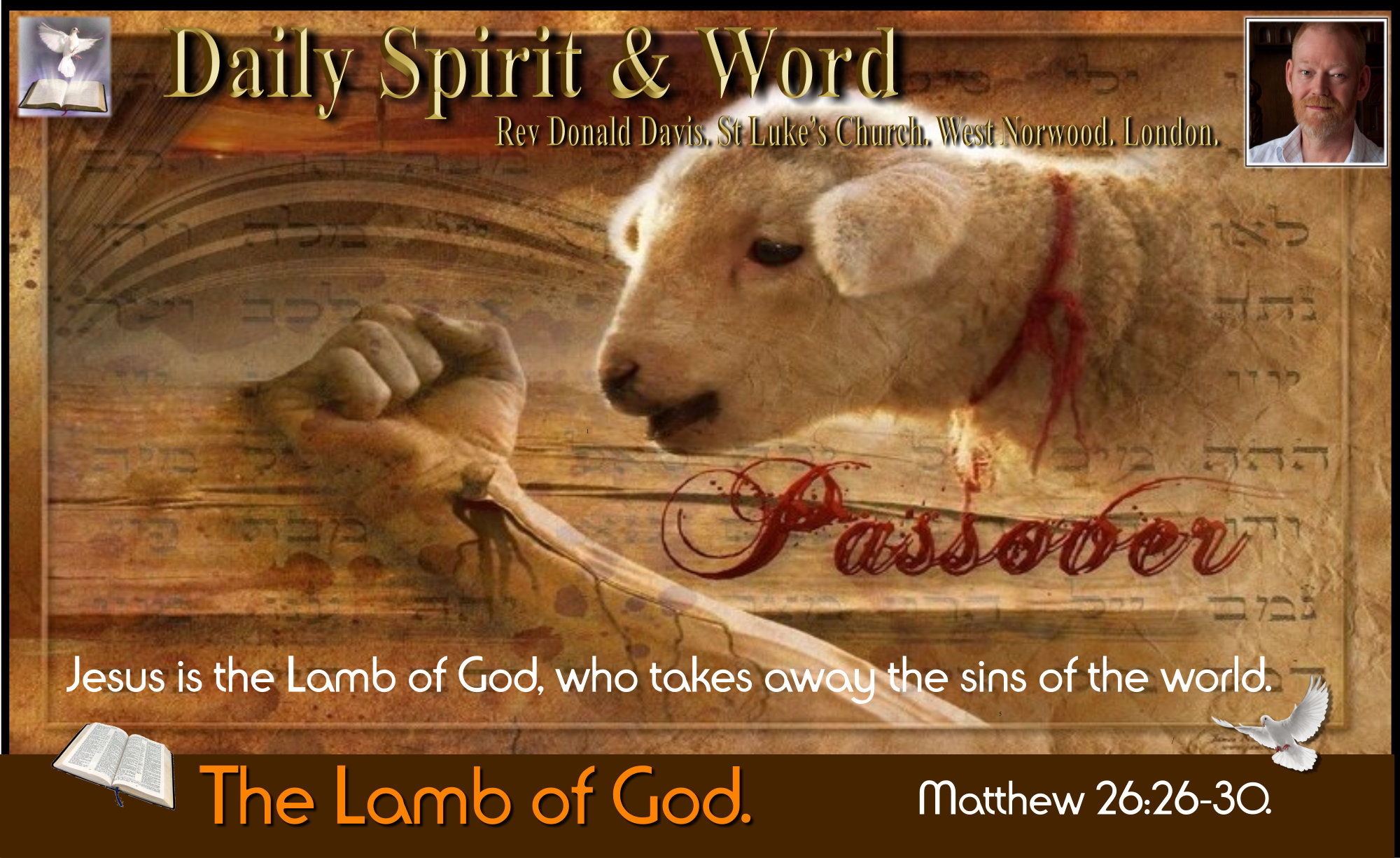 It’s the Sacrificial Lamb that takes away the sins of the whole world, the Lord Jesus Christ was that innocent, spotless, pure and holy Lamb of God.

Jesus Is That Lamb Of God

Good morning my friends, what an awesome evening of street witnessing last night.

Our numbers of regulars on the team are growing. Praise the Lord! Last night; Ben and Judy, David and Sherrie and Matthew and Gemma came. Lloyd couldn’t make it, but he’ll be back next week. We did some training by watching Ray Comfort’s latest video. He was preaching at a Youth Evangelism Conference: His teaching was about “The Greatest Sin in America Today”… You’ll have to watch it (Link at bottom of page).

After getting into conversation about the Video (The main theme being the Idolatrous Sin of America and false Gospel of Just believe in Jesus) we started out later than usual, about 6.20pm. But even though it was quite dark, people stopped and chatted. It was slow to begin with, mainly handing out tracts for Sherrie and I, but then we started getting into good Gospel conversations. Our intention when going out is not just to give people the message or hand out tracts, but to get into conversation with them about Jesus. In the end Sherrie and I had about 8-10 Muslim men all firing questions at us about Jesus Christ. Here in London we’re blessed with people from all over the world and South London, West Norwood, has a growing population of Muslims. I say blessed, because it gives us the opportunity to reach a world-wide audience for Jesus. Some of the men had met me before, we’d given them tracts, they’d obviously been reading them and it had sparked their questions. They asked things like;

These were really great questions; but then came their statements of what they believed: That Jesus was just a prophet, he died, he didn’t rise from the dead, but we believe he’ll come back again after another prophet Mohammed. We don’t believe that Jesus was God.

Changed the subject: Into a presentation of the Gospel.

I asked them all, “Do you think you’ll get into Heaven when you die?”

Each one thought they would. It’s helpful when you have a large crowd to ask each person listening individually, I did this quickly by saying, “What about you?” Then I asked why will you get into Heaven? They all said, “God will forgive us if we say we’re sorry for sinning”… Some added “Genuinely sorry”.

I said, “That’s just so typical, not just of Muslims, but everybody who doesn’t yet know Jesus Christ. Nearly everyone believes that God will forgive them anyway, no matter how they’ve lived, if they are sorry for their sins. Most people believe they are already good enough for Heaven, i.e. they’re not so bad as to deserve Hell forever.

My next statement got their attention: “God will not forgive you just because you are sorry for sinning”. There was a shocked look on some of their faces. I asked them, “What happens to a person caught in the act of stealing in the Middle East?” They all said, “They’ll get their hands chopped off”… Why? “Because it’s Sharia Law”… I said, “That’s right, Sharia Law is Just and must punish those who do wrong, just like UK law, but we don’t chop-off their hands.”… You can bet that every thief caught stealing in the Middle East is “Sorry for Stealing”, because they know they’ll loose their hands, right?” Then I said, “God is far more just than any earthly legal system; In His Holy Righteous Judgement, He’s already stated, “The Soul that sins shall die” no sinner can enter into His Holy Heaven” It’s amazing, they all nodded in agreement.

But they then went onto re-state their beliefs, “God will forgive us if we are genuinely sorry”… Most of them were still trying to justify themselves, but not all by now.

I said, “Listen my friends”, I asked each one their names, and continued, “Even if we’re genuinely sorry for our sins, God cannot just forgive us, He must punish sin, if we’ve not had our sins removed from our souls before we die, then we die carrying those sins with us to face God on Judgement day. “It’s like a thief appearing before a High Court Judge, admitting “guilty as charged your honour, but I’m really sorry”, then the just earthly Judge will say, “Good, I’m glad you are genuinely sorry, I’ll take that into consideration when passing sentence, but I must also punish you for your crime”… A just earthly judge will pass a fine or a term in prison. A holy and righteous God has already revealed what the punishment will be for any sin, eternity in Hell with Satan and his demons. The soul that sins will be cast into the lake of fire with Satan.

The Muslim young men all agreed, but were still clinging to their beliefs that God will just forgive them. I then went through the Commandments with them asking them individually,

“Have you ever stolen something?” They all admitted they had. I said, “The Bible clearly states that no thief can enter into God’s Holy Heaven”.

“Have you ever told a lie?” They all admitted they had. I said, “That breaks God’s 9th Commandment and no liar can enter into Heaven, they’ll have their place in the lake of fire”…

God’s standards of Holiness are far higher and out of reach than our own, so of course we want to justify ourselves. We don’t want to go to Hell do we?

Now imagine how you’d feel if someone, knowing we were all going to be justly condemned to Hell by God’s justice, came into this world and said, “I’m going to take their punishment, I’m going to die in their place for their sins. So that when they appear before God, He’ll allow them in to Heaven, because their sins have been taken away”… How do you think they’d feel about that person?”

The Muslim men said, “You are talking about Jesus and His death upon the Cross”… Yes I said, “Jesus came to die, He was God, but in His love and mercy, God sent His One and Only Son to die in our place upon the Cross, so that everyone who puts their faith and trust in Him and His death, can be forgiven for every sin, cleansed in body and soul, and made fit for entrance into Heaven”…

I asked them, “Does that make sense to you”… Each one said it did, but some of them still wanted more questions answered… I gave them a little booklet about Jesus, “Why did Jesus have to die?”…

Can you see my friends, it’s the LAW of God, the Commandments of God, that shuts the mouth of self-justification, because like a good schoolmaster it leads people to a knowledge of how they’ve sinned against God and their need of a Saviour, i.e. someone who’ll take away their sin and save them from God’s wrath and judgement to come.

Jesus Christ is the Lamb of God, the only pure and holy sacrifice, who takes away the sins of the world. When we put our faith and trust in Him, then all our sins are washed away. When we get baptised we’re showing the world we’ve trusted in Jesus, we’re dead to our old way of living and when we come-up out of the water, we begin to live the new life in Christ Jesus. We’re filled with God’s Holy Spirit, who comes into our soul, gives us New Birth and enables us to live a holy life that pleases God.

Because of the Lamb of God, Jesus who died upon the Cross, His blood cleanses us from sin and enables us to enter into Heaven when we die. Praise the Lord! We have passed from death to life.

We may never know what will happen with those Muslim young men, I’m praying the Lord will give them; Faith to believe in Jesus Christ, Repentance from Sin, New Life and Eternal Life… Will you join me in prayer for them now? As we shook their hands, they wanted us to stay and answer more questions, we invited them to come and join us on Alpha.

Tonight: We’re celebrating the Lord’s Last Supper as we gather in Church. We have all the elements of the traditional Passover and read from God’s Word about the Israelite’s first Passover, then teach about Jesus new meaning of the blood sacrifice from the Gospels.

Matthew 26:26-30 (NIV) Jesus’ Last Passover Meal.
26  While they were eating, Jesus took bread, gave thanks and broke it, and gave it to his disciples, saying, “Take and eat; this is my body.”
27  Then he took the cup, gave thanks and offered it to them, saying, “Drink from it, all of you.
28  This is my blood of the covenant, which is poured out for many for the forgiveness of sins.
29  I tell you, I will not drink of this fruit of the vine from now on until that day when I drink it anew with you in my Father’s kingdom.”
30  When they had sung a hymn, they went out to the Mount of Olives.
The Blood of the New Covenant: Jesus blood sacrifice upon the Cross was to remove and cleanse, to wash away the sins of everyone who trusts in Him. Why do we need our sins washed away? If we died without being cleansed then we’d still be in our sins and we’d face God’s righteous judgement. So my friends, TRUST in Jesus today: Believe that He died for your forgiveness, Repent (renounce and let go of sin), Receive Jesus Christ as your own Lord and Saviour, then LIVE the new life that He’ll give you as you are born of His Holy Spirit.

Have an awesome weekend of celebration of all that Jesus has done.

NOTE: Ray Comfort’s Teaching: “The Greatest Sin in America Today“. It’s not just America’s Greatest Sin, but the sin of a growing number of people in the world today.

NOTES: The Function of God’s Law:

The Function of God’s Law