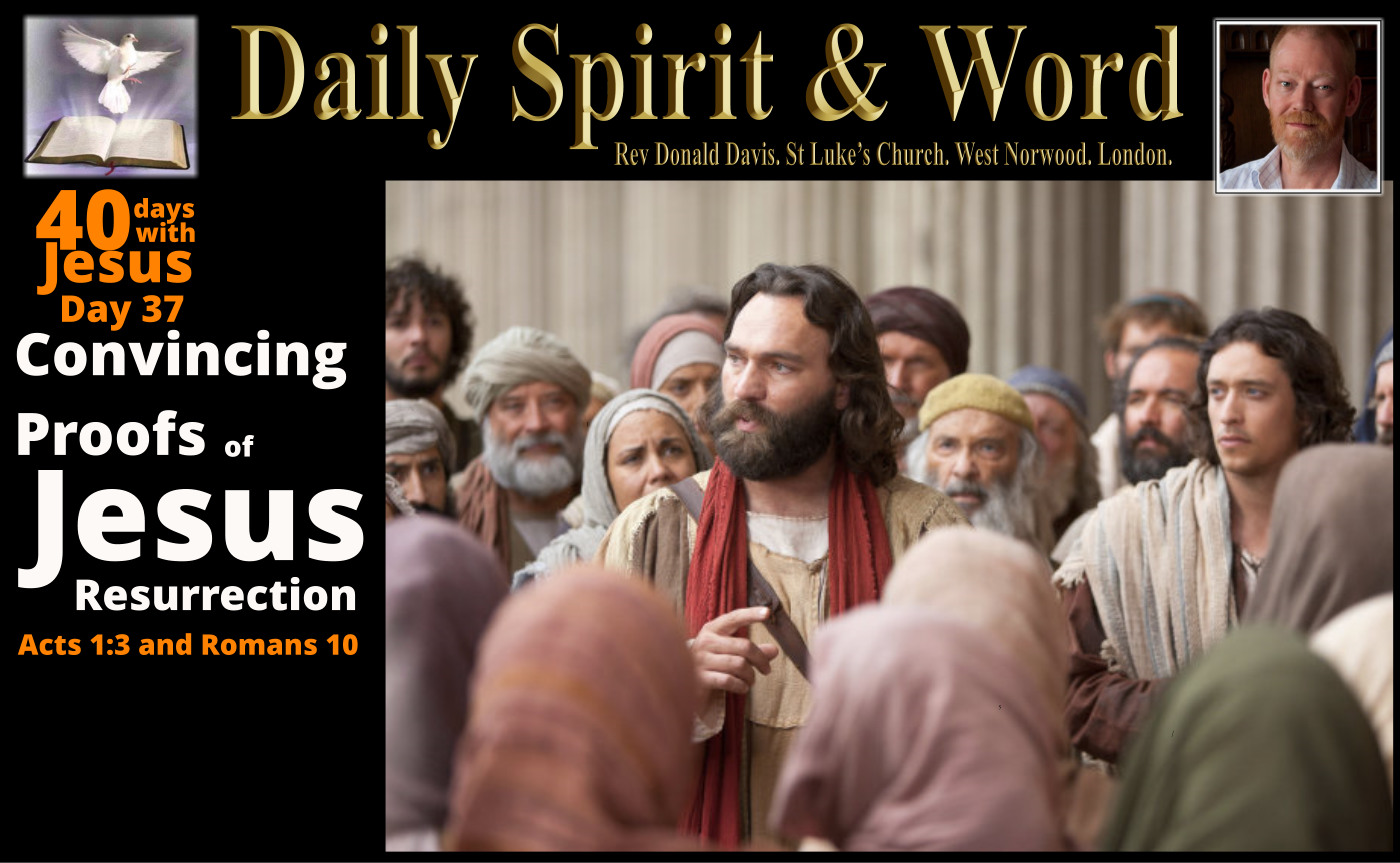 To be able to put your faith and trust in the Lord Jesus Christ today, then, just like the first Disciples, you are going to need some very convincing EVIDENCE and / or PROOFS for all the stuff Christians claim about Him. Thankfully you have that evidence in abundance; historical evidence, personal witness statements from those who were there, but even more convincing, I believe, is the changed lives we find and know today, people who’ve encountered Jesus, who know that He’s alive and have been dramatically transformed as a result of meeting Him.

What a blessing it was to be Baptising Seven Adults in an open air gathering on Pentecost Sunday, yesterday. The plot of land that our church occupies is like an oasis island between two fast flowing rivers of traffic. As we gathered, the traffic built up and slowed to a crawl, London double-decker buses full of people on their way to churches in Brixton, witnessed something you’ll not see often in a crowded city: A big pool of water with a circle of seats around about it and people beginning to gather, to them it could mean only ONE THING: BAPTISM. But to others it might have appeared a weird or strange occurrence. For me it was the evidence that so many need today, the proof that thousands are looking for, that there are still people alive today that are willing to publicly demonstrate to the world that they BELIEVE in Jesus Christ enough to become a public spectacle, to undergo total immersion in water. It was a symbolic act, to show that they had died to their old way of living and were beginning a new life when they come up out of the water, to live from that moment on as Christians, followers of the Living Lord Jesus Christ.

But what was it that had so convinced those seven Candidates; Jannick, Manuella, Shaunetta, John, Josi, Doreen and Betty, to take this step of faith? Well, just as the first Disciples needed convincing proofs and evidence that Jesus had actually risen from the dead, so too did they.

Acts 1:3 (NIV) “After his suffering, he (Jesus) showed himself to these men and gave many convincing proofs that he was alive. He appeared to them over a period of forty days and spoke about the kingdom of God.”

Our Candidates have completed 40 Days of Preparation, but Jesus own disciples had 40 Day With Jesus too, during that period Jesus came to them, we’re only told about a few of those visits in the Bible, but what we are told in enough to wet our appetite, to engage our imagination and to excite our investigative minds; prompting questions like; “Could these things actually be true?”, “Is Jesus alive now?”, “Can I really know Jesus and meet with Jesus today?”, “Is this person called ‘Holy Spirit’ available and ready to come into my soul?” After, listening to talks, reading further Bible passages, prayers, worship and discussion, then comes the pondering and the meditation, then the sought for personal experience and evidence that everyone needs. You see my friends, it my personal conviction that people still require PERSONAL PROOF of all the things that Christians and the Bible claim about the Resurrected Lord Jesus Christ.

How did they get it? The Bible actually explains it for us: “Faith COMES by Hearing”. It doesn’t come because we somehow work ourselves into belief. You don’t have to squeeze faith out like you do toothpaste from a tube. Here’s how it happened for them and for every single believer in the world today; you see my friends, most people believe before they are Christians, that in order to be saved by Jesus, you must be a very good person, a righteous person. They believe they become righteous by coming to Church, by reading the Bible and by praying or being baptised and performing all the other things that ‘genuine’ Christians do. However, this is just foolish nonsense, there’s NOTHING good we can do to make us into Christians, it’s not right living that makes you are Christian, but an act of FAITH.

God has taken the initiative my friends and explains to us through Paul’s letter to the Believers in Rome HOW we are NOT saved and HOW we ARE saved by Jesus:

How We Are NOT Saved:

Romans 10:1-4 1  Dear brothers and sisters, the longing of my heart and my prayer to God is for the people of Israel to be saved.
2  I know what enthusiasm they have for God, but it is misdirected zeal.
3  For they don’t understand God’s way of making people right with himself. Refusing to accept God’s way, they cling to their own way of getting right with God by trying to keep the law.
4  For Christ has already accomplished the purpose for which the law was given. As a result, all who believe in him are made right with God.

So we’re NOT saved by observing some ‘religious’ laws.

He goes on to explain that Moses showed if we are to be SAVED by God’s LAW (revealed in the 10 Commandments), then we’d better be 100% perfect.

Romans 10:5 5  For Moses writes that the law’s way of making a person right with God requires obedience to all of its commands.

Now Paul goes on to explain that we are not saved by the LAW or ‘any religious observance at all’, but we are SAVED by FAITH alone in Jesus Christ alone.

Romans 10:5-21 5  For Moses writes that the law’s way of making a person right with God requires obedience to all of its commands.
6  But faith’s way of getting right with God says, “Don’t say in your heart, ‘Who will go up to heaven’ (to bring Christ down to earth).
7  And don’t say, ‘Who will go down to the place of the dead’ (to bring Christ back to life again).”
8  In fact, it says, “The message is very close at hand; it is on your lips and in your heart.” And that message is the very message about faith that we preach:
9  If you confess with your mouth that Jesus is Lord and believe in your heart that God raised him from the dead, you will be saved.
10  For it is by believing in your heart that you are made right with God, and it is by confessing with your mouth that you are saved.
11  As the Scriptures tell us, “Anyone who trusts in him will never be disgraced.”
12  Jew and Gentile are the same in this respect. They have the same Lord, who gives generously to all who call on him.
13  For “Everyone who calls on the name of the LORD will be saved.”
14  But how can they call on him to save them unless they believe in him? And how can they believe in him if they have never heard about him? And how can they hear about him unless someone tells them?
15  And how will anyone go and tell them without being sent? That is why the Scriptures say, “How beautiful are the feet of messengers who bring good news!”
16  But not everyone welcomes the Good News, for Isaiah the prophet said, “LORD, who has believed our message?”
17  So faith comes from hearing, that is, hearing the Good News about Christ.
18  But I ask, have the people of Israel actually heard the message? Yes, they have: “The message has gone throughout the earth, and the words to all the world.”
19  But I ask, did the people of Israel really understand? Yes, they did, for even in the time of Moses, God said, “I will rouse your jealousy through people who are not even a nation. I will provoke your anger through the foolish Gentiles.”
20  And later Isaiah spoke boldly for God, saying, “I was found by people who were not looking for me. I showed myself to those who were not asking for me.”
21  But regarding Israel, God said, “All day long I opened my arms to them, but they were disobedient and rebellious.”

Did you see it my friends, we are not saved by being religious or by observing God’s moral laws, but by our FAITH and TRUST in the Living Lord Jesus Christ? Also, did you notice HOW we get that saving FAITH? It’s in verse 17 “Faith comes by hearing God’s Word, the good news about Jesus”.

Faith is something you exercise once you’ve become convinced of the truth. Once you believe in your heart that Jesus is alive, that He’s risen from the dead, that He died on the cross for your sins, so that you can be saved from God’s wrath and anger against sin that leads to death and helll. However, being convinced of the truth is not enough, you’ve now got to EXERCISE that conviction and the Bible calls that SAVING FAITH. You will become so CONVINCED that you’ll want to put your trust in Jesus for forgiveness of your sins and salvation from Hell. You’ll receive Him as your Lord and Saviour. i.e. “Everyone who calls on the name of the Lord, will be saved” That calling-out to Jesus comes from an awareness that without Christ as your Lord and Saviour, you are on your way to face God’s Judgement and Hell. Why? Because “All have sinned and fallen short of the glory of God” We’ve all broken God’s Commandments, God’s Law revealed through Moses. We can’t keep it at all, and we’ve; lied, stolen, cheated, rebelled against our parents, worshiped false gods of our own creation (idolatry and false religious practices). We’ve all been guilty of trying to save ourselves, when what we really needed to do was admit that we need God in our lives in order to be able to live righteously for Him.

We all need convincing PROOF: That proof comes by actually giving up time and hearing and listening and pondering God’s WORD about Jesus Christ. How He came into the world to SAVE sinners, to save those who were headed for God’s Judgement for sin, but by His GRACE and MERCY, He sent Jesus to die in our place upon the cross, so that we could be saved once we trusted in Him.

Call out to Jesus today, exercise the faith you’ve been given and trust Him as Lord NOW.

Have and awesome week my friends.