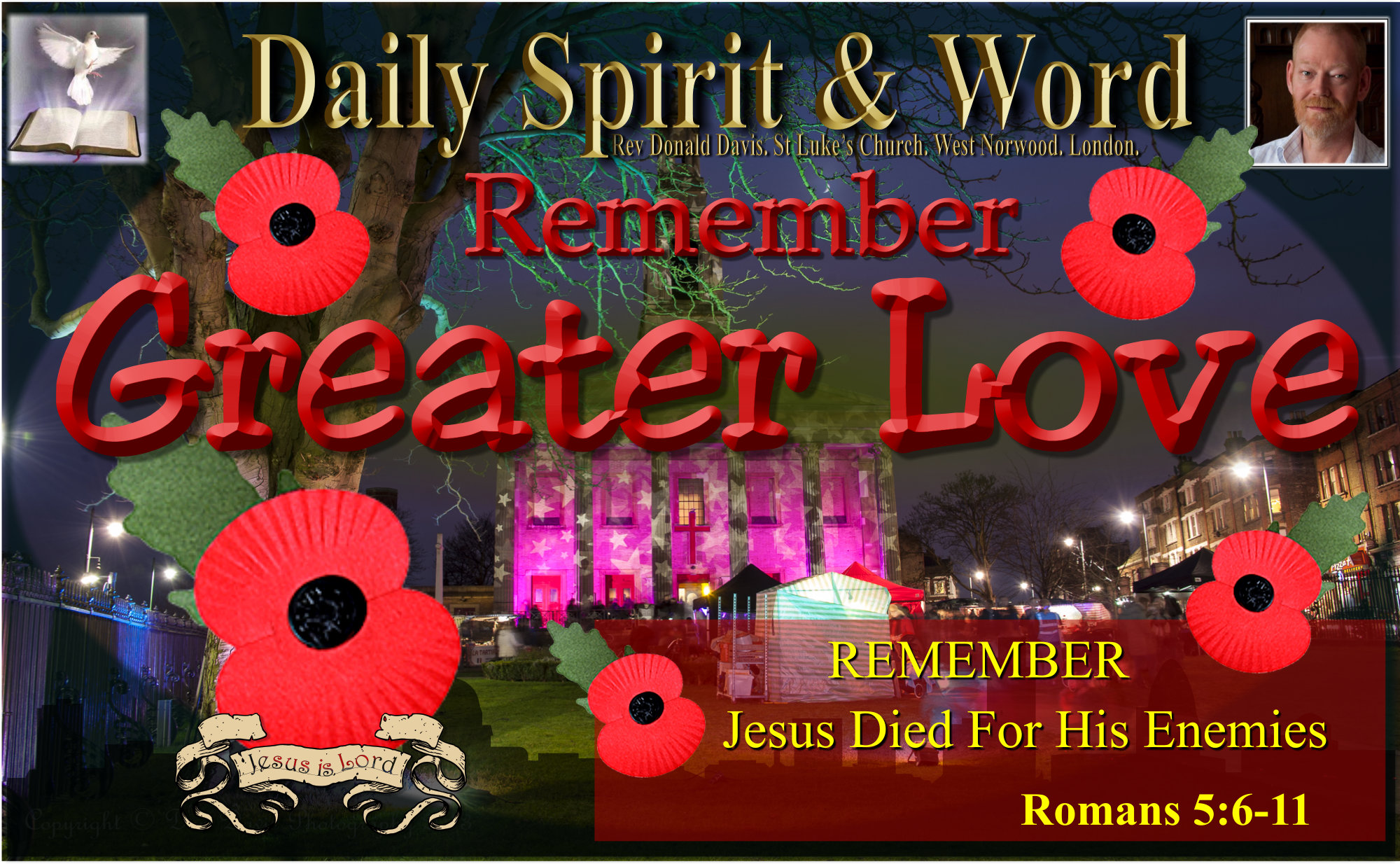 He Died For His Enemies

John 15:13 “Greater love has no-one than this, that he lay down his life for his friends.”

Good morning my friends, what joy filled my heart this morning as I sat outside watching the sunrise and the sheer beauty and colour in the sky and clouds; Awesome is too little a word for it. Thank you Father for your brilliance!.

Yesterday we had our Remembrance Service in St Luke’s Church. A few of our congregation stayed away, because they think holding a Remembrance Service is like rattling swords and glorifying war. However, I believe we should honour those who’ve been called up to serve their Country. Yes, we must all admit that Politicians can get it wrong, that sometimes we go to war for the most foolish and evil reasons, as the UK did during the Iraq war. The Nation was led to believe that Saddam Hussein was about to use WMD (Weapons of Mass Destruction). However, it was just a made-up excuse for what the Americans were calling “Regime Change”… They wanted to get rid of Saddam. In the process so many innocent people lost their lives, the beautiful country of Iraq now lies in ruins, with many hundreds of thousands dead, many more than would have been if Saddam had been allowed to govern and we’d used Diplomacy to bring him in line with the modern civilised world.

So perhaps is not right to glorify war: But there are times when EVIL needs to be fought: The evil of the Nazi Germany for instance, hell-bent on the destruction of the Jewish race and world-wide domination. However, was that the reason that Britain went to war? No! It was because of our treaty with Poland; only later on did the population discover the horrors of the Nazis.

The Beautiful Sky: The red tones of the sunrise reminded me of the crimson red of the poppy and the blood of the Lord Jesus.

John 15:13 “Greater love has no-one than this, that he lay down his life for his friends.”

But Jesus didn’t just give His LIFE for His friends; He gave it up for His enemies too: for the whole world.

Jesus Died For All His Enemies:

Romans 5:6-11 Why Christ Died: To Reconcile Us To God.
6  You see, at just the right time, when we were still powerless, Christ died for the ungodly.
7  Very rarely will anyone die for a righteous man, though for a good man someone might possibly dare to die.
8  But God demonstrates his own love for us in this: While we were still sinners, Christ died for us.
9  Since we have now been justified by his blood, how much more shall we be saved from God’s wrath through him!
10  For if, when we were God’s enemies, we were reconciled to him through the death of his Son, how much more, having been reconciled, shall we be saved through his life!
11  Not only is this so, but we also rejoice in God through our Lord Jesus Christ, through whom we have now received reconciliation.

My friends, look at the text above, whilst we were still powerless: i.e. we couldn’t save ourselves from God’s wrath, nothing we could do could remove the stain of sin, we were God’s enemies. Jesus went to war with SIN, gave HIS LIFE, to satisfy God’s righteousness, anger against sin and His holy justice, now we can be reconciled to God through His DEATH, He won the war. The Enemy has been defeated and we can be changed from God’s enemies through His Son’s death to His friends: Reconciled. More than that we can become members of God’s own family. What an amazing and beautiful crimson picture of God’s love.

In Flanders fields the poppies blow
Between the crosses, row on row,
That mark our place; and in the sky
The larks, still bravely singing, fly
Scarce heard amid the guns below.

We are the Dead. Short days ago
We lived, felt dawn, saw sunset glow,
Loved and were loved, and now we lie
In Flanders fields.

Take up our quarrel with the foe:
To you from failing hands we throw
The torch; be yours to hold it high.
If ye break faith with us who die
We shall not sleep, though poppies grow
In Flanders fields.

Don’t think of that poem as keeping war alive or getting revenge for dead comrades, but for our LORD’S SAKE we take up His torch against His enemy SIN.

Imagine, we could all give our life for a friends, but Jesus did it for His most bitter opponents: What LOVE!

We want to put and end to war, true, but let it be the war against sin that rages on until Christ returns. We owe Him a debt of gratitude, so let’s get into our battle armour (Ephesians 6:10-20) and wage the war with our Saviour watching our backs. Let’s SAVE as many souls for Heaven as we can whilst we have the torch in our hands.

REMEMBER: How much Christ loved you; whilst you were still His enemy, Jesus Christ died for you. That’s how much He loved you.

One Reply to “Jesus Died For His Enemies”