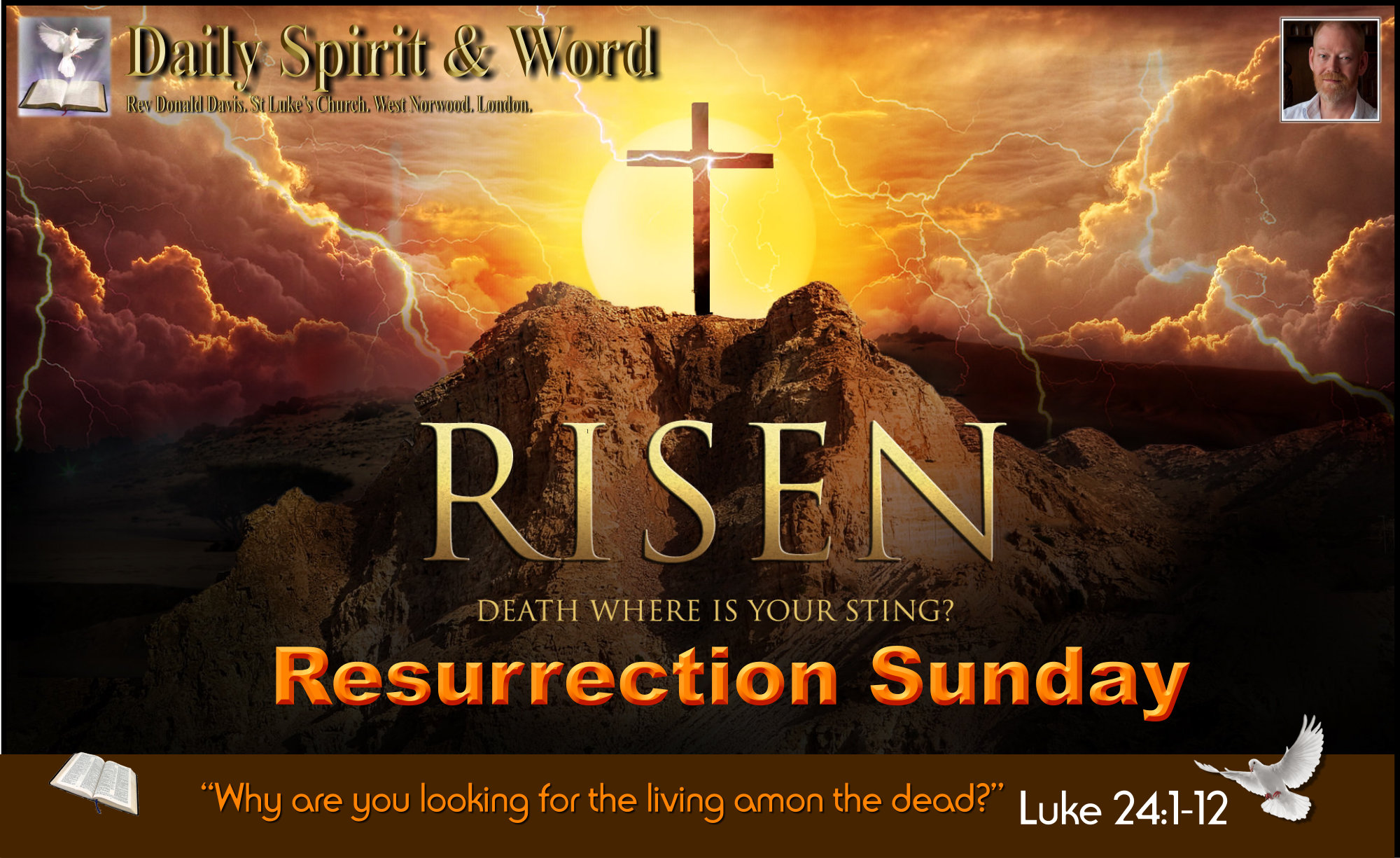 The Angel said to the Crowd of Ladies who went to the Tomb of Jesus, “Why do you look for the living among the dead, He is not here; He has risen”

I love that song / hymn of praise “Jesus Christ is alive today, I know, I know it’s true” But how can we KNOW for sure? You need to meet the Risen Saviour.

On this Resurrection Sunday, I want to say, “Happy Easter: i.e. I want all of you to have an enjoyable holiday time with friends, family, children with Easter Eggs and a lovely Easter Sunday Dinner etc, but I’m looking for another word, other than Easter, because it’s not Easter we Christians are celebrating, but the Resurrected LIFE of our Lord and Saviour Jesus Christ. So I’m going to say, “Happy Resurrection Sunday” instead.

Let’s share that with Each other NOW: Say to your friends and family members, “Happy Resurrection Sunday”… Let the world KNOW we’re really celebrating the fact the Jesus Christ has risen from the dead.

The Traditional Greeting on Resurrection Sunday is: “Christ is Risen”, and the crowds respond with, “He has Risen indeed, Alleluia”.

1 Corinthians 15:1-8 (NIV)
1  Now, brothers, I want to remind you of the gospel I preached to you, which you received and on which you have taken your stand.
2  By this gospel you are saved, if you hold firmly to the word I preached to you. Otherwise, you have believed in vain.
3  For what I received I passed on to you as of first importance: that Christ died for our sins according to the Scriptures,
4  that he was buried, that he was raised on the third day according to the Scriptures,
5  and that he appeared to Peter, and then to the Twelve.
6  After that, he appeared to more than five hundred of the brothers at the same time, most of whom are still living, though some have fallen asleep.
7  Then he appeared to James, then to all the apostles,
8  and last of all he appeared to me also, as to one abnormally born.

1) Getting Ready For Resurrection Sunday:

Before we came to church today, we washed our faces (I hope 🙂 ). We did this to get ready to meet and greet one another. We did it to come before Jesus in worship. However, the Lord Jesus wants us to get ready in another way, to get ready for Resurrection Sunday.

Luke 23:50-56, 24:1-12 (NIV) Women Get Spices and Perfume Ready.
50 Now there was a man named Joseph, a member of the Council, a good and upright man,
51  who had not consented to their decision and action. He came from the Judean town of Arimathea and he was waiting for the kingdom of God.
52  Going to Pilate, he asked for Jesus’ body.
53  Then he took it down, wrapped it in linen cloth and placed it in a tomb cut in the rock, one in which no-one had yet been laid.
54  It was Preparation Day, and the Sabbath was about to begin.
55  The women who had come with Jesus from Galilee followed Joseph and saw the tomb and how his body was laid in it.
56  Then they went home and prepared spices and perfumes. But they rested on the Sabbath in obedience to the commandment.

Those women didn’t know that Jesus was alive, they thought they were going to anoint a dead body with spices and perfumes, but what a shock and wonderful surprise they were about to get.

We too can get ourselves ready for Resurrection Sunday: By coming to Jesus and being forgiven and purified from all our sins.

Jesus died upon that Cross so that we can be forgiven: Let’s make sure we’re smelling good for Jesus today. Confess any known sin in your life right now. Take time to do this: Perfumed and Perfect in Christ: Forgiven and Cleansed from all sin. His blood purifies us from ALL SIN.

Easter Eggs: Shape of a Stone: The Stone The Angels Rolled Away.

Luke 24:1-12 (NIV) Revelation For Resurrection Sunday.
1 On the first day of the week, very early in the morning, the women took the spices they had prepared and went to the tomb.
2  They found the stone rolled away from the tomb, 3  but when they entered, they did not find the body of the Lord Jesus.
4  While they were wondering about this, suddenly two men in clothes that gleamed like lightning stood beside them.
5  In their fright the women bowed down with their faces to the ground, but the men said to them, “Why do you look for the living among the dead? 6  He is not here; he has risen! Remember how he told you, while he was still with you in Galilee: 7  ‘The Son of Man must be delivered into the hands of sinful men, be crucified and on the third day be raised again.’ “
8  Then they remembered his words.
9  When they came back from the tomb, they told all these things to the Eleven and to all the others.
10  It was Mary Magdalene, Joanna, Mary the mother of James, and the others with them who told this to the apostles.
11  But they did not believe the women, because their words seemed to them like nonsense.
12  Peter, however, got up and ran to the tomb. Bending over, he saw the strips of linen lying by themselves, and he went away, wondering to himself what had happened.

Did you get your revelation today? I got mine, because I didn’t realise that there were so many women at the tomb that day. I’ve been reading these same passages for over 30 years now, I’ve never noticed it was more than THREE… There was a crowd of ladies, we don’t know how many, but more than three.

I got another revelation: In every encounter with the Resurrected Christ there’s: Revelation (He’s not dead or they meet him, the see him, they can touch him, he eats with them. Then Jesus or the Angels instruct those to whom revelation is given. Then they are commissioned: Go and Tell… WOWzer! That’s the same for you and me.

3) Getting Your Commission On Resurrection Sunday. (GO).

In a few moments I’m going to say “Go” You’ll go and find some Easter Eggs hidden in the Church… But I want to say a bit more about How The Lord Commissioned Us: But I want you to see: That at each encounter with Jesus Resurrection: There’s Revelation, Physical Proof, Explanation / Instruction from the Scriptures and Commission.

Luke 24:36-49 (NIV) Jesus Appeared, Showed hands and feet, ate, explained the Scriptures, commissioned and blessed.
36  While they were still talking about this, Jesus himself stood among them and said to them, “Peace be with you.”
37  They were startled and frightened, thinking they saw a ghost.
38  He said to them, “Why are you troubled, and why do doubts rise in your minds?
39  Look at my hands and my feet. It is I myself! Touch me and see; a ghost does not have flesh and bones, as you see I have.”
40  When he had said this, he showed them his hands and feet.
41  And while they still did not believe it because of joy and amazement, he asked them, “Do you have anything here to eat?”
42  They gave him a piece of broiled fish, 43  and he took it and ate it in their presence.
44  He said to them, “This is what I told you while I was still with you: Everything must be fulfilled that is written about me in the Law of Moses, the Prophets and the Psalms.” (The History, Writings and Poetry of Scripture Reveal Christ).
45  Then he opened their minds so they could understand the Scriptures.
46  He told them, “This is what is written: The Christ will suffer and rise from the dead on the third day,
47  and repentance and forgiveness of sins will be preached in his name to all nations, beginning at Jerusalem.
48  You are witnesses of these things. 49  I am going to send you what my Father has promised (The Holy Spirit); but stay in the city until you have been clothed with power from on high.”

What JOY!
What Amazement!

Imagine seeing your beloved Messiah again after He died upon the Cross: Alive? After the beating, the betrayal, the brutality; ALIVE…

NOTICE: At each of the Resurrection Appearances in Luke’s Gospel: there is first Revelation, then Explanation, then Commission.

My friends, when you Come to Faith in Jesus: i.e. You know Him, that He is ALIVE.

Then you get to know more about Him from the Bible, the Scriptures.

Then you get to Go for Him, to tell the world: Beginning in your family, neighbourhood, area, country, world.

Go and be His Witnesses: Tell about the Resurrected Lord, The Crucified Lord, The Ascended Lord, The Power of the Lord through His Holy Spirit. You go and you tell… For when you tell FAITH COMES to those who’s hearts have been prepared by the Holy Spirit. (Rom 10:17)

My friends, we who believe in The Resurrected Living Lord Jesus Christ have been truly blessed; we have received;

Imagine: Charging up your Mobile Phone every day. And never turning it on to talk with someone.

That’s what it’s like if you are a Christian who’s constantly getting filled with the Holy Spirit and NEVER USING your anointing to do anything good with it. When you know the Resurrected Lord Jesus Christ and have been discipled for a while, then He’s commission you too, to go and use your Holy Spirit gifts for His Kingdom Service. GO!

You know the Resurrected LORD? Good, now go and tell someone about Him. Share Jesus… Have an AWESOME Resurrection Sunday.

Pease and Joy in Jesus.