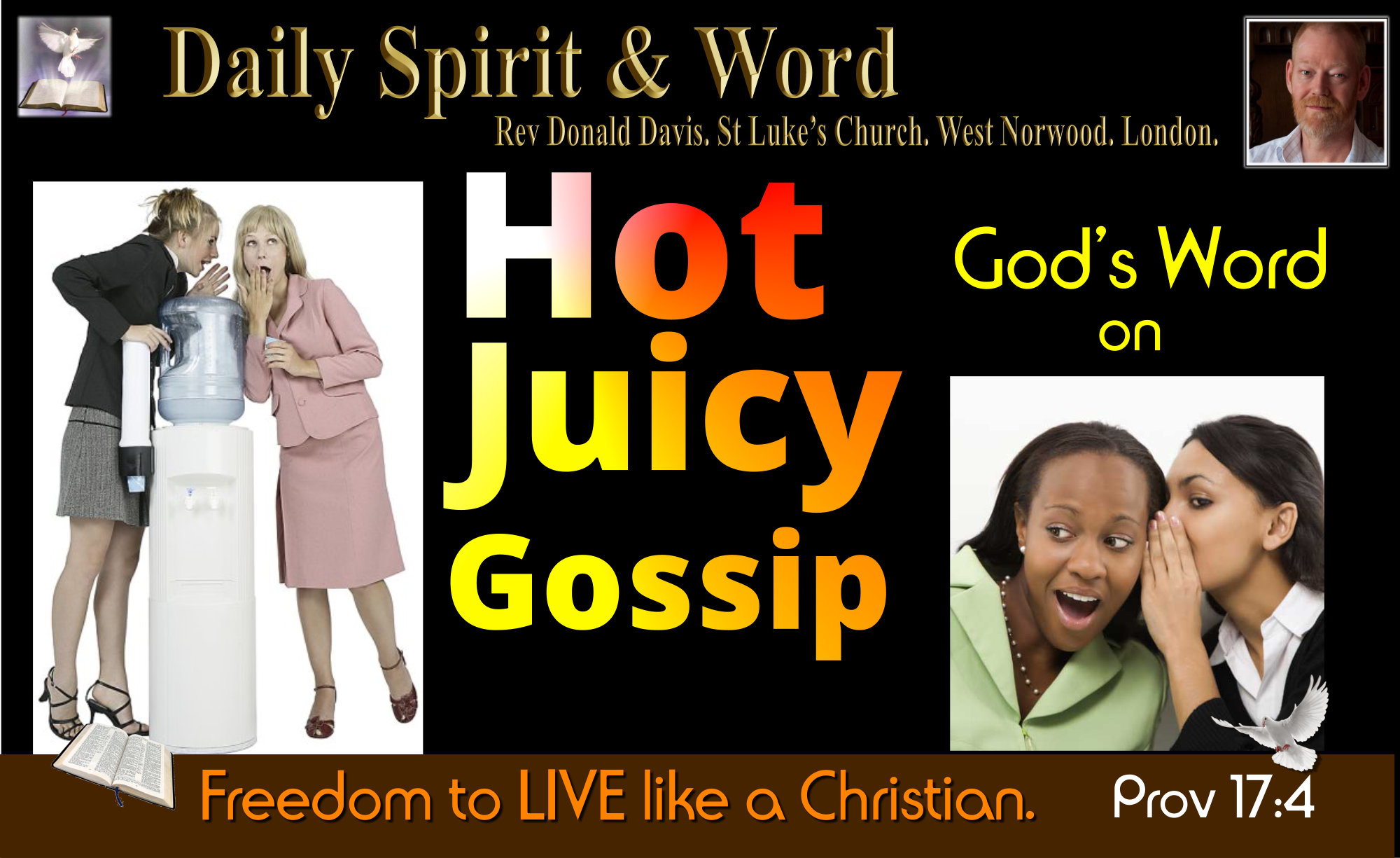 “When I Gossiped, I Sinned.”

“Oh LORD, help me to stop loving all that juicy hot gossip. Amen.”

Good morning my friends, do you know who the most generous people are? Gossips! Why? Because a gossip’s idea of generosity is to keep nothing to himself. HaHa… but seriously, gossip is not funny.

▶ noun: casual or unconstrained conversation or reports about other people, typically involving details which are not confirmed as true: “he became the subject of much local gossip.”

▶ verb (gossips, gossiping, gossiped) engage in gossip: “they would start gossiping about her as soon as she left.”

You know the temptation don’t you?

“When a woman lowers her voice, and her friends eyebrows raise”… You know it’s GOSSIP…

Have you ever been engaged in a conversation about someone and had to stop talking because they walked into the room or close enough to hear?

Our interest in GOSSIP reveals something dark within our own personality. Something is missing, we’re feeling insecure, we’re angry, we’re holding a grudge… There’s nothing as good as bad news about someone who’s done you a wrong: But there is, because the very fact that you are enjoying it, means you’ve not really forgiven them.

Prayer: Lord Jesus, All the times I’ve been eagerly listening as someone tells me some juicy news about someone else. Oh LORD! Help me to keep my head and be listening out to Your Holy Spirit always. Convicting? I’ll say… Lord You know my heart, and how so many times I’ve been offended by someone or something, then just waited and longed to hear the GOSS about them?…. Oh LORD, forgive my interest in slanderous news. Cleanse my heart from these kind of dark affections. Amen!

But WHY is Gossip So Tempting?

Why do sincere, Jesus loving, Bible believing, Gospel sharing, Christians, love to gossip about others?

The Bible gives us the answer: “The words of a gossip are like choice morsels; they go down to a man’s inmost parts” (Proverbs. 26:22)

“The words of a gossip are like choice morsels; they go down to a man’s inmost parts” (Proverbs. 26:22)

i.e. Gossip is a bit like the promise of the old Heineken Beer advert, it can reach down into places no other beer can reach… LOL

Gossip, according to God’s Word “goes down into a man’s inmost parts“… It tickles our fancy… It appeals to our flesh… It excites our desires.

1 Peter 4:15 (NIV) “If you suffer, it should not be as a murderer or thief or any other kind of criminal, or even as a meddler.”

A Meddler: is a back-seat driver, a busybody, nosey-parker, it’s a person who meddles in the affairs of others.

Did you know that a Gossip / Gossipper cannot enter into the kingdom of Heaven?

In God’s Eyes: A Gossip is a MURDERER… (Because you are killing someone else with your words).

“Since they thought it foolish to acknowledge God, he abandoned them to their foolish thinking and let them do things that should never be done. Their lives became full of every kind of wickedness, sin, greed, hate, envy, murder, quarrelling, deception, malicious behaviour, and gossip. They are backstabbers, haters of God, insolent, proud, and boastful. They invent new ways of sinning, and they disobey their parents. They refuse to understand, break their promises, are heartless, and have no mercy. They know God’s justice requires that those who do these things deserve to die, yet they do them anyway. Worse yet, they encourage others to do them, too.” (Romans 1:28-32 NLT)

Those who do those things; i.e. like GOSSIP, deserve to die… Ouch! Now that’s so serious.

Isn’t it strange? We always think that things like; murder, adultery, fornication etc.. are so serious that someone needs to be punished for doing them, but NOT Gossip… Yet God’s warning us all today about the seriousness of Gossip, Meddling and Slander.

When we’re honest with ourselves, we’ll readily admit that we have. Let’s admit it to the Lord too:

Dr Dale A Robbins has a wonderful Biblical insight into the Dangers of Gossip.

(Excerpted from his sight).

Things to Remember about Gossip

What to do about Gossip?

“I will watch my ways and keep my tongue from sin; I will put a muzzle on my mouth as long as the wicked are in my presence” (Psalms 39:1).

It’s my hope and prayer that you’re going to have an awesome weekend full of the joy of the Lord Jesus.

Stay close to Him every day and remember to ask for the filling of Holy Spirit. We all need it every day. Amen!