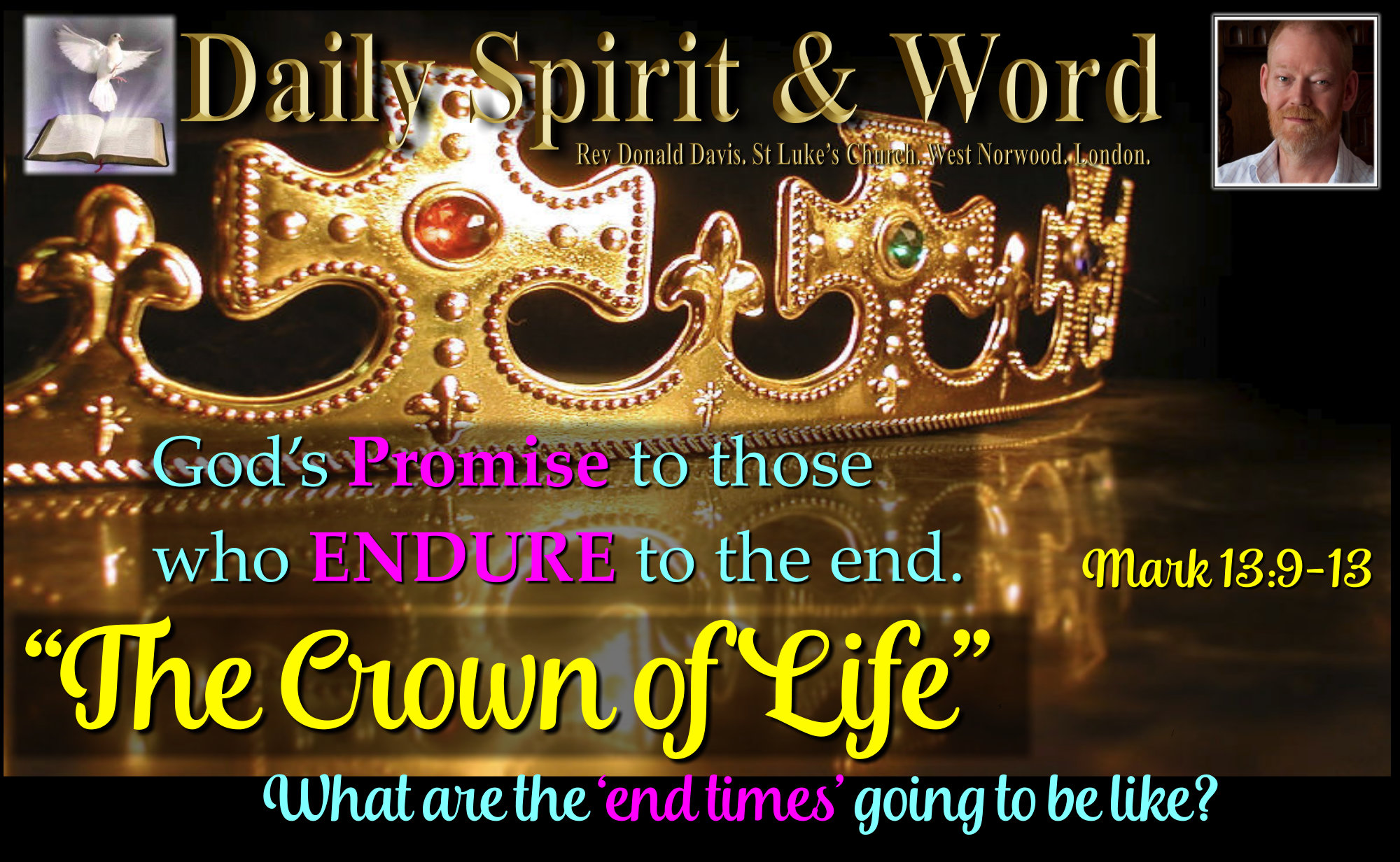 Daily Spirit & Word: 540: God’s Reward For Those Who Endure Persecution.

Standing Firm To The End.

Good morning my friends, we had an amazing visit from e-Gangs Website in church yesterday. It’s an off-shoot ministry of David Wilkerson’s “Teen Challenge”, they are going back to their roots, reaching people who’re involved in the street-gang culture and those who may be drawn into that way of life. Everyone who spoke yesterday had a background in drugs, imprisonment and gangs or street life. They gave powerful testimonies of how God had delivered them from the darkness into the light.

What struck me deeply was the fact that God can and will reach into the hearts of those that we deem ‘un-reachable’. There is no heart or soul that is not like an open book to the Holy Spirit. He can penetrate all the passwords and access the secret places. On the outside a tough gang member looks scary and must appear to be so to his friends, but more often than not on the inside is a frightened, frustrated and fearful little boy. He’s been looking for; family, security, friendship and fun all his life. He’ll find that in gang-culture and we also know that once a person comes to Jesus and surrenders, they’ll also get that in God’s Kingdom Family. Once you’ve got Jesus, you’ve got family and friends.

It was Paul’s wife who spoke powerfully yesterday from God’s Word about Jacob, who was touched in the HOLLOW PLACE and that’s what God needs to do with each and every one of us too; to touch us in the places of need: We fill that void with the things of this world, but they were meant to be filled with the one who created the world and gave us life.

Afterwards, I was speaking with someone who’s family didn’t understand what had happened to him since he trusted Jesus. They saw a change in his nature, character and lifestyle, but they were not yet ready for that kind of change and rejected him. So don’t be surprised if people don’t ‘get you’ once you get Jesus.

“Don’t be surprised if people don’t get you once you get Jesus.”

Mark 13:9-13 (NIV) Persecutions In The End Times.
9  “You must be on your guard. You will be handed over to the local councils and flogged in the synagogues. On account of me you will stand before governors and kings as witnesses to them. 10  And the gospel must first be preached to all nations. 11  Whenever you are arrested and brought to trial, do not worry beforehand about what to say. Just say whatever is given you at the time, for it is not you speaking, but the Holy Spirit. 12  “Brother will betray brother to death, and a father his child. Children will rebel against their parents and have them put to death. 13  All men will hate you because of me, but he who stands firm to the end will be saved.

At the end of Pilgrim’s journey, just before the gates of Heaven, there was another doorway that led to Hell. The Christian must stand firm with Jesus Christ all the way to the end. He never promised us and easy ride through life. Jesus didn’t say, “Come to me and trust me as Saviour and everything will be OK from that point on”. In fact, Jesus warned His followers of the opposition and persecution they would endure for His sake. Just because they were followers of Christ, they’d be hated, lied about and betrayed.

What’s most difficult is the fact that members of a Christian’s own family would betray them, even when that betrayal meant death. This has happened my friends; in History and even today, Christians are being taken to courts, even here in the United Kingdom (UK), just for being obedient followers of Jesus Christ. We’re living in an increasingly ‘Christianophobic’ society; there’s a deep fear and suspicion of believers. Many things are being said about us; “Christians are narrow-minded”, “Christians are bigots”, “Christians hate people” etc…  These accusations are not new, the world has hated Christians from the beginning.

We’ll admit to following a ‘narrow-path’ that leads to eternal life, but that doesn’t mean we’re narrow-minded, quite the opposite in fact, because we know that the Gospel is for everyone, the good news is for all people on earth; that’s the most open minded kind of message I’ve ever heard.

“Christians are Bigots”: What about that statement? What is a Bigot?

Meaning of Bigot: A prejudiced person who is intolerant of any opinions differing from his own.

Well, we’ve got to admit that in some instances we’re guilty of being Bigoted. We do hold opinions, but they are not our own, they come from God. We don’t follow our own understanding or our own logic or reasoning, but we hold unswervingly to the opinions, decrees, dictates and commands of our LORD.

There is an element of truth in every false statement and characterisation of Christians. We can be seen as being bigoted because we will not be shaken from our belief that the plain meaning of God’s Word has a final say in any matter relating to life. However, what’s confusing for the people in the world, those who are still in darkness, is that not everyone who calls themselves ‘Christian’ actually follows God’s Word. It’s only those who are filled and empowered by God’s Holy Spirit who will endure all hardships, accusations and trials to the end.

Jesus has warned us that the world hates (cannot tolerate) committed followers of His teachings.

Not only will you experience this intolerant attitude from the world, but they’ll not be understanding either. They will not take time to sit down with believers and ask them, “Why is it that you think this way?”

Why? Why don’t they want to understand? Why will they run away from a knowledge and understanding of why Christians only follow God’s Word? It’s because deep down, they already KNOW, because God has written His Laws upon their hearts too.

Hebrews 8:10 (NIV) “This is the covenant I will make with the house of Israel after that time, declares the Lord. I will put my laws in their minds and write them on their hearts. I will be their God, and they will be my people.”

Hebrews 10:16 16  “This is the covenant I will make with them after that time, says the Lord. I will put my laws in their hearts, and I will write them on their minds.”

So people who don’t yet know Jesus as LORD, who are still in the darkness, already have God’s LAW (Moral, Holy Standards) written upon their hearts and minds. That’s why they don’t want to know why Christians will not move or change their minds about certain ways of living or being in the world today, because they already KNOW, they just don’t want to live God’s way.

Staying With Jesus To The END:

God wants you to persevere to the end: To HOLD Unswervingly (that could be called in a bigoted or narrow-minded way) to the hope we profess.

Hebrews 10:23-25 23  Let us hold unswervingly to the hope we profess, for he who promised is faithful.
24  And let us consider how we may spur one another on towards love and good deeds. 25  Let us not give up meeting together, as some are in the habit of doing, but let us encourage one another—and all the more as you see the Day approaching.

Remembering HOW you were delivered from DARKNESS into the LIGHT is critically important for believers today: Because this will encourage you to endure to the END.

Hebrews 10:32-36  “Remember those earlier days after you had received the light, when you stood your ground in a great contest in the face of suffering. 33  Sometimes you were publicly exposed to insult and persecution; at other times you stood side by side with those who were so treated. 34  You sympathised with those in prison and joyfully accepted the confiscation of your property, because you knew that you yourselves had better and lasting possessions. 35  So do not throw away your confidence; it will be richly rewarded. 36  You need to persevere so that when you have done the will of God, you will receive what he has promised.”

What is it that God has promised those who endure to the end? The CROWN of LIFE:

God’s PROMISE: The Crown of LIFE:

James 1:12 “Blessed is the man who perseveres under trial, because when he has stood the test, he will receive the crown of life that God has promised to those who love him.”

If we keep in mind eternity, then we’ll always be able to endure any hardship.

This place (anywhere on earth) is NOT the Christian’s HOME or Home Country, because our HOME and our HOPE is HEAVEN.

It is my hope and prayer that every true follower of the Lord Jesus Christ will find fellowship, family and fun whilst here on the earth, but also that if and when things get tough, you’ll also be able to endure every hardship to the end. Praying for Christ’s indwelling power for an exciting week.

Have an awesome week, enduring all things for Christ’s sake.