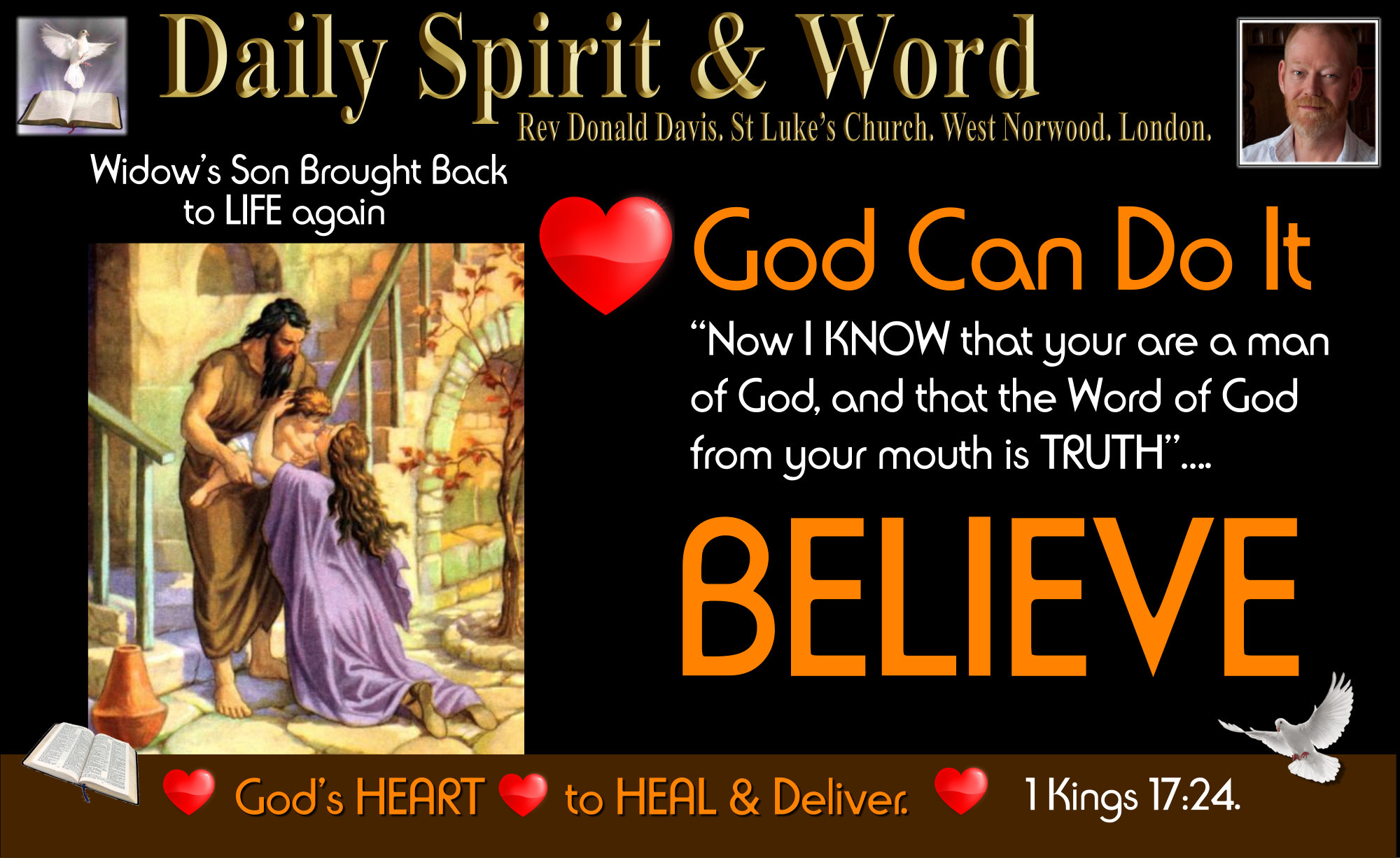 Can The God You Believe In Do Miracles?

“The smile on your face help me know you need me” (Knowing the Father’s Heart).

Good morning my friends, I want to put a huge wide smile on your face today. But not just on your face, on your heart too. The JOY of the LORD is my strength.

All this week we’ve been hearing about those who are sick and dying; friends, good friends, best friends, relatives: But do we actually believe in a God who cares, has compassion, is kind, gentle and loving? These are all attributes of God’s character, yes God is Holy, get’s angry as we heard yesterday, and can be full of wrath and anger against our sins. However, we also serve a God who fully revealed Himself in Jesus and before that in the Old Testament.

Listen with new ears, watch with renewed eyes to see what God is like today:

1 Kings 17:17-24 (NIV)
17  Some time later the son of the woman who owned the house became ill. He grew worse and worse, and finally stopped breathing.
18  She said to Elijah, “What do you have against me, man of God? Did you come to remind me of my sin and kill my son?”
19  “Give me your son,” Elijah replied. He took him from her arms, carried him to the upper room where he was staying, and laid him on his bed.
20  Then he cried out to the LORD, “O LORD my God, have you brought tragedy also upon this widow I am staying with, by causing her son to die?”
21  Then he stretched himself out on the boy three times and cried to the LORD, “O LORD my God, let this boy’s life return to him!”
22  The LORD heard Elijah’s cry, and the boy’s life returned to him, and he lived.
23  Elijah picked up the child and carried him down from the room into the house. He gave him to his mother and said, “Look, your son is alive!”
24  Then the woman said to Elijah, “Now I know that you are a man of God and that the word of the LORD from your mouth is the truth.”

Elijah had gone to a widow’s house, initially she thought she and her son would starve to death because of a famine. But Elijah arrived and the flour and oil didn’t run out, it was a miracle of God’s provision. Now the woman’s son, her only son, died. Just listen to her, the way she’s talking to Elijah: “What do you have against me, man of God? Did you come to remind me of my sin and kill my son?”

Often when tragedy strikes, because we’re hurting we strike out at others. Sometimes the ones who are closest to us, those who’ve been kindest to us, THEY are the ones who get blasted first. It’s both Elijah and God that this woman is shaking her fist at. “Man of God”…

But there’s more: The woman obviously had a past:

Like most of us, she’d not lived a completely righteous life, because somewhere in her past she knew she’d sinned. The knowledge of that sin had not left her, and because of her son’s death, she’d obviously been thinking to herself, “Who’s fault is it that my boy has died? Is it my fault? Did I bring this tragedy upon my son because of the things I did wrong in the past?”

We often do that too: I know I do. Whenever things go wrong, I think to myself, “Oh Lord, to what are you drawing my attention? Could it be something I’ve done?” It’s a good question. But to move from self-examination to attacking the man of God… as if God would be wrong somehow to exercise judgement at any time.

The Boy Comes Back To LIFE:

Just like Jesus who died and rose again from the dead; this boy’s life is restored by the LORD. Jesus was God’s ONE and ONLY Son, who died. The boy was the woman’s one and only son.

Elijah gives the boy back to the woman: Now listen to her response:

1 Kings 17:24 Then the woman said to Elijah, “Now I know that you are a man of God and that the word of the LORD from your mouth is the truth.”

That “NOW I KNOW”: says a lot to me. because even though she’d been experiencing an ongoing miracle of God’s provision i.e. Her flour and oil never ran out: She’s been cooking with it for ages, but deep inside her heart there is an AVENUE OF DOUBT AND UNBELIEF. Those words “NOW I KNOW” shout out to me today.

“Donald, you’ve seen My miracles in the past, so why do you doubt today?”…

Oh LORD! “I have seen your miracles in the past, I know you goodness, kindness, mercy and love, give me a NEW HEART to believe in Your POWER to HEAL today” Amen!

The Oil and Flour Miracles wasn’t enough to move her to repent and trust the LORD completely.

The Resurrection of her son, moved the widow woman to a deeper knowledge and understanding of the LORD.

My friends, the RESURRECTION of God’s ONE and ONLY Son, Jesus Christ, moves me afresh today, to say with the woman, the widow, “NOW I KNOW”….

NOW I KNOW: God can do anything.

BUT: Do YOU Believe He WANTS to do it?

NOW I KNOW: He wants to Heal, Deliver and Forgive… TODAY.

I’m going to be praying much more, much more, for people to experience God’s HEALING touch in their lives. We are going to see miracles my friends.

My friends, doesn’t that put a huge, a massive smile on your face today? Isn’t your HEART warmed and filled with JOY because the LORD is the same, yesterday, today and forever. Amen.

Last night, we had a meeting in church about “Oh Happy Day” West Norwood, London. A festival of JOY. Saturday 16th July (Put the date in your diary and come and see God move).

The Lord gave me this song, it’s a secular song, but it spoke to me of God’s TRUTH: When you say nothing at all:

My friends, God NEEDS you to be His hands, His feet, His heart to go to this hurting world and bring His HEALING: Will you go and touch, speak and heal today?

Some people argue, God can do it, but my friends, He’s chosen a way to do it; through His people. He’s going to do it through YOU! Have faith in the God who wants to Heal today.

Have a fantastic weekend, full of faith, full of trust and full of the JOY of the LORD.