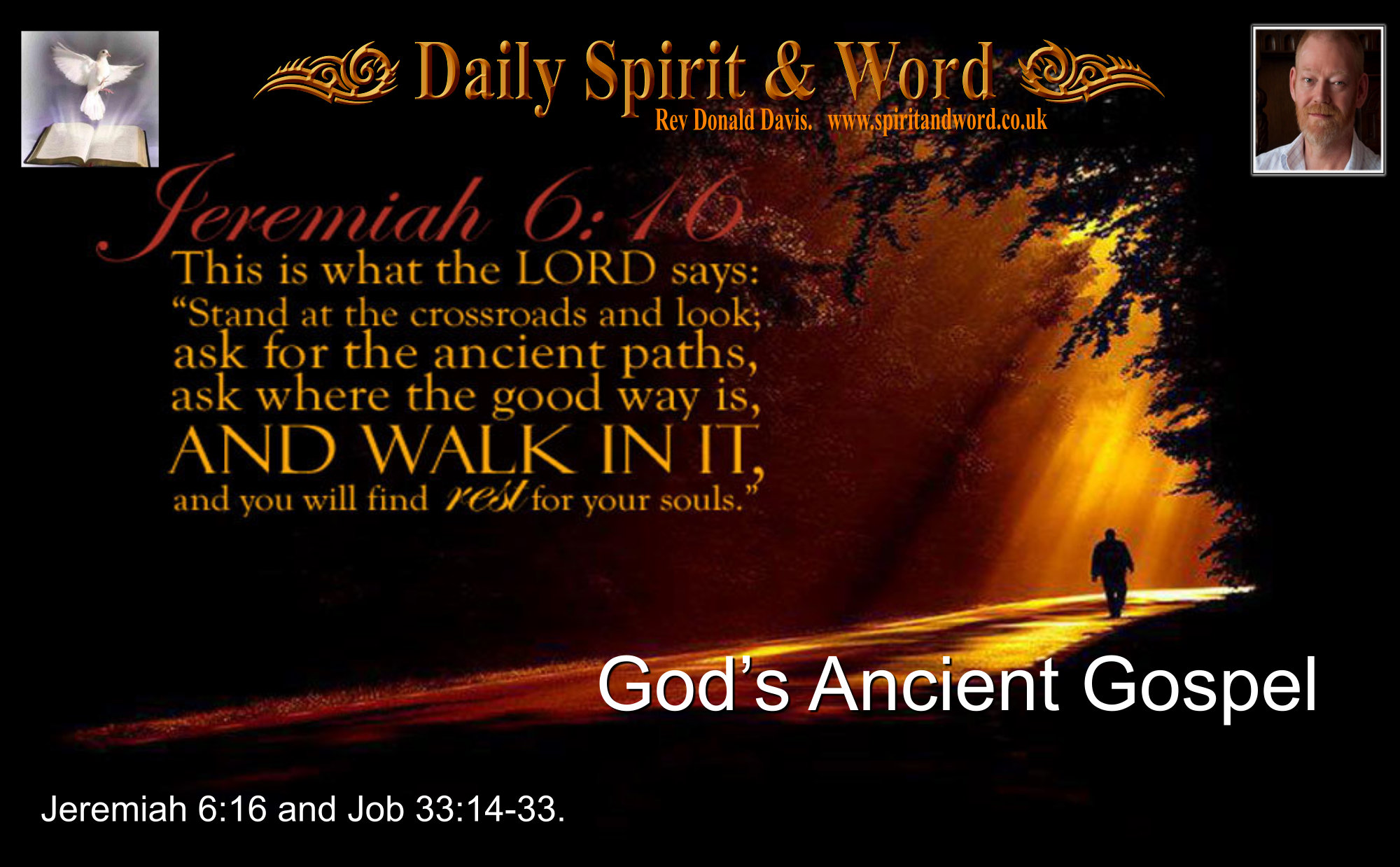 Are not very different to the ways He’s winning, warning and wooing people today.

Good morning my friends, I love the way that bluebells come back every year and seem to get better and better the longer you leave them in the ground. You know my friends, long before the New Testament was completed our ancient brothers and sisters in the faith used the Old Testament to proclaim the Good News of the Lord Jesus Christ. When Paul was writing to Timothy, he understood the Spiritual nature and value of the Scriptures. 2 Tim 3:16-17. Therefore today I’m going to show you that picking up a text from the most ancient of the Old Testament books, the book of Job, which is considered by some to be the oldest, we can see that God used the same ways to lead men to the awareness of their need of a Saviour thousands of years before Christ came and how the LORD provided them with a pathway towards Salvation, New Life and a much closer walk with God.

Our focus text today is from the book of Job.

WOWzer! You think you know the story of a book in the Bible, then the Lord opens it up by His Spirit and you suddenly observe new depths. You know the story of Job: How he was viewed by the LORD as a righteous man, then Satan came to test Job and was allowed to do so by the LORD. Satan wanted to see how far he would need to go to make Job curse God, but God knew Job’s heart and allowed the test. Remember Satan tests and tempts us to make us fail and fall from God’s Grace. The Lord, on the other hand, allows testing to come, so that we’ll be encouraged, strengthened and grow towards maturity in the Christian faith. God wants us to succeed and pass every test.

Some people think that God doesn’t say anything today, but as we’ll see from Job, God’s NOT silent, but uses many different ways to communicate with mankind. Job 33:14  “For God does speak—now one way, now another— though man may not perceive it.”

And in those ancient days it was the same; sometimes men could hear and sometimes, like today, they are DEAF. Jesus indicated that this was so too; (explaining the ancient prophesy of Isaiah) Matthew 13:13-15 “This is why I speak to them in parables: “Though seeing, they do not see; though hearing, they do not hear or understand. 14  In them is fulfilled the prophecy of Isaiah: ” ‘You will be ever hearing but never understanding; you will be ever seeing but never perceiving. 15  For this people’s heart has become calloused; they hardly hear with their ears, and they have closed their eyes. Otherwise they might see with their eyes, hear with their ears, understand with their hearts and turn, and I would heal them.'”

Yes indeed my friends, God speaks today, as He did in ancient times, but there are hard hearts and deaf ears today, just as there were back then.

But their needs were the same then as they are today:

Though men are deaf to God’s voice in Creation, though they may not listen or respond to an evangelist (Messenger), His heart so longs for men to turn in repentance and admit their need of God, that He’ll use the Ancient methods to turn are heart and soul towards Himself.

Kidnappers: When someone gets kidnapped, the kidnappers ask for a RANSOM, it’s the price that needs to be paid to set the captive free.

It’s the same today, God has found the RANSOM, He paid for mankind’s Salvation in the life and blood of His One and Only Son, Jesus Christ. (WOWzer! Can you see the Gospel in the ancient text today?)…. Jesus Christ has died to set mankind free from Sin, Satan and Death and Hell. This is the very verse that JUMPED out at me as I was reading Job this morning… God doesn’t want anyone to perish and end up going down to the pit of Hell, but everybody to come to repentance, that’s why He’s speaking so much to men and women who will not listen to Him.

God used trouble, hardships, warnings, dreams, visions, revelations, to turn a man from the error of his ways. A life lived without reference to God’s Holy Standards, a life lived without God is a Rebellious state and God wants people to come and confess (admit) their sinfulness, to turn from their wicked ways, be converted, and to receive His Divine pardon and New Life.

Job 33:16  “he may speak in their ears and terrify them with warnings, 17  to turn man from wrongdoing and keep him from pride, 18  to preserve his soul from the pit, ….”

My friends, our Souls are even more precious to God than they are to us. No one would sell one of their eyes for even £100,000 punds would we? Would you? NO of course not, but why do we exchange our eternal souls for a few moments of pleasure in this life today? God wants to SAVE us more than we want to SAVE ourselves.

Finally: When We’re SAVED by God the REWARDS are the same.

a) The Ransom Price Has Been Paid: Verse 24. Jesus Christ.

b) The Response Required Is The Same: Job 33:27  “Then he comes to men and says, ‘I have sinned, and perverted what was right, but I did not get what I deserved.” We deserve DEATH & HELL, but God’s GRACE is revealed by the RANSOM price He paid in Jesus Christ.

c) The Reward of LIFE and LIGHT of God’s Glory: Job 33:28  “He redeemed (paid the ransom price) my soul from going down to the pit (Death and Hell), and I shall live to enjoy the light.’

It’s also revealed in our most famous verses from the New Testament: John 3:16-17.

God’s Ancient ways ARE the exact same as His way today:

Jeremiah 6:16 (ANIV) “This is what the LORD says: “Stand at the crossroads and look; ask for the ancient paths, ask where the good way is, and walk in it, and you will find rest for your souls. But you said, ‘We will not walk in it.'”

All God’s People today will say, “I WILL walk in His Ancient paths”… Amen!

That fact that the first Believers preached the Gospel from the Ancient Texts of the Bible should be an encouragement to us today, knowing that God’s WORD is the Inspired, Infallible, and Indefatigable WORD of God. Also, God’s Salvation PLAN has always been the same and His Ancient Gospel is Revealed in it’s pages. Praise the Lord! He’s the same, yesterday, today and forever. Amen.

Have an awesome weekend with your GREAT Saviour, the Lord Jesus Christ.