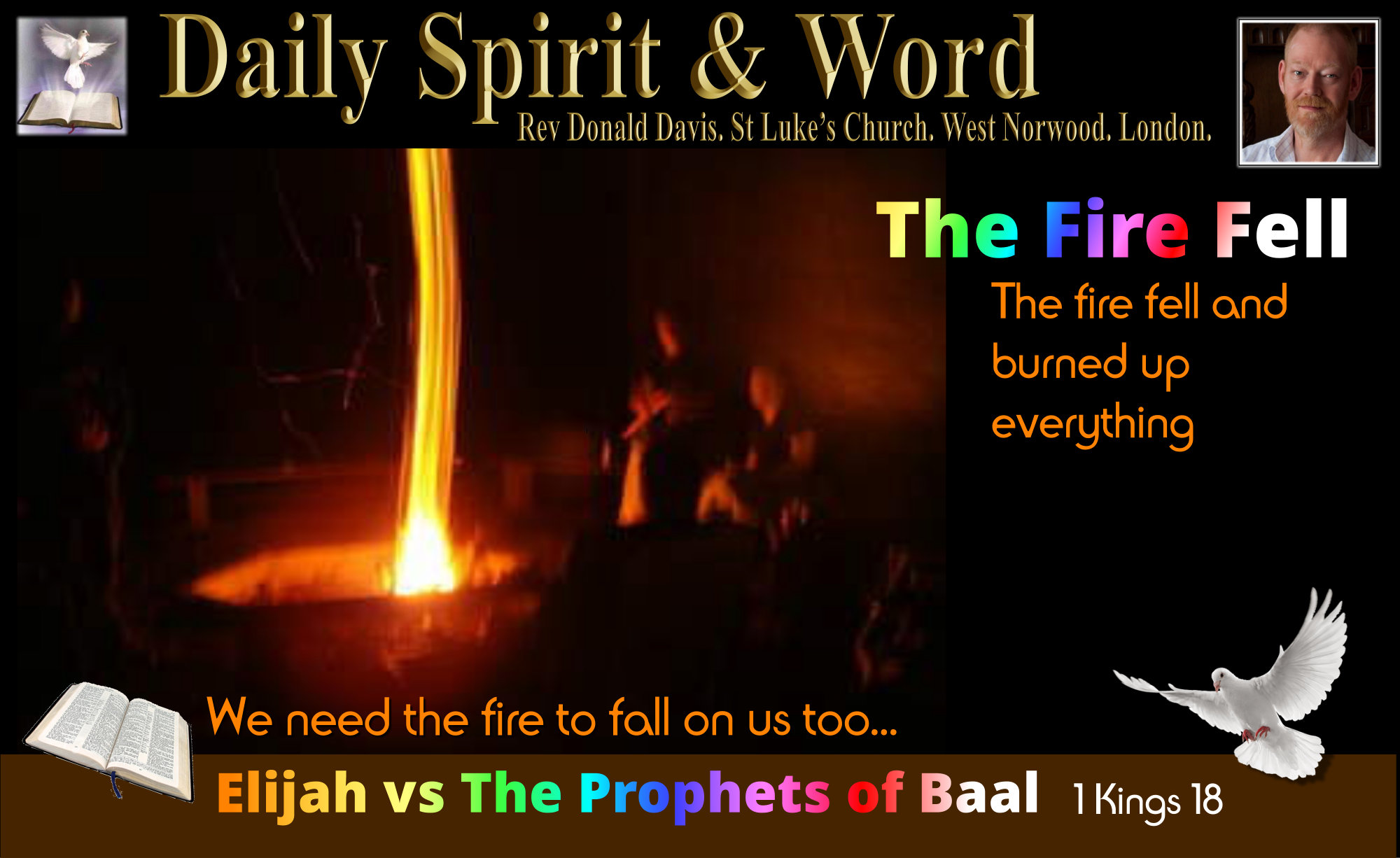 Our God is an ALL CONSUMING FIRE.

Good morning my friends, today we’ve got the funeral of a little baby boy called Alexander. He’s the son of Anja and Ledeaux. It’s such a horrific, shocking and sad thing, but I’m so glad that the LORD has revealed Himself to me and that I serve the Living God. Because without Him I’d be totally useless and powerless. Our God is rich in mercy, grace, kindness and love. God is GOOD all the time: Even when tragedy strikes.

1 Kings 18:38-39 (NIV)
38  Then the fire of the LORD fell and burned up the sacrifice, the wood, the stones and the soil, and also licked up the water in the trench.
39  When all the people saw this, they fell prostrate and cried, “The LORD—he is God! The LORD—he is God!”
God’s Prophet Elijah had a contest with the prophets of Baal, it resulted in a great victory for The One True God over the false god Baal. Today God’s Word speaks to us about the fire that ended the contest between Elijah and Baal’s prophets.

But we must remember some things about Elijah, God and False gods:

A) What Prompted The Fire?

Notice first the “Then.” at the beginning of our first verse today. You don’t want to miss this my friends. The fire came after some real devout, heartfelt, sincere and solemn praying by Elijah. Sometimes we lack the fire of God in our own walk with Jesus and in our congregations because we neglect this kind of prayer before the LORD. It seems that many of us are more interested in position, place and promoting our church and our ministry that we are in the consuming earnest and sincere close relationship with the One who gave us it all. As a result of this neglect (Puting God first in all things) we’ve lost the FIRE of God in our lives. Elijah knew how to respond to those jeering jibes of the pesky prophets of Baal. Prompted by the Holy Spirit, he called for a contest to see which God is the true God. Can you imagine a Christian follower of Jesus asking some devotees of other faiths to a prayer meeting to see who’s God is real? What prompted God’s fire to fall was His relationship with Elijah.

B) What Power There Is In The Fire:

Notice secondly how the POWER of God in the fire CONSUMED. “Then the fire of the LORD fell and burned up the sacrifice, the wood, the stones and the soil, and also licked up the water in the trench.” Oh my friends, the fire that burned like this is not an ordinary or normal fire that you get when you burn wood.

It’s akin to the fireball you get in a nuclear explosion, but it fell on Elijah’s little bundle of wet wood and animal sacrifice.  It was the FIRE of God and it burned-up EVERYTHING: the sacrifice, the wood under the sacrifice, the stones of the altar, the soil around the altar and even the water which Elijah had put in trenches around the altar. It reminds me today that God’s POWER is the SAME POWER that Created the whole UNIVERSE. It’s the power of God that can do amazing, awe-inspiring, jaw-dropping wonders.

I think that we all need this power within us today if we are going to do anything worthwhile for God. That same POWER that Jesus and Elijah had within them is AVAILABLE to us, if we just get closer to the Creator. Jesus spent all night in prayer at times, Elijah prayed and the fire fell. The Disciples were in an upper room praying when the tongues of fire fell upon them (Acts 2). I don’t know about you, but I want that FIRE to fall upon me, we don’t need a Sacrifice like Elijah did, because Jesus is our Sacrificial Lamb of God, but we do need the prayer, when we pray as Elijah did, as Jesus did and as the Disciples did, the FIRE will fall upon us too.

C) What More Proof Do We Need?

Remember this was a CONTEST: between Elijah’s God and the Prophets of Baal. Elijah said “The God that answered by fire would be the true God.” However, because Baal is not a god at all, he could not answer with fire, but  Elijah’s God could because there is NO OTHER God.

Imagine having such a contest today? So many people are looking for this kind of evidence to believe in God today. “Let me win the Lottery, then I’ll believe in you”… “Show me yourself first, then I’ll believe in you” … Why doesn’t God just show Himself? If He did, then everyone will respond in the way they did in our second verse today: “When all the people saw this (the all consuming fire), they fell prostrate and cried, “The LORD—he is God! The LORD—he is God!”

We don’t get this PHYSICAL kind of evidence because God gives us something else: FAITH to BELIEVE. However, our FAITH is just as strong an evidence as the FIRE:

Many times God has given us such proof that Elijah’s fire and the Resurrected LORD gave:

Acts 1:3 (NIV) “After his suffering, he (Jesus) showed himself to these men and gave many convincing proofs that he was alive. He appeared to them over a period of forty days and spoke about the kingdom of God.”

Jesus gave convincing proofs: There’s PROOF or EVIDENCE enough for me and you today: We don’t NEED to see God to KNOW, the fire still comes when we exercise the gift of FAITH, then we’ll KNOW beyond a shadow of a doubt. What more PROOF do we need? Answer: NONE, because Jesus in me is ENOUGH evidence. But when we know Jesus and stay close to Jesus (John 15), then the FIRE can fall.

D) God’s Pity Is In That FIRE:

Did you notice that THE FIRE of the LORD did not burn up the people? It was EVERYTHING but the PEOPLE.

This reminds me today of God’s AMAZING GRACE and MERCY: How He has had pity on mankind, not to BURN US, because He, God, could justifiably burn up those people back in Elijah’s day and all of us today. However, instead of the fire burning them it BURNED up everything but the people. Equally, God could easily BURN all of us, but in His richest grace and mercy He has spared us and let the fire of His wrath and anger against sin fall upon His One and Only Son.

Jesus took our punishment for us: He died so that we don’t need to face the final fiery furnace of God’s wrath and anger. Our God is an ALL CONSUMING FIRE, but He’s waiting patiently for the right number of people to REPENT, then His final FIRE will fall. (2 Peter 3).

2 Peter 3:3-9 (NIV) God’s Patience.
3  First of all, you must understand that in the last days scoffers will come, scoffing and following their own evil desires.
4  They will say, “Where is this ‘coming’ he promised? Ever since our fathers died, everything goes on as it has since the beginning of creation.”
5  But they deliberately forget that long ago by God’s word the heavens existed and the earth was formed out of water and by water.
6  By these waters also the world of that time was deluged and destroyed.
7  By the same word the present heavens and earth are reserved for fire, being kept for the day of judgment and destruction of ungodly men.
8  But do not forget this one thing, dear friends: With the Lord a day is like a thousand years, and a thousand years are like a day.
9  The Lord is not slow in keeping his promise, as some understand slowness. He is patient with you, not wanting anyone to perish, but everyone to come to repentance.

Why wait, let’s fall on our faces and declare today as they did

Don’t let his consuming fire fall on you, but the wonderful FIRE of the Holy Spirit.