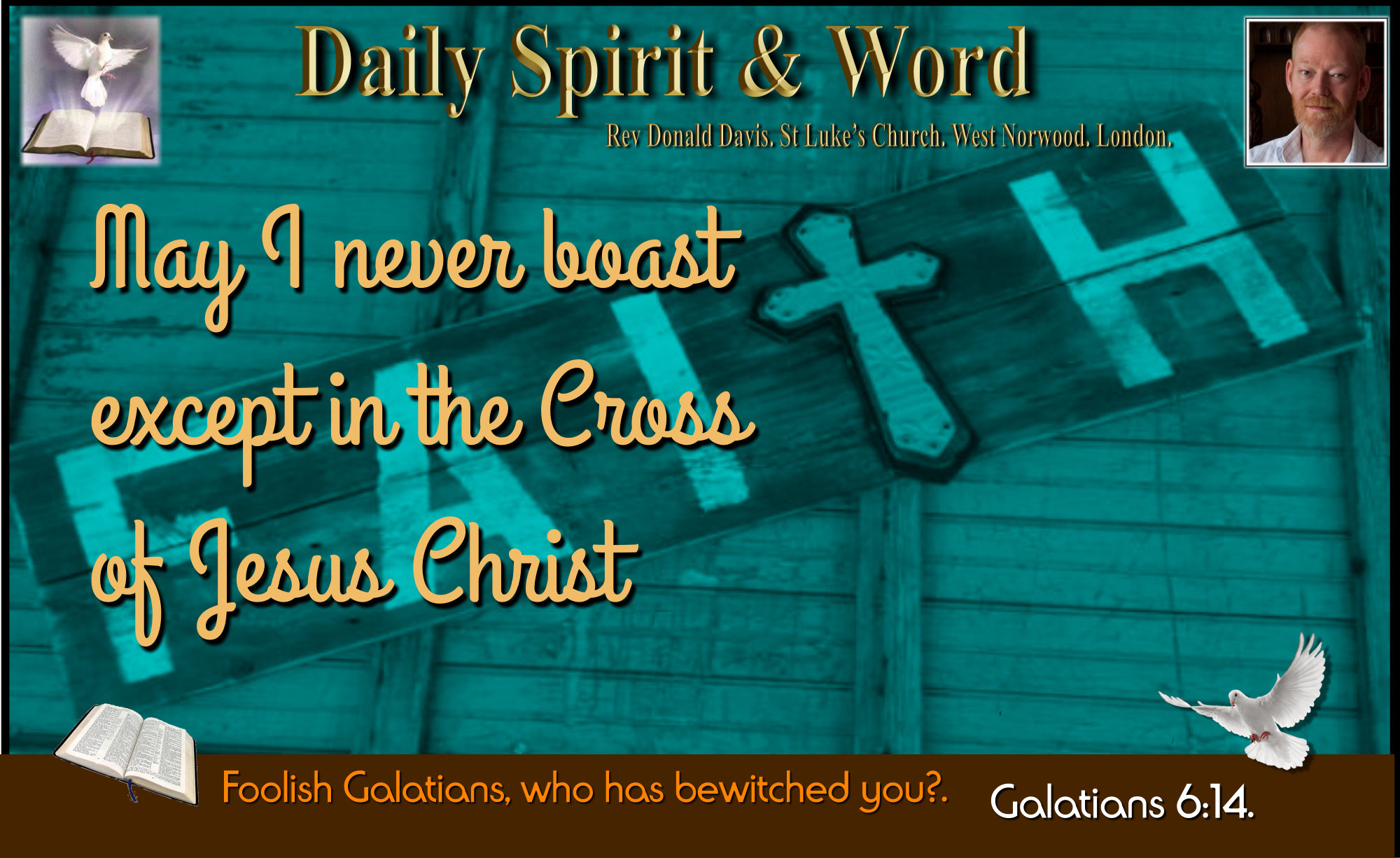 Good morning my friends, I had a wonderful day-off yesterday. Over at my daughter’s house, I was put to work on DIY. I don’t know how you feel about DIY, but I don’t relish the thought. However once I get started it’s quite good fun. Of course I was shadowed by my two year old grandson, Karamoko. He had his tools all ready too, but once he saw my new electric screwdriver, he wanted to play with that. I’ve never seen a kid so enthusiastic about helping with DIY, he loves toolboxes, tools, carrying, lifting heavy things and putting screws in. He also loves to watch “Bob the Builder”… He’s going to be absolutely brilliant at DIY one day soon. He helped me; put up a curtain rail, take apart a huge table, put together a new table, take apart his old cot and put together his brand new big-boy’s bed. He learned about taking care of the small packages of screws, following instructions, being careful with sharp things and how two are better than one.

DIY: Means “Do It Yourself”… As is my weakness or strength, I followed a rabbit trail yesterday and again this morning. The rabbit trail I’m talking about is Bible Study. Yesterday I wrote about us not being able to pull-the-wool over God’s eyes and how “God cannot be mocked” from Galatians 6. Well, I kept on reading and this little verse jumped out at me. It’s a bit like Karamoko going through the toolbox and finding an interesting item that he’s never seen before. You know what question he always asks don’t you? “What’s this Papa?” next “What’s it for Papa?”… Then I’ll have to say, “Here Moko, let me show you”…

Here’s what the LORD gave me to share from His Toolbox with you today.

Galatians 6:14 (NIV) “May I never boast except in the cross of our Lord Jesus Christ, through which the world has been crucified to me, and I to the world.”

“May I never boast”: Truth is we all LOVE boasting. We long for others to know how brilliant we are, don’t we? Paul is not talking about the normal things in life here, he’s talking about boasting about how morally good he is or isn’t. The young Church in Galatia had been infested with Judaizers, Christians who wanted to keep the Jewish ceremonial laws and to belong to Christ at the same time. They were known for their boasting about it too and there was a real danger that some of the believers, who were young Christians, might be influenced to emulate their folly. That why Paul exclaimed, “Oh foolish Galatians, who has bewitched you?” Galatians 3:1.

NOTE: Judaizers is a term for Christians who insist that their co-religionists should follow the Law of Moses as well as being committed to Jesus Christ.

Their thinking was that because they kept the Jewish laws, they were like a kind of elevated Christian, a super Christian, better than ordinary Christians who merely trusted in the Grace, Mercy and Love of Jesus Christ. They boasted about the fact of how ‘religious’ they were and how observant of Jewish customs, traditions and laws.

You know my friends, religiosity counts for NOTHING in practical Christianity. It’s foolish to try and be ‘more’ religious. If you want to be a better Christian, and to be honest we all need to be better at following Jesus, don’t get more religious, get closer to Christ Himself.

That verse from; Galatians 6:14 (NIV) “May I never boast except in the cross of our Lord Jesus Christ, through which the world has been crucified to me, and I to the world.” reminded me of another similar teaching the LORD has already given to us.

WOWzer! Did you know that verse from the Lord’s toolbox? Now we can see what Paul was talking about can’t we? No wonder he declared: Galatians 6:14 (NIV) “May I never boast except in the cross of our Lord Jesus Christ, through which the world has been crucified to me, and I to the world.”

You see my friends, Paul had been very ‘religious’ and he now counts all his religious knowledge, experience and understanding as rubbish, dross, empty and foolishness in comparison with knowing Christ Jesus as His Lord. That’s why he only wanted to boast about the Cross of Jesus. Not only that but, he couldn’t boast about Himself or his religious observance, because it didn’t bring him closer to God, it pulled him further and further away from God. Why? Because religion is DIY faith in Jesus and His Cross means “He did it for me”… It’s not our goodness that we’re trusting in, but the goodness of Jesus Christ.

Here’s is Paul’s argument about this in full, this is what he said to the young Christians in Philippi who were being troubled by Judaizers too.

Philippians 3:1-11 (NIV)
1 Finally, my brothers, rejoice in the Lord! It is no trouble for me to write the same things to you again, and it is a safeguard for you.
2  Watch out for those dogs, those men who do evil, those mutilators of the flesh.
3  For it is we who are the circumcision, we who worship by the Spirit of God, who glory in Christ Jesus, and who put no confidence in the flesh— 4  though I myself have reasons for such confidence. If anyone else thinks he has reasons to put confidence in the flesh, I have more: 5  circumcised on the eighth day, of the people of Israel, of the tribe of Benjamin, a Hebrew of Hebrews; in regard to the law, a Pharisee; 6  as for zeal, persecuting the church; as for legalistic righteousness, faultless.
7  But whatever was to my profit I now consider loss for the sake of Christ.
8  What is more, I consider everything a loss compared to the surpassing greatness of knowing Christ Jesus my Lord, for whose sake I have lost all things. I consider them rubbish, that I may gain Christ 9  and be found in him, not having a righteousness of my own that comes from the law, but that which is through faith in Christ—the righteousness that comes from God and is by faith. 10  I want to know Christ and the power of his resurrection and the fellowship of sharing in his sufferings, becoming like him in his death, 11  and so, somehow, to attain to the resurrection from the dead.

Question: Why would anyone who’s been saved by God’s Grace, Mercy and Kindness go back to being religious? Answer: They wouldn’t, couldn’t, but only FALSE Converts would think there is anything in being ‘religious’. Once you KNOW Jesus personally, it’s like being an unfaithful husband or wife to try ‘religion’ again to make you righteous in God’s sight. It’s DIY religion.

Going back to Judaism or the Law of Moses is a DIFFERENT faith entirely from that of following the Lord Jesus Christ. It’s a DIY religion, you will be depending upon your own goodness not Christ’s. The reason it’s foolishness is because NO ONE, nobody will be declared righteous by observing the LAW. Romans 3:20. Because we all fall short, we all break God’s law and when we do, we’re contaminated with SIN.

So it’s no wonder Paul and the LORD got so upset when the Galatians, Philippians and many others began to practice ‘religiosity’ all over again.

Empty ritualistic religion will never save anyone, it’s a DIY faith.

Galatians 6:14 (NIV) “May I never boast except in the cross of our Lord Jesus Christ, through which the world has been crucified to me, and I to the world.”

Prayer: Heavenly Father, I can see that there are times when I think I’m better than others at keeping the faith, help me always only to boast in the Cross of Jesus, His goodness, His love, His strength and the fact that I’m only saved by Your Grace, kindness and goodness and that You’ve drawn me to Yourself so that I can know You, the true and living God. Forgive me Lord for the times when I’ve been tempted to DIY my faith instead of relying upon the Holy Spirit to keep me from falling. Amen! Thank you so much for practical D.I.Y for when we’re doing the ordinary things in life, we can learn so much about the Spiritual aspects of life with You. Amen!

Have an awesome weekend with Jesus my friends.