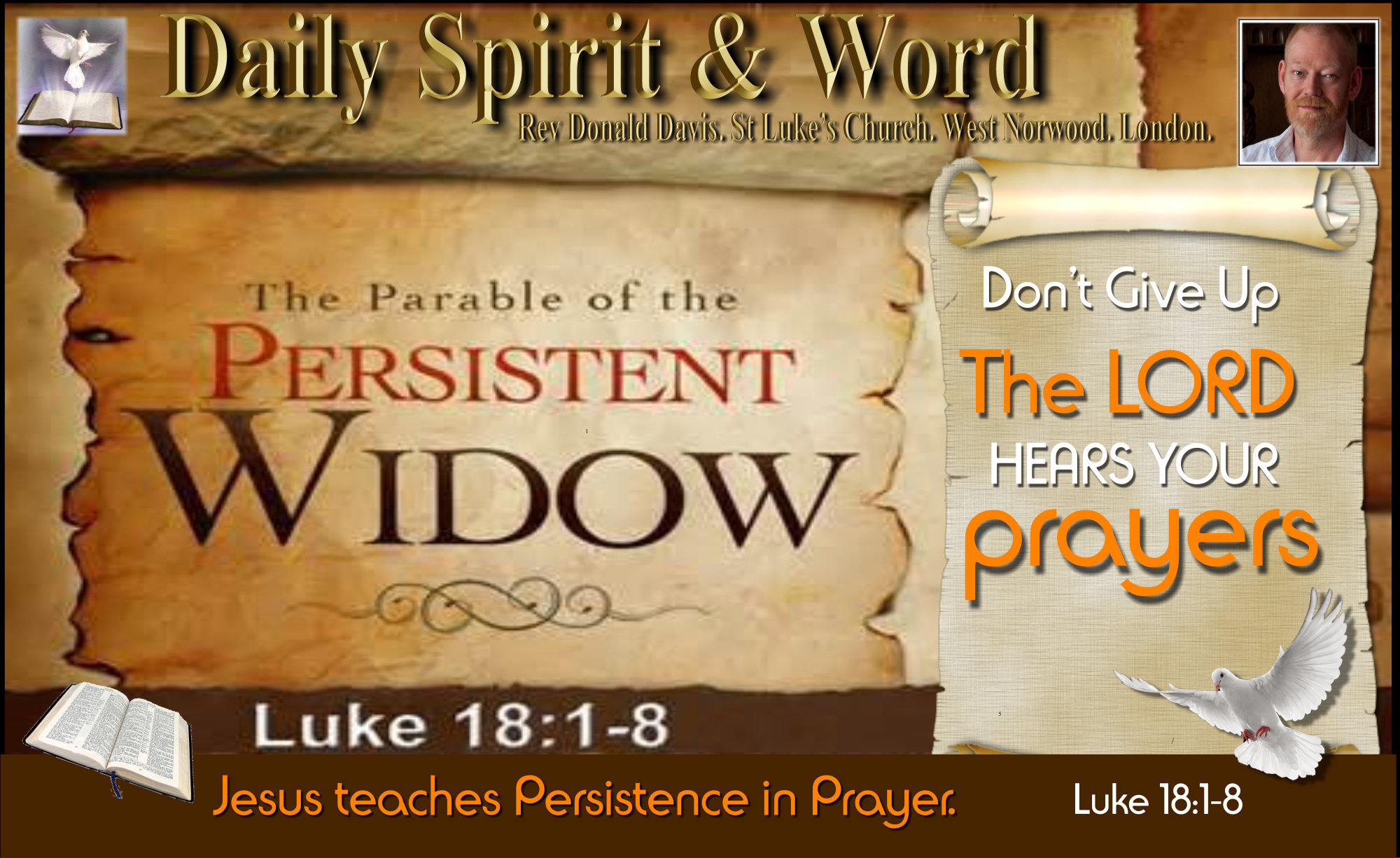 The Unjust Judge Gives IN to Persistence.

Good morning my friends, do you know how our Nation is the way it is today? It’s because minorities complain the most. It gets to the point that the one’s they are complaining to just cave-in and give them what they want. I’m sure they do it for good reasons, but one can’t help thinking they’re doing it just so the once complaining will go away and stop grumbling, nagging and hen-pecking . However, once they’ve gotten their way once, they’ll be encouraged and emboldened to come back and push for more.

“I hate to be a kicker,
I always long for peace,
But the wheel that does the squeaking,
Is the one that gets the grease.”

By Josh Billings: An American Humourist.

A ‘kicker’ in Josh’s day was someone who complained a lot.

The ‘wheel’ that does the ‘squeaking’ (i.e. the ones complaining the most) get what they’re asking for.

“The Wheel That Does The Squeaking Gets The Grease”

In the Bible there’s a story about a woman who wants justice, but the unjust judge ignores her please for help, however;

Luke 18:1-8 (NIV)
1 Then Jesus told his disciples a parable to show them that they should always pray and not give up.
2  He said: “In a certain town there was a judge who neither feared God nor cared about men.
3  And there was a widow in that town who kept coming to him with the plea, ‘Grant me justice against my adversary.’
4  “For some time he refused. But finally he said to himself, ‘Even though I don’t fear God or care about men,
5  yet because this widow keeps bothering me, I will see that she gets justice, so that she won’t eventually wear me out with her coming!’ “
6  And the Lord said, “Listen to what the unjust judge says.
7  And will not God bring about justice for his chosen ones, who cry out to him day and night? Will he keep putting them off?
8  I tell you, he will see that they get justice, and quickly. However, when the Son of Man comes, will he find faith on the earth?”

Jesus wanted to show us Father God’s attitude towards justice, i.e. How God wants to see that those He loves will get justice, and quickly. But, do you remember how long it took for Nelson Mandela? 25 YEARS in Prison on Robin Island. In the end, his patience, persistence and fortitude won-out and South Africa is now FREE from Apartheid.

Do you remember Jacob, how he wrestled with God all night? He wouldn’t let go of the LORD until he received his blessing.

Genesis 32:22-32 (NIV)
22  That night Jacob got up and took his two wives, his two maidservants and his eleven sons and crossed the ford of the Jabbok.
23  After he had sent them across the stream, he sent over all his possessions.
24  So Jacob was left alone, and a man wrestled with him till daybreak.
25  When the man saw that he could not overpower him, he touched the socket of Jacob’s hip so that his hip was wrenched as he wrestled with the man.
26  Then the man said, “Let me go, for it is daybreak.” But Jacob replied, “I will not let you go unless you bless me.”
27  The man asked him, “What is your name?” “Jacob,” he answered.
28  Then the man said, “Your name will no longer be Jacob, but Israel, because you have struggled with God and with men and have overcome.”
29  Jacob said, “Please tell me your name.” But he replied, “Why do you ask my name?” Then he blessed him there.
30  So Jacob called the place Peniel, saying, “It is because I saw God face to face, and yet my life was spared.”
31  The sun rose above him as he passed Peniel, and he was limping because of his hip.
32  Therefore to this day the Israelites do not eat the tendon attached to the socket of the hip, because the socket of Jacob’s hip was touched near the tendon.

We must bear in mind what was happening with Jacob when he wrestled with God: Jacob’s name means “Deciever”, but a more literal translation of his name is “Grabber” or “Grasper”… He came out of the womb grasping his twin brother Esau’s heel. Later on he deceived his father and grabbed, grasped his brother’s birthright blessing. He was fleeing his father-in-law Leban because he’d sneaked away in the night with all his possessions. Now he was headed home to meet-up with his brother who was hell-bent on revenge and had threatened Jacob’s life. So what did Jacob do? He’d sent everything he owned, including his wife and children and all his precious possessions ahead of him to pacify his brother’s furious anger. He was left with nothing but himself. God came to him and he wrestled with the Angelic presence of the Lord. Jacob grasped, grabbed hold all night until he got his blessing. He also got a name change “One who wrestles with God”.

Has there been a time in your life when you’ve prevailed in prayer, kept going, believing, having faith, not giving up; until the Lord blessed you? There was a lady I knew who couldn’t conceive for over eight years, she’d tried everything, but one day she came forward for prayer in church. A few weeks later her mother (who I didn’t know) came running up to me in the street and shouted, “You got my daughter pregnant”… First I thought about arguing, thinking in my head she was accusing me. How foolish, she was just overjoyed, because the LORD had answered her daughter’s prayer. She didn’t just have one baby, she had twins. The Lord gave her more than she bargained for. Sometimes we don’t get our answers for a long time, because we come to God last. We try everything else, but God. My friends, when you’ve got something going on in your life that you need help with, something your striving or struggling over, come to the Lord with it first.

We don’t deserve anything from God,

BUT: In His mercy and grace, He’ll give us what we need.

If it’s justice, as in the case of Nelson Mandela, God gives it quickly (though not our version of quickly).

If it’s seeking; God’s guidance, power, provision, protection, forgiveness, mercy or Justice, then know this my friends, God hears the prayers of those who pray in faith.

Jesus told that story of the Persistent Widow to show us how to KEEP coming to the LORD, so we wouldn’t give up on seeking God.

“The wheel that does the squeaking gets the grease.”

Have and awesome weekend, keep close to the Lord Jesus, be filled afresh with His Holy Spirit and don’t give up on prayer, because your answer might just be around the corner.

God HEARS you, so keep praying in faith, believing and trusting in Him who loves you.

P.S. Remember the great old hymn: “What a Friend we have in Jesus”?

What a friend we have in Jesus,
All our sins and griefs to bear,
What a privilege to carry,
Everything to Him in prayer.