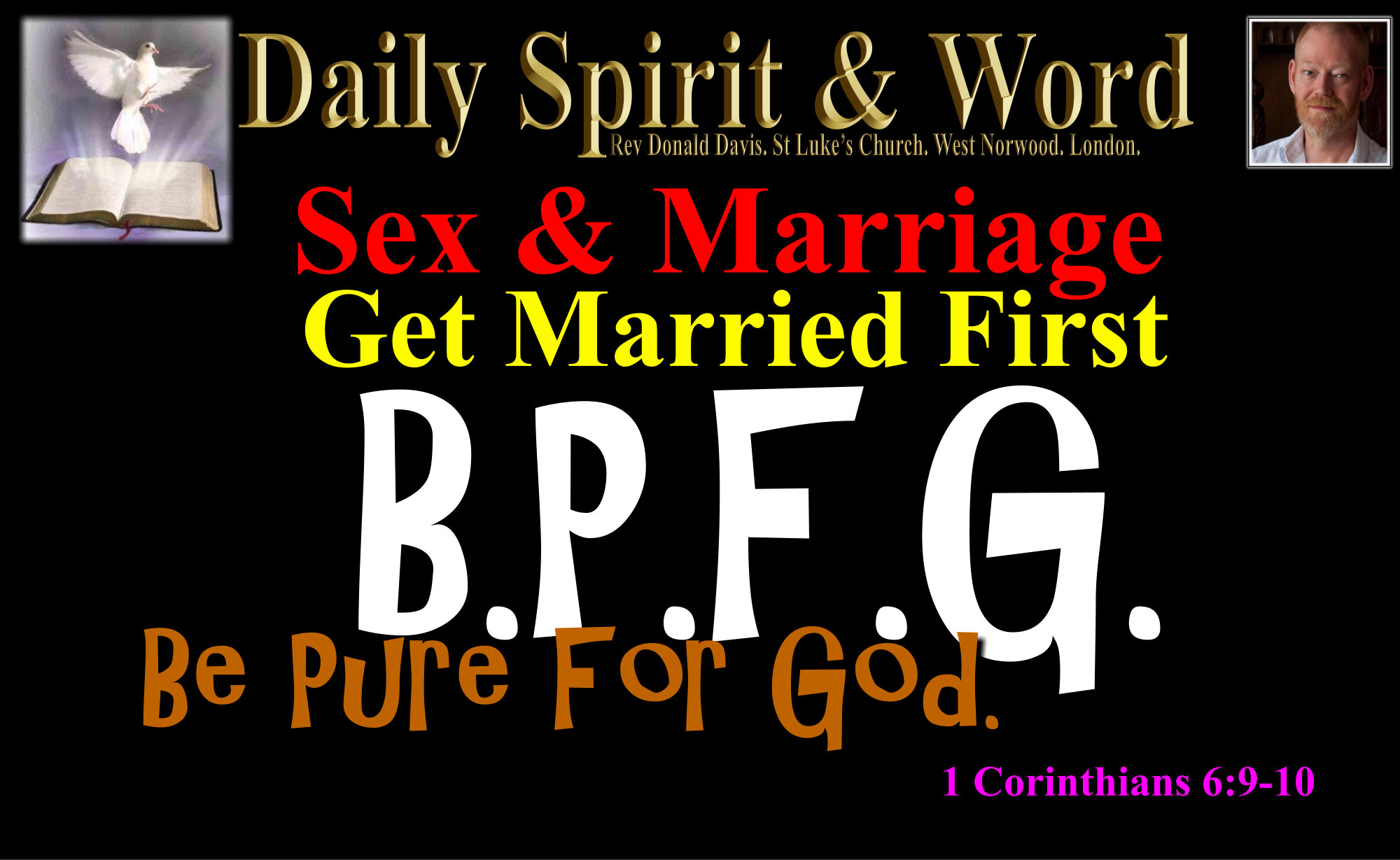 Good morning, it was a delight last night to prepare Sola (pronounced Shola) and Tosin for their forthcoming Wedding Blessing; they are getting married in California, but wanted their wedding to be blessed and to receive the prayer of fellow followers of the Lord Jesus Christ first. (Although my voice cracked a few times, between we managed to get through the vows and promises).

Marriage in God’s eyes, is between a man and a woman for the duration of their life on earth.

Genesis 2:24-25 (NKJV)
24  Therefore a man shall leave his father and mother and be joined to his wife, and they shall become one flesh.
25  And they were both naked, the man and his wife, and were not ashamed.

That is a huge commitment and undertaking, but that’s how the LORD views Marriage.

Marriege in God’s eyes, is the only place to be having sex.
God calls sex outside of marriage; fornication.

To Fornicate means: to have sex without being married.
We’ve invented a lot of common, vulgar words that mean the same thing;

There are probably many, many more words we’ve used in this world (I’ve omitted the obvious and most offensive ones), but they ALL mean the same thing when they are practised outside of Marriage: Fornicate.

Did you know that God warns us in the Bible, when we have sex outside of marriage then we become FORNICATORS?

Did you know that no FORNICATOR can enter into God’s Kingdom (Heaven).

How many times do we need to fornicate to become or to be known from God’s perspective as a FORNICATOR? Just once! It’s the same as murder, you only need to murder once to become a murderer for life.

Why does God forbid sexual activity outside of marriage?

Is it because God wants to ruin our fun and enjoyment in life? No my friends, it is because He knows what problems it will cause for us, for society and for the world that He made.

My heart bleeds for all the children in the world who’s mums and dads have split-up and gotten divorced, some because they just can’t get along together, others because of an unfaithful partner. Though there are sometime good reasons for getting a divorce, so many more marriages could be saved if we had a right perspective on SEX outside of marriage.

Because He LOVES us and wants what’s best for us.

God has a right to Command us not to fornicate too; why? because He made the Universe.

So the next time you hear a friend whispering they hope to “get laid this weekend”, share with them something of God’s Holy Standard and requirement: He said, “Don’t fornicate, don’t have sex outside of marriage, save yourself for your husband or wife”. Who knows, you just might save your friends from ruin. Faith comes by Hearing the WORD of God.

Fellow Christians, we need to STOP believing the World’s lies (world system under Satan’s rule), He tells us, “Do what makes you feel good and damn the consequences”. Well, if we do, it’s not the consequences that will be damned, but us.

Marriage is a gift from God, it is a delight to be with someone we love for the rest of our lives. Sex is also great when we’re married in God’s eyes: refrain from sexual activity outside of marriage. Decide in your heart today that you will be pure for God. (BPFG).

Be Pure For God

Have an awesome day with Jesus.