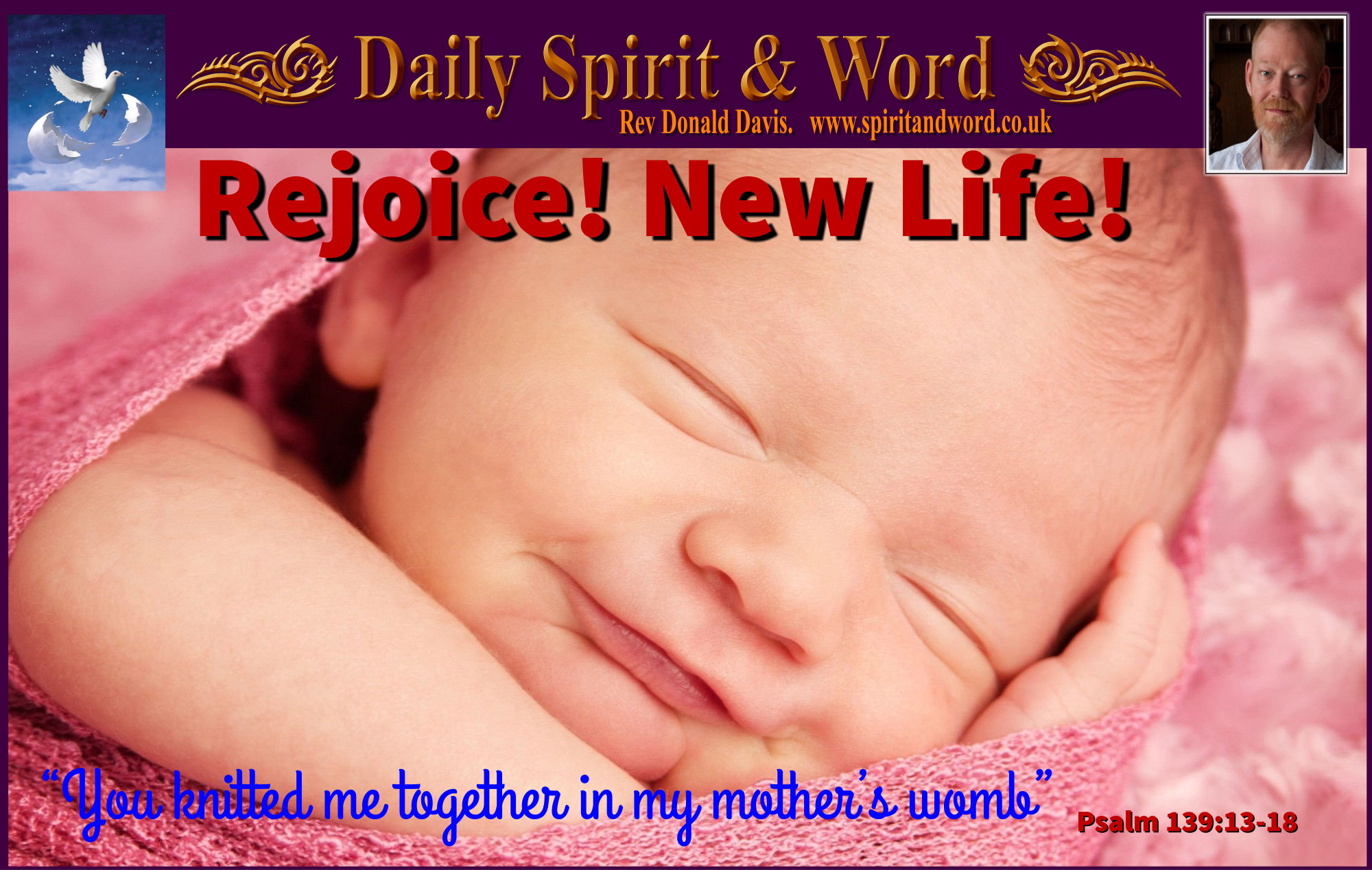 Good morning my friends, it’s always great when we hear news of a new born baby. The joy of the first cry, the first hug, the first photos. We share them with a frenzy of delight and with all of our friends of social media, we click like on Facebook or give them a heart on Instagram. Some people even want to share them with their own friends: it’s great news when a baby is born, but I want us this morning to take a step-backwards, to when the New Life begins in the womb, because it’s at that point we should also be just as delighted.

We always think that a baby gets into the womb by the action of the mother and father, well it does, but then another force takes over, that force is GOD. We think that it’s just natural processes at work, but it’s not just the natural processes alone, there is a Divine hand at work in the Creation of every single new life on earth.

Psalm 139:13-18 “For you created my inmost being; you knit me together in my mother’s womb.
14  I praise you because I am fearfully and wonderfully made; your works are wonderful, I know that full well.
15  My frame was not hidden from you when I was made in the secret place. When I was woven together in the depths of the earth, 16  your eyes saw my unformed body. All the days ordained for me were written in your book before one of them came to be.
17  How precious to me are your thoughts, O God! How vast is the sum of them!
18  Were I to count them, they would outnumber the grains of sand. When I awake, I am still with you.”

Recently, we had a precious and lovely couple of young Christians, who’d both just been baptised, who lost their baby in the womb, but this is the part of the Bible they chose for their daughter’s funeral. Why? Because they both KNEW that child was very special to the One they’d both come to know and love; the LORD God Almighty.

When I read that part of the Bible above I am often moved to tears, because it speaks of God’s plan in making me, but it also shouts aloud that the formation of every single human life is the intricate working of the Heavenly Father.

Deists believe that God Created the Universe, but once it was all set in place, spinning, He took a step back and just watches it perform, without any involvement, but here in Psalm 139:13-18 we see that God’s still directly involved in the Creation of every new life on earth.

Scientists may argue and say, “We can create new life in a test-tube and then implant it in the mother’s womb”: But the Bible would argue with that assumption; because it’s Jesus Christ who is the source of all life. Scientists need an egg and some sperm to work with; God doesn’t. He Created the Universe out of nothing, and is involved in the formation still of every New Life on earth. He didn’t take a back seat and let human beings take over the act of generation.

My friends, whenever you hear someone saying that abortion is OK or it’s a mother’s choice what she does with her own body, then we need to take a step-backwards from the emotional arguments and look at the reality, every child is a NEW LIFE Created by God, we don’t have the right to take any life, no matter how emotionally charged the argument. No matter how inconvenient that new life is, we’ve got a responsibility to nurture it and take care of it and rejoice in it’s formation, because God made it. God knitted it together; He made it in a very special and precious and individual way.

New Life doesn’t begin at birth, but in the womb, created and crafted with Divine hands, therefore, every single child belongs to God first, not the mother or father or grandmother or grandfather, it’s God’s New Life: So thank Him, rejoice in pregnancy and celebrate and share the good news, a baby is on it’s way, God’s working on it right now. Praise the Lord!

However, I can hear the modern world still arguing with those facts: “What about when a mother’s life is in danger? What about when someone gets pregnant as a result of rape? etc etc…. There are many famous people in the world today, who became world famous and were the result of rape: Some of them are brave enough to speak-out about it; Jack Nicholson is an example. However, it’s a horrendous thing to happen to a woman or girl. We know that from personal experience. However, it’s NOT the innocent baby’s fault and God’s still knitting that baby together in the womb; so rejoice in the New Life, the good that comes from the most terrible act imaginable. It would be understandable if the mother couldn’t contemplate raising that child, but that doesn’t excuse the murder of the innocent.

When a mother’s life is in danger is a much more difficult choice. We’ve all heard and shared those miracle stories, when doctors advised parents to have the baby aborted, but because of their faith, they’ve battled against the odds and the child has survived. However, there’s still the cases of real danger to a mother’s life if she carries the baby full-term. In those circumstances I would support the decision either way. If the mother chooses to sacrifice her own life so that they baby can be born or chooses to live at the expense of the life within her womb. It’s a hard one though, but it doesn’t mean we should automatically or normally rush into a decision and opt for abortion.

Thankfully most pregnancies are normal and those hard to make decisions are rare; but what about the arguments from the social perspective? Those times when a new baby is so inconvenient that it would not be welcomed by the mother or father? When she knows that she / they cannot afford another new mouth to feed or that she just wouldn’t be able to cope on her own? I would argue that it’s NOT their choice, but God’s. He’s given them the gift of a New Life: but society should automatically see that every NEW LIFE is cared for and nurtured and celebrated. Why? Because it’s NOT the babies fault! We’re given the gifts of NEW LIFE to rejoice and show our humanity and love.

Perhaps much more needs to be done, to show that we’ll help, we’ll all care for and support every single pregnant mother, no matter what her circumstances. Instead of threatening to remove welfare for more than two babies, we should be extending and expanding the care and provision for every new life that comes into the world from the hands of the Creator.

We just need to have a deeper level of TRUST (FAITH) that God knows what He’s doing when He knits a baby together in it’s mother’s womb.

Further, we must rebuke politicians and social commentators when they come down hard on people from challenging backgrounds who continue to get pregnant. Who do they think they are? They’ve all made mistakes, every single one of us has fallen short morally from God’s high standards or righteousness. We’ve ALL without exception broken His Commandments, so we cannot judge anyone else in any way. So when someone makes a mistake or falls short, we should be there for them, we should be showing them a better way, we should be supporting because it’s NOT the child’s fault.

So the next time you hear someone saying, “I’m Pregnant”: Then REJOICE, praise God, because He’s busy Creating and Knitting and Forming a NEW LIFE.

That’s my rant and rave over for today 🙂 Praise the LORD!

Praise HIM for His creative genius in forming every New Life that comes into this world today.

Oh and BTW: My daughter is pregnant with her fourth child 🙂 Praise the LORD!