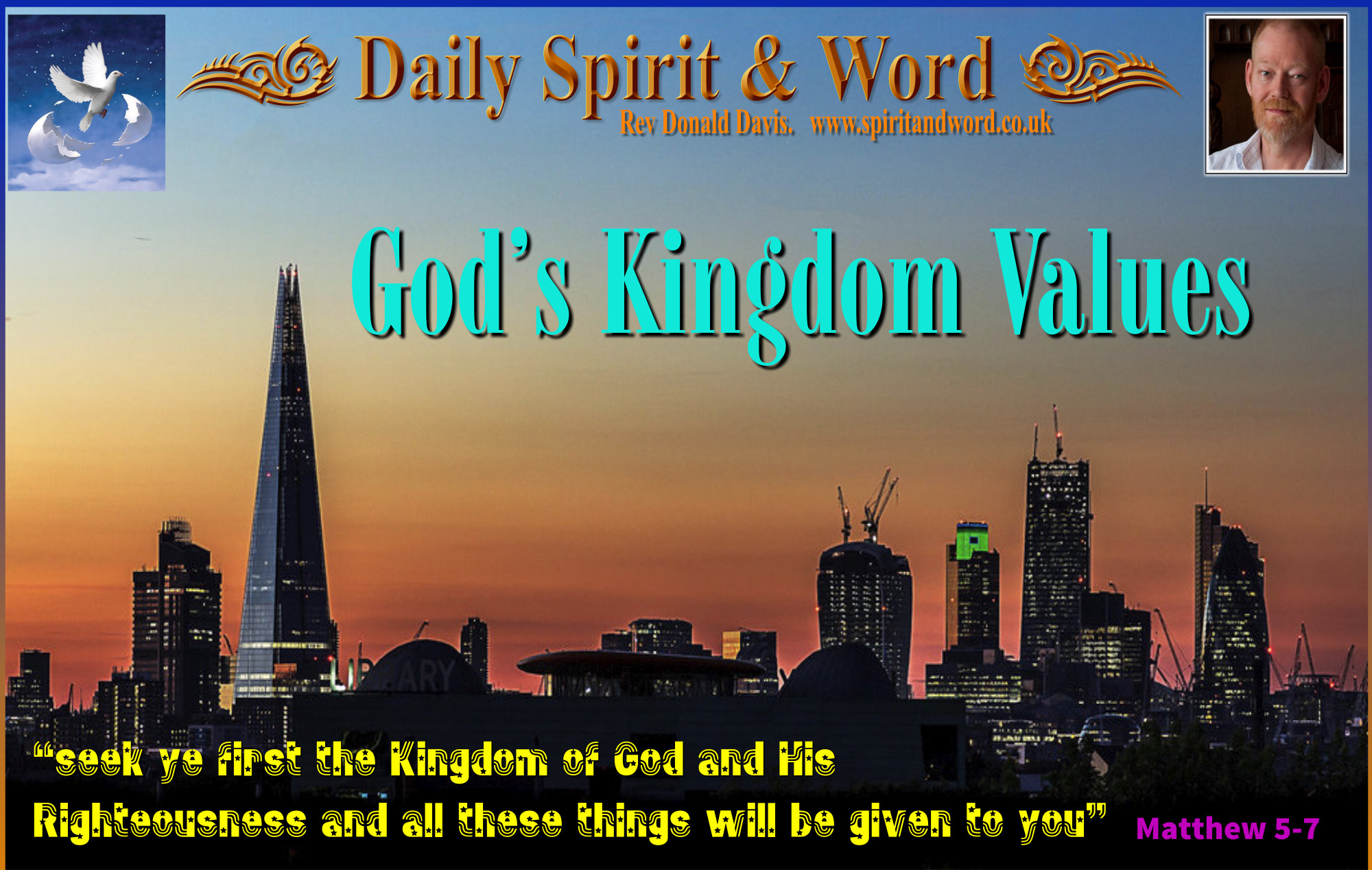 Good morning my friends. I’ve been thinking about the fact that Jesus promised He’d be coming back and the Angels of heaven also gave testimony that we’d one day see Him, but differently, when Jesus comes back next time it won’t be the same as before.

The first time Jesus came to visit the Earth, He came in the form of a man, he came to humble dwellings, he came as a baby, he came and learned at trade at his surrogate father’s side, then he lived a sinless life and suffered at the hands of those He had created.

The next time that Jesus comes back, it will be very different; He’s coming back in GLORY. That glory is not like earthly glory; what we on earth value and glory in is different from Heaven’s GLORY. We value, strength, wealth and the ability to rule and dominate others. Our world is choc-full of ideologies that dictate how we should be living, most of those ideologies and strategies are based upon worldly values that are very different from Heaven’s.

Capitalism: The Thriving of the Strongest.

People are busy: Trying with all their might to supply all that they need. Everybody’s time is spent in seeking things to make life better. We all get caught up in the quest for the unreachable dream of a care-free life of luxury.

But the reality is that it is the strongest and most powerful who get the cream and cheese, the best of fare and the gold and silver. The rich within the Capitalist system are getting richer every day, whilst the poor are obviously getting poorer by the minute. The majority, the weak, the feeble, the infirm, those less educated and the poor are left to struggle and scrape-by on the meagre droppings from the rich man’s tables. The poor are begrudgingly given a paltry wage, far below the levels that would allow them to thrive in their society. Whilst governments of all shades of political viewpoints do nothing to alleviate these conditions and everything to exacerbate them. And they dare to call this ‘capitalism’ a model for the world to follow. We live in a pseudo-democratic society, but it’s those who are ‘rich’ and ‘powerful’ who’ll decide who’s going to rule and reign. Political power is purchased, not truly democratically voted for. Just look that the whole campaign from the media and the political powers against Labour’s Jeremy Corbyn: A man who dares to demonstrate God’s values for the poor and lowest in society. That’s the failure of Capitalism and the false models of Democracy the majority of the world’s poor live under today. It’s NOT good, it’s NOT fair and it’s NOT going to last for very long, because, thankfully, Jesus has promised to come back in ALL HIS GLORY and change the way things are forever. But before Jesus comes back, we may have to go through a radical revolution in our thinking about our values.

You see my friends, Heaven’s values are very different from worldly values: Look at the Beatitudes in Matthew’s Gospel and you’ll glimpse a radical Divine paradigm. Jesus whole sermon on the mount is well worth pondering; it’s not the rich, strong or powerful who’ll be counted on the day of His appearing, but those who CARE for others and for HOLINESS of life.

Sorting Out Differences: AGREE with your Enemy / Adversary before you go to court. That’s so different from our modern world’s way or taking everyone to court to get a judgement and compensation.

Hating Others: We live in a world of extremes and we’re encouraged to HATE those who appear to be radicals: ISIS etc. Yes, their acts are barbaric and horrific. However, Jesus encourages us to LOVE our Enemies not to HATE them. Perhaps if we loved people a lot more than we do, we’d win them over to a new way of living in the world. Perhaps, they’d see the error of their ways and become just as horrified as the majority of right thinking people in the world are. LOVE not war will win them over. War has a tendency to harden your enemies resolve to win at all costs. Just look at Scotland’s football team, we’ve never won the world cup, but the more we’re defeated the harder we try.

Divorce: So many people, when they run into difficulty in their relationships or even before they’ve properly begun to discover what true love is, they resort to divorce and move onto another partner. God HATES divorce. Why? Because when He Created Marriage between a man and a woman, He intended that relationship to reflect His own DIVINE relationship, it’s never meant to be broken. We’re meant to work through our difficulties and hardships.

Adultery: We normally think of adultery as being unfaithful with another person whilst being married. However Jesus reveals the true meaning of adultery. If we look upon another person with lust in our heart (lust is a strong desire to be with and have another person), it’s the same kind of thing as coveting. Though shalt not covet: desire something that belongs to someone else. We may never consider actually committing adultery, but Jesus shows us that even thinking about doing it is the same as actually doing it in God’s eyes. Who can say honestly that they’ve never been guilty of that?

The whole Sermon on the Mount is found in Matthew’s Gospel chapters 5-7, you can read it in about 10-15 mins slowly. I’d encourage everyone to read it through at least ten times to get a good handle upon Jesus message. Jesus touches on EVERY ASPECT OF LIFE in that Sermon. Every time I read it through, He highlights an aspect of my life that needs some Divine work, His forgiveness, His grace and His power in my heart.

What I’m endeavouring to demonstrate is that Heaven’s value system is radically different from the world in which we all live and if we were take this message to heart today, allow it to penetrate so that we want to live according to it’s teaching, to prepare ourselves for Christ’s GLORIOUS return, we’re going to be making ourselves ready to be transformed by God’s Holy Spirit, when we’re being transformed and begin living Christ’s ways in the world today, then we’re also going to radically transform the society in which we live. You will be SALT and LIGHT: You’ll be generous with the poor, kind to your neighbours, faithful to your wife and husband, peaceful when persecuted, generous to your enemies, loving to those who hate you, holy in the way you live before God. You’ll be living for Him instead of for yourself. You’ll also be storing up treasures in Heaven instead of upon this earth. That’s Heaven’s Value System and it is totally and radically different from society today.

Instead of seeking the vaporous trails of wealth and riches, look instead at what the LORD encourages us to pursue in His greatest teaching in the Sermon on the Mount: Seek FIRST THE KINGDOM, when we do that, everything else falls into place.

Why are we NOT to live like the rest of the world? Because God cares much more than we think He does. And Because God KNOWS what we need. He made the whole universe and each and every one of us too, so He knows how to take care of us. Seek HIS KINGDOM  and HIS VALUES (Righteousness) and then He’ll supply everything else that we need in abundance. Just take look at how He cares for the butterfly and how it’s dressed.

God Cares Much More Than We Think He Does

To live for Jesus and according to His teaching is to be living His Kingdom lifestyle. What Jesus Sermon on the mount reveals is that we need Him in order to live in the world today. Yes, He’s coming back soon and it’s going to be such a blessed glorious coming, but He’s also given us everything we need NOW to be able to live according to His ways. Seek the fullness of the Holy Spirit and turn to God in repentance and faith in Jesus Christ. He’ll enable you to live the abundant and joy-filled life.

With Heaven’s Value System in Your Heart: Have an AWESOME day with Jesus.