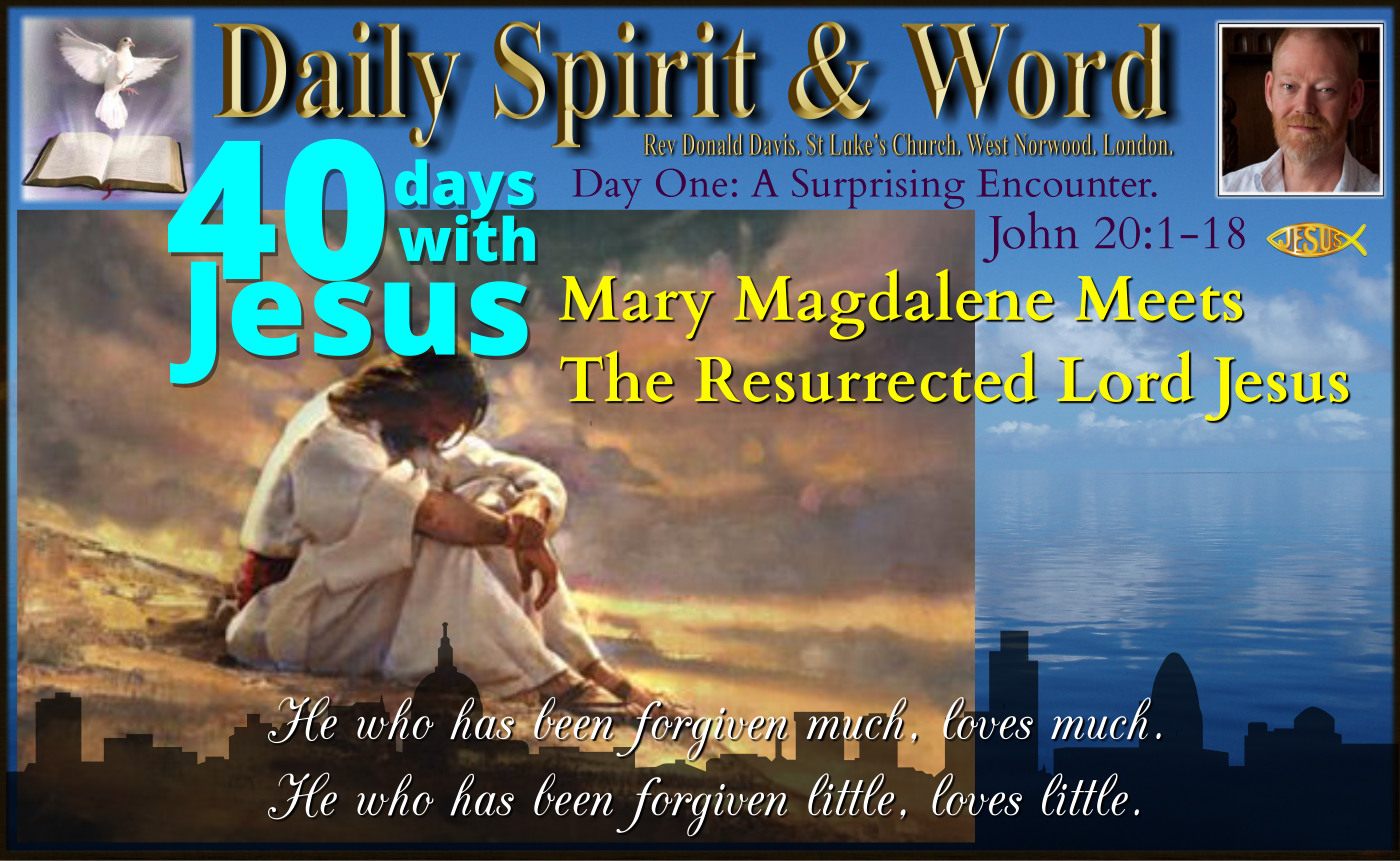 Good morning my friends, I had quite a frustrating day yesterday, I tried to post first thing in the morning as normal, but discovered to my horror that Virgin Media still wasn’t working. I contacted them, and got the same message but with different times for it to be fixed. Here’s the message, “There is a problem in your area with Television and Internet, we have identified the problem, an engineer is on the way, the problem should be fixed by 1.00am, …” Then after 1.00am came and went “9.00am”, then “4.09pm”, then “2.06am”, then “16.24” WOWzer, funny how they can be so specific about the times, each time, when the Engineer is still on the way 🙂 Made me laugh and a bit annoyed at the same time. However, it’s NOW up and running again after 48 hours without internet or TV, and I still don’t know why or what the problem was.

Yesterday, I was going to introduce you to 40 Days With Jesus, a new course we’re running in church for those who, after Easter, were interested in getting to know more about the Christian faith and to help those who’ve yet to discover Fellowship Groups to be part of one for a very short time, and also to prepare those who want to be Baptised this year. It might be quite a large group 🙂 I’m hoping!. The 40 Days with Jesus is all about those people in the Bible who encountered the risen (resurrected) Lord Jesus and what impact that had for their lives and for the community of believers in the first century of the Christian faith. (I’m posting the introduction on the Website). The little booklet we’re using is very cheap and readily available for download, with great questions and also a video to watch every week. “40 Days With Jesus, by Dave Smith”. Also available on Kindle.

Over the years I’ve had quite a few memorable and surprising encounters with people. I’ve met the Queen (Queen Elizabeth ll), I’ve met the Queen Mother, Rod Stewart (Pop Singer), Rod Stewart’s Girlfriend, Rick Warren, Billy Graham, Freddie Starr (Funny Comedian). In 1988 I met my soon to be wife, that was a meeting that has changed my life and continues to be a real blessing, but probably my most surprising and life transforming encounter I’ve ever had was when I met the Lord Jesus Christ. I didn’t expect Jesus to be real or alive or knowable or that He’s want anything to do with me. I thought people who were religious were born that way, and I most definitely wasn’t one of them (I’m still not). But when my wife wanted to get our little baby girl, Abigail, baptised we started attending a little church in Plymouth, called St Budeaux Parish Church. In those days 1984, it was packed full of people, young families and lots of teenagers, we felt at home quite quickly, but I didn’t want to keep going or to become like the people there, I just wanted the baptism done then I’d be on my way. However, the minister at the time asked us to attend for three months, he visit us at home and then after preparation he’d baptise the baby. We agreed, then over the next few weeks I discovered Jesus was real. I knew from observing the people in the church, they had something that I didn’t have, I could just tell, and though at that time I didn’t want it, I wondered what it was. Each week the message seemed to be about my life, my questions, my fears, my sins, my everything. It was as if the minister could read my mind. Slowly but surely I began to know that Jesus was real, but I didn’t want to become a Christian. The Minister asked me every week on the way out of Church, “Are you a Christian yet?” I said, “No!” every time. Then one week he asked me something different, he said, “Donald, you do know that Jesus wants you to be a Christian, don’t you?” I walked away saying, “Yea, Yea sure he does”… But it was that question and everyting else playing on my mind, “If Jesus wants me, what does He want me for?”… My friends, Jesus speaks in so many amazing and wonderful ways. I was beginning to read about Jesus in the Bible by then and it jumped out at me: God answered a question and it was amazing, embarrassing and surprising all at the same time. I know Jesus was definitely alive, but I wasn’t ready yet to become a Christian. It took a few more weeks of attending church, joining a Bible Study and the Lord Jesus speaking, challenging and opening me up, until I was ready to repent of my sins and receive Him as my Saviour. However, I knew long before I finally submitted that Jesus was most definitely ALIVE.

We’ll be taking a look at Mary’s encounter with Jesus this week, but today I want us to consider that Mary, a woman, was the first follower of Jesus to actually meet the risen Lord. This is a surprising encounter in many ways. You’ll notice as you read through John 20:1-18 that the disciples; Peter and John (the closest friends of Jesus whilst he was on earth, the one’s you’d probably expect to see Him first) they ran to the tomb, but they didn’t see the risen Christ. All they saw was an empty tomb and the linen cloths that Jesus dead body had been wrapped in when it was taken down from the cross. No my friends, it was Mary Magdalene who lingered at the tomb, with tears running down her face and kept on asking the question, “What have they done with the body of my Lord?” She was looking for Jesus dead body, but Mary was the first person to discover that He was actually raised from the dead. Mary Magdalene, an prostitute who’d been delivered from seven demons was the first person to encounter the resurrected Jesus. Why?

Dave Smith doesn’t touch on this in the booklet, but I’ve been thinking about it. Mary had been forgiven and delivered from evil. Remember what Jesus said about a person who knows how much they’ve been forgiven and how grateful they’d be? Luke 7:36-50 Jesus anointed by a sinful woman. Jesus said about her Luke 7:44-47 “Then he turned towards the woman and said to Simon, “Do you see this woman? I came into your house. You did not give me any water for my feet, but she wet my feet with her tears and wiped them with her hair. 45  You did not give me a kiss, but this woman, from the time I entered, has not stopped kissing my feet. 46  You did not put oil on my head, but she has poured perfume on my feet. 47  Therefore, I tell you, her many sins have been forgiven—for she loved much. But he who has been forgiven little loves little.”

Do you see it my friends, Mary Magdalene had been forgiven so much, we have too, but we don’t often realise the seriousness of our sins, that each sin we commit is enough on it’s own to keep us out of heaven forever, but Mary had been a harlot a very obviously sinful person and she had been delivered from seven demons too. My friends, when you realise just how many sins you’ve been forgiven for, you’d be as devoted to the Lord as Mary Magdalene was, you’d be at the tomb lingering, weeping and crying and determined as she was, to find the body of your Lord and do what needed to be done. She got far more than she bargained for that day, Mary’s surprising encounter was with the Resurrected Lord Jesus Christ. Mary was the first to meet with the risen Lord Jesus.

Lord Jesus, I realise that by asking about the implications of the resurrection for my life, I must be prepared to hear the answers. I cannot be the same and I don’t want to be. I long to know You and meet with You. Take me on a journey over the next 40 days. Help me to be brave enough to respond to the things that you are whispering to me. Breathe Your life into any part of me that is currently lifeless or lacking in energy and spirit. Then move me forward by the power of Your Spirit in ways that only You can. I pray this in faith. Amen.

God bless and I’ll hopefully be back again tomorrow, God willing and Virgin Media keeps up and running 🙂

I’m praying for you all today that you’ll actually meet the resurrected LORD Jesus Christ in a Surprising Encounter of your own. Amen.

1 Early on the first day of the week, while it was still dark, Mary Magdalene went to the tomb and saw that the stone had been removed from the entrance.
2  So she came running to Simon Peter and the other disciple, the one Jesus loved, and said, “They have taken the Lord out of the tomb, and we don’t know where they have put him!”
3  So Peter and the other disciple started for the tomb.
4  Both were running, but the other disciple outran Peter and reached the tomb first.
5  He bent over and looked in at the strips of linen lying there but did not go in.
6  Then Simon Peter, who was behind him, arrived and went into the tomb. He saw the strips of linen lying there,
7  as well as the burial cloth that had been around Jesus’ head. The cloth was folded up by itself, separate from the linen.
8  Finally the other disciple, who had reached the tomb first, also went inside. He saw and believed.
9  (They still did not understand from Scripture that Jesus had to rise from the dead.)
10 Then the disciples went back to their homes,
11  but Mary stood outside the tomb crying. As she wept, she bent over to look into the tomb
12  and saw two angels in white, seated where Jesus’ body had been, one at the head and the other at the foot.
13  They asked her, “Woman, why are you crying?” “They have taken my Lord away,” she said, “and I don’t know where they have put him.”
14  At this, she turned round and saw Jesus standing there, but she did not realise that it was Jesus.
15  “Woman,” he said, “why are you crying? Who is it you are looking for?” Thinking he was the gardener, she said, “Sir, if you have carried him away, tell me where you have put him, and I will get him.”
16  Jesus said to her, “Mary.” She turned towards him and cried out in Aramaic, “Rabboni!” (which means Teacher).
17  Jesus said, “Do not hold on to me, for I have not yet returned to the Father. Go instead to my brothers and tell them, ‘I am returning to my Father and your Father, to my God and your God.’ “
18  Mary Magdalene went to the disciples with the news: “I have seen the Lord!” And she told them that he had said these things to her.

Resources: Scroll down for the Video.

I would really encourage you to get hold of the little study booklet for this whole course. We’ve got some in Church for anyone who comes along tonight. If there is any left we’ll make them available to the whole church. But you can get them easily here or at Amazon even cheaper. And you can get a Kindle version to read on your devices and phones. The Kindle version on Amazon is just £5.60.

A Surprising Encounter: Day 1 of 40 Days With Jesus.