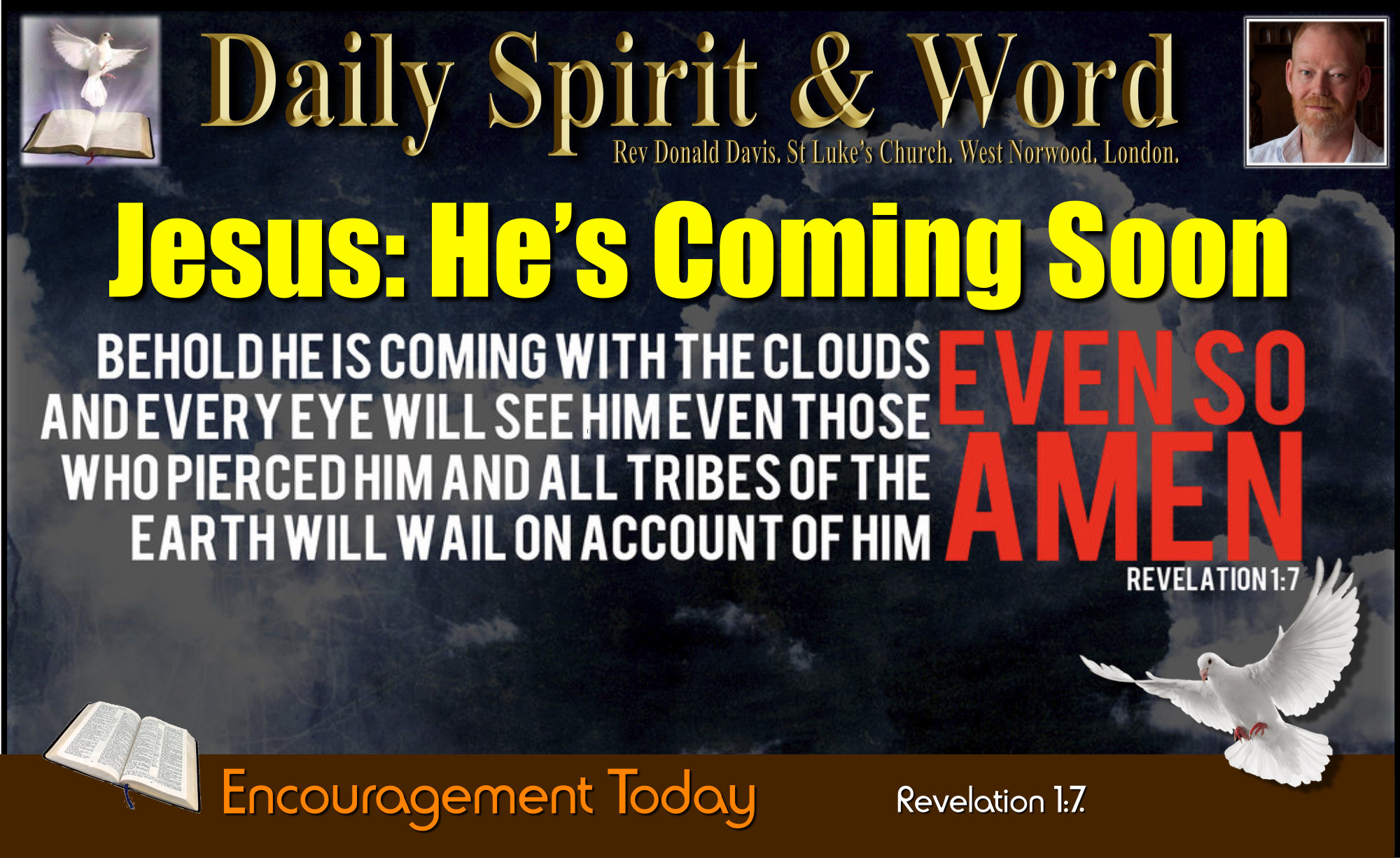 After I came to know the LORD in 1984, there was a little praise song my church sang: “Soon and very soon, we are going to see the LORD”. My understanding of God’s Word was limited back then, so I was half expecting Jesus to come back during the week. It radically changed the way that I was living, because I wanted to be ready for Jesus. As the years have gone on, I look back and wonder, “Should I have been continuing with that same sense of expectation all along?” Of course the answer is “YES” for we don’t know the day or the hour. Then there’s the great question Jesus asks, “Will the Son of Man find faith on earth when He returns?”

Revelation 1:7 (NIV)
7  Look, he is coming with the clouds, and every eye will see him, even those who pierced him; and all the peoples of the earth will mourn because of him. So shall it be! Amen.

Revelation is written to both encourage followers of Jesus and to warn those who’re slipping away from a genuine walk with Him. It’s also written and available to the enemies of Jesus as a stern and stark warning; “He’s Coming BACK AGAIN SOON.”

EVERY EYE SHALL SEE HIM:

This is a wonderful encouragement for the believers in the major towns mentioned in Revelation; the Seven Churches in Asia Minor, but also for you and me today. We’re going to see the LORD! At that time it was dangerous to be a believer in Jesus. John was exiled to Patmos, some of the other believers were being killed and put to death in horrific ways. But John wanted to encourage them in the walk with Christ and their commitment to the end.

Who’s going to see Jesus? “Every eye shall see Him”: Believers and non-believers alike. Even those who pierced Him: The Jews and Romans who put Christ to death will see Him. However it’s also those who are opposed to Christianity in every generation, it’s as if they are the ones who are piercing Him all over again. Remember what Jesus said to Saul (Paul) when He appeared to him on the road to Damascus:

Acts 9:3-5 (NIV)
3  As he neared Damascus on his journey, suddenly a light from heaven flashed around him.
4  He fell to the ground and heard a voice say to him, “Saul, Saul, why do you persecute me?”
5  “Who are you, Lord?” Saul asked. “I am Jesus, whom you are persecuting,” he replied.

“Why do you persecute me?” Paul was involved in killing Christians and hunting them down. There have been thousands who’ve been persecuted for their faith in Jesus. This text in Revelation today shows us, that one day they will mourn.

What will they do when they see Jesus returning on the clouds? They’ll “MOURN” All peoples on the Earth who don’t know Jesus Christ as LORD and Saviour or who’ve rejected the Gospel, will be grieving, mourning and wailing.

Do you know that there are TWO references in this one verse to Old Testament Prophesy. In his old age John, the Apostle and dearly loved Disciple of Jesus, was full of the Holy Spirit and steeped in the Old Testament Scriptures. He’d been given insight into a fuller understanding of their meaning, and by the Holy Spirit was able to APPLY those Scriptures to his own “Here and now”…

Daniel 7:13-14 (NIV)
13  “In my vision at night I looked, and there before me was one like a son of man, coming with the clouds of heaven. He approached the Ancient of Days and was led into his presence.
14  He was given authority, glory and sovereign power; all peoples, nations and men of every language worshipped him. His dominion is an everlasting dominion that will not pass away, and his kingdom is one that will never be destroyed.”

It is from that passage in Daniel there emerges the recurring picture of the Son of Man coming on the clouds (Mark 13:26; Mark 14:62; Matthew 24:30; Matthew 26:64). These are wonderful encouraging messages for every Christian, the unchanging truth that the day will come when Jesus Christ will be Lord of all and every eye shall see Him. It is that kind of hope that can keep you going through the toughest of trials on this earth. Imagine how John’s message would have been received at a time of great persecution of Christians. How much more is it and encouragement for us today as we see our own world rushing headlong into oblivion?

The Second OT reference is: “Mourning for the one they have pierced”

Zechariah 12:10 (NIV)
“And I will pour out on the house of David and the inhabitants of Jerusalem a spirit of grace and supplication. They will look on me, the one they have pierced, and they will mourn for him as one mourns for an only child, and grieve bitterly for him as one grieves for a firstborn son.”

One Day SOON: We are going to see the LORD! Hallelujah. Praise the Lord!

But on that day, every enemy of Christ; every Atheist, every false religions, every wayward non-religious person and every bitter-back-slider, even the hypocrite; will MOURN: Because they’ll suddenly discover how wrong they’ve been; they’ll mourn as one does the death of an infant as Zachariah tells us, that’s a terrible kind of grieving indeed.

Read this Revelation verse again and praise the Lord, because you know HIM who’s coming back soon.

Revelation 1:7 (NIV)
7  Look, he is coming with the clouds, and every eye will see him, even those who pierced him; and all the peoples of the earth will mourn because of him. So shall it be! Amen.

No matter what your circumstances are today, this is encouragement to LIVE your life every day with the expectant hope He’s coming soon. Life will be much better for you if you do.

Sing; “Soon and very soon, we are going to see the Lord”.

Praying that you’ll have an awesome week, full of exciting adventures in the Holy Spirit with Jesus your Lord. Amen.