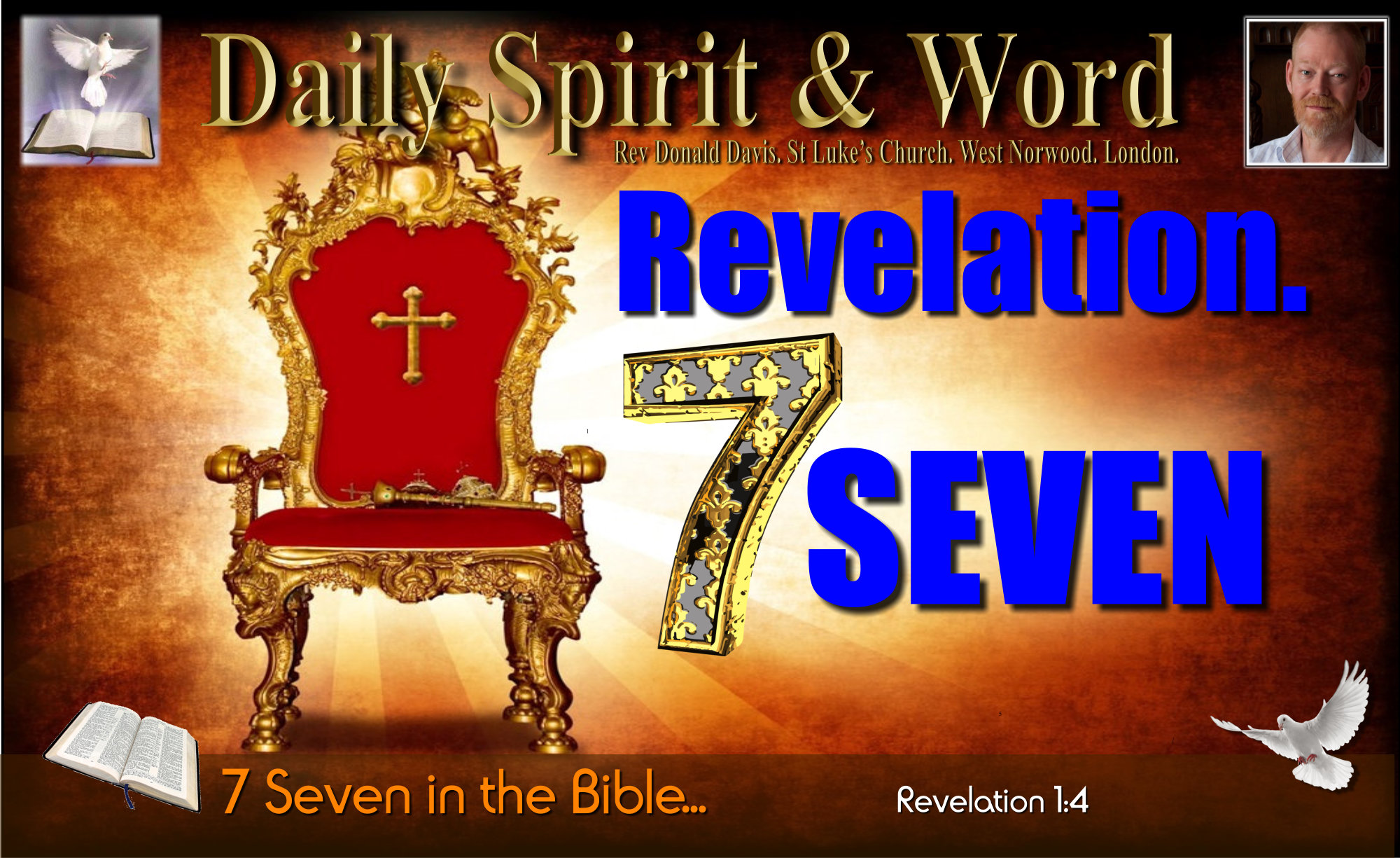 Good morning my friends, I’m one of SEVEN children. Praise the LORD! I’m back with the book of Revelation again this morning and what jumps right out at me is John’s given a message to deliver to the SEVEN churches in Asia Minor (Modern Turkey). Why only SEVEN?

Revelation 1:4 (NIV) “John, To the seven churches in the province of Asia: Grace and peace to you from him who is, and who was, and who is to come, and from the seven spirits before his throne, …”

We’ve all heard of the superstitious applications of the number seven: Casinos and Gambling Dens have neon lights around the number seven. Some of them are actually called; “Lucky Seven” or “Lucky Seven Bingo”… However, there is a much more signigicant and important aspect of SEVEN for Believers in the Lord Jesus Christ to consider or know about.

God Created everything, but on the SEVENTH Day He rested from His labours. God’s not stopped doing good, but doing good is not a labour to the Lord, it’s a delight. Good deeds are not labour to the Lord Jesus; hence He healed many people on the Sabbath Day. However, SEVENTH Day is significant because it marks the day that the LORD had finished, completed His work of Creating the Universe and everything it contains. The Earth and all it’s many kinds life forms. We can see God’s Divine fingerprints all over His Creation, that’s why men will be without excuse on the Day of Judgement: We can know that there is a God who Created everything, by taking a close look at His Creation. When God finished Creating everything He looked and saw that it was “Good”, but when He finished making mankind in His image he said something different, He said, “It’s very good”. Awesome! Seven is God’s Completeness and Perfection.

But There’s Even More to SEVEN:

Seven also speaks to Believers in the Lord Jesus today about God’s completeness and His perfection.

In a particular way, seven has to do with God’s covenant and relationship with His Chosen People Israel.

For instance, the Sabbath (Day of Rest and Devotion), circumcision, and worship are all hinged around the seventh day, the seventh year and multiples of seven; Sabbatical Years.

As you go through the Bible, The Word of God, you’ll notice the SEVEN is prominent:

A Bit of Trivia: Do you know how many times the NUMBER SEVEN is used in God’s Word? Answer: 735 times.

However, If we include with this count how many times ‘sevenfold’ is used (6) and ‘seventh’ is used (119) then you’ll note that God’s Word used the SEVEN a total of 860 times.

Note that in the Book of Revelation the number seven cannot be ignored or considered accidental. We are going to see many more 7’s in Revelation. Seven is the key number of this book of Revelation: It is mentioned 54 times in the book of Revelation. It measures God’s Completeness and Signifies something significant or important has happened, is about to happen or will happen in the future.

Whenever you see SEVEN in the Bible it’s a reminder to every Believer in Jesus Christ that we’re serving a PERFECT God who knows how to finish things (Completeness) and is in control of time and the Universe (Perfect).

In Asia Minor there were more than Seven Churches: So why did John only get Revelation for them? These Seven Churches are important for every believer today, God is watching everything that we are doing, when we see what He wrote to those churches, we can ask ourselves this question “What would God say about me or my church today?”. “What would the LORD say about my walk with Him, my faith, my religion, my heart condition?”

Revelation 1:4 (NIV) “John, To the seven churches in the province of Asia: Grace and peace to you from him who is, and who was, and who is to come, and from the seven spirits before his throne, …”

NOTE: John didn’t give himself a title: He didn’t say “The Apostle John” or “The Disciple who was closest to the LORD” The people who received this Book of Revelation whould have known very well who John was.

SEVEN MARKS: Completeness or Perfection: Him who is, Him who was, Him who is to come: Jesus Christ.

Don’t go getting all superstitious about the NUMBER SEVEN, because when you trust in your “Lucky” number you won’t be trusting in the LORD. However, when you see it in the Bible it brings great comfort to followers of the Lord.

There are other numbers we could focus upon:

My own mother was a gambler, she loved Bingo and betting on the horses. She had “lucky” charms, lucky things, but none of them worked. All she got was poorer as a result of trusting in “LUCK”. For most of her life she was Superstitious; Perhaps that why she had seven children 🙂 Thankfully, before she died, she finally trusted in the LORD. Don’t trust in LUCK or Lucky 7: Trust in Jesus Christ who knows everything.

So don’t go getting superstitious about numbers. Trust ONLY in Jesus Christ. However, do NOTE that the LORD has used numbers in very significant ways in His Word to give us even greater revelation of who He is and what He’s like. It’s amazing when you go through the Bible and NOTE the number SEVEN. It gives you a great sense of peace and of trust in just how much God knows about everything, that He’s in ultimate control and can deal with whatever little problems we may have in life. We really do serve an AWESOME God. Praise Him!

Have an awesome weekend my friends, don’t forget to gather together to worship the LORD on the Seventh Day. For Christians that’s Sunday 🙂

A Great Link for further study of the Number SEVEN