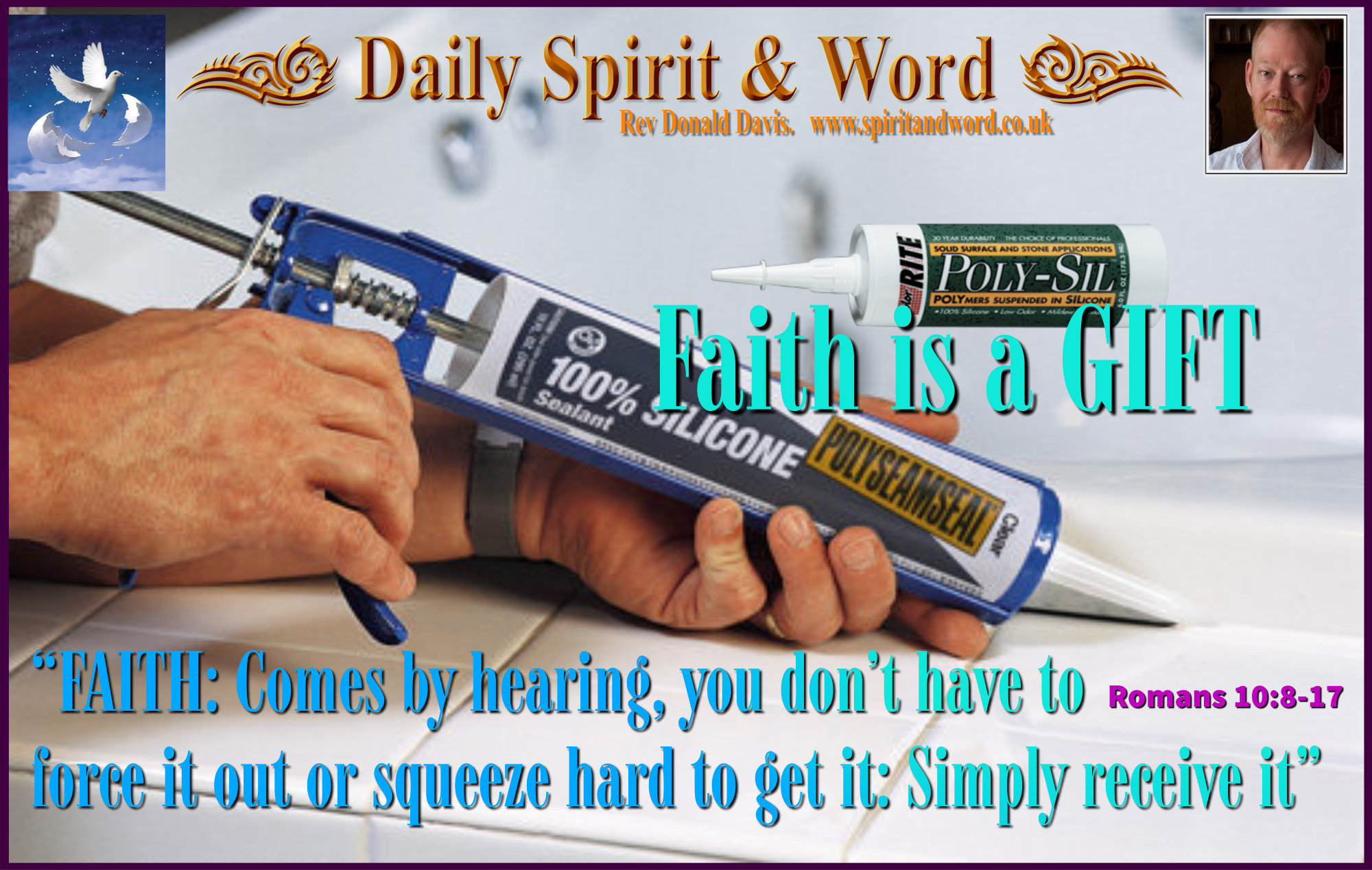 Good morning my friends, I’m still enjoying holiday time. Recently we’ve been having family staying and it’s been really great catching up on our daughter’s life. Hearing her joys and hardships and experiences; stories that without meeting up would remain untold or forgotten. It’s amazing how many things don’t get said often enough.

Faith doesn’t come from inside the individual: It is first generated by God.

We often imagine that faith comes from our own efforts:

I recently bought some silicone sealant: It comes in great long tubes and it’s really difficult to get them flowing at first, requiring great effort to squeeze out even a tiny dribble of the thick-creamy-goo from the nozzle. However, once it’s flowing it’s quite easy to keep it going, getting it to go where you want it to go is another thing though. I’ve watched trained craftsmen and they’re just dazzling they way they make straight lines with silicone; mines are more often than not; wobbly, lumpy and with peaks resembling a lemon meringue pie 🙂

Some people think that faith needs to be squeezed out like that, but it’s not by effort or force that faith comes.

Listen to how the Bible tells us that faith comes, and from whom it comes, because once you know this you’ll be less likely to be frustrated by your own and other people’s lack of faith. Also, If you want other people to come to a living faith in Jesus, then you’ll know how to achieve it, because you’ll be freed from many false expectations and you’ll also be able to set other people free too.

Ephesians 2:8 (NLT) “God saved you by his grace when you believed. And you can’t take credit for this; it is a gift from God.”

It’s not by our own effort of good works or anything else we do, it’s a GIFT from God.

And it comes into a person’s life by hearing God’s Word.

Romans 10:17 “Consequently, faith comes from hearing the message (the good news about Jesus Christ), and the message is heard through the word of Christ.”

The ‘message’: (Read Romans 10:8-17 in Context below) It’s the whole Gospel of Jesus Christ: How all have sinned against God, what it means that we’ve sinned, how we have sinned, the consequences of sin, what happens to sinners if they were to die in their sin, God’s heart for sinners and how He demonstrated His love by sending His Son Jesus to save sinners from the wrath to come, then what it means to trust in Jesus by repenting and receiving Him as Lord: That’s the MESSAGE: People receive the gift of faith when they hear that message, it’s a gift that comes from God.

Sometimes as you share the ‘message’ of Christ, you’ll actually see faith coming upon a person, it changes them physically. Once a person has faith enough to believe, then all that’s needed is for them to exercise that saving faith in the Lord Jesus Christ Rom 10:8-17.

The more you exercise your God given faith, the more it will grow and the easier those mountains will be removed.

Matthew 17:20-21  “And Jesus said unto them, Because of your unbelief (lack of faith and trust in God): for verily I say unto you, If ye have faith as a grain of mustard seed, ye shall say unto this mountain, Remove hence to yonder place; and it shall remove; and nothing shall be impossible unto you. 21  Howbeit this kind goeth not out but by prayer and fasting.”

Hebrews 11:1-13 Faith is Believing (Trusting / Risking Everything in and on God).

1 Now faith is being sure of what we hope for and certain of what we do not see.
2  This is what the ancients were commended for.
3  By faith we understand that the universe was formed at God’s command, so that what is seen was not made out of what was visible.
4  By faith Abel offered God a better sacrifice than Cain did. By faith he was commended as a righteous man, when God spoke well of his offerings. And by faith he still speaks, even though he is dead.
5  By faith Enoch was taken from this life, so that he did not experience death; he could not be found, because God had taken him away. For before he was taken, he was commended as one who pleased God.
6  And without faith it is impossible to please God, because anyone who comes to him must believe that he exists and that he rewards those who earnestly seek him.
7  By faith Noah, when warned about things not yet seen, in holy fear built an ark to save his family. By his faith he condemned the world and became heir of the righteousness that comes by faith.
8  By faith Abraham, when called to go to a place he would later receive as his inheritance, obeyed and went, even though he did not know where he was going.
9  By faith he made his home in the promised land like a stranger in a foreign country; he lived in tents, as did Isaac and Jacob, who were heirs with him of the same promise.
10  For he was looking forward to the city with foundations, whose architect and builder is God.
11  By faith Abraham, even though he was past age—and Sarah herself was barren—was enabled to become a father because he considered him faithful who had made the promise.
12  And so from this one man, and he as good as dead, came descendants as numerous as the stars in the sky and as countless as the sand on the seashore.
13  All these people were still living by faith when they died. They did not receive the things promised; they only saw them and welcomed them from a distance. And they admitted that they were aliens and strangers on earth.

“Faith comes from God; it’s His gift to those who hear the Gospel, but it needs to be exercised for it to grow stronger, exercise your faith and you’ll see mountains being moved.”

So my friends, if you have found that your own faith has begun to smoulder, then you know how to get it glowing again; get into God’s Word and let Him speak to you afresh. Avail yourself of all that He’s provided to enable that GIFT of faith to grow.

Secondly, if you’ve got friends who don’t yet believe or know God personally, then don’t simply say “Believe in Jesus” because that’s like trying to force silicone-sealant out of the tube with your fingers instead of using the device that’s been provided to make it easy. Faith is a gift from God, it comes by HEARING God’s Word, then it needs to be exercised to make it grow.

Another way to think of faith: It’s like a muscle. We’re all born with the gift of muscles, but some people get really huge muscles because they exercise them, the same is true with faith, God will give the gift of faith to anyone, but to make it grow it needs to be exercised. The way to spell faith is RISK 🙂

Have an awesome day, growing in the faith of the Lord Jesus Christ. Share your faith by letting those who don’t know Jesus know His Word and see how faith explodes into life in those professing atheists 🙂 Watch them backslide away from atheism.

Read Romans 10 in Context Below:

Romans 10:6-17 6  But the righteousness based on faith [imputed by God and bringing right relationship with Him] says, Do not say in your heart, Who will ascend into Heaven? that is, to bring Christ down;
7  Or who will descend into the abyss? that is, to bring Christ up from the dead [as if we could be saved by our own efforts].
8  But what does it say? The Word (God’s message in Christ) is near you, on your lips and in your heart; that is, the Word (the message, the basis and object) of faith which we preach,
9  Because if you acknowledge and confess with your lips that Jesus is Lord and in your heart believe (adhere to, trust in, and rely on the truth) that God raised Him from the dead, you will be saved.
10  For with the heart a person believes (adheres to, trusts in, and relies on Christ) and so is justified (declared righteous, acceptable to God), and with the mouth he confesses (declares openly and speaks out freely his faith) and confirms [his] salvation.
11  The Scripture says, No man who believes in Him [who adheres to, relies on, and trusts in Him] will [ever] be put to shame or be disappointed.
12  [No one] for there is no distinction between Jew and Greek. The same Lord is Lord over all [of us] and He generously bestows His riches upon all who call upon Him [in faith].
13  For everyone who calls upon the name of the Lord [invoking Him as Lord] will be saved.
14  But how are people to call upon Him Whom they have not believed [in Whom they have no faith, on Whom they have no reliance]? And how are they to believe in Him [adhere to, trust in, and rely upon Him] of Whom they have never heard? And how are they to hear without a preacher?
15  And how can men [be expected to] preach unless they are sent? As it is written, How beautiful are the feet of those who bring glad tidings! [How welcome is the coming of those who preach the good news of His good things!]
16  But they have not all heeded the Gospel; for Isaiah says, Lord, who has believed (had faith in) what he has heard from us?
17  So faith comes by hearing [what is told], and what is heard comes by the preaching [of the message that came from the lips] of Christ (the Messiah Himself).