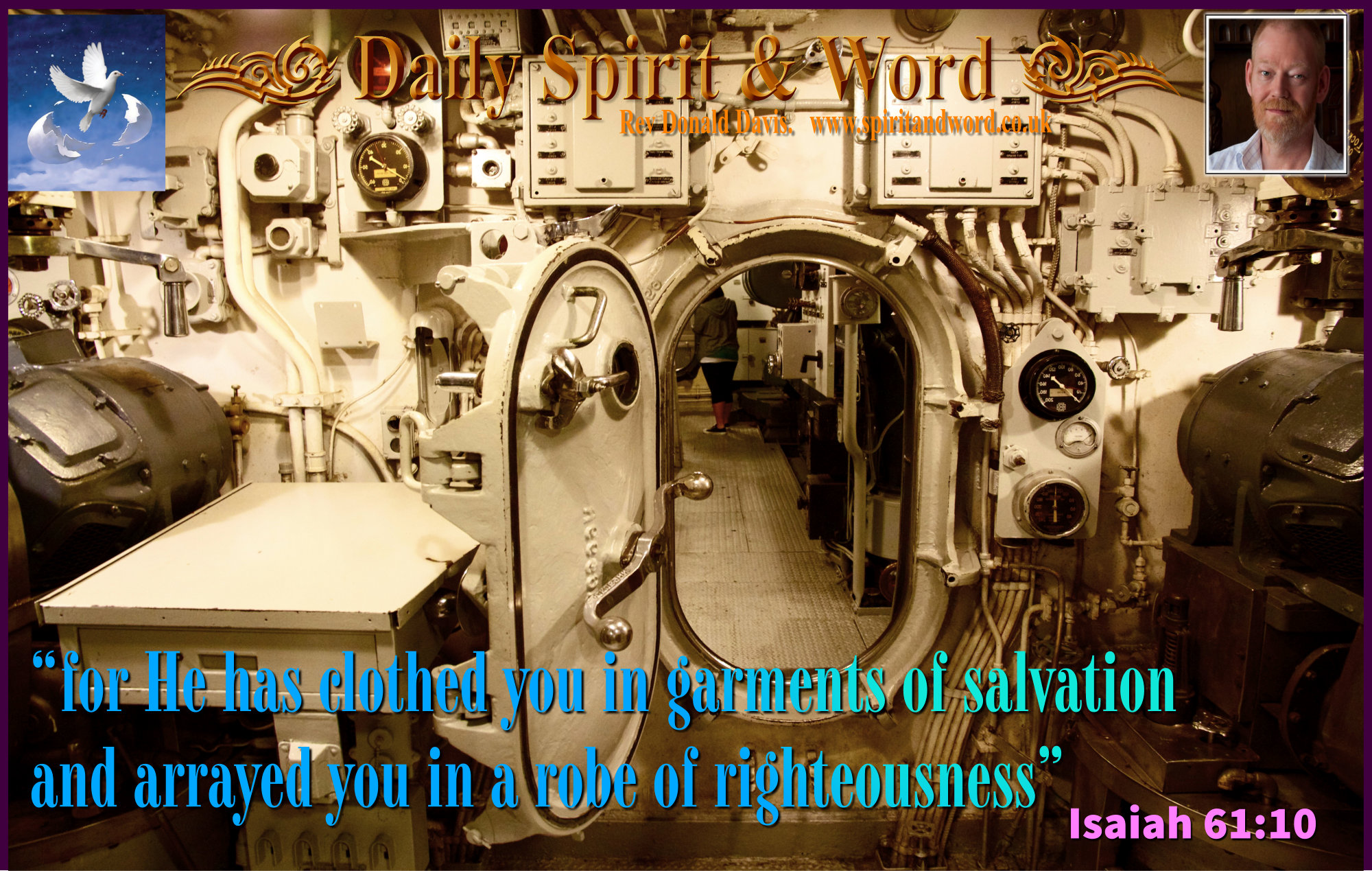 When it’s GOOD to be SALTY.

As many of you know, I served in the Royal Navy for 17 1/2 years. That half year is so important, because the last six months was really difficult. I had to come to terms with the fact that I was leaving, I wanted to leave, but there were things that you just get so used to in the Navy. There are privileges that no one, except another Matelot, would understand. You get an I.D card when you join up and that gives you instant access into any and every Naval base and establishment, but when you leave you’ve got to hand back your I.D. Card and keeping it as souvenir, memento or keepsake is not an option.

As a Christian we’ve also got a kind of I.D. Card too, it gives us instant access into the presence of God. It’s instantly recognisable by Heaven and from the moment we have it God sees us as one of His own. What is it? It’s the robe of righteousness, when we are wearing that robe all Father God can see is His Son Jesus Christ. We are totally righteous in His sight, our sins are covered over in the Love of God, washed away and cleansed, He sees us as we are in Jesus; Holy, Good and Salt and Light. Therefore we’ve got access into His presence and we can come before Him with joy and boldness. No one, but a true Christian, can understand the privilege it is to have this robe of righteousness.

After I left, there was no going back, no getting into the Establishments. No amount of pleading with the gate staff would enable me to gain entrance, without an I.D card I was just like every other civilian. However, when we are given our robe of righteousness, we’ll never have to hand it back again, we can keep it forever.

Isaiah 61:10 “I delight greatly in the LORD; my soul rejoices in my God. For he has clothed me with garments of salvation and arrayed me in a robe of righteousness, as a bridegroom adorns his head like a priest, and as a bride adorns herself with her jewels.”

This was a verse that I sang on many occasions in the depths of the sea on a Submarine. In the heat and sweat of the Engine room or Reactor Compartment, I’d be singing my heart out to the Lord at the top of my voice. You know my friends, when you sing something over and over and over again, instead of the tune getting boring, the truth begins to impact your soul.

Now can you see why I’d emerge from the depths of the heat of the Reactor Compartment energised. No I’d not be contaminated with radiation 🙂 No it’s wasn’t getting those rays into my soul, but the JOY of the Lord came flooding in and when I came out it was obvious to everyone. I’ll never forget the looks on their faces.

Another time, when in the Engine room, we’d been cleaning up and oil spill and it was dirty and hot, but after singing praises to the Lord I emerged onto the platform where everyone gathered for a rest and a cup of tea, and they stopped and looked at me in astonishment. I was full of joy and energy in the LORD and it was obvious to them all.

One Chief, my superior at the time, came and asked me, “Ginge, how can you be so happy with such a (swear-word) job?”

“Everybody else came out of that Engine room moaning and complaining about the heat, the mess and feeling horrible being covered in oil, but you are literally beaming with glee, what gives?”

I said, “Chief, I was singing to Jesus and the job became a delight”. He scratched his head.

There is a saying in the Navy, “Salty old sea dog” it’s used for someone who’s been in the Service for a long time and knows a thing or too about the Navy. My friends, when you get to know Jesus, after years of hardships and service in His Kingdom, you’ll get the title SALTY old Christian. Jesus said, “You are the SALT of the earth” and “You are the LIGHT of the world”

13 “You are the salt of the earth. But if the salt loses its saltiness, how can it be made salty again? It is no longer good for anything, except to be thrown out and trampled by men.
14  “You are the light of the world. A city on a hill cannot be hidden.
15  Neither do people light a lamp and put it under a bowl. Instead they put it on its stand, and it gives light to everyone in the house.
16  In the same way, let your light shine before men, that they may see your good deeds and praise your Father in heaven.

You too may be having a hard time, you might be toiling at a meaningless job, you may be experiencing the heat and no matter how hard you try, you can’t get out of the situation. Rejoice, praise, pray and sing to Jesus; His LOVE will lift you up. His presence will come into your heart and soul and you’ll be a shining light for everyone to see. Sing the song, “I delight, greatly in the Lord, my soul rejoices in my God. For He has clothed me in garments of Salvation and arrayed me in a robe of Righteousness” you’ll be coming into the throne room of Heaven. You’ll be transformed and the toil and hardship will seem as nothing.

Jesus wants you to be SALTY and make a difference in the world, He’s given you access into the throne room of Heaven and when you come before Him, clothed in His Salvation and robed in His Righteousness, you’ll be full of delight and you’ll sing His praises. Let’s be SALTY for Him and let the LIGHT shine from our faces today for Jesus.

It’s good to be SALTY sometimes.