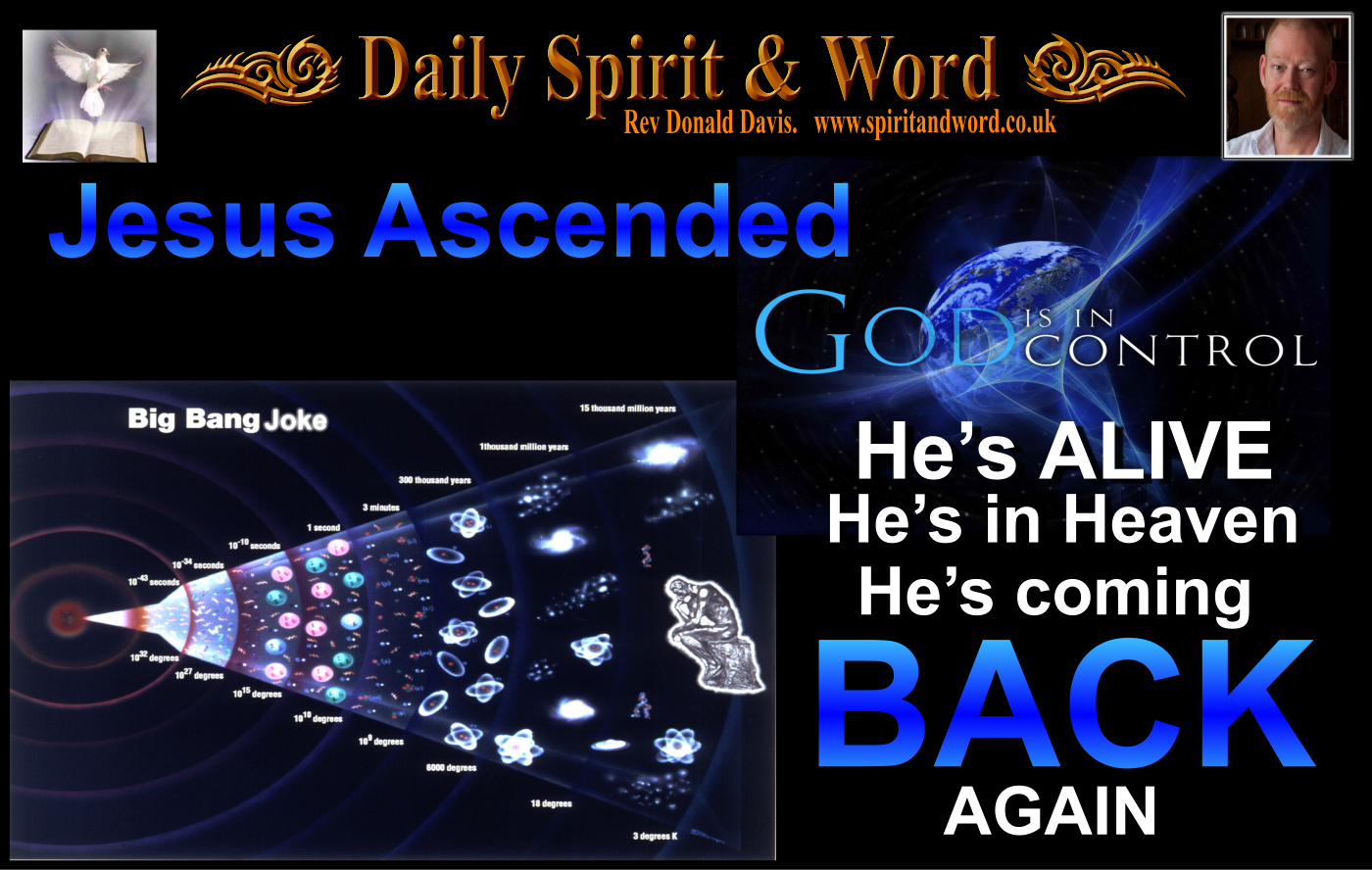 Daily Spirit & Word: 524: The Ascension of the Lord Jesus Christ.

Good morning my friends. WOWzer! We’ve made it. We’re at the end of our journey, we’ve arrived at the final day on our 40 day’s quest with the Lord. Have some of your questions been answered? I don’t know about you, but before I was a Christian I had all sorts of questions and fears; e.g. I didn’t like the thought of death and wondered what happened once I would die. I wondered, like most people, why I was here on the earth and I tried for many years to discover my life’s purpose by pursuing a career, success in life and financial security. O yes I had lots of questions and fears, but you know, once I discovered the Lord Jesus Christ, the Creator of the whole Universe, all my questions and fears vanished like smoke in the wind. Why? Because once I knew the CREATOR the Creation came into a much clearer perspective. I could SEE why I’m here and know God’s purposes for my existence and my eventual destiny would be to be with Him forever.

The Ascension is like those questions for purpose and existence: it’s produces a desire to know what’s actually happening.

The Ascension of Jesus is mentioned in a few places in the Bible and explained most clearly in the book of Acts.

Acts 1:9-11 9  After he said this, he was taken up before their very eyes, and a cloud hid him from their sight.
10  They were looking intently up into the sky as he was going, when suddenly two men dressed in white stood beside them.
11  “Men of Galilee,” they said, “why do you stand here looking into the sky? This same Jesus, who has been taken from you into heaven, will come back in the same way you have seen him go into heaven.”

When folks who don’t KNOW Jesus read about the ASCENSION they are left wondering all sorts of things and they’ll come up with fantastical ideas of what happened and how it happened and where is the place that Jesus disappeared to? I’ve seen programs on the History Channel that think Jesus was abducted by Aliens or that He was actually from a superior Alien race and was just returning home to his spacecraft. He was being beamed up like we see in the hit TV Show ‘Star Trek’. (I loved that show as a kid). Theologians like Tom Wright imagine that Jesus didn’t really ascend in front of the Disciples as Luke recounts to us in the book of Acts, but it was just a first century Jewish mind trying to explain something they didn’t fully understand. The Theologian’s commentary is no different from the Atheist and the Agnostic, they just can’t accept that Luke has recorded what literally happened. i.e. that Jesus Ascended right in front of the Disciples as Luke tells us.

I never had the luxury of knowing anything about the ascension of Jesus before I knew Him as my Lord. So I can only imagine that this type of questioning and reasoning are the same as my own regarding; purpose, identity and destiny before I knew the Lord. Once you know the Saviour the questions about; How? Why? What? or Where? regarding the Ascension (and everything else) all seem meaningless, because you KNOW Jesus in your heart. He’s Alive, you know Him, you don’t question because you’ve got the EVIDENCE within your own being. The Holy Spirit REVEALS Jesus to you. The Holy Spirit brings SCRIPTURE alive to you and you just KNOW that it’s God’s Word and that these things, written by Luke are indeed historical events, they are not allegory, emblem, fable or parable; or ways of simple people explaining what they didn’t understand. After all archaeologists and scientists today are still in the dark about HOW the ancient peoples on the earth had the know-how to build the Pyramids and other structures around the world. Roman concrete is far better than our modern equivalent, but they don’t know HOW they made it so strong to last 2000 years, but we can’t make it last more than 20 years today. So trying to KNOW what was happening in the Ascension is like chasing the wind, we’ll never really know until we know the LORD himself. And once you KNOW the LORD, those questions don’t seem to matter any longer.

“It’s time to let down your guard and open your minds to the reality of the CREATOR of all things. Once you do, the Big Bang will vanish like a whisper in a tornado.”

The Atheistic Quest For Origins.

I find it amazing that many ‘atheists’ will have a very strong desire to get to the bottom of how the Universe was created. What they are ultimately desiring to discover is; “How did I get here?” and “Why am I here?” and “Where will I go when it’s over?”

It’s like having an Alien Spacecraft given to you as a present, then taking it to bits trying to discover how on earth they made it work, getting to the bottom of this new found Alien technology, when all the time the Alien who gave it to you is standing right beside the craft. Hello! Wake Up, JUST ASK THE ALIEN.

Of course they’ll discover new things from analyzing the craft and it’s construction, they possibly discover new materials and how to use existing materials in different ways, but wouldn’t it be just as easy to ask the person who made it in the first place?

The Atheist Scientific Community: (Please note, I’m not saying all scientists are atheists) However, some of them are on the same kind of quest. They have spent hundreds of billions of £ and $ on the Large Hadron Collider (THC). This is an amazing attempt to accelerate particles and crash them into one another, then analysing the resultant collision, they are trying to discover the particles that existed at the time of the so called “BIG BANG”. And guess what they called the first new thing they discovered, you’ll laugh out loud when you read it, they called it; “THE GOD PARTICLE”. HaHaHa…

What are they doing? The same thing as the recipients of my imaginary Alien Spacecraft, they’re pulling the creation to bits to try and discover HOW God made it. It seems foolish to me, but that’s because I’ve come to know the Creator. Instead of questioning how He did it, I just thank Him for His awesome, amazing gift of Creation. So I’ll enjoy it and glory in His outstanding, amazing and glorious creativity. Before I was born of God’s Spirit, I too questioned like the Atheist and the Scientist, I wanted to know, but once I knew the Creator, then all questions just seem to vanish like smoke in the wind. I didn’t need to know anymore, because I now knew the Creator. I trust Him enough to know that what He’s made for us is ‘good’.

When I read His WORDS OF PROMISE: it produces delight, reassurance, comfort and direction for my life.

Jeremiah 29:11 (NIV) “For I know the plans I have for you,” declares the LORD, “plans to prosper you and not to harm you, plans to give you hope and a future.”

So when I read about the Ascension of the Lord: How He literally was taken up and disappeared before their very eyes, instead of feeling puzzled or needing some questions answered, I’m just full of JOY that the Lord’s Mission on Earth was complete, His Disciples were ready for the Holy Spirit and for His Mission throughout the Earth, they now knew that Jesus would one day return to Earth in the same way they’d seem Him depart.

What a glorious voyage of discovery we’ve been on over the last 40 Days With Jesus. We’ve looked at so many different ascpects of the LORD’S Appearances to His followers before His final departure for Heaven. Every time I do a study like this, it changes me in some way, that’s why I just LOVE gathering together, worshiping, praying and reading and sharing God’s Word like this. What have I gained personally? The Lord has impacted me with a brand-new awareness of His presence with me everywhere I go. Not just on a Sunday, not just when we gather together in worship, but actually, literally and really with me every single moment of the day. WOWzer! Praise You Lord Jesus.

The solution for the questing Atheistic / Scientific community and the reasoning / doubting Theologian: JUST ASK THE CREATOR. What should they ask the Creator for? I’d say, ask Him to be your LORD and your questions will also vanish, because you’ll have the CREATOR of everything inside you. You will not NEED to know anymore, because you will HAVE the answers within. Remember this, “God doesn’t believe in Atheists” Hahahahah. Why? Because He knows;

Psalm 14:1 (NIV) The fool says in his heart, “There is no God.” They are corrupt, their deeds are vile; there is no-one who does good.

God’s knowledge of each and every one of us is perfect. So it’s time to let down our guard and open our minds to the reality of the CREATOR of all things. Once you do, the Big Bang will vanish like a whisper in a tornado.

Jesus IS the LORD of Creation: He came to His Earth to SAVE us from God’s wrath and anger against our sinful rebellion. He’s ready now, because He’s the Ascended Lord, to give you everything you need to live on this earth and to be with Him for all eternity. Turn to Him NOW. Walk with Him every day. You’ll see this awesome CREATION from a brand-new perspective too.

Daily Spirit & Word: 524: The Ascension of the LORD Jesus Christ.