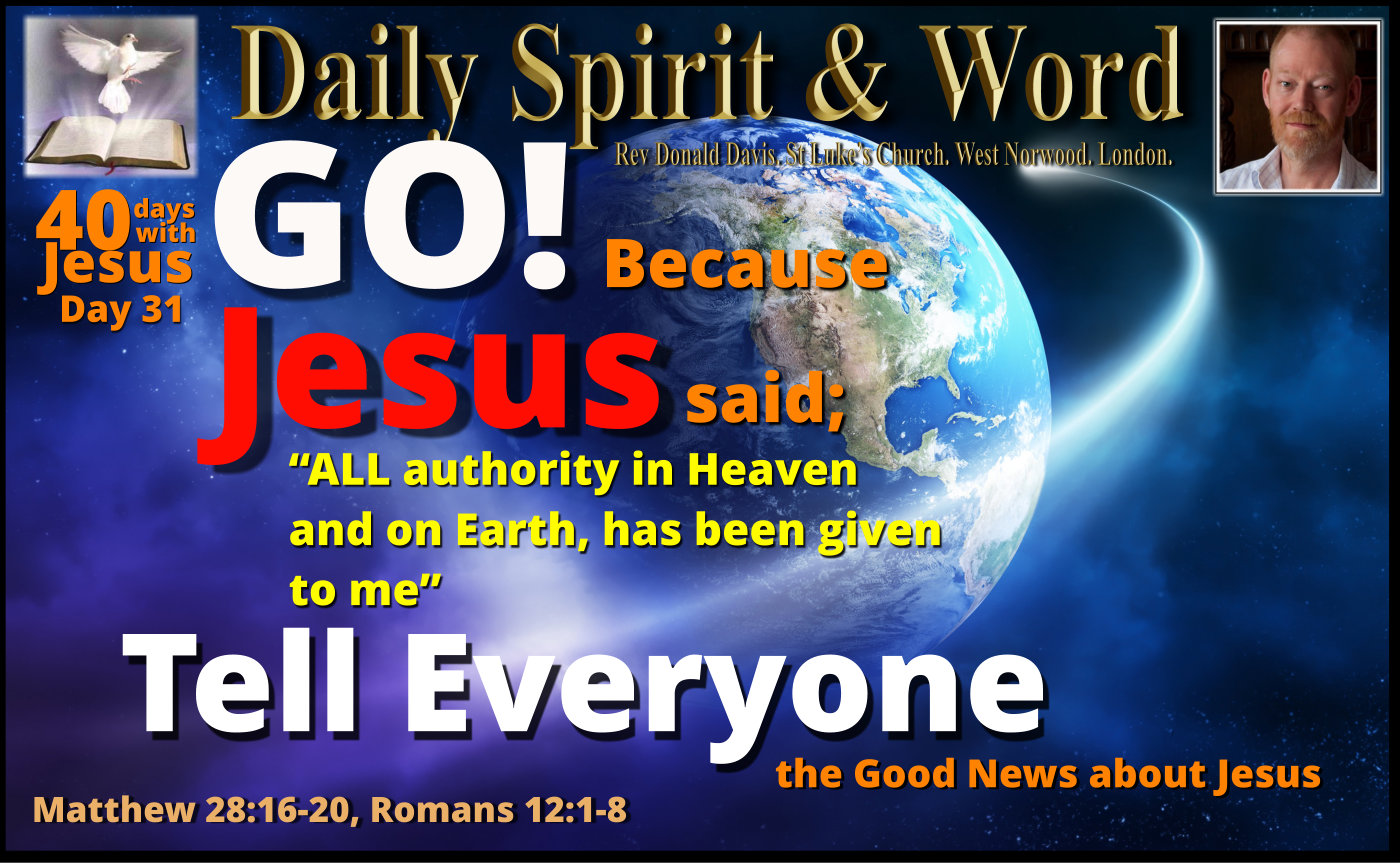 Daily Spirit & Word, 514: Jesus Is Your Authority For His Mission.

Good morning my friends. Firstly let me thank you all for your prayers. I missed posting yesterday because I was in terrible pain, it didn’t get any better throughout the day. Yes! I’ve been taking my tablets and they eased the pain, but as soon as they were wearing off, the pain returned. I’m still praising the LORD and what’s helped more than tablets is the knowledge, that brothers and sisters are praying for me. That the Lord is faithful and when we turn to Him in praise and thanksgiving He hears us. He’s truly the GREAT SHEPHERD of the sheep and walks through the valley of the shadow of death with us.

Today, we’re continuing with this week’s focus on the GREAT COMMISSION. How we’re sent out into the world to bring others into God’s Kingdom and how we’re to disciple those who respond to the Gospel. Today, we’re going to discover the ultimate AUTHORITY for our Mission: it’s the LORD Jesus Christ Himself. Knowing this will set us free, because we’ll KNOW we’re not just taking the initiative to go and evangelise others, but we’re just being obedient and we’ve also got Divine authority to share the Gospel with EVERYONE.

Authority: The Bible has so much to tell us about Authority, but let’s just make certain we understand the word and what Jesus meant when He said,

Matthew 28:18 18  Then Jesus came to them and said, “All authority in heaven and on earth has been given to me.

So we can see that Jesus has been given Authority: The Power and Right to GIVE ORDERS and to MAKE DECISIONS. He had ADMINISTRATIVE CONTROL He is an EXPERT who’s views are to be taken as DEFINITIVE. There is no DOUBT and every Disciple can have an ASSURED BELIEF in His ABILITIES to perform or do all that He’s promised. He’s also given us His AUTHORITATIVE WRITTEN WORD: The Bible.

Now when we read Jesus words again; “All authority in heaven and on earth has been given to me” We can see that it’s not a little bit of authority or partial authority, but ALL authority has been given to Jesus Christ. Not just on earth or over our lives but over the whole Universe and the Kingdom of Heaven. Jesus really is the Boss of the Cosmos and the Heavenly places.

What does that mean?

Well when I was in the Royal Navy, I was given authority sometimes to enter certain restricted areas. Even though Military personnel had their Identification Card that enabled them to enter Military Establishments, I had a much higher clearance, I could enter Top Secret areas. How? Because I’d been given a photographic and electronic pass that I wore around my neck. When I placed the pass on a machine, the gates opened and I was allowed to enter. If someone tried to enter who didn’t have one of those passes or even some other way; all Hell would break-out and armed security guards would come running to the scene. The pass was my authority to enter and gain access.

Those who belong to Jesus have been given similar authority to access areas and powers that normal human beings cannot. We are members of an elite group, because we’ve been specially selected by the Lord of Creation and given His permission to go anywhere in the world with the specific mandate of fulfilling His commands.

How can we do this?

Because Jesus is the ONE who has the AUTHORITY to send us.

Where does Jesus Authority come from? The answer is given to us in the passage we just read above. “All authority in heaven and on earth has been given to me.” Matthew 28:18.

Jesus told us many times throughout His ministry that the Father and the Son are ONE: but the Son willingly and wholeheartedly submits to the Father’s will. Why? Because, unlike sinful human beings, God is LOVE and Jesus knew His Father intimately. He knew that submission is complete FREEDOM. To submit in this way takes total trust. Just as a child trusts his own father, i.e. he’ll launch himself into his father’s arms from a great height. So Jesus fully trusts His Father, even to the point of giving up His own life upon the cross. Even though Jesus submits to the Father’s will, He is non-the-less DIVINE. Many times we’ll read in the Bible of the Jews understanding of this, because time and again they tried to stone Jesus because He claimed to be the Son of God. To them such a statement was blasphemy, because they said, “You are mere man, claim to be equal with God”. He did, because He was. Jesus Christ the Carpenter’s son, was also the Divine Son of God on earth. He has been given ALL authority.

But notice that Jesus didn’t just leave us with the Father and Son relationship. In this passage He also reveals our Mission and Commission is from; The Father, the Son and the Holy Spirit: The Trinity. What a divine MANDATE we have for sharing the Gospel. It’s not our message, but His. It’s not our idea or our own initiative to GO. The Disciples din’t just dream it up my friends, it’s not another good idea, it’s a God idea. It’s His WILL, it’s HIS Mission and He has the Authority to COMMISSION.

Notice also the word COMMISSION:  It should remind you that not only have you got the Authority to go, but it’s a JOINT Mission. We’re simply working in a team: It’s a DIVINE team: We’ve get to accompany Jesus, because He’s with us Always. We also get the Holy Spirit, who’s in us and empowering us for the Mission. We also get the presence of our Heavenly Father, because when we come to Jesus we become ONE with Him too. WOWzer! We’re on a Mission together to go out into the world an reach out to mankind, to seek and to save the lost together.

That tells me this today:

Now all we’ve got to do is TRUST AND OBEY. We’ve got everything we need to accomplish God’s Mission we’re doing it together, so let’s trust Jesus’ words today and in simple, childlike obedience, do it. As you do it, knowing you’ve been sent and are accompanied by Jesus will give you great confidence. I’m sure those Disciples who doubted when they saw Jesus would have had their doubts displaced either at His words or later when the Holy Spirit filled them, but it would only have been confirmed as they were being obedient. It was, when Peter stood up to address the crowds on the Day of Pentecost: The Divine POWER was made manifest and 3000 people came to Jesus Christ that day. It will happen to you too my friends, but you’ll only see it if you are obedient. You’ll never experience it in any other way: all you’ve got to do is TRUST AND OBEY.

So whenever you don’t feel like going and sharing and spreading the GOOD NEWS, know this and take it to heart: Jesus has given you the authority to proclaim the Gospel to everyone, He’s given you the Power through His Holy Spirit, so that you don’t have to depend upon your own strength, and to top it all off, He’s going to go out with you. Oh WOWzer! Why wouldn’t you go and have a go today? Try it in His strength. Share the Gospel with someone today: YOU’LL BE AMAZED at the results.

Have an awesome day my friends, fulfilling the LORD’S Mission with Him and In Him. Do it today.

P.S. Just in case you don’t know WHAT the Good News is, that you’ve been Commissioned and Commanded to share;

40 Days With Jesus: Day 31: Divine Authority Comes From Jesus: So Jesus IS Your Authority For His Mission.