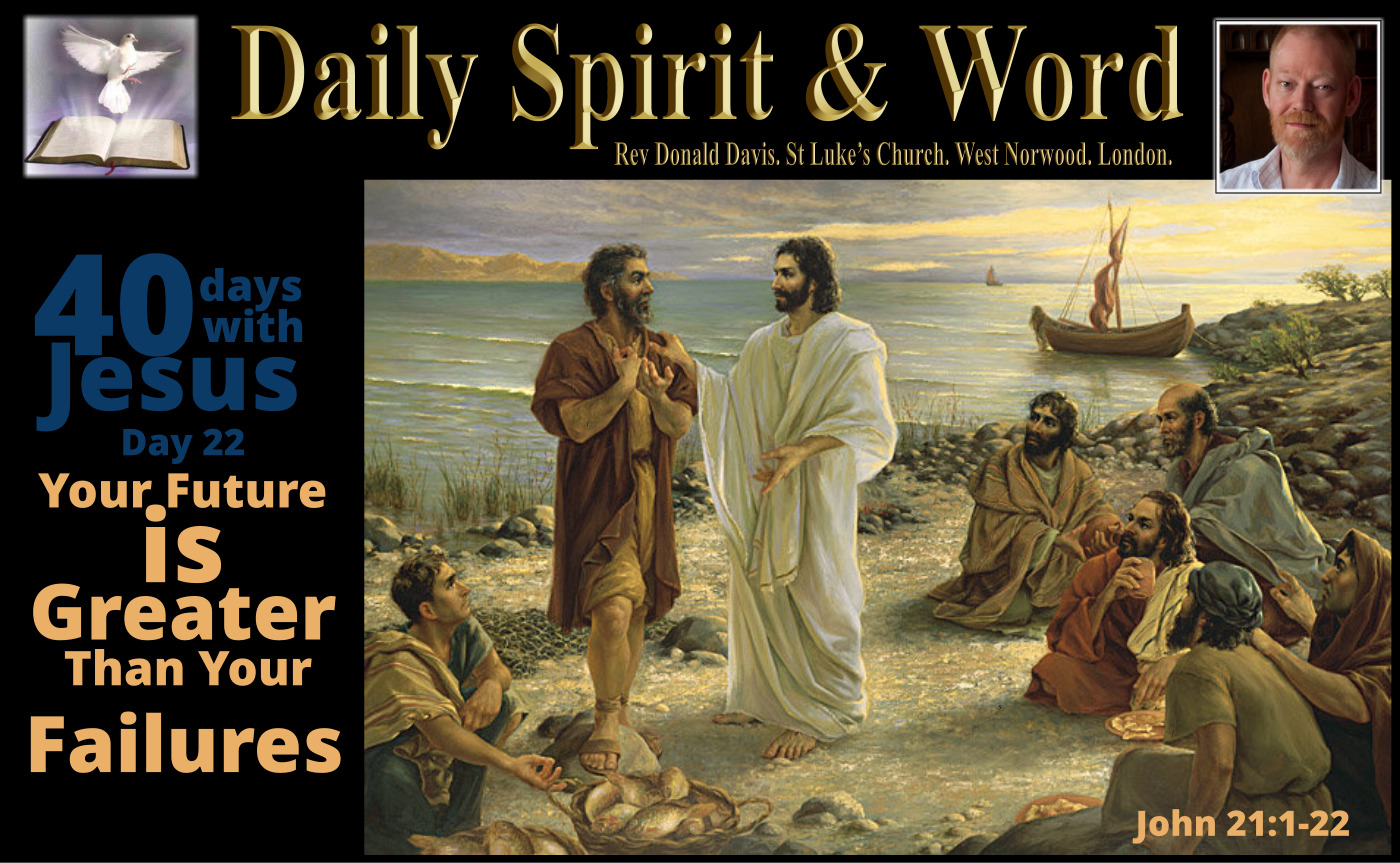 Daily Spirit & Word, 506: Your Future is Greater than Your Failure.

40 Days With Jesus: Day 22: Your Future is Greater Than Your Failure.

At the 4th Session of the Course last night we discussed many things, but what I found most encouraging as the group leaders was the group are getting to know one another better, and the brown layers of the onion are coming off. Praise the Lord! It really does take time for a group of strangers to open up and begin to share their views, thoughts and feelings. There are times to share openly and times to share with just one or two others, it’s a fine balance of being candid and being wise. The Video Last night helped and opened up some aspects of the Christian life that need to be addressed by everyone who sincerely wants to follow Jesus Christ as Lord: Our past, present and future failures, sins and moral struggles.

I’m always encouraged when the group begins to meld into one and people start to watch out for one another, because you know then, that Jesus is starting to really build His body. It’s like He’s the Cement that sticks us all together.

In this fourth week of 40 Days, we’ll be looking at the Resurrection Appearance of Jesus to the Disciples by the Sea of Galilee: John 21:1-22. How Jesus makes the approach after they’d failed to catch any fish after fishing all night, then following Jesus instructions they manage to catch so many that the boat begins to sink. Then Jesus cooks some fish for them and finally Jesus takes Peter off and has a chat about His commitment and love. We’ll see just how gentle a KING we’re serving and how He deals with our past failures and present struggles.

Personally, I’d have titled this week’s theme: “The Gentle Saviour’s Appearance Restores Our Walk” But we’re following Dave’s study book and he’s given it the Title: “Overcoming Failure.” It’s good to know how to overcome our failures, but I’d say we can overcome many more failures, much more easily, when we get a greater revelation of the Resurrected Lord Jesus, His character and motives as He reveals Himself and relates to His Disciples back then and to us today.

Day 22’s Focus is: Your Future Is Greater Than Your Failure.

Again I’m tempted to change the title to; “Your Future in Jesus is Brighter than Your PAST Failures”… It’s always easy to get picky and choosy and modify anothers’ hard work though.

John 21:1 1  Afterwards Jesus appeared again to his disciples, by the Sea of Tiberias. It happened this way:

John 21:14 14  This was now the third time Jesus appeared to his disciples after he was raised from the dead.

All of us struggle in life and we’ve failed in many different ways. Some of us are still living in the consequences of those failures and perhaps we’ve begun to wonder if there is ever going to be a way out or if we’ll ever get over it: There’s GREAT NEWS for us all today. “Your Future Is Greater Than Your Failures”:

The Call From God IS Much GREATER than Your Fall from God’s GRACE.

Jesus glorious light is brighter than your dimmest darkest hour.

History is full of people who’ve fallen down and failed, but who’ve managed, somehow, to pick themselves up, dust themselves off and do even greater things with the rest of their lives. Winston Churchill’s failure at Galipoli in the First World War, almost crushed him, but he rose from the ashes and became one of the most successful and popular modern leaders in the world. He led a Britain battered and broken through the Blitz and finally to victory over the evil Nazi regime. My friends, it’s possible, even without Jesus to get back on track again: However, when we do it without Jesus, our past MORAL failings are not dealt with, we’ll be carrying them for the rest of our lives.

But imagine what life is going to be like if we do it with Him? When Jesus comes and visits us to deal with our FAILURES, He takes into account both our PRACTICAL FAILINGS and our MORAL FAILINGS. It is possible today, because of Jesus Resurrection from the Dead: The Disciples thought that Jesus had been defeated, that His mission had failed and they’d probably have begun to think about getting back to their old ways of life, but when He kept on APPEARING to them, to give them assurance and guidance, they were getting back on track again.

Today, we’re thinking about this third appearance by the Sea of Galilee and how Jesus comes at a time when they’ve decided to go back, go back to what they know best in the world: Remember, Peter is a Fisherman and instead of doing what Jesus had told them, “To WAIT in Jerusalem, Until they are clothed with POWER from on high” he’s gone back to his old skill, fishing, and though he tried all night to catch some fish, he’d failed. We need to really dwell upon this:

He’s a Fisherman, He’s been fishing all night and caught NOTHING. Peter failed yet again.

Not only had Peter failed Jesus by denying Him three times, but now he’s done it again by being disobedient and gone off to do some fishing for fish instead of fishing for men. He’s trying to pick up his old life and now he’s failed at that too. That’s when Jesus appears again to them, when they’ve failed.

My friends, you may have failed at your work, you may have tried your best to be a ‘good’ Christian. You’ve tried and tried and worked as hard as you can, but then somehow the shutters keep coming down, you keep failing. That was Peter’s experience: NO FISH after fishing ALL NIGHT. He was an experienced fisherman. Then comes Jesus, in the midst of this failure and even though the disciples didn’t recognise him at first, he gives an instruction and they listen to the strangers voice and do what He says. It’s amazing, they catch so many fish, then they realise that it’s JESUS who was standing there on the shore all along.

When you’ve tried your best and failed my friends, it’s time to listen again to what God our Lord is telling us to do in life. In order to do that, we’ll need to have a good relationship with Jesus, but even if we’ve fallen away, like Peter had, we must remember, that even when we give up on God, we may haved denied Him, we may have gone back to our old ways of living on this earth, remember this; He’ll NEVER give up on us.

Though you may give up and go back to your old ways, Jesus will NEVER give up on you.

Many times I’ve known people who’ve tried to wander away from Jesus, they’ve had great excuses; they’ve been hurt, someone in church upset them, they didn’t find another fellowship, so they just stopped going, slowly the desire to read the Bible diminished too and prayer was a distant memory. When they found themselves deep in sin and far away from Jesus, they discovered that Jesus was only a prayer away. Jesus will NEVER give up on you my friends, no matter how far away you may think you’ve wandered or how deep you’ve fallen into sin. His love for you is much higher than the depth of your depravity. He promises to complete the work that He’s begun in your life.

Philippians 1:3-6 3  I thank my God every time I remember you.
4  In all my prayers for all of you, I always pray with joy,
5  because of your partnership in the gospel from the first day until now,
6  being confident of this, that he who began a good work in you will carry it on to completion until the day of Christ Jesus.

When Jesus called you my friends, you can be certain of this or confident of it; Your Future IS Greater Than Your Failure, because Jesus is going to finish the work that He began in your life.

Have an AWESOME day with Jesus. Praise His Holy Name.

Here’s a man who thinks that Heaven is a little white light that grows bigger and you jump into the white space and create a place that you love: mmmmmmm. Watch as Ray Comfort takes him through the Gospel and shows the real reason that he need to get ready to meet with Jesus.

I’m often amazed at the way the people who split the Bible into chapters chose to break verses up and sometime it makes me cringe, this is one such occasion. We must remember that John’s Gospel didn’t have Chapters or Verses when it was originally written, these are for our benefit and to aid Bible study and memorisation. It was a way of ensuring preservation and standardisation of the Bible’s text.

John 21:1 is a verse that needs some picking apart to help us understand what’s happening: On the surface it’s obvious, Jesus has “appeared again” but where did it happen: The text tells us “The Sea of Tiberias” that’s just another name for the ‘Sea of Galilee’.