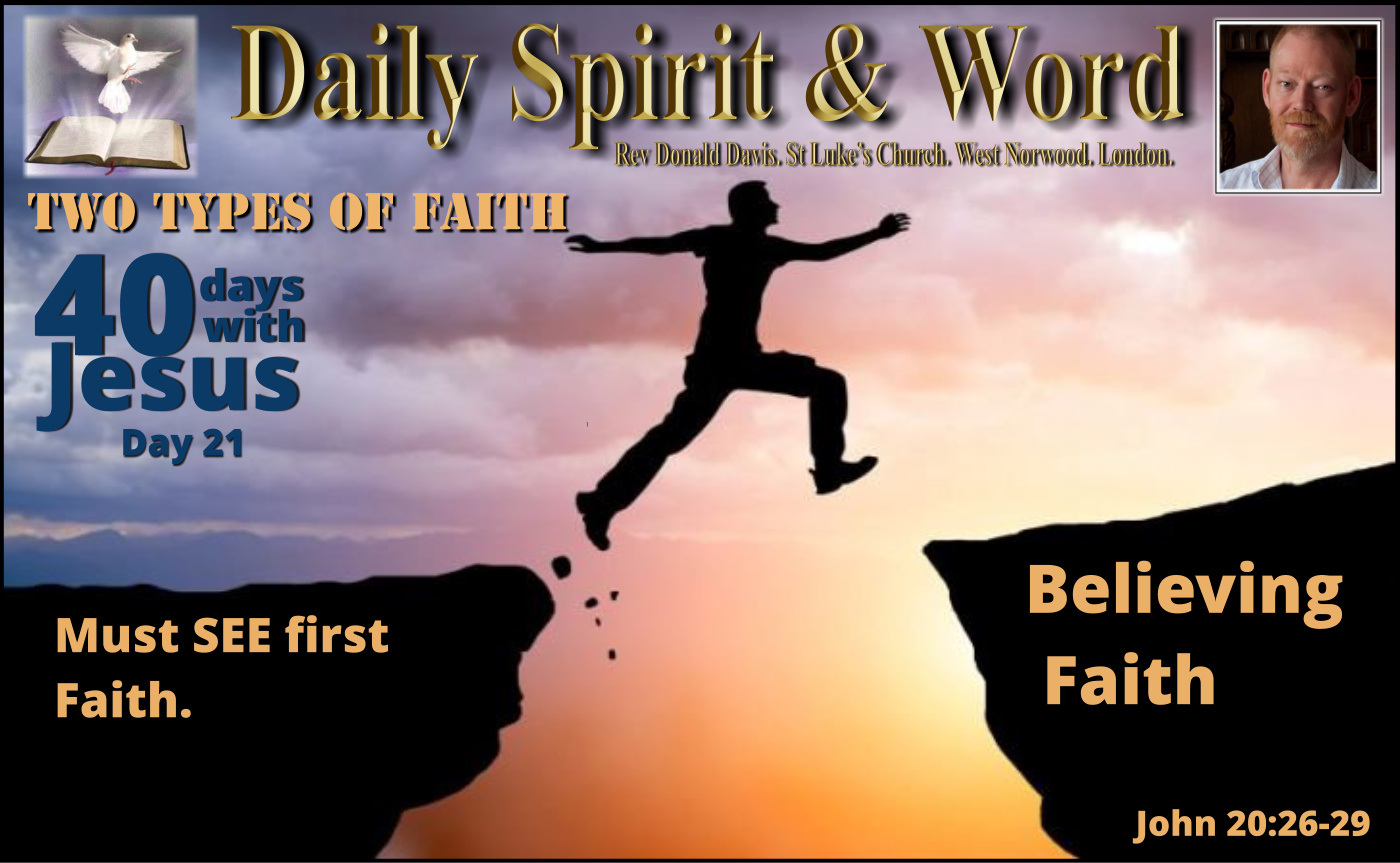 Good morning my friends, we saw yesterday how Thomas had sincere doubts about Jesus being resurrected from the dead and how he made the declaration, “Unless I see the nail-marks, I refuse to believe” However, Thomas was granted his desire just a week later. You’ll notice that there are generally two types of faith: one that needs to see or know before it will believe. This is almost like Scientific Proof Type of Faith. Even today people will say to us as we share Jesus on the streets, “Show me God and then I’ll believe”… Another way this type of faith is expressed is, “When God grants me all my wishes, then I’ll believe in Him”… I can’t tell you how many people have said that to me.

Then there is the Biblical Type of Faith: That believes God without being able to see any evidence. However, even Biblical Faith is not merely Blind Faith. We believe because of something. There is a reason we choose to take the step of faith and put our trust in God and His faithfulness.

When we look at faith it’s almost as if it’s something we have to muster up within ourselves, but it’s not, because faith is a gift that needs to be received. God gives faith and once we’ve receive the gift of faith, it’s then that it needs to be put to use or exercised. Let’s read and see how Thomas used the gift of faith that the LORD gave to Him.

John 20:26-29 26  A week later his disciples were in the house again, and Thomas was with them. Though the doors were locked, Jesus came and stood among them and said, “Peace be with you!”
27  Then he said to Thomas, “Put your finger here; see my hands. Reach out your hand and put it into my side. Stop doubting and believe.”
28  Thomas said to him, “My Lord and my God!”
29  Then Jesus told him, “Because you have seen me, you have believed; blessed are those who have not seen and yet have believed.”

We simply don’t know if Thomas reached out and touched Jesus crucifixion wounds, personally I don’t think that he did, because of what Jesus said to Thomas after his declaration “My Lord and my God”. One of the best and clearest claims that Christians have for the Divinity of Jesus Christ, Jesus is God. What did Jesus say to Thomas? “Because you have seen me, you have believed” Notice Jesus didn’t say, “Because you touched My wounds, you have believed.” That’s why I think Thomas didn’t actually need to touch those wounds.

We’ve probably all made a Thomas kind of declaration, only to eat humble pie later. However, as I said, Thomas made one of the strongest declarations of faith in the whole Bible; Upon seeing Jesus, Thomas knew Jesus was both LORD and God. WOWzer! That’s the revelation that every single person needs to get as well. Jesus said it like this, “Because you have seen me, you have believed; blessed are those who have not seen and yet have believed.” Yes my friends, that you and me. We can’t see Jesus but we believe (if you believe). We don’t believe becuase we’ve seen Jesus, we believe because we’ve become convinced and convicted of our sins.

Personally, I knew Jesus was alive, I believed in Jesus for a few weeks before I eventually put my trust in Him as my Lord and my Saviour. But my knowledge that Jesus was real, was alive and was God came because I was attending church. I’d heard sermons and it was the evidence of the people of God, how their lives were different from mine. It was quite a long, slow process of my journey to eventual trust in Jesus, almost three months, but by the end of that time I KNEW who it was and why it was that I was turning to Him in faith and repentance.

That’s why one of my favourite verses in the Bible is  Romans 10:17 “Consequently, faith comes from hearing the message, and the message is heard through the word of Christ.”

Romans 10:17 “Consequently, faith comes from hearing the message, and the message is heard through the word of Christ.”

Faith come by HEARING: So many times Jesus used the phrase, “Let him who has ears to hear”  i.e. “Let him who’s been given the gift of faith, exercise that gift and put their trust in God”. Why? Because FAITH comes by HEARING.

He also said, that there would be many who’d be constantly HEARING, but never perceiving… We’ve got Churches full of people who hear God’s Word, who hear the Gospel many, many times, but for some reason don’t come to the point where they put their FAITH AND TRUST in the Lord. I don’t know why that is. It’s one of the greatest frustrations of those who’ve actually seen the light, heard the good news and responded. We’re dumbfounded sometimes why other can’t see it. Just the other day a lady said to me, “Why can’t they see? Why are they coming to church and settling for a mere form of Christianity without the power”. I said there are many reasons for it; first we must remember that faith is a gift that God gives. It comes in response to His call. He calls us by His Word. That’s what happened to Abraham when he exercised Biblical Faith. He trusted God’s Word and it was credited to him as righteousness.

So my friends, when we hear God’s Word, Faith comes to us, but it’s when we exercise that faith or use it to trust in God that it becomes effectual.

There are people who’ve been given this gift and don’t use it. It’s like believing that a chair can hold your weight, but instead of sitting on the chair you choose to sit on the floor instead. That like having Faith in Jesus, but not putting your trust in Him for your Salvation” So saying “Oh yes I’ve got faith” is not enough, we must use the gift of faith the Lord has given to us, we must turn in repentance and actually use it to TRUST IN JESUS. “Put on the Lord Jesus Christ and ye shall be saved”

Romans 13:11-14 11  And do this, understanding the present time. The hour has come for you to wake up from your slumber, because our salvation is nearer now than when we first believed.
12  The night is nearly over; the day is almost here. So let us put aside the deeds of darkness and put on the armour of light.
13  Let us behave decently, as in the daytime, not in orgies and drunkenness, not in sexual immorality and debauchery, not in dissension and jealousy.
14  Rather, clothe yourselves with the Lord Jesus Christ, and do not think about how to gratify the desires of the sinful nature.

How do we put our faith to work? How do we use the gift of faith to trust in Jesus? We do it by RECEIVING Jesus as Lord and Saviour. John 1:12.

John 1:12 (NIV) “Yet to all who received him, to those who believed in his name, he gave the right to become children of God …”

Once Thomas had seen Jesus, at that moment his doubts vanished and he expressed the strongest faith, “My LORD, My God” Have you gotten to the point in your life where you don’t just believe it, but you KNOW it, that Jesus is YOUR LORD and YOUR GOD?

Conclusion: There are two types of faith: One is the physical proof type of faith, i.e. I need to see it first before I’ll believe. And there’s Biblical faith; Which is believing faith exercised by trusting in Jesus and His promises. Christian life is a walk of that kind of faith, constantly putting our trust in God’s promises, but once we do, we’re given amazing revelations and great joy.

Dear Lord Jesus Christ, I thank you so much for the gift of faith that You have given to me, and the fact that You helped me to use it to receive You as my Lord and Saviour; by turning from my sin in repentance, putting my faith in your death upon the cross for me and receiving You as my Lord and Saviour. Help me today to reach out to those who may know about You, but have yet to take that step of faith, those who’ve not yet received you as Lord. Fill me with Your LOVE and Compassion for them. Amen.

What a wonderful evening of prayer we had last night in church. We were dancing and proclaiming the Lord as KING of Kings and LORD of Lord’s as we prayed for the upcoming election. We prayed that the Lord would bless every future Member of Parliament with the gift of FAITH. Now I’m praying today, they won’t just have the gift of faith, but that they’ll use the gift of faith that God gives to them and put their trust in the Lord Jesus Christ as their King. Amen!

Have an amazing day with Jesus my friends.