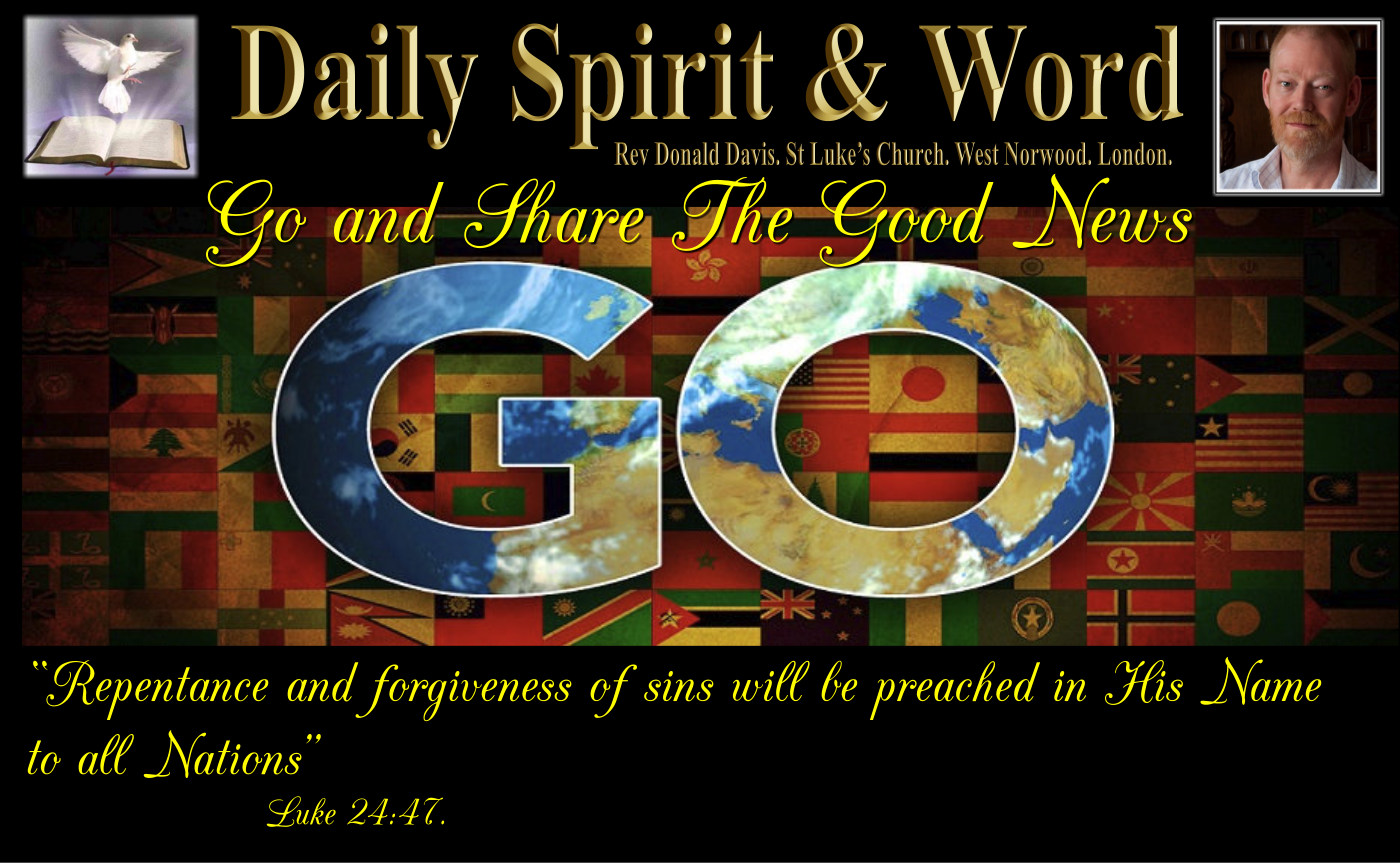 Good morning my friends, it’s been a strange start to the week. I’ve been feeling quite tired and in a bit of pain with back ache, however this morning as I was in the garden with the Lord, I believe He wants me to persevere in telling others about Him and about the best news they could ever want to hear. We’ve been following Jesus appearance to the two disciples on the Road to Emmaus over the last week, yesterday we saw how they knew it was Jesus when He broke the bread, today, after that revelation, we see those disciples running to spread the greatest news ever delivered, Jesus is Alive.

Luke 24:30-36 30  When he was at the table with them, he took bread, gave thanks, broke it and began to give it to them.
31  Then their eyes were opened and they recognised him, and he disappeared from their sight.
32  They asked each other, “Were not our hearts burning within us while he talked with us on the road and opened the Scriptures to us?”
33  They got up and returned at once to Jerusalem. There they found the Eleven and those with them, assembled together
34  and saying, “It is true! The Lord has risen and has appeared to Simon.”
35  Then the two told what had happened on the way, and how Jesus was recognised by them when he broke the bread.
36  While they were still talking about this, Jesus himself stood among them and said to them, “Peace be with you.”

I don’t know when the last time it was that you walked seven miles, but they’d just traveled that distance and as soon as they get their revelation, as soon as their eyes are opened and they recognise Jesus, they’re off, on their way back to Jerusalem again. It’s amazing!

We all know that good news spreads fast. When a baby is born or an engagement or wedding is announced, then the news spreads very fast these days, especially with the advent of social media; Facebook, G+, WhatsApp, etc… I’m constantly amazed what articles or posts that I put up get the most likes. If it’s a picture of my grandchildren, then everybody like it, if it’s a castle I’ve visited, then of Facebook it’ll get a few less likes, but when I spread the GREATEST NEWS that anyone could ever wish to hear, it get only a few likes and spreads very slowly at first. It seems that even devout and devoted Christians are reluctant these days to come out of the closet and let their friends know Just how much they LOVE Jesus. There are of course good reasons for that, but we’ll come onto that later.

However, no such thoughts occupied the minds of those who followed Jesus and their first encounters with the risen Lord. As soon as they got it, they wanted to share it. Like Mary Magdalene who ran to tell the disciples about the empty tomb, then later on about her meeting with the risen Lord. It was natural to want to tell others, those they knew would want to hear this great news, but before they could begin to be obedient to Jesus Great Commandment to Go and tell they whole world, they’d need something besides the resurrection appearances. You see Jesus knew and the disciples eventually knew, they’d need the anointing of the Holy Spirit if they were ever going to sustain their enthusiasm for sharing this Good News, because it’s NOT good news for everyone, but only for those who respond.

The day after I became a Christian, I was sharing this great news with everybody I knew; “I’ve become a Christian” I said with enthusiasm. Some people were happy for me, those that I knew to be Christians were overjoyed, my family and friends were happy for me, but I noted something almost immediately, there was a hint of hatred, a nasty feeling in some of their responses, “Don’t try and convert me though”… One of my best friends, whom I’d known for years, a good old drinking buddy, ridiculed me if front of the whole Submarine Crew. He shouted at the top of his voice as I was walking down the gang-plank towards the Submarine; “Here he comes, the Bible Basher. So you’ve become a Christian Ginge (That’s what they called me in the Navy). I know where you’re going mate and it’s not to Heaven, you’re going to Hell just like the rest of us.” I was totally shocked that my best friend would react in that way, I’d not even told him personally, he must have heard through the grapevine that I’d become a Christian, but here Jack was telling everybody that I’d become a Christian, and already he’d nicknamed me ‘Bible Basher’. I shouted back to Jack, “Yes Jack, I’ve become a Christian, a follower of Jesus Christ, I do believe I’m going to Heaven, but I’m so glad that you believe in Hell, I believe in that too, so your already half-way towards faith and becoming a Christian yourself”… That response got a chuckle and I was immediately thrown into the lions den of personal evangelism.

I’d began to tell everybody about Jesus, at first I was a bit too bombastic, telling everyone indiscriminately, but now the Lord guides me. I get it wrong sometimes and at times there are bad reactions to what I feel is still the best news anybody can ever want to hear, but that’s because most people are still in love with the pleasures of sin and a life of rebellion against the Holy and Righteous Lord, they will not come into the light. The Bible tells us why of course, but at first I couldn’t understand why everyone didn’t rush to trust in Jesus upon hearing the Good News.

It was in 1984 that I became a follower of Jesus, since then my passion for sharing the Good News has not died down. Nothing gives me greater pleasure than to share the Gospel one-to-one with even complete strangers, preaching about Jesus is now second nature to me, I’ve been given an amazing gift from the Lord to be able to talk with almost anyone about Him. I’ve learned ways to make it less offensive, but I’ve not watered down the message, I still proclaim the two alternative destinations; Heaven or Hell. However, I’ve learned the Secrets of the Kingdom of Heaven from Jesus and as I share them with people today, they are not as offended as my first attempts, that’s because I let them preach to themselves, I let their own conscience convict them and the Holy Spirit draw them to faith and trust in Jesus. Oh yes me friends, I go out every day looking and praying for opportunities to go and share the Good News with people. It’s not just the commandment, it’s because I love the Lord and I’m filled with compassion for those who’re headed for Hell.

Luke 24:44-49 44  He said to them, “This is what I told you while I was still with you: Everything must be fulfilled that is written about me in the Law of Moses, the Prophets and the Psalms.”
45  Then he opened their minds so they could understand the Scriptures.
46  He told them, “This is what is written: The Christ will suffer and rise from the dead on the third day,
47  and repentance and forgiveness of sins will be preached in his name to all nations, beginning at Jerusalem.
48  You are witnesses of these things.
49  I am going to send you what my Father has promised; but stay in the city until you have been clothed with power from on high.”

There are many people who’ll say, “I’ve not got the personality for that kind of evangelism”, but did you notice anything in Jesus commandments about personality? Did you see something in Jesus commission that will enable the shy, the awkward, the stumbly-speakers, the nervous and frightened to say to Him, “Lord, send someone else, because You don’t mean me, do You? After all Lord, You know that I’ve not got the personality for that kind of thing.” My friends, once we KNOW Jesus it will not be because He’s commanded us to share, but we’ll automatically do it. We’ll not do it because of our personality though, we’ll do it because we’ve been ‘”clothed with power from on high”. It’s the Supernatural Personality of Jesus that will be in us, the Holy Spirit POWER that will propel and enable us to share. So don’t worry about your shyness, your awkwardness, your lack of knowledge, your lack of ability, because He’s got everything you need and more, just waiting, all you need to do is be filled and empowered and obedient. So many Christians want the experience and fullness of the Spirit, but don’t realise that His fullness is only given for the purposes of building others up in the faith and leading others to faith and trust in Jesus, it’s not just for our own enjoyment of the experience.

Dear Lord Jesus Christ, thank You so much for the reality and wonder and joy of the greatest news the world can ever want to hear. I know that there are many people who don’t want to hear the good news, because they are in love with being in charge of their own lives, I’m praying today for everyone I know, who doesn’t know You Lord. Help me to bring the great news to them in the power of the Holy Spirit. Please Lord, I’m praying that you’ll open up their hearts and minds and lives to be responsive to the news and set free from Satan’s grip. In Your mighty name I pray Lord Jesus. Amen.